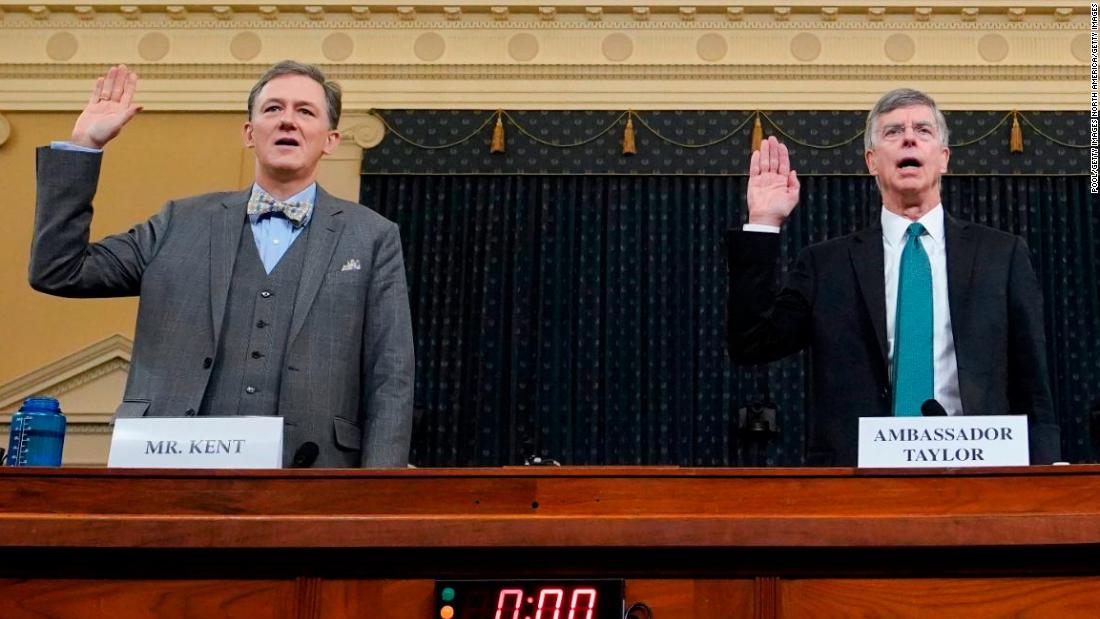 Diplomats Bill Taylor and George Kent testified Wednesday in the first public hearing in the impeachment inquiry into President Trump.

The diplomats testified for nearly six hours before the House Intelligence Committee.

Former US Ambassador to Ukraine Marie Yovanovitch's testimony today before the committee will be the second public hearing of the impeachment investigation.

Here are the biggest takeaways from Wednesday's hearing:

A US diplomat who overheard President Trump ask the US Ambassador to the European Union about the status of "investigations" during a cellphone conversation in a Kiev restaurant is set to appear before the House impeachment inquiry behind closed doors today.

David Holmes, the counselor for political affairs at the US Embassy in Ukraine, overheard the conversation between Trump and Gordon Sondland the day after Trump spoke with the Ukrainian president by phone in July, according to testimony Wednesday from Bill Taylor, the top US diplomat in the country.

About Holmes: Holmes is a career foreign service officer who arrived in Ukraine in 2017, according to a source who knows him and describes him as a "sharp guy." He joined the foreign service in 2002, according to the American Foreign Service Association, and has previously served in Kabul, New Delhi, Kosovo, Bogota, Moscow and Kosovo.

Holmes has also served as a special assistant for South and Central Asia to former Under Secretary of State for Political Affairs Bill Burns and spent time on the National Security Council staff at the White House as director for Afghanistan from 2011 to 2012.

As political counselor, his main job is to determine what is going on in Ukrainian politics.

The former US ambassador to Ukraine, Marie Yovanovitch, testified behind closed doors on Oct. 11 as part of the Democratic-run impeachment inquiry, giving critical information about her time in Ukraine and abrupt removal earlier this year.

In a 10-page statement obtained by The New York Times and The Washington Post, Yovanovitch defended her tenure and decried the "concerted campaign" to recall her from Ukraine, which she said is tied directly to President Donald Trump.

Here's a breakdown of three crucial lines from her statement:

Victim of "unfounded and false claims"

State Department "hollowed out from within" 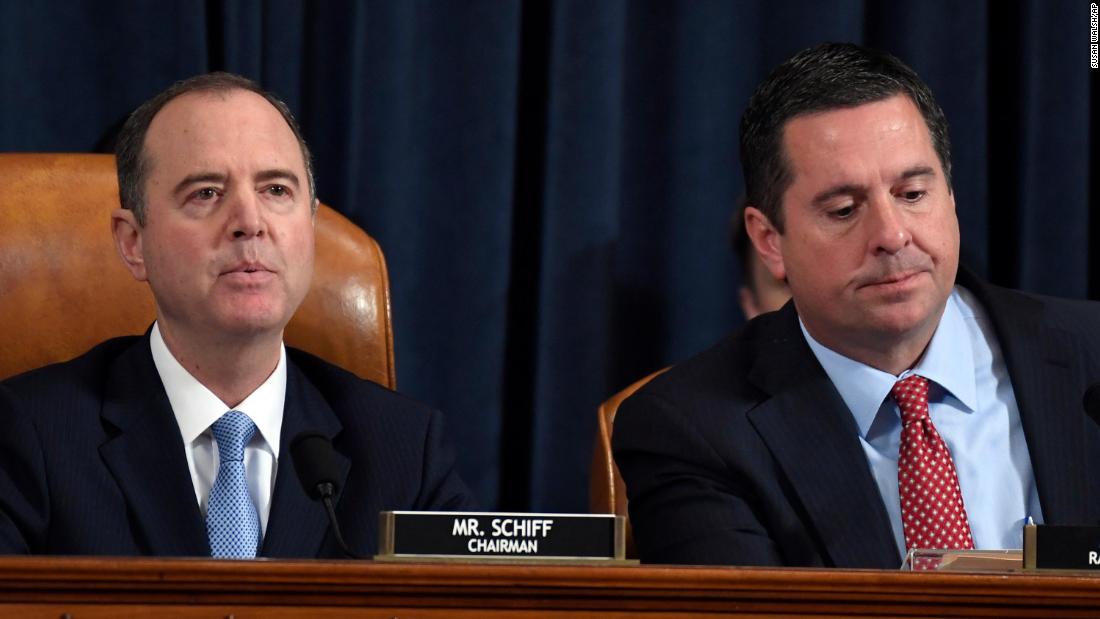 Former US Ambassador to Ukraine Marie Yovanovitch will appear today before the House Intelligence Committee for the second public hearing of the impeachment investigation.

The hearings before the committee look much different than the other major hearings of the last few years, and although there may be slight alterations for each hearing, the impeachment resolution passed last month lays out a baseline structure.

Ambassador Marie "Masha" Yovanovitch will testify today at the second public hearing in the impeachment inquiry into President Trump.

Yovanovitch -- "someone who has never been hungry for the spotlight," as one former State Department official described her -- has increasingly found herself there as new developments in the Ukraine controversy have come to light.

But the former top US diplomat in Ukraine, maligned as "bad news" by President Trump and and known by her diplomatic peers as "one of the best," will share her perspective publicly today on Capitol Hill as part of the impeachment inquiry.

Since being unexpectedly removed from her post in Kiev in May, Yovanovitch has become increasingly ensnared at the center of the widening scandal.

"I would imagine for her this is pretty much worse than her worst nightmare in that not only are you being publicly criticized and condemned by your head of state but also the idea of all of this public attention. She's a pretty reserved person," the official told CNN.

Trump personally ordered Yovanovitch's removal, according to The Wall Street Journal. She was accused without evidence by Rudy Giuliani -- a former New York mayor and Trump's personal attorney -- and others of trying to undermine the President and blocking efforts to investigate Democrats like former Vice President Joe Biden.

Trump has twice disparaged Yovanovitch -- once in early October at the White House and another time in his July 25 call with Ukrainian President Volodymyr Zelensky.

"The former ambassador from the United States, the woman, was bad news and the people she was dealing with in the Ukraine were bad news so I just want to let you know that," Trump said to Zelensky, according to a rough White House transcript.

Diplomatic support: The diplomatic community has rallied behind Yovanovitch since the contents of Trump's call were disclosed, and some former diplomats have also called for the State Department and Secretary of State Mike Pompeo to lend their public support to the career foreign service officer.

Retired US Ambassador Nicholas Burns called for "the higher levels of the State Department" to "come out and defend her."

"They should say she was a good ambassador, she did what was asked. She did what her constitutional duty asked her to do, represent the United States ably and honorably," Burns told CNN. "She deserves an apology, a public apology."