After President Trump tweeted attacks on ex-ambassador to Ukraine Marie Yovanovitch as she was testifying, House Intelligence Chair Adam Schiff suggested it could be witness intimidation.

"Ambassador, you've shown the courage to come forward today and testify. Notwithstanding the fact that you were urged by the White House or State Department not to, notwithstanding the fact that as you testified earlier the President implicitly threatened you in that call record, and now the President — in realtime — is attacking you. What effect do you think that has on other witnesses willingness to come forward and expose wrongdoing?"

"It's designed to intimidate, is it not?" Schiff asked.

While the hearing was on a brief recess, Schiff told reporters it was "intimidation in real time by the President of the United States."

Some background: As Yovanovitch testified this morning, Trump tweeted attacks against her, saying, "Everywhere Marie Yovanovitch went turned bad." He specifically pointed to her work in Somalia — which she described in her opening statement. (Remember: The White House said President Trump would watch Rep. Devin Nunes' opening statement — but not any of the rest of today's hearing.)

The Democrats’ attorney, Daniel Goldman, brought up Fox News in a series of questions about articles with allegations about Ukraine and former US Ambassador to Ukraine Marie Yovanovitch.

He said the allegations were that she "bad-mouthed the President and had given the prosecutor general a do not prosecute list," as well as allegations about Ukrainian interference in the 2016 election, the Bidens and Burisma.

Goldman went on to display this tweet from President Trump.

Goldman then quoted a tweeted from Donald Trump Jr.'s: "We need more ⁦@RichardGrenell’s and less of these jokers as ambassadors."

Yovanovitch said the articles appeared to be promoted by Trump's personal attorney Rudy Giuliani. She went on to say she was aware of the tweets, and "was worried."

"These attacks were, you know, being repeated by the President himself and his son," she said.

Goldman then asked if she was aware the allegations received attention on Fox News. She said she was.

Asked if anyone in the State Department raised concerns about the allegations, she said, "No. I mean, people thought it was ridiculous."

The hearing is in recess for just a few minutes.

Marie Yovanovitch, the former US envoy to Ukraine, offered a powerful and impassioned defense of the work the US foreign service in the face of attacks from the President of the United States and his allies and minimal public defense from the secretary of state.

Contrasting the “perception that diplomats lead a comfortable life throwing dinner parties in fancy homes,” Yovanovitch described her own tenure in the foreign service: moving 13 times, serving in five hardship posts, getting caught in crossfire in Russia.

She also offered a cutting criticism of the State Department’s failure to defend her against smears, including from President Trump.

“I remain disappointed that the Department’s leadership and others have declined to acknowledge that the attacks against me and others are dangerously wrong, she said. “This is about far more than me or a couple of individuals. As Foreign Service professionals are being denigrated and undermined, the institution is also being degraded. This will soon cause real harm, if it hasn’t already.”

She continued: “It is the responsibility of the Department’s leaders to stand up for the institution and the individuals who make that institution the most effective diplomatic force in the world,” Yovanovitch continued.

“I count myself lucky to be a Foreign Service Officer, fortunate to serve with the best America has to offer, blessed to serve the American people for the last 33 years,” she said.

Yovanovitch said the attacks led to a "crisis" at the State Department.

"Moreover, the attacks are leading to a crisis in the State Department as the policy process is visibly unravelling, leadership vacancies go unfilled, and senior and midlevel officers ponder an uncertain future and head for the doors. The crisis has moved from the impact on individuals to an impact on the institution. The State Department is being hollowed out from within at a competitive and complex time on the world stage. This is not a time to undercut our diplomats," she said.

On the rumor that there was Ukrainian interference in the 2016 US presidential election, which has been widely debunked, Yovanovitch echoed these conclusions saying there was "nothing hard" linking Ukraine to election interference.

Asked who was responsible for interfering and meddling in the 2016 election, Yovanovitch said:

"Well, the U.S. Intelligence community has concluded that it was Russia."

He specifically pointed to her work in Somalia. (Remember: The White House said President Trump would watch Rep. Devin Nunes' opening statement — but not any of the rest of today's hearing.)

House Intelligence Chair Adam Schiff just gave her an opportunity to respond. Here's what she said:

"Well, I mean, I don't think I have such powers, not Mogadishu, not Somalia, and not other places. I actually think where I have served over the years, I and others have demonstrably made things better. You know, for the US, as well as for the countries that I have served in."

House Democrats are trying to use Trump’s tweets against him. They displayed one of his tweets on a screen in the hearing room, a tweet where he posted about an article in The Hill that included allegations against Yovanovitch. The series of articles have been widely discredited in recent months.

Democratic staff lawyer Dan Goldman used that tweet, and another about the same topic from Donald Trump Jr., to show how Yovanovitch’s reputation was attacked before she was ultiamtely removed from Ukraine. Witnesses have said that the false allegations in The Hill, which were also pushed by Rudy GIulinai, were apparently the driving force behind Trump’s decision to end her ambassadorship.

“People thought it was ridiculous,” Yovanoavitch said of the allegations against her.

In a tweet sent during questioning of Yovanovitch, Trump said “the new Ukrainian President spoke unfavorably about her in my second phone call with him.”

Facts First: Volodymyr Zelensky did say Yovanovitch’s attitude was “far from the best” — but spoke about her only after Trump brought her up.

Additionally, according to the transcript of the call released by the White House, Zelensky noted that Trump was the one who first told him she was “a bad ambassador.”

Zelensky said, “It was great that you were the first one who told me that she was a bad ambassador because I agree with you 100%.” 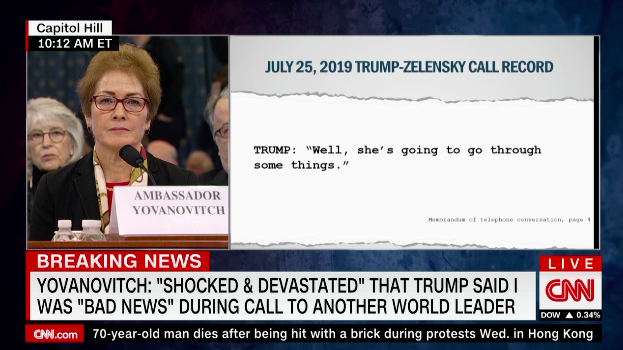 Marie Yovanovitch was read parts of the transcript from Trump's July 25 call with Ukraine President Volodymyr Zelensky by House Intel Majority attorney Dan Goldman. Asked what she thought about Trump saying "she's going to be going through some things," she said it sounded like a threat.

"'She's going to go through some things.' It didn't sound good. It sounded like a threat," Yovanovitch said.

Goldman followed up and asked, "Did you feel threatened?"

"I did," Yovanovitch said.