At Southwest Key Campbell children’s facility, Melania Trump visited with staff and then spent time with children and babies in three different rooms.

Of the 121 children at this shelter, 81 have been separated from their parents at the border. The rest of the children were unaccompanied minors or brought into the US by other people.

Trump entered the first classroom, which had 10 small children, split by boys and girls at two tables. “Hi! How are you?” she said, in English. Teachers in the room translated as Trump asked ages and names and what they were making — they were doing an arts and crafts project making dogs.

“Did you make friends?” Trump asked the children.

The next classroom was again approximately 10 kids, ages 5 to 7, who were doing an exercise with a teacher pointing out change. The kids here spend approximately six hours a day in classroom settings.

Trump walked in saying, “Wow! Hi!” She also asked one girl about her friends.

The final room was perhaps the most emotionally taxing — all babies and toddlers, most under 18 months old. Three of the babies were there with their mothers, who were also minors.

Trump spent about 10 minutes playing with the babies and asking questions about the facility to the workers. One baby in a crib slept through the whole thing.

Ricardo Obando captured this video of protesters marching and chanting on Constitution Avenue, on their way to Capitol Hill.

This was shot around 2:30 p.m. ET, before more than 100 of the protesters were arrested.

Sen. Tammy Duckworth, a Democrat from Illinois, visited protesters rallying against immigration policy Thursday in the middle of the Senate office building. She had her infant daughter with her, and the two received a rockstar welcome from the protesters.

She said the issue of family separations is "deeply personal" to her. 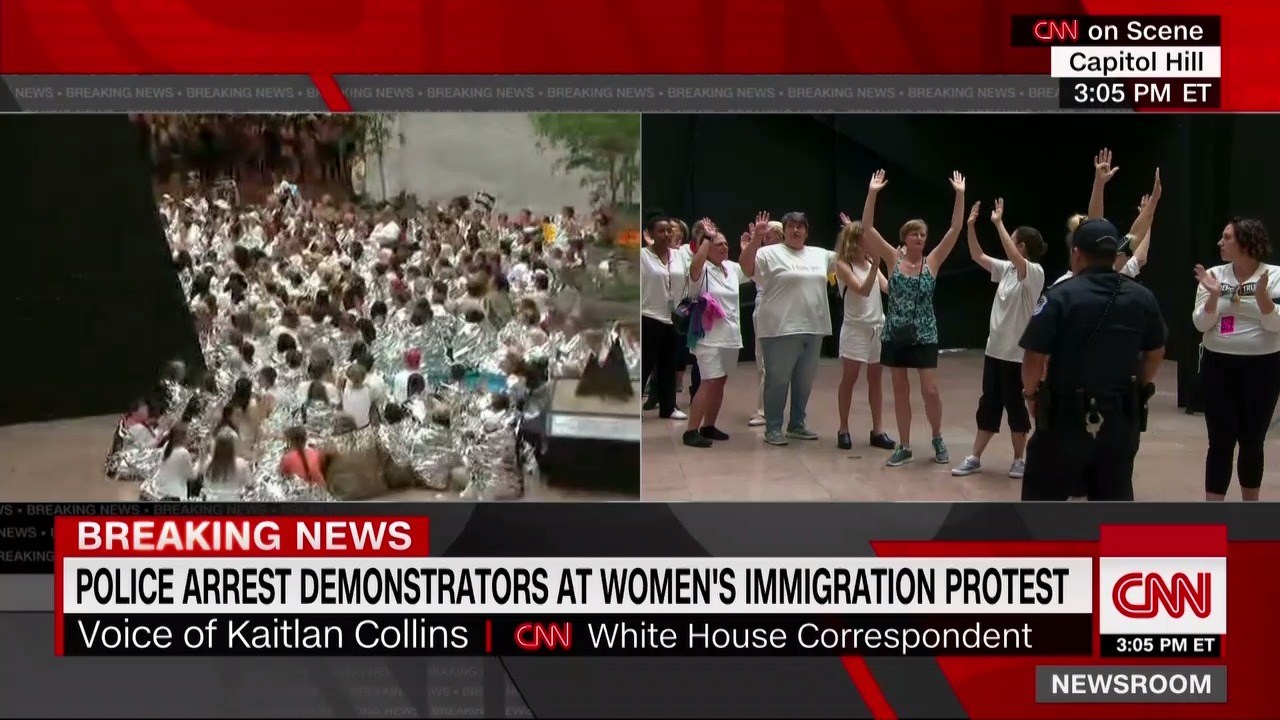 Capitol police have threatened to arrest a crowd of women who had gathered on Capitol Hill to protest President Trump's immigration policy.

The incident began when the protesters, who earlier attended a march and rally organized by the Women's March, flooded a Senate office building while chanting, "We care" -- a reference to first lady Melania Trump's "I really don't care. Do U?" jacket that she wore before and after visiting the young children being held near the southern border last week.

Some of the women were also wearing the the foil-style thermal blankets that detained immigrants were seen wearing in government footage earlier this month.

As the women were being escorted away by police, Sen. Mazie Hirono, a Hawaii Democrat, approached them and appeared to introduce herself.

CNN's Sunlen Serfaty, who is reporting from the protest, said she was also asked to leave.

Protesters have rallied in Brownsville, Texas, near the US border to demand an end to family separations.

They've come from across Texas: Buses brought protesters into the border town from Dallas, Houston and other cities.

"They bussed in people who have never taken part in these sort of rallies. Today, upset by what they see on their televisions and read about in the newspapers, about children being taken by their families. So they're coming out here, taking a stand."

A group of women marching against family separations in Washington, DC, are protesting with song.

Kai Newkirk, activist and co-founder of Democracy Spring, captured the song on video.

Here's are the lyrics:

Demonstrators have gathered near the border in Brownsville, Texas, to rally against President Trump's immigration policies.

Mia Gibson, 6, attended with her mother, Alejandra Caballero, and carried a hand-drawn poster that read, “Kids need their parents.”

Mia said she and her mother came to the protest “to help kids."

Caballero said her daughter doesn’t fully understand what is going on — but she added that Mia feels sad for the kids that have been separated from their parents.

Protesters demanding an end of immigrant family separations gathered outside of the Department of Justice in Washington DC on Thursday with one question:

The Trump administration has more than 2,000 children it separated from their parents in its custody.