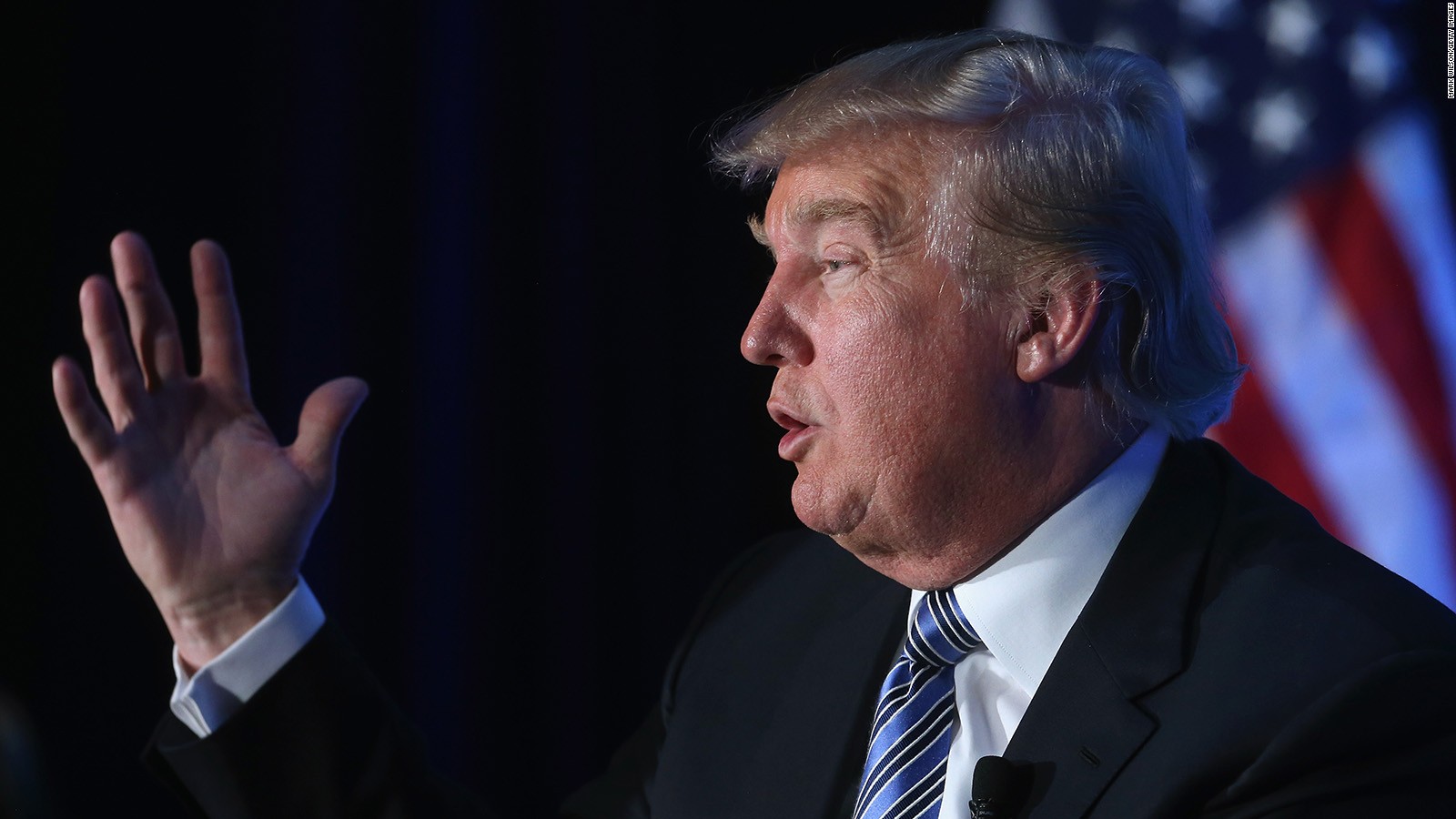 President Trump again blamed Democrats on the issue of illegal immigration, saying immigrants “continue to pour into and infest our country, like MS-13.” Trump went on to say that Democrats view immigrants as “potential voters.”

(The President has previously called sanctuary cities "infested" with crime.)

The President also tweeted about immigration in Germany, falsely claiming that crime is up since the country began accepting more migrants. (It's not.)

He also included this tweet, repeating a phrase he's often said in office and on the campaign trail:

“Kirstjen Nielsen has misled the Senate, from the White House podium, and the American people about the Trump Administration’s cruel policy of separating children from their parents at the border,” Smith wrote in a campaign email. “And, as Secretary of Homeland Security, she has overseen the pain that has been done to thousands of families in the process. She can no longer be trusted in this role."

The email comes one day before President Trump is scheduled to travel to Minnesota.

Smith joins two other Democratic senators in calling for Nielsen's resignation. Here's what they said yesterday:

"If she's going to tell whoppers like that and keep repeating them, then she simply needs to step down. We need somebody there with integrity."

"The government should be in the business of keeping families together, not tearing them apart ... And the government should have a commitment to transparency and accountability. Under Secretary Nielsen's tenure, the Department of Homeland Security has a track record of neither. As a result, she must resign."

A coalition of 21 attorneys general are calling on officials in Washington to end the Trump administration's “cruel and illegal attacks on children and families lawfully seeking asylum in the United States as they seek protection from domestic, sexual, and gang violence,” according to a release from the New York attorney general who is a part of that coalition.

In a letter to US Attorney General Jeff Sessions and Department of Homeland Security Secretary Kirstjen Nielsen, the coalition expresses strong opposition to the “zero tolerance” policy that results in the separation of thousands of children from their families.

“The Trump administration is tearing children away from their parents just to further a draconian political agenda. This is not only inhumane and totally unconscionable – it also undermines our public safety,” New York Attorney General Barbara Underwood said in a statement.

The letter was led by New Mexico Attorney General Hector Balderas and signed by the attorneys general of the District of Columbia and 19 states...

Outraged over the separation of children from their parents at the border, activists are planning protests throughout the country today.

"It's a big, coordinated strategy to result in tearing, well, children away from their parents to send a political message, or to create legislative leverage," he said tonight. "That is not acceptable under any moral code, to hurt children and parents in that fashion."

"We need somebody there with integrity," he said. 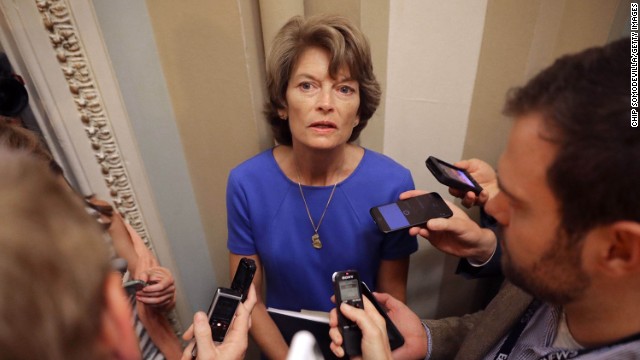 Sen. Lisa Murkowski, a Republican from Alaska, just issued a statement calling on the White House to "end the cruel, tragic separations of families" at the southern border.

Here's her statement, which she tweeted: 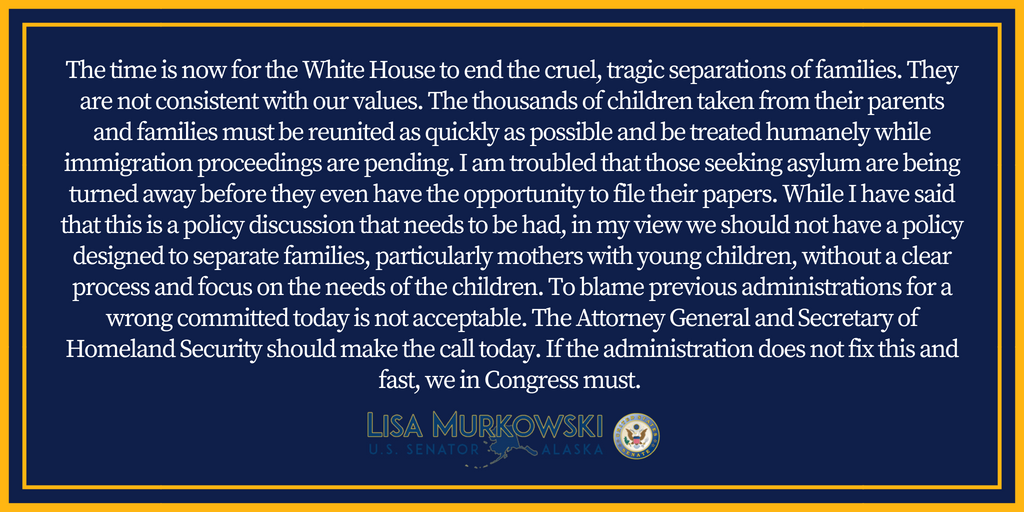 CORRECTION: We originally said Lisa Murkowski is a senator from Maine. She is from Alaska. 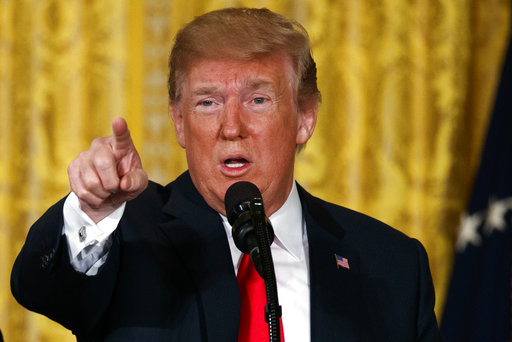 Republican Sen. Richard Shelby said that his meeting today with President Trump and Republican Sen. Shelley Moore Capito focused on border security and wall funding but not on the family separation policy.

“We talked about funding, how we can hopefully make a down payment on the funding of the wall,” he said. “The President is determined, and I agree with him, that we should protect the border.”

Shelby said the meeting did not include a broader immigration reform discussion.

“It was focused solely on building the wall and securing the border. We didn’t get into the merits or substance of the immigration challenge.”

Asked about the President’s assertions both on the campaign trail and since becoming president that Mexico would pay for the wall, Shelby said, “Well, who knows? They might before it’s all over with. He says they are. We’ll see.”

Shelby said the Homeland Security Appropriations bill, which will be marked up Tuesday, will include $1.6 billion for border security construction. This is the amount the administration requested.

Shelby described the family separation issue playing out of the border as "heart wrenching."

“When you separate children from their families," he said. "That’s a tough situation anywhere in the world. We know that. Its complex. Its heart wrenching. Let’s see where we go.”

Department of Homeland Security Secretary Kirstjen Nielsen responded to criticism from multiple former first ladies to the administration's zero tolerance immigration stance, remarking that it is a serious issue but one that should be handled by Congress.

“What my response would be is calling attention to this matter is important,” Nielsen said from the White House briefing room Monday. “This is a very serious issue that has resulted after years and years of Congress not taking action, so I would thank them both for their comments."

Nielsen added: "It’s not a policy. Our policy at DHS is to do what we’re sworn to do, which is to enforce the law."

Asked specifically about the Japanese internment remark from former first lady Laura Bush, Nielsen said, “What I believe is that we should exercise our Democratic rights as Americans and fix the problem. It’s a problem. Let’s fix it.”

The Mormon Church just issued a statement on border family separations, stating that "immigration reform should strengthen families and keep them together," and that the separations at the southern border were "harmful to families, especially to young children."

"The Church of Jesus Christ of Latter-day Saints has long expressed its position that immigration reform should strengthen families and keep them together. The forced separation of children from their parents now occurring at the U.S.-Mexico border is harmful to families, especially to young children. We are deeply troubled by the aggressive and insensitive treatment of these families. While we recognize the right of all nations to enforce their laws and secure their borders, we encourage our national leaders to take swift action to correct this situation and seek for rational, compassionate solutions."