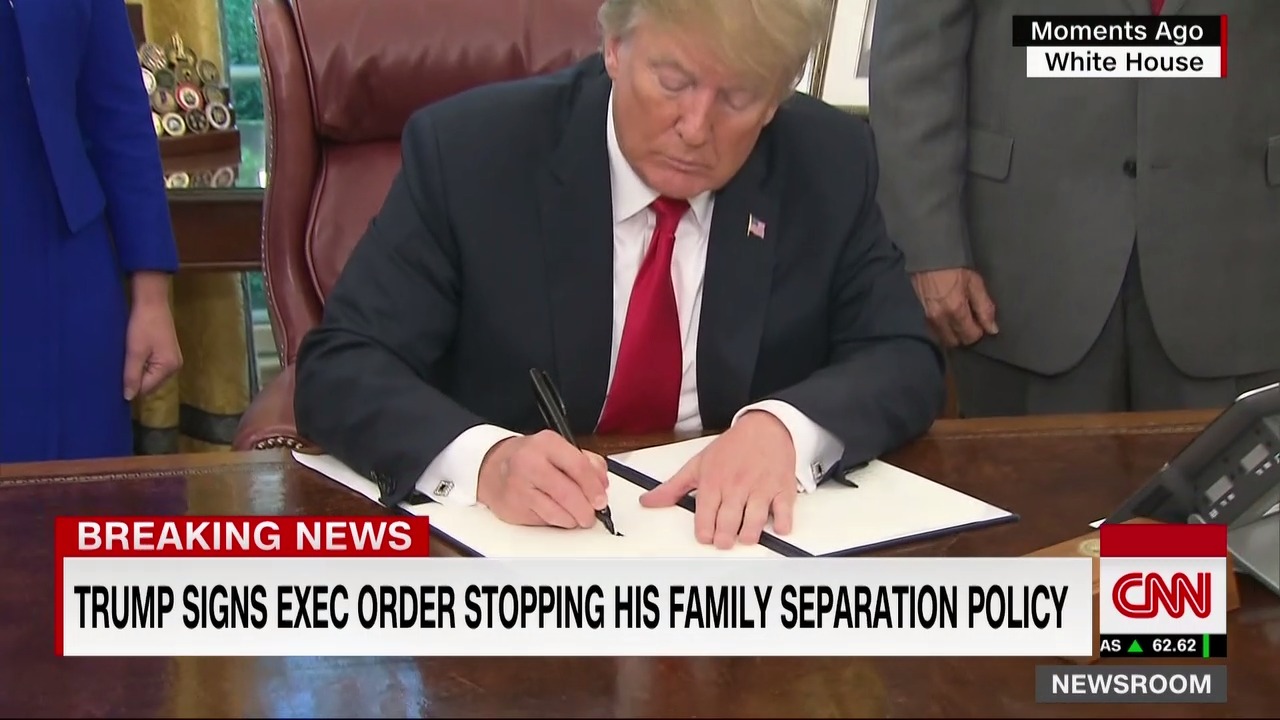 President Trump has signed an executive order “about keeping families together while ensuring we have a powerful border."

"We are keeping families together," Trump said from the Oval Office while flanked by DHS Secretary Kirstjen Nielsen and Vice President Mike Pence.

"This will solve that problem. At the same time, we are keeping a very powerful border and it continues to be a zero tolerance. We have zero tolerance for people who enter our country illegally," he said.

What just happened: President Donald Trump officially reversed his debunked argument that he had no authority to stop separations of undocumented immigrant families at the border.

Trump's climbdown came after he faced intense pressure from across the political spectrum and from religious, political and world leaders to halt the separations, which produced days of heart-rending news coverage of crying children some of whom were kept in cage-like detention centers.

Watch the signing and remarks:

American Airlines and United Airlines both told the federal government to stop using their planes to transport children who have been separated from their families at the US-Mexico border, after a Facebook post went viral claiming they were doing just that.

American said it has no way of knowing for sure whether its aircraft has been used to transport migrant children who have been separated from their families, and United said research failed to reveal any evidence separated children were being flown on their planes.

Still, stories of distressed migrant children being transported on airplanes were spreading, and the airlines chose to respond.

How the government is responding: The Department of Homeland Security criticized the airlines' requests to not partner with the agency, saying the partnership was a way to "swiftly reunite unaccompanied illegal immigrant children with their families." Tyler Houlton, press secretary for the Department of Homeland Security, also tweeted, “Despite being provided facts on this issue, these airlines clearly do not understand our immigration laws and the long-standing devastating loopholes that have caused the crisis at our southern border.”

How all of this started

The news coverage of the border crisis and family separations has included stories of wailing cries from children asking for their parents, harsh living conditions and understaffed facilities, sparking waves of outrage against the policy.

But then a Facebook post began circulating last week that claims to be the story of a flight attendant on an unnamed airline who watched 16 migrant children dressed in Walmart sweats board a flight from Arizona to Miami just after midnight.

CNN has not confirmed the veracity of the Facebook claim.

A source familiar with the upcoming executive order on family separations says it will not end the "zero-tolerance" policy that is prompting the border separations.

It will be more narrowly focused on ending the family separations by allowing families to be detained together.

This source noted that it's not yet clear how the families that are currently separated will be reunited.

Canadian Prime Minister Justin Trudeau called the family separations happening on the US-Mexico border "wrong" and said it's not how Canada would handle the situation.

"What's going on in the United States is wrong. I can't imagine what the families living through this are enduring. Obviously, this is not the way we do things in Canada," he said.

An executive order allowing families to stay together could pose a legal problem for the administration if it decides to detain families as units.

Indefinite detention of minors would violated the Flores Settlement because it requires release to the "least restrictive environment" within 20 days.

If the President acts, it will be challenged immediately.

For instance, the parties that secured the Flores Consent decree would go back to the district court and argue that the government is in violation of the court order.

Former President Barack Obama marked World Refugee Day with a lengthy Facebook post about the border crisis happening in the US right now.

"To watch those families broken apart in real time puts to us a very simple question: are we a nation that accepts the cruelty of ripping children from their parents’ arms, or are we a nation that values families, and works to keep them together? Do we look away, or do we choose to see something of ourselves and our children?" Obama wrote.

The former President said all Americans, no matter where their families came from, "are only here because this country welcomed them in."

"To be an American is to have a shared commitment to an ideal – that all of us are created equal, and all of us deserve the chance to become something better,"

President Trump, speaking with members of Congress at the White House, addressed the border crisis, saying he would sign something soon that keeps families together.

However, he said if a President is "weak," then "millions" of people could pour into the country.

This came in response to Sen. Lindsey Graham calling the immigration policy "a mess." 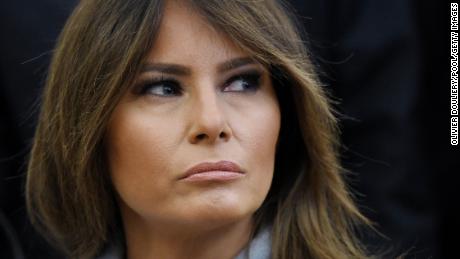 First lady Melania Trump has been working for several days behind the scenes, encouraging the President to keep families together, a White House official tells CNN.

Melania has had several private conversations with her husband, pushing him to do all he can to keep families at the border intact, whether via a legislative route, or acting alone to stop the process.

Earlier this week, Melania made a rare statement on a a policy issue to address the immigration crisis.

"Mrs. Trump hates to see children separated from their families and hopes both sides of the aisle can finally come together to achieve successful immigration reform," her communications director, Stephanie Grisham, told CNN. "She believes we need to be a country that follows all laws, but also a country that governs with heart."

Justice Department officials have been huddled up since this morning, working on executive order for the President to sign that will address the separation of families, according to a source familiar with the plans.

This is the typical process with executive orders, as it requires a number of moving parts legally and the input of the Office of Legal Counsel.

What exactly the EO will say is still being worked out, with ongoing conversations between the White House, the Justice Department and Homeland Security, the source said.

While Attorney General Jeff Sessions is not at the meeting at the White House, his chief of staff has been there to represent the Justice Department, the source added.

Additionally, a senior administration official tells CNN that Homeland Security Secretary Nielsen has been at the White House all morning in the room with the President and key staff, calling her a “key player” who was urging for action to be taken.

The administration is still pushing for congressional action, the senior official said, and is looking at the Flores settlement, which prohibits children with their families from being detained longer than 20 days.

“We want the ability to be able to detain and remove families swiftly,” the official said, declining to go into details of the order.