Attorney General Jeff Sessions addressed the issue of family separations during an interview that will air on the Christian Broadcasting Network's 700 Club.

“It hasn’t been good and the American people don’t like the idea that we are separating families. We never really intended to do that," he said.

Sessions said: “What we intended to do, was to make sure that adults who bring children into the country are charged with the crime they have committed. Instead of giving that special group of adults immunity from prosecution, which is what, in effect, what we were doing. So I think it’s the right thing. We’ll work our way through it and try to do it in the most compassionate way possible.”

Some background: On May 7 — the day the policy was publicized — Sessions said, “So, if you cross the border, unlawfully, even a first offense, we're gonna prosecute you ... If you're smuggling a child, we're gonna prosecute you, and that child will be separated from you probably, as required by law. If you don't want your child to be separated, then don't bring them across the border illegally. It's not our fault that somebody does that.”

Sessions interview with CBN will air on Friday and Monday.

The Department of Defense has received a request from the Department of Health and Human Services to be prepared to house up to 20,000 unaccompanied children on US military bases, according to a US Defense official.

Congress has been notified of the request by HHS, the official said.

It is expected that DOD will fulfill this requested if required.

Secretary of Defense James Mattis on Wednesday said the military will “support whatever” the Department of Homeland Security needs when it comes to housing undocumented immigrants.

“We’ll see what they come in with," Mattis said. "We support DHS and right now this is their lead and we’ll respond if requested.”

First lady Melania Trump has created by stir by wearing a jacket as she boarded her Air Force plane this morning with the printing "I really don't care. Do U?" on the back.

She wore the olive-colored Zara jacket as she climbed out of her motorcade and onto the flight to McAllen, Texas. She did not wear the jacket at all during the trip in Texas.

"It's a jacket. There was no hidden message. After today's important visit to Texas, I hope the media isn't going to choose to focus on her wardrobe."

The Justice Department sought to modify a federal court order Thursday that limits the ability of US officials to detain immigrant children longer than 20 days.

The move -- part of its execution of President Trump’s new executive order to keep families together -- will likely prove an uphill climb for DOJ officials, as the request has already previously been denied under the Obama administration.

Here's the crux of the legal issue: It stems from a 1997 settlement agreement in Flores v. Reno and subsequent rulings limiting the detention of children to 20 days.

“Irrespective of the Court's decision in Flores, it is incumbent for Congress to finally act to keep families together, end catch and release, and create the foundation for an immigration system that serves the national interest,"a DOJ spokesman said.

DOJ lawyers want US District Court Judge Dolly Gee in California to modify that rule to give the Trump administration maximum flexibility to detain families — not only until their criminal proceedings conclude, but through the end of any asylum proceedings, which could potentially drag on for many months.

President Trump insisted the US requires a "very tough policy" on illegal immigration on Thursday when asked about a report his administration would stop prosecuting migrant parents who cross the border illegally.

"We have to have a very tough policy," he said. "We have no choice."

He said unless the US has a strong border, "millions and millions" of undocumented immigrants would flood into the country.

"Without borders you don’t have a country," he said.

Why Trump is addressing those concerns

CNN's Polo Sandoval, who's in McAllen, Texas, reported that 17 Central American men and women were brought in to a courtroom Thursday to be charged for illegal entry into the US. But that never happened.

Instead, the assistant US attorney dropped the charges against those men and women, without explanation. They were then transferred to a detention center.

An attorney and several sources told CNN their children were already taken away.

Attorney Carlos Garcia told CNN that he believes the administration's new policy likely played a role in the decision in court today.

"They're changing things on the fly," Garcia said.

Whip Steve Scalise made the case for delaying the vote last night - and he lost the argument, per multiple aides. Paul Ryan knew where this was headed and just wanted to have the vote and move on.

But at the first vote series today, it became very clear that rank-and-file members were a mix of confused and uncomfortable with what they knew about the compromise bill.

Scalise seized on this and took it back to leadership and made the case again. For purely member management reasons — not eventual passage reasons — the decision was made to give it another day.

To be clear, there is no expectation this will pass tomorrow. This is about addressing member concerns (and little future leadership race gamesmanship too.) 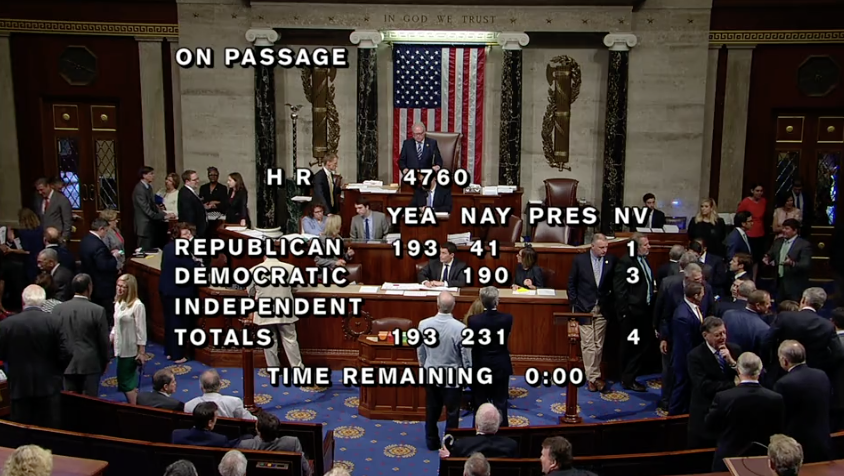 As expected, the U.S. House of Representatives failed Thursday to pass an immigration bill that was favored by conservatives and known as the Goodlatte bill after House Judiciary Chairman Bob Goodlatte.

With no Democrats voting for the bill, Republicans were going to need enough of their own members to get to a majority, but they failed to cross that threshold.

The House was originally scheduled to vote later this afternoon on the so-called compromise bill (the second of the two immigration bills), but CNN's Hill team reports the vote will be delayed until tomorrow as Republicans take more time to consider the bill.

First lady Melania Trump's plane has taken off from McAllen, Texas, after a short visit that included a stop at a children's holding facility.

She met with children at the facility, and with administrators. A second planned stop at a border facility was canceled due to flash flooding in the area.

House leaders will brief the full GOP conference on the “compromise bill” — the more moderate of the two immigration bills in the House — later this afternoon, and a vote delay is likely, an aide tells CNN.

The House was expected to vote on the compromise bill later this afternoon.

The vote, 226-195, with all Democrats voting against the resolution, was procedural, setting up the debate for the bill itself.

While the House voted to move forward with the bill, it is expected to fail in the final vote, which is scheduled to take place early this afternoon.