President Trump said that he's planning an "alternative" to the State of the Union address — but he gave no details.

The address was originally scheduled for Tuesday, but was delayed by Speaker of the House Nancy Pelosi.

This is what Trump told reporters:

"It’s a sad thing for our country. We’ll do something in the alternative. We’ll be talking to you about that at a later date." 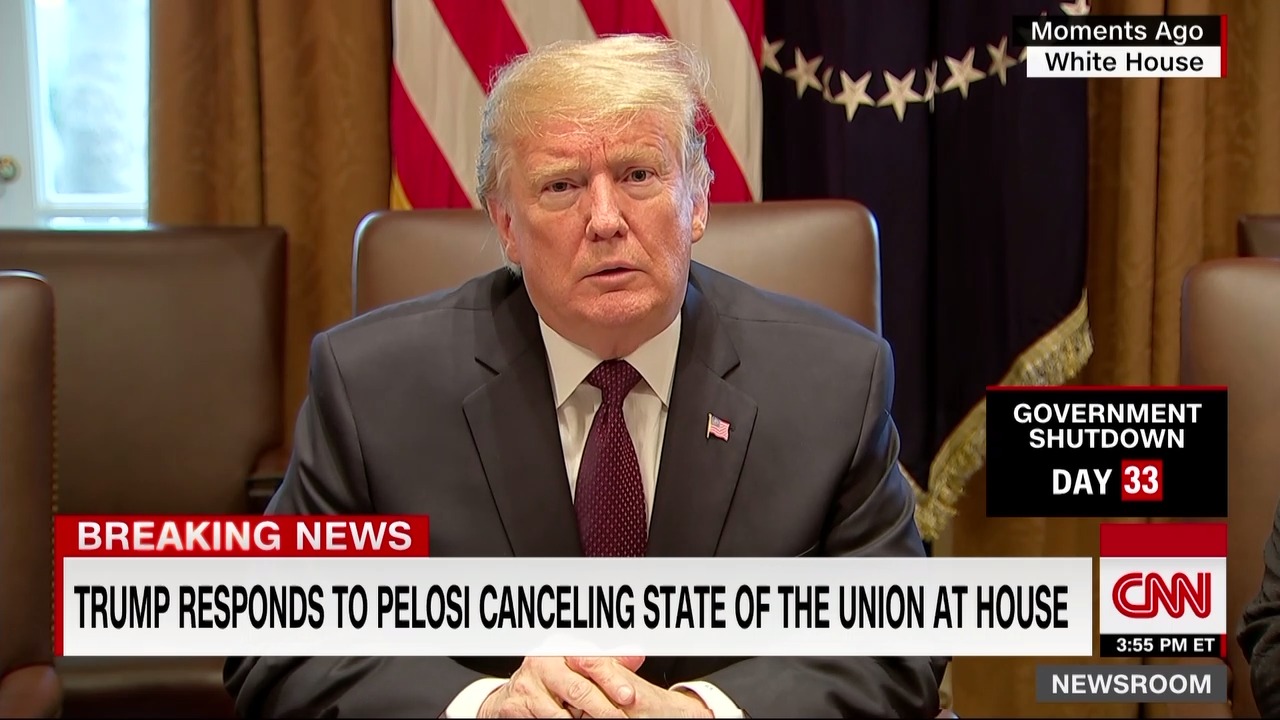 President Trump, talking about Speaker of the House Nancy Pelosi's decision not pass a resolution to hold the State of the Union on Tuesday in House chambers, called it a "great blotch" on American history.

He added: "I think it's a great blotch on the incredible country that we all love. It's a great, great, horrible mark. I don't believe it's ever happened before, and it's always good to be part of history but this is a very negative part of history."

The House passed a package of six full-year appropriations measures to reopen the shuttered portion of the federal government.

The vote was 234-180. The White House issued an explicit veto threat against the bill, so it's unlikely to pass.

The package includes a short-term stop gap extension for a seventh bill, the Department of Homeland Security measure that has been at the center of the shutdown fight over the border wall. The bill would include $1.6 billion in additional border security funding previously negotiated by bipartisan members of the House and Senate through other package of the bill outside of DHS funding.

The bill is the 10th measure passed by House Democrats to reopen the government since they took control of the chamber on Jan. 3. The Republican-controlled Senate has yet to take up any of the measures, all of which President Trump has said he opposes.

What we're watching: The Senate will hold two procedural votes Thursday on competing proposals, including one of the House-passed bills that would reopen the shuttered government agencies until Feb. 8, and include more than $12 billion in disaster aid. That bill is not expected to pass.

One thing to note: The House on Thursday will separately consider a stop-gap bill to fund the Department of Homeland Security at current levels through Feb. 28.

President Trump just issued a veto threat on two House spending bills, backed by Democrats, to reopen the government because it did not address border security.

Instead, the White House said in a statement it was supporting a Republican-backed measure that includes funding for border security and Trump's long-promised wall.

"Presenting these bills to the President without a broader agreement to address the border crisis is unacceptable. The Administration believes the package under consideration in the Senate — the End the Shutdown and Secure the Border Act —constitutes such an agreement, and supports its passage as quickly as possible," the White House said in the statement. 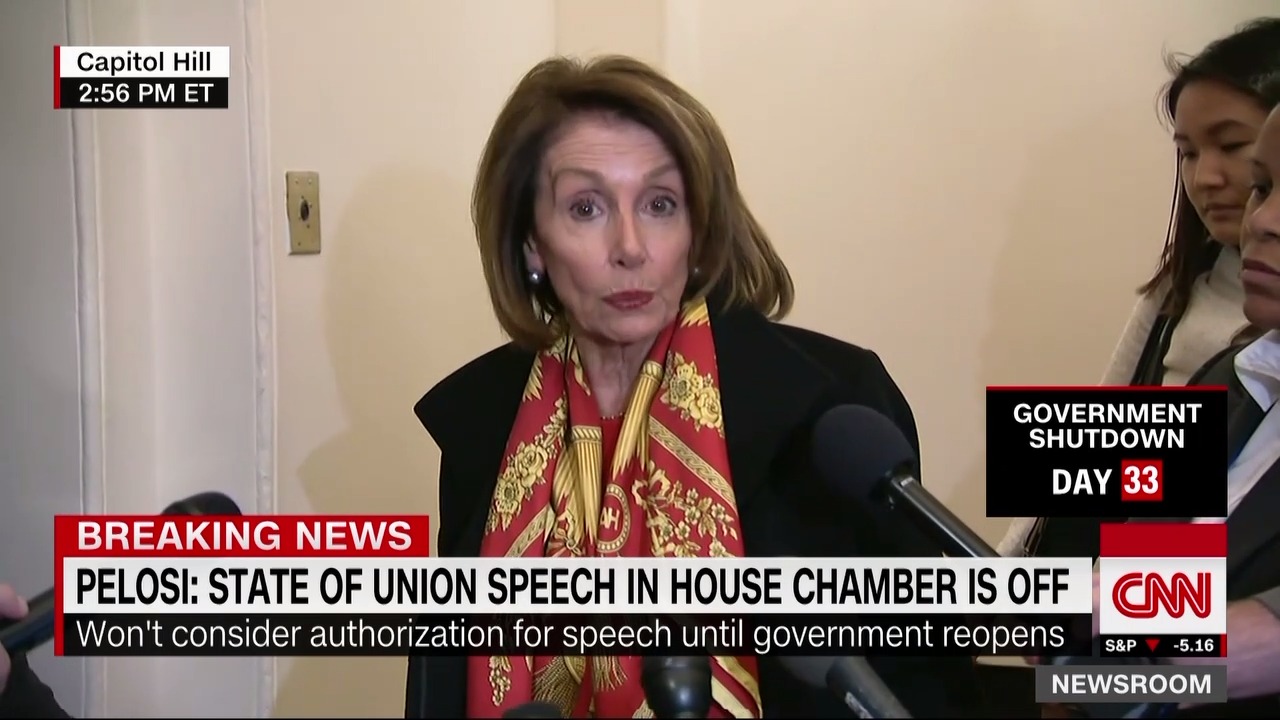 Speaker of the House Nancy Pelosi, who just wrote a letter to President Trump saying she will not pass a resolution to hold the State of the Union on Tuesday in House chambers, said she did so "because the government is closed."

A reporter asked her why she did not invite Trump to speak. Here's how she put it: 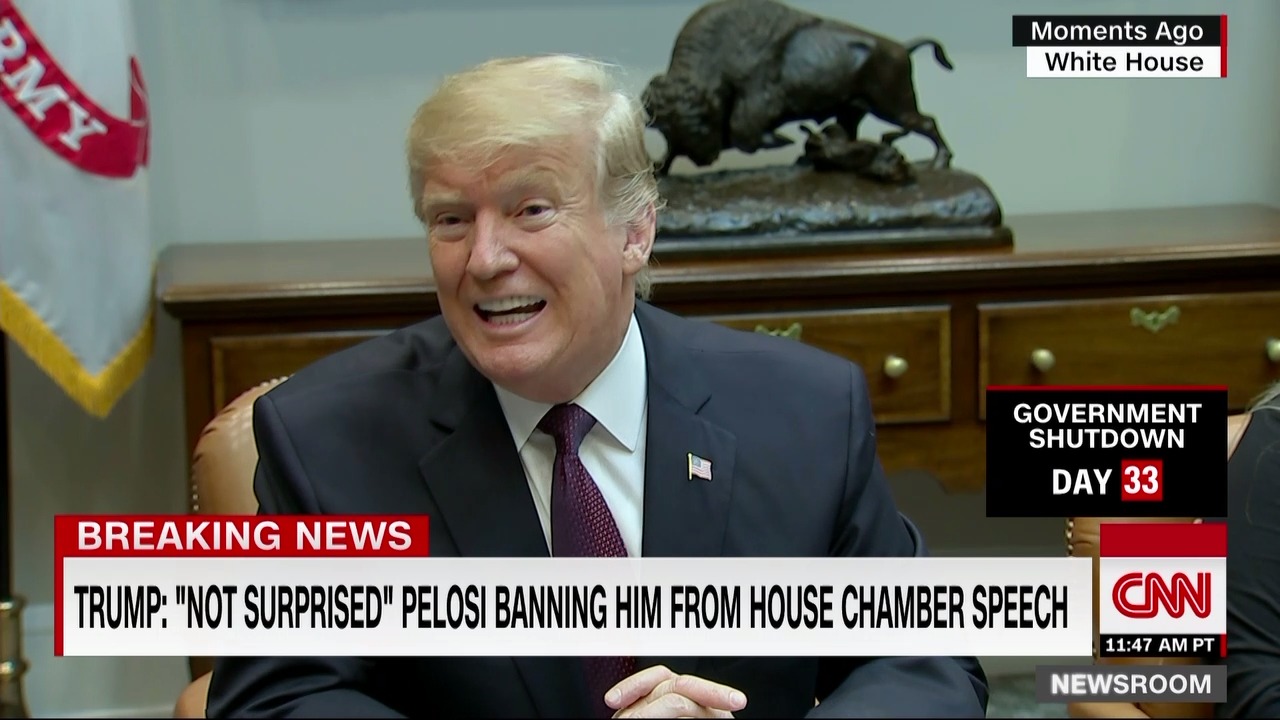 President Trump was speaking with reporters at the White House when he was informed about House Speaker Nancy Pelosi's letter informing him that the State of the Union won't happen on Tuesday at the House.

"I'm not surprised," Trump said when a reporter told him about the news. "It's really a shame what's happening with the Democrats. They've become radicalized."

There will be no State of the Union on Tuesday in the House.

Speaker Nancy Pelosi, in a letter back to President Trump, says the House will not pass a resolution for the State of the Union until the government is reopened.

Here's the letter she sent the President: 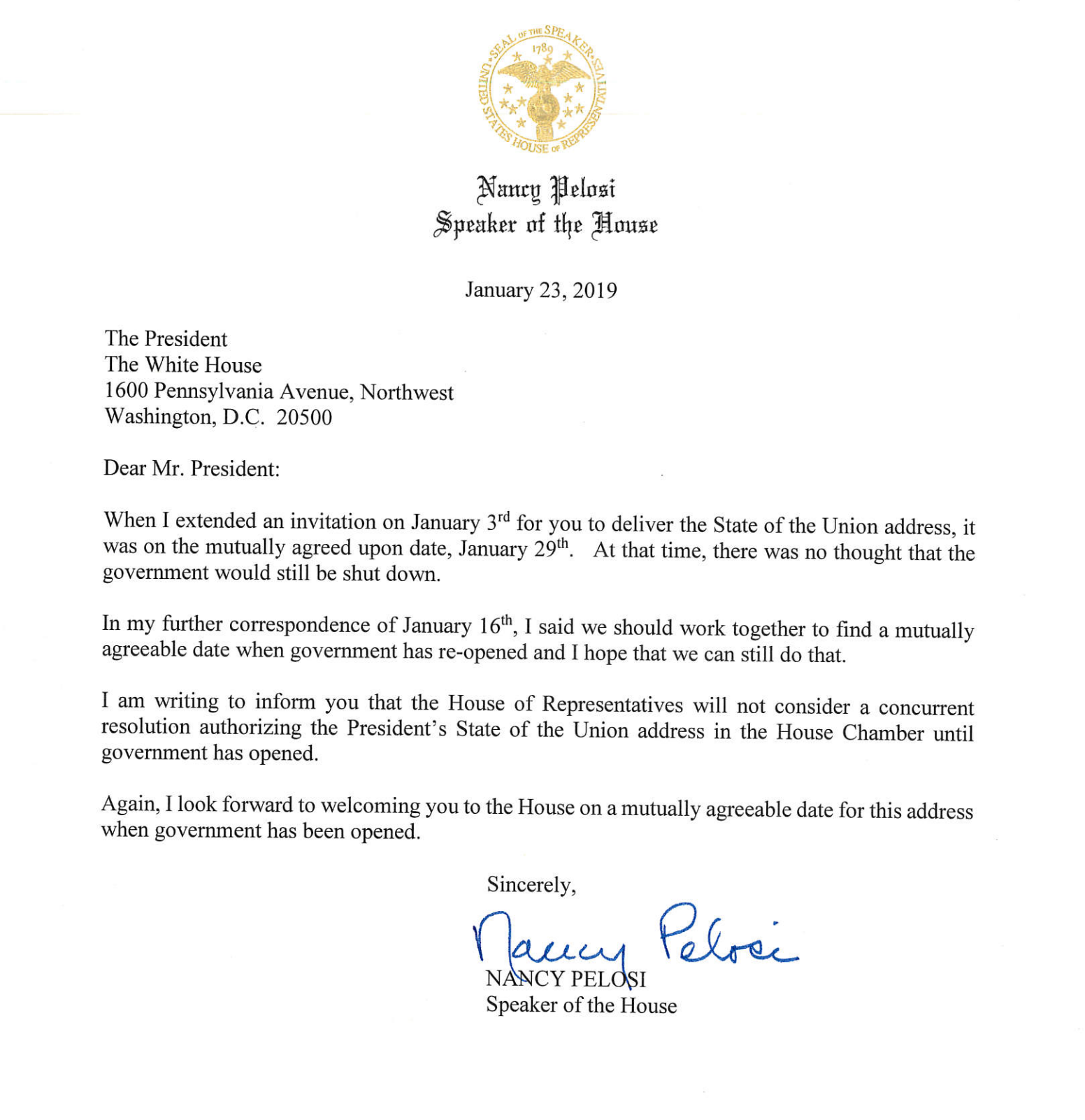 How we got here: Last week, Pelosi wrote Tump a letter asking him to change the date of the State of the Union address, or submit it in writing, because of the shutdown.

Earlier today, the President wrote back to the speaker, saying he will be “fulfilling my constitutional duty” and that he looks “forward to seeing you on the evening on January 29th in the Chamber of the House of Representatives.”

Kellyanne Conway, White House counselor to President Trump, accused House Speaker Nancy Pelosi of lying about security concerns regarding Trump's ability to give the State of the Union address next Tuesday night.

Many held signs made out of paper plates, with slogans demanding an end to the shutdown so furloughed federal employees can go back to work.