The White House message during the shutdown has been that there is a "national security emergency" at the border -- Sarah Sanders used these exact words this morning -- and the Situation Room lends an air of seriousness to the debate for the White House.

The Situation Room is also typically a no-press zone because it is a setting for classified intelligence, which means there is no opportunity for cameras or questions (although rare exceptions have been made in the past).

Having no press in the room means private discussions can be had, and it effectively blocks another photo-op moment between Trump and Pelosi and Senate Minority Leader Chuck Schumer from happening.

The invitations also didn't use the word "briefing" this time, -- it's just a meeting between principals. As a result, many on the Hill are expecting it will be just talks, but Democrats are also expecting the White House to put on some sort of show -- similar to the Homeland Security Secretary Kirstjen Nielsen briefing on Wednesday -- which was not classified and could have been held anywhere in the White House.

The bottom line: Trump likes the gravitas and air of seriousness the Situation Room brings even though it is technically just another conference room when national security and classified information is not being discussed. The Oval Office, which is traditionally used for meetings with Congressional leadership, would serve the same purpose in theory.

The Senate has left the building until Tuesday at 3 p.m. ET, meaning that the shutdown likely won't end before then.

Democrats believe they have effectively jammed Senate Majority Leader Mitch McConnell with the plan the House passed Thursday night -- a bill to reopen the government with no additional wall funding -- and that rank-and-file senators will start to feel the pressure and send word that it's time to buck the President and put the Democratic proposals on the floor.

Given that, Democrats don't plan on moving off their position (the two bills passed Thursday) at least until Republican senators return to Washington next week to face the press (and pressure).

The House last night passed two bills to reopen the government. However, it was largely a symbolic gesture.

Trump and congressional leaders will meet in the Situation Room at the White House to, once again, attempt to find a way to end a government shutdown, now in its second week

The measure consists of six spending bills to reopen and fully fund parts of government until the end of the fiscal year, September 30. The House passed the appropriations package 241 - 190.

The vote comes after the House passed the first measure -- a stopgap bill to reopen the Department of Homeland Security at its current funding levels until February 8, essentially punting the fight on the wall to next month while reopening DHS in the meantime.

Both bills are expected to go nowhere in the Senate. Even if they did, Trump, who wants $5 billion in new border wall money, announced he would veto both bills.

The House of Representatives passed a stopgap bill on Thursday night to reopen the Department of Homeland Security at its current funding levels until February 8, essentially punting the fight on the wall to next month while reopening DHS in the meantime. The stopgap bill would not allocate any new wall funding, rejecting President Donald Trump's demand for additional funding for a border wall.

The House passed the DHS stopgap bill 239-192. Five Republicans joined with Democrats to pass it.

Underscoring how far apart President Trump and Congressional Democrats remain over the shutdown, House Speaker Nancy Pelosi emphatically reiterated tonight, “We’re not doing a wall. Does anyone have any doubt? We are not doing a wall.”

In a news conference ahead of two votes tonight on reopening the government, Pelosi and other Democratic leaders continued to criticize the President for "holding hostage" federal employees to get his border wall money.

"Take yes for an answer. Open up government," Pelosi said.

Pelosi knocked Trump as a "master of diversion," accusing him of making noise about the border wall to distract from other problems in his administration.

Asked by CNN if she’s concerned about backlash, Pelosi fired back: “It has nothing to do with politics.”

She knocked the wall as "an immorality," "a waste of money," and a "diversionary tactic on the part of the President."

Asked by CNN whether she would accept $1 in new border wall funding, House Speaker Nancy Pelosi quipped that she could support $1, after refusing to budge on the border wall in ongoing negotiations.

“A dollar? Yeah, $1," she said, as other Democratic leaders chuckled around her.

Pressed by CNN why she wouldn't be willing to accept more than that, Pelosi hit back: "You said $1."

The White House issued a statement that threatened to veto the House's spending bills.

The House is planning to pass a legislative package tonight to reopen the government (It has been partially shutdown for 13 days now).

Here's a portion of the White House's statement:

“The administration is committed to working with the Congress to reopen lapsed agencies, but cannot accept legislation that provides unnecessary funding for wasteful programs while ignoring the nation’s urgent border security needs…. If either H.R. 21 or H.J. Res. 1 were presented to the President, his advisors would recommend that he veto the bill." 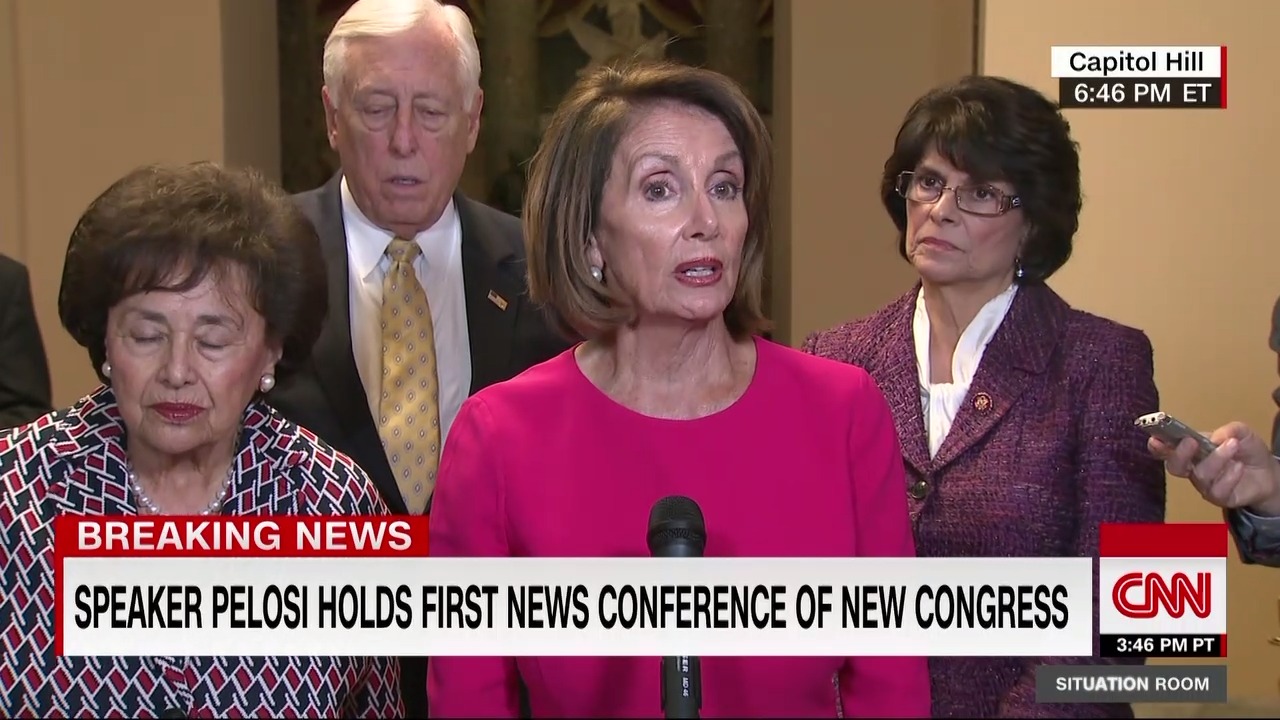 House Speaker Nancy Pelosi and fellow Democrats again outlined a plan Thursday to pass a legislative package later in the day to reopen shuttered parts of the government.

"We are diligent, diligent and persistent in trying to open up government. As I said today on the floor, we'll take ideas, good ideas from wherever they come," she said at the Democrats' first news conference since the new Congress convened Thursday.

Pelosi corrected him, and joked, “Well he told me 11:30. Maybe the real meeting is at 10 with the men or something.”

The Senate just adjourned for the day, without an agreement to reopen the government.

It will come back in at 10 a.m. ET Friday but no votes are planned so most senators are departing.