President Trump has invited lawmakers to return to the White House on Friday, after leadership races, to continue discussing a path to reopening the government.

"He asked us to come back on Friday after the leadership races," said Republican Rep. Kevin McCarthy following a meeting on border security in the White House Situation Room.

"They really didn't want to hear it," McCarthy said. 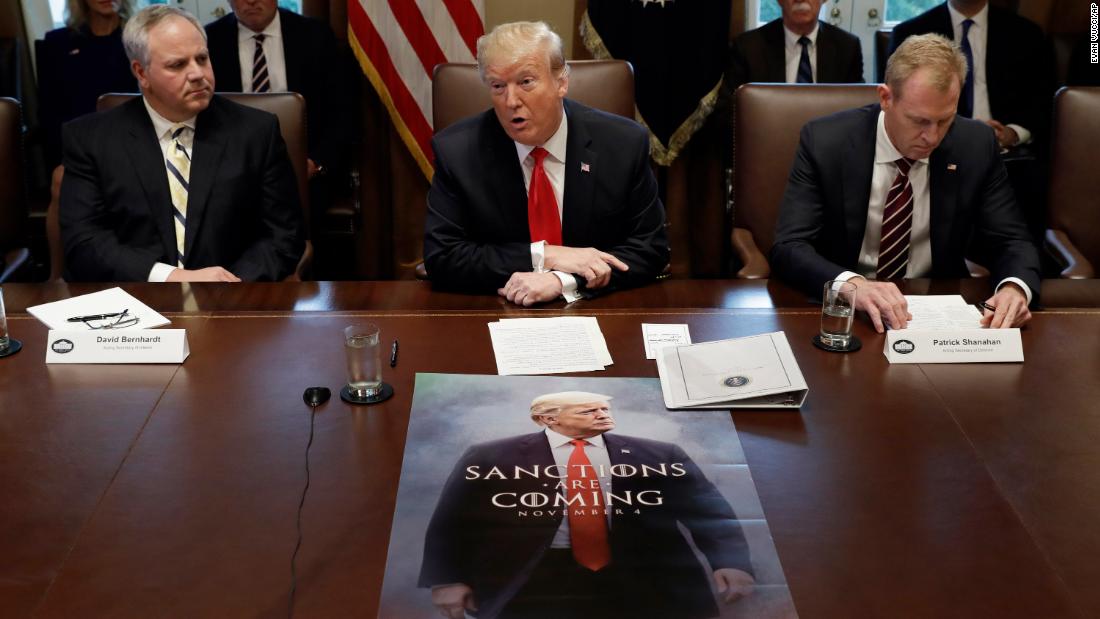 President Trump brought along a special prop to today's Cabinet meeting — a poster featuring an image of himself and the words: "Sanctions are coming" (a play on the well-known "Game of Thrones" saying, "Winter is coming").

Why? Well, we're not entirely sure.

Trump mentioned in his meeting that sanctions have worked with regards to Iran, but made no mention of North Korea — Kim Jong Un just yesterday warned the US on sanctions in New Year’s address.

The poster may have served as a reminder to both countries that more sanctions are never more than a season away.

It's not the first time we've seen this image: Trump first shared it in November on his social platforms. HBO told CNN at the time, "We were not aware of this messaging and would prefer our trademark not be misappropriated for political purposes."

HBO issued a more humorous response on Twitter, asking followers: "How do you say trademark misuse in Dothraki?"

Author George R.R. Martin, whose "A Song of Ice and Fire" series is the basis for the epic show, also responded on Twitter with an image of his own.

President Trump insisted he wouldn't accept anything less than $2.5 billion for his long-promised border wall.

He said more federal dollars are spent in Afghanistan in a month than for the wall.

"I mean, we spend in Afghanistan more in one month than what we're talking about for the wall. Think of that, okay. That's another way," Trump said.

He said $5.6 billion isn't much for border security.

He added that the shutdown could last "a long time and it could be quickly."

President Donald Trump was asked to speculate on how much longer he thinks the government shutdown will last.

“It could be a long time, and it could be quickly,” he told reporters during his Cabinet meeting.

He lamented being all by himself in the White House over the Christmas holiday, having made the decision to stay in Washington and forego his Palm Beach vacation due to the shutdown. He said he waved to machine gun-toting security on the White House lawn.

“I was here on Christmas evening, I was all by myself in the White House,” he said, although the first lady and son Barron were in town briefly for the holiday.

Trump said he was hoping Congressional leadership would come to negotiate an end to the shutdown.

“I was hoping that maybe somebody would come back and negotiate, but they didn’t do that,” he said. 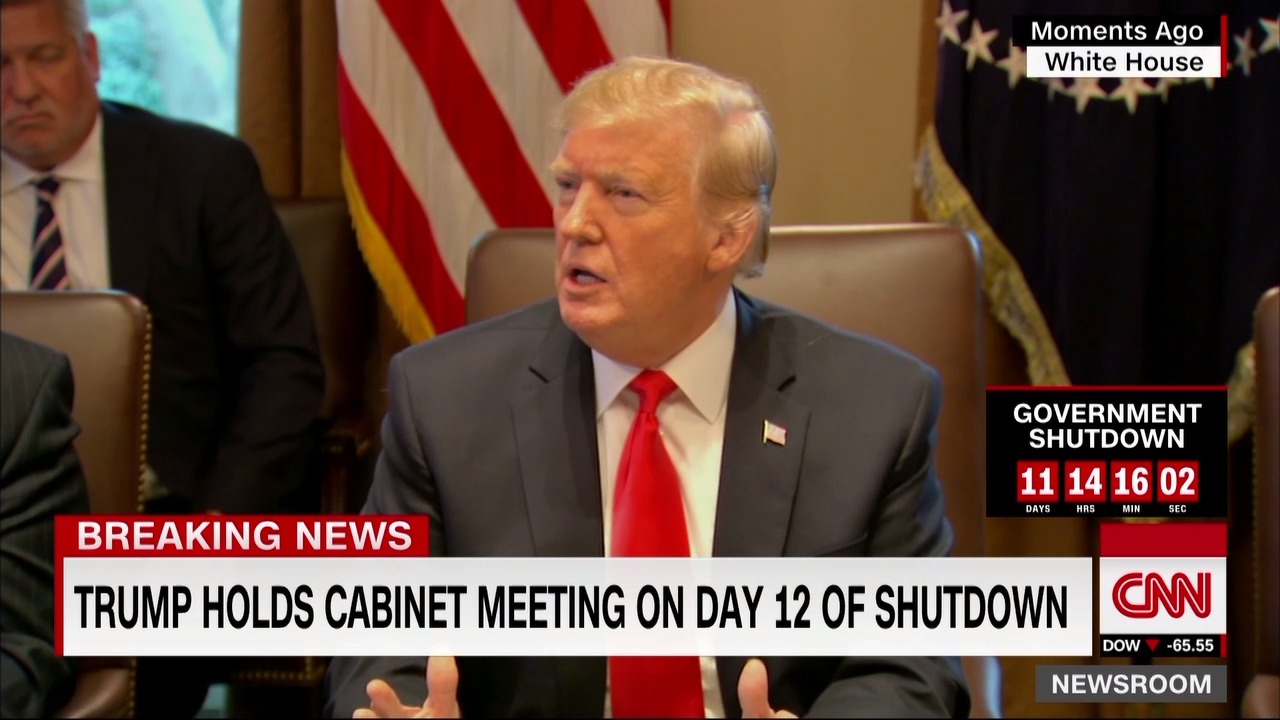 President Trump on Wednesday defended his decision to withdraw US troops from Syria, saying the country was not worth the US effort.

Questioned about a timeline for withdrawing US troops from Syria, Trump did not offer a specific number of months.

"Somebody said four months. I didn't say that," he said, adding later: "I think it's just over a period of time."

Trump's decision to withdraw was a facet of former Pentagon chief James Mattis' decision to resign. 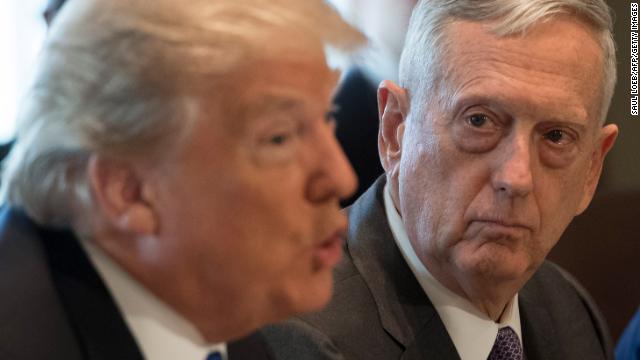 President Trump, speaking at a Cabinet meeting during the ongoing government shutdown, claimed he "essentially" fired his former Pentagon chief James Mattis, despite a resignation letter in which Mattis wrote he was departing because he didn't share Trump's worldview.

"I wish him well. I hope he does well. But as you know, President Obama fired him and essentially so did I," Trump said. "I want results."

Mattis departed as head of Central Command under Obama, in part because of disagreements over Iran.

In his resignation letter to Trump, Mattis said the President deserved a Defense chief more closely aligned with his "America First" views. Aides said at the time that Trump was frustrated at coverage of Mattis' resignation.

Trump said during his Cabinet meeting on Wednesday that Mattis was thrilled when Trump secured hundreds of dollars in military funding. But he said Mattis hadn't provided any success in return.

After recalling a meeting in which he questioned why the Taliban could not fight ISIS without US involvement, Trump mused he might have made a good military man.

"I think I would have been a good general but who knows?" Trump said. While of the Vietnam era, Trump himself did not serve after receiving a draft exemption for bone spurs. 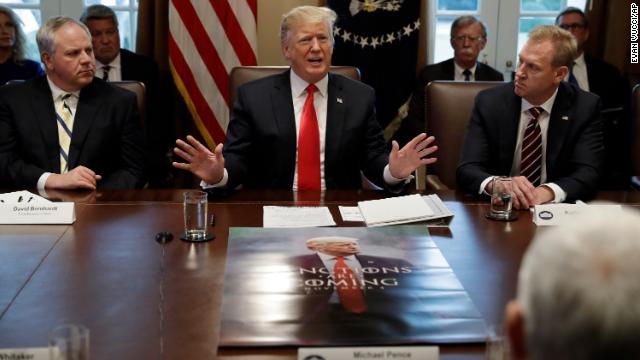 During a cabinet meeting on Wednesday, a reporter asked President Trump: “Is there a number below $5 billion that you’d be willing to accept in order to reopen the government?”

“I’d rather not say it. Could we do it for a little bit less? It’s so insignificant compared to what we’re talking about. You know, I’ve heard numbers as high as $275 billion we lose on illegal immigration,” Trump said. “Here you have a wall where we’re talking about to complete, because, again a lot of it has already been done. We've been getting money in. … The $5 billion approved by the House is such a small amount compared to the level of the problem.”

One thing to note: CNN previously reported that Vice President Mike Pence put a proposal for $2.5 billion for a combination border security and immigration priority funding on the table last week, but was rebuffed by Senate Minority Leader Chuck Schumer.

For his part, the President hasn’t publicly endorsed that proposal or any other beyond his initial request for $5 billion.

The first federal government shutdown in US history happened in 1976.

In total, there have been 21 government shutdowns over the course of 42 years, including the one we are currently in. There have only been four shutdowns since 1997.

Here's a list of the five longest government shutdown in US history: 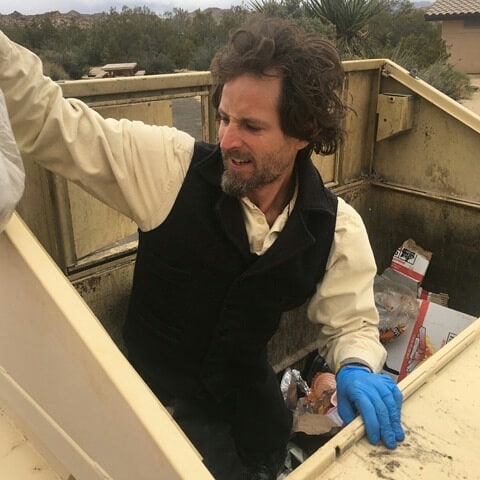 John Lauretig, the executive director for Friends of Joshua Tree, spent part of his New Year's Day cleaning up in the California park.

Volunteers are gathering at 10 a.m. every day to clean up the park. He said they’ve had as many as 40 volunteers on one day (but most days they get a handful).

The volunteers climbed into dumpsters to haul off trash. Lauretig said they filled two pickup trucks and trailers with trash during this cleanup.

“We got the trash cans about half full now instead of overflowing,” he said.

The volunteers are also cleaning toilets and trying to service as many bathrooms and trash cans as they can, but Lauretig said that the more popular areas need daily attention.

“Even if we hit one of the popular trailheads or parking lots today we have to go out tomorrow and service it again,” he said.

Here's a look at the cleanup work: