The White House has formally invited congressional leaders back to the White House on Friday for more funding talks, spokesman Hogan Gidley said.

The White House meeting will come one day after the 116th Congress convened for the first time.

The Democrats now control the House of Representatives, and Nancy Pelosi, just moments ago, was elected speaker of the House. Republicans still control the Senate.

Congressional leaders met at the White House on Wednesday, too. Democrats emerged from that meeting with President Trump indicating there was no breakthrough that might lead to a reopening of the government.

The partial government shutdown is nearly two weeks old, with no end in sight.

It's currently the fourth-longest in US history. That begs the question: What was the longest shutdown?

That would be the 21-day clash between President Bill Clinton and the GOP Congress that stretched from December 1995 to January 1996.

The second-longest happened in 1978, between Oct. 1 and 17. Democratic President Jimmy Carter was in the White House, and both chambers of Congress were also Democratic-led.

And the third-longest was in 2013 and ran for 16 days under President Barack Obama. Democrats controlled the Senate, but the GOP had the House.

Read more about the US's history of shutdowns here.

The inauguration of the 116th Congress today marks the first time ever that a federal government shutdown will extend into two different Congresses.

It's also the first time that a chamber of Congress changed power in the middle of a government shutdown.

Remember: Jan. 3 is the Day 13 of the shutdown, making it the fourth-longest in US history.

One furloughed federal worker, at home in Colorado anxiously watching CNN as the government shutdown clock continues to rise, tells our affiliate KMGH that she’s worried about how she’ll pay her bills -- she recently had surgery and her leg is in a cast.

“I get up really early to watch” the news, Andrea Popelka said, hoping to hear lawmakers have reached a deal before the money runs out.

"They're sitting there back and forth, and I feel like we're pawns in the game."

Another worker, furloughed HUD employee Rebecca Maclean, just told CNN, "It's not fair to put 800,000 employees lives and livelihoods in the balance."

"I'm worried every day about how much food I have in my house and whether or not I can make next month's bills," she said.

President Trump is now blaming the shutdown on the 2020 election. "The Democrats know they can’t win based on all of the achievements of 'Trump,' so they are going all out on the desperately needed Wall and Border Security - and Presidential Harassment," he tweeted. "For them, strictly politics!"

Don't forget: In early December Trump preemptively accepted ownership of a then-merely possible shutdown, telling the Democrats he would be "proud" to shut down the government over border security. "I'll tell you what, I am proud to shut down the government for border security, Chuck," Trump told Senate Minority Leader Chuck Schumer. "So, I will take the mantle. I will be the one to shut it down. I'm not going to blame you for it." 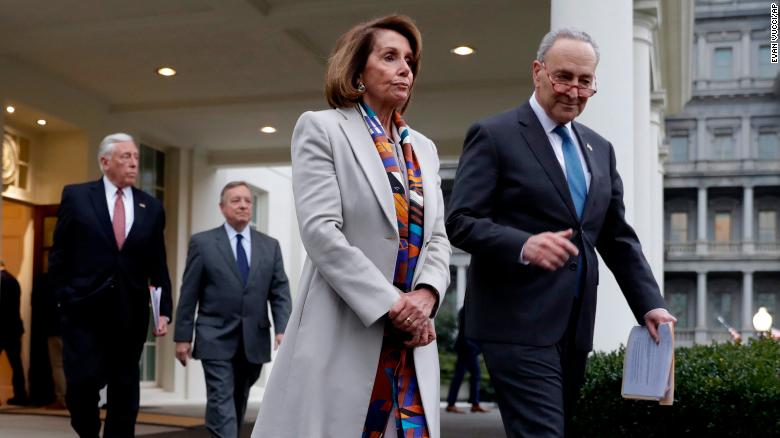 Democrats will grab significant leverage against President Donald Trump when they claim the House of Representatives on Thursday in a historic reshuffling of Washington's balance of power.

But as they gear up to make life miserable for the White House, the first consequence of the new era of divided government will be to make a solution to the partial shutdown of federal agencies, now well into its second week, more elusive.

Here's the thing: The showdown between Trump and newly empowered Democrats will only end when both sides have an incentive to move.

Right now, all the political forces that could bring the two sides together are flowing in opposite directions, as the political significance of the moment suddenly raises the stakes in their showdown over funding for Trump's border wall.

Trump is refusing to water down his demand for $5 billion in funding for his border wall in return for agreeing on a federal funding package and appears to think he's winning the showdown.

A huge shift in power: Presumptive House Speaker Nancy Pelosi has zero desire to acquiesce to the President during her first hours with a gavel in hand, only solidifying the position of the Democrats against additional funding. Her diverse caucus may yet disagree on much, but they appear in lockstep over opposing Trump on the wall.

Senate Republicans, who already voted once in the last Congress to keep government open, are on the sidelines having made clear they won't act on anything until a deal is reached that Trump will actually sign.

And holiday season distractions meant that the misery of federal workers deprived of paychecks did not reach a critical mass that would force lawmakers to demand a swift resolution.

Barring a miracle, the partial shutdown is not ending any time soon. Senate Republican Majority leader Mitch McConnell said Wednesday it could take "weeks" for government to reopen. And Trump told reporters a resolution could take "a long time."

A White House official said they asked Democrats during a meeting Wednesday with President Trump if they would agree to go higher than their current line of $1.3 billion for border security funding if he agreed to sign a short-term extension.

But Democrats would not signal that they would.

"This is going to go on for a while," the White House official said.

During the meeting, Democrats had asked Trump why he wouldn't sign six bipartisan Senate bills and let them continue to negotiate Department of Homeland Security funding during a short-term extension.

President Trump just tweeted about his meeting with congressional leaders at the White House on Wednesday, saying he's willing to work with Democrats on a bill that "keeps America Safe."

About that meeting: Trump told a group of lawmakers he can't accept Democrats' offer to reopen the government as the two sides negotiate border wall funding because he "would look foolish if I did that," according to a person familiar with the exchange.

Trump met with congressional leadership from both sides of the aisle Wednesday amid an on-going partial government shutdown. The President and Democrats are at odds over funding for a border wall.

Incoming House Majority Leader Steny Hoyer said Democratic lawmakers had not yet received an invitation from President Trump to return to the White House on Friday.

“There was a discussion about that but we haven’t received an invitation. We’ll have to make that decision at that time,” Hoyer told reporters after returning to Capitol Hill Wednesday evening.

Earlier Wednesday, Republican Rep. Kevin McCarthy announced that Trump had invited lawmakers back to the White House on Friday to continue discussing solutions to end the government shutdown.