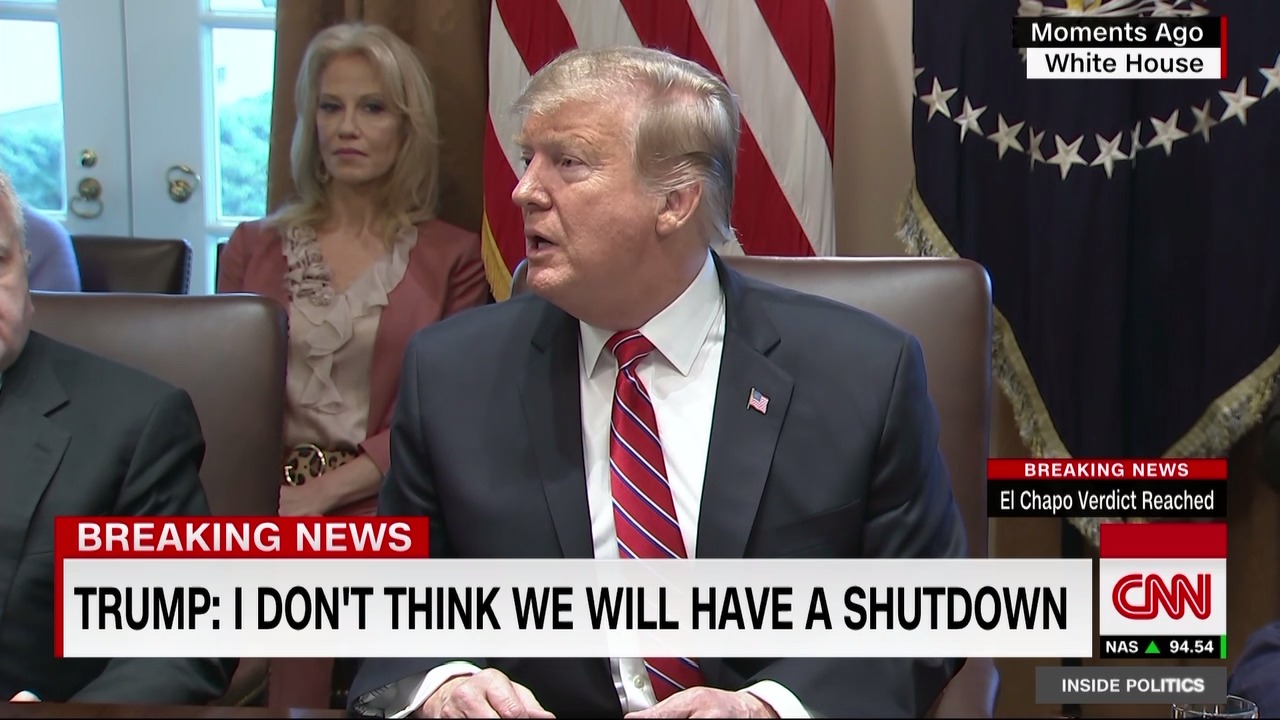 President Trump, speaking to reporters during a Cabinet meeting at the White House, said he doesn't expect another shutdown.

He added, however, if there is one, it's the "Democrats' fault."

Congressional negotiators say they have reached an agreement in principle to avert a partial government shutdown at the end of this week. 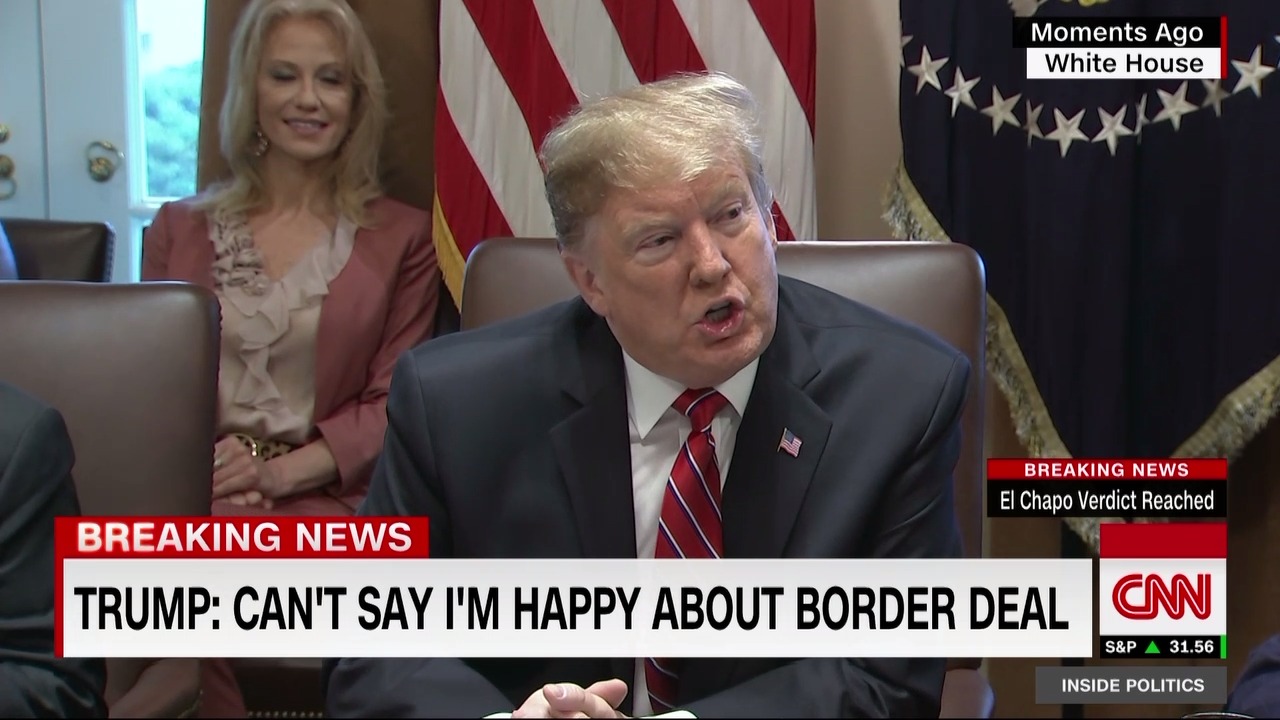 President Trump, answering a reporter's question if he'd sign the newly reached border deal, said he wasn't happy with it.

"I'm not happy about it, it's not enough, it's not doing the trick," Trump said, before adding he would add "things to it," though didn't specify what.

Why that matters: That would put lawmakers right up against the deadline, given the 72-hour rule in the House (which calls for the text of a bill to be public for 72 hours before the House votes on it). Lawmakers have until Friday to pass a deal to fund the government — and President Trump must sign it.

Keep in mind: When there’s a deal, lawmakers are far more willing to consider a continuing resolution for a day or two to allow for the Congressional procedural machinations to work out, but lawmakers still want to try and get it all wrapped up by Friday.

“We just need to see where people are – and how agreeable they will be,” one senior congressional aide said of the timing. “We’ll have a better idea in the next 24 hours.”

With all that said, this all comes down to Trump: There will be a lot that happens in the next few days between the legislation actually posting, leadership working to get their members and votes in line and powerful outside groups on both sides weighting in for or against the deal. But the only thing that really matters right now is how President Trump comes down on the deal. So far, he hasn't said where he stands.

President Trump is continuing to weigh his options after congressional negotiators presented an agreement with only $1.375 billion in border barrier funds.

White House officials have a roster of options they have been weighing that would employ the President's executive authority to secure money for a border wall. Not all would require declaring a national emergency.

Using USC 284 to divert some Pentagon funds for counter-narcotics

It's not clear which combination of these actions the President might use, and the topic has been under debate for weeks. The President has held nearly daily meetings with senior advisers and others to discuss his options.

The estimates for how much each option could garner have also been under debate. =

Democratic senators Joe Manchin and Doug Jones said they are optimistic about the agreement.

“We need to get this thing done,” Jones told reporters this morning.

Jones called another shutdown “devastating” and should not be on the table. He added that he's “real optimistic” about this new deal.

CNN then asked about the possibility that Trump could take executive action.

“I don’t think anyone on either side of the aisle want to see an emergency. I think that’s a slippery slope that we should not go down. If he goes down that route, we’ll figure this out," Jones said.

Right after Jones spoke to reporters, Senator Manchin popped out and said he thinks Trump should sign the funding bill.

He chuckled when asked about the potential that Trump could use money from other places to build his wall.

“As a former governor, we always look for extra money. That doesn’t bother me a whole lot.” Manchin said.

In their opening floor remarks Tuesday, top Senate leaders were upbeat — but still cautious — about the “tentative deal” or “agreement in principle,” as they described it, that was reached by negotiators late Monday to fund more border security and prevent a government shutdown.

Senate Minority Leader Chuck Schumer repeatedly urged President Trump to sign the bill, but Senate Majority Leader Mitch McConnell made no mention of the President and only said he hopes to move it through the Senate in “short order.”

McConnell noted that in order to get the deal, Democrats backed off their “extreme position” on detention beds and he praised the proposal because it would fund “miles of new border barriers.”

“It provides new funds for miles of new border barriers. And it completes all seven outstanding appropriations bills, so Congress can complete a funding process for all the outstanding parts of the federal government with predictability and certainty,” McConnell said. “As we speak, our colleagues are working hard to produce full legislative text. I look forward to reviewing the full text as soon as possible and hope the Senate can act on this legislation in short order.”

Meanwhile, Schumer said “months of shutdown politics must come to an end” with this agreement.

“We now have a bipartisan proposal to accomplish our goals to better secure the border and avoid another senseless government shutdown. I don’t know the details, but the parameters are good,” Schumer said. “We must not have a rerun of what happened a few months back where legislators, Democrats and Republicans, House and Senate, agreed and President Trump pulled the rug out from under the agreement and caused a shutdown.”

Several Republican senators said they would like Trump to get behind spending deal — a sign he may not have much support in the Senate if he were to veto it.

Sen. Johnny Isakson said said President is "in a box."

“I hope we have this behind us," he said.

Asked if the GOP should accept a deal, Isakson added: "Shutdowns are bad, period."

Sen. Lamar Alexander, a close ally to majority leader Mitch McConnell, said he hopes the deal is something the President can accept and sign into law.

And Sen. Susan Collins said that “absolutely” Trump should sign it. She renewed her concern about declaring a national emergency, saying there’s no grounds for doing so. 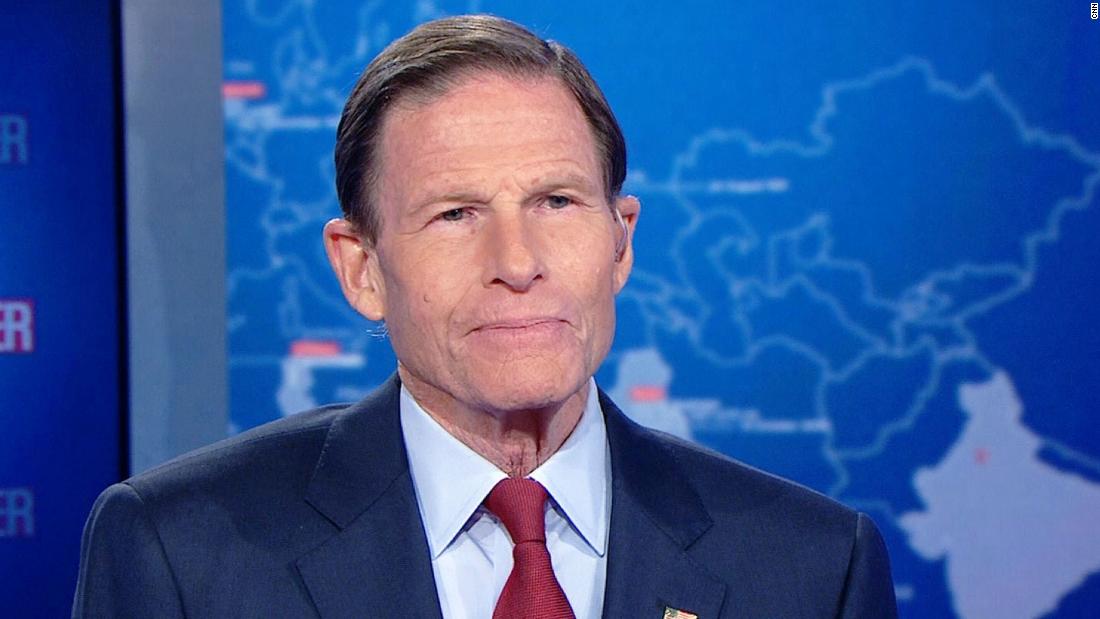 “He would be out of his mind and irresponsible. I think the President has no choice. If he is the least bit sane and responsible. In fact he should thank the Congress for taking the lead. The President ought to lead or get out of the way and enable this country to move forward with everything that’s so important,” he said.

CNN also asked about the possibility that Trump could take executive action.

“If the President illegally seizes power to reallocate money, he is violating the constitution and his oath of office and the Congress should act accordingly," Blumenthal said.

Where President Trump stands on the deal is still TBD. White House officials are currently digesting details of the agreement, according to an official, and they are not yet signaling their support.

But here's one warning sign: Two of President Trump’s closest allies on Capitol Hill — Reps. Mark Meadows, of North Carolina, and Jim Jordan, of Ohio — are already out trashing the agreement.

Here's what they said about it:

Remember: Meadows, the Freedom Caucus chair, and Jordan, his close ally and one of the leaders of the group, were never going to vote for a spending deal. They just weren’t. Neither will most, if not all, of their colleagues in the Freedom Caucus.

But they still can sway the President: The real power of both is their relationship with President Trump. Meadows talks to Trump constantly – and made clear in December, before the shutdown, Trump should stand his ground and fight. The ability to convince the President to oppose an agreement is a real concern among Republicans who do plan to support the deal.

Also notable: The Fox News host Sean Hannity, who frequently talks with the President (and to him on his show) told viewers last night that "any Republican that supports this garbage compromise, you will have to explain." Charlie Sykes called it "the Hannity veto..."

Trump is not yet endorsing the deal: "A lot of things have changed, and we'll see what happens," he told Laura Ingraham in an interview right before last night's rally.