Senate Majority Leader Mitch McConnell was forced off of his clearly stated opposition to a national emergency in order to secure President Trump’s support of the spending bill.

That’s a huge deal: McConnell has been warning the White House publicly and the President, directly, privately that an emergency declaration was not only opposed ideologically by many Senate Republicans, but also faced a very real chance of being blocked precisely because of that.

Remember: Congress can consider a joint resolution to block any national emergency.

The House will almost certainly move one (House Speaker Nancy Pelosi said she “may” file a legal challenge). If McConnell and Republicans maintained their opposition, Trump’s move would be blocked.

How close was Trump to opposing this bill? Well, McConnell just gave in on an issue he’s been unbending on for weeks to secure his support.

The bottom line: McConnell knew Trump was very seriously considering not signing the bill and the Senate leader has been furious about everything the last nine weeks.

The shutdown and the fight that followed has blocked his agenda, his judicial nominations, and a working Senate. A decision was made that it was time to put an end to all of it, so he put his opposition to the emergency declaration aside.

In other words? He made a deal.

Some Republican senators are weighing in on Trump's decision to declare a national emergency.

“Clearly I have concerns about using this declaration for this set of circumstances,” said Sen. Roy Blunt, a member of GOP leadership. “Let’s see what he does with.”

Sen. Rand Paul suggested it was a “bad idea”

All the senators said they need to see the details.

House Speaker Nancy Pelosi, speaking at her weekly press conference, indicated that she may file a legal challenge if President Trump declares a national emergency. She said that if the President does so, it will be an “end run around Congress.”

She continued: "That’s an option and we will review our options. But it’s important to note that when the President declares this emergency, first of all it’s not an emergency what’s happening at the border — It’s a humanitarian challenge to us … putting that aside, just in terms of the President making an end-run around Congress. Here he said, let us respect what the committee will do and then walks away from it. The President is doing an end-run around Congress.”

Several Republican senators said they have no information on President Trump's decision to declare a national emergency.

Sen. John Cornyn, who has been critical of going this route, said he still harbors concerns but wants to get more information.

Sen. Pat Roberts didn’t know this was happening until CNN reporters told him.

Sen. Lindsey Graham, who supports the move, said he hasn’t been told how it’ll be done.

“This is fight worth having," he said. "I’m not worried about what some Democrat is going to do in the future."

What Graham's talking about: Many Capitol Hill Republicans have expressed concern that declaring a national emergency in this situation would lead to a new norm. They worry about setting a precedent that future Democratic presidents could use to push a left-wing agenda item.

Sen. Mitch McConnell’s abrupt announcement Thursday that President Trump would sign the border security spending package came after a day of consternation among Republican lawmakers and administration officials about whether the President would sign the bill.

Earlier today, the President phoned GOP allies on Capitol Hill to ask their advice and vent at some of the bill’s shortcomings, leading many to believe he was backing away from his earlier support of the compromise spending legislation, according to people familiar with the calls.

Trump told multiple allies he was considering not signing the bill.

That concern extended to the White House, where aides spent all morning trying to digest the details of the 1,100-page bill and flag potential snags both to the President and to Capitol Hill.

In briefings about the bill, the President expressed concern that something might be found buried the bill after he signed it, leading to embarrassment. He huddled with his acting chief of staff Mick Mulvaney, Homeland Security Secretary Kirstjen Nielsen and legislative affairs director Shahira Knight in the Oval Office this afternoon, as they intensely lobbied the President to not back away from the bill.

Amid the wrangling, many of the President’s senior advisers stressed he should sign the package to avoid another shutdown, which they said would damage him politically.

They said signing a national emergency declaration or some other type of executive action would blunt whatever blowback he received from conservatives.

White House press secretary Sarah Sanders just issued a statement confirming that President Trump will sign the bill, and "take other executive action -- including a national emergency -- to ensure we stop the national security and humanitarian crisis at the border."

“President Trump will sign the government funding bill, and as he has stated before, he will also take other executive action -- including a national emergency -- to ensure we stop the national security and humanitarian crisis at the border. The President is once again delivering on his promise to build the wall, protect the border, and secure our great country.”

One more thing to keep an eye one: House Speaker Nancy Pelosi will have a presser at 3:30 p.m. ET.

Most Americans (66%) are opposed to using a national emergency in order to build a border wall, but Republicans (64%) – particularly conservatives (72%) – are largely in favor of the President taking that action, according to CNN Polling released last week.

The question asked: "Do you think Donald Trump should or should not declare a national emergency in order to build a wall along the border with Mexico?" 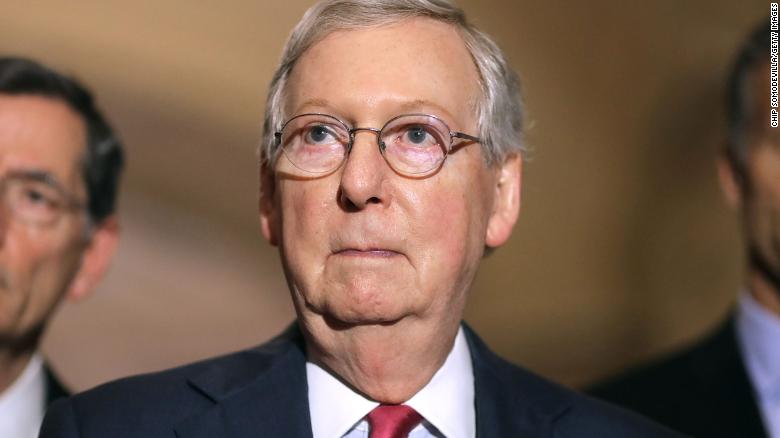 Senate Majority Leader Mitch McConnell, speaking from the floor, said President Trump will sign the spending bill, but also indicated that he would be issuing a national emergency declaration.

"I've just had an opportunity to speak with President Trump, and he would, I would say to all my colleagues, has indicated that he's prepared to sign the bill. He will also be issuing a national emergency declaration at the same time. And I've indicated to him that I'm going to prepare -- I'm going to support the national emergency declaration. So for all of my colleagues, the President will sign the bill. We'll be voting on it shortly."