President Trump is expected to declare a national emergency today, in order to reallocate money for a total of $8 billion in government money to fund the wall.

But it won't be the only active national emergency: In fact, there are 31 others currently in effect — and the oldest dates back to 1979.

Another 26 national emergencies have been declared and ended in that time period.

Here's a look at them: 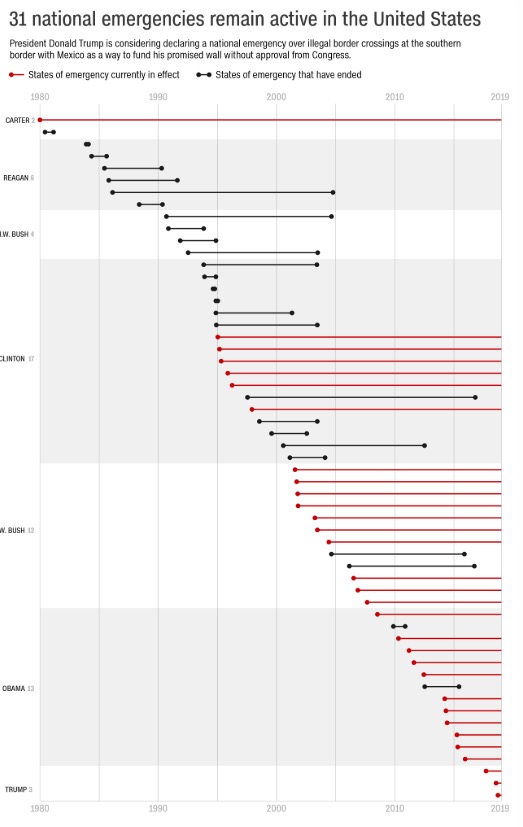 President Trump is expected to soon sign a compromise deal that will fund the government and avert another shutdown. But the deal will only provide $1.375 billion for border barriers — far short of what the President has asked for to build his long-promised border wall.

So Trump is expected to turn to executive action to secure another $8 billion in government money to fund the wall.

A White House official said Trump will both sign the funding bill and the paperwork for his executive actions, including the national emergency, at an event in the Rose Garden at 10 a.m. today.

That White House official said the funding will break down as: 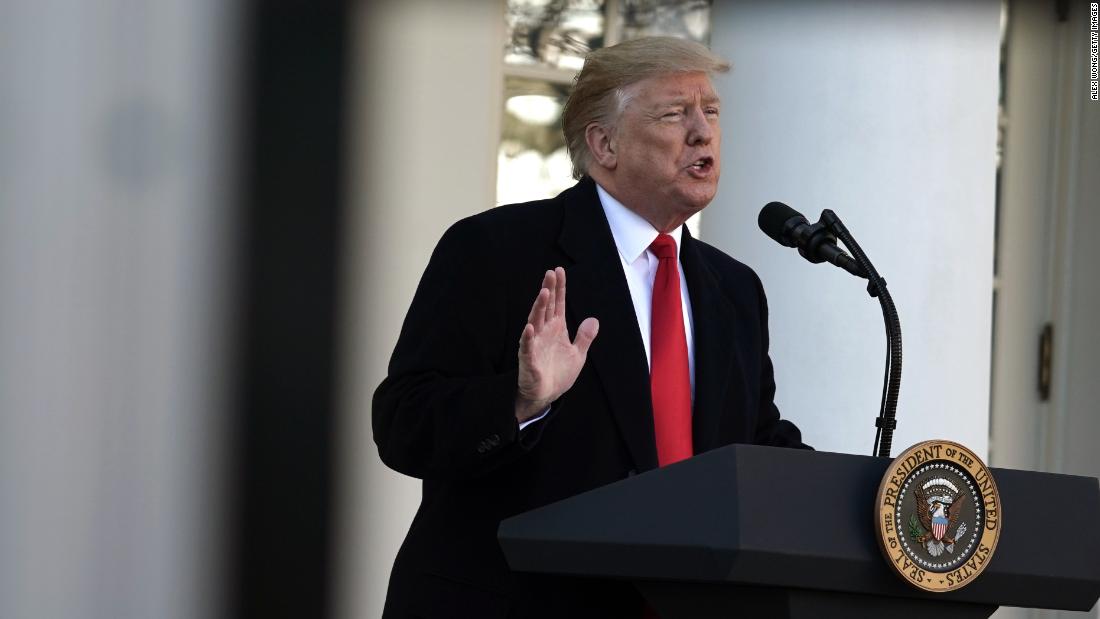 President Trump would deliver remarks at 10 a.m. ET today, the White House announced late Thursday night. The White House said the speech will be on "the National Security and Humanitarian Crisis on the Southern Border."

What we're watching for: It is widely expected that he will sign the compromise funding legislation passed by the House and Senate last night, and then through executive action declare a national emergency with respect to the border.

A White House official confirms reports that the President plans to use the declaration to announce he will allocate additional funds from other projects to fund additional parts of the border wall totaling $8 billion.

What this means: A declaration of a national emergency to bypass Congress and reprogram funds already allocated by lawmakers would represent Trump's most striking assault yet on the system of constitutional order that he is sworn to preserve, protect and defend.

Our live coverage has ended for the night, but we'll be back tomorrow morning. Scroll through the posts below to see the final votes or follow CNN Politics.

President Trump is expected to sign both the compromise border security bill and the paperwork for the executive actions he is undertaking to build the wall during a Rose Garden event tomorrow, a White House official said.

The President will sign the documents during the 10 a.m. ET event tomorrow in the Rose Garden currently billed on his schedule as delivering "remarks on the national security and humanitarian crisis on our southern border." That's the plan as of now, this official said.

A White House official said Trump is expected to announce that he will use executive action to draw on a variety of administration funding sources to help finance construction of his wall on the border. A national emergency declaration is expected to be one part of that.

The official confirmed the President is set to announce the total amount to be in the range of $8 billion. The official did not specify where all of that money would come from or whether the White House executive action would withstand a court challenge. Democrats are likely to take the matter to court.

House Speaker Nancy Pelosi praised lawmakers for working together and passing a spending deal to avert a shutdown at a bill signing ceremony tonight.

"Three hundred votes on the floor of the House," she said. "It was quite a remarkable show."

The compromise deal will only provide $1.375 billion for border barriers, far short of what President Trump has asked for to build his long-promised border wall. The bill is expected to go to the President’s desk for his signature tomorrow.

Pelosi went on to thank lawmakers for protecting the country by "securing our border and protecting our values."

While Pelosi did not mention Trump by name at the ceremony, she said reminded House members about their oaths.

"Where we go from here will be for us all to honor the Constitution and especially Article 1, especially the system of checks and balances. We will not have an end-run around Congress of the United States," Pelosi said.

Why this matters: Earlier today, the White House announced that the President would sign the compromise legislation, but will also take executive action in a bid to get the money the administration wants for border security.

Pelosi told reporters earlier that she was considering a legal challenge.

"I may," Pelosi said when asked about the prospect of challenging Trump in court. "That's an option and we will review our options."

"The President is doing an end-run around Congress," the California Democrat added.

President Trump is expected to announce that he will use executive action to draw upon a variety of administration funding sources to help finance construction of his border wall, a White House official said.

The executive action is expected to include a national emergency declaration.

The official confirmed the President is set to announce the total amount to be in the range of $8 billion.

The official did not specify exactly where all of that money will come from and whether the executive action would withstand a court challenge, which could come from Democrats.

The House of Representatives just approved a spending deal to avert a government shutdown.

The legislation will now go to the White House for President Trump's signature. He's expected to the sign the bill tomorrow.

Once the bill is signed into law, the entire federal government will be funded through the end of September.

House Speaker Nancy Pelosi plans to hold an enrollment ceremony after the vote.

The House will now debate the funding bill for an hour before moving on to the final vote.

After the debate is over, the House will vote on the final measure.

One thing to note: This may happen sooner if ether party decides to give back time.