Democrats take control of the Senate

Our live coverage of the Georgia Senate runoff elections has ended. You can read more about the results here.

As Georgia voters head to the polls today to vote in the Senate runoff elections, some US senators are planning for tomorrow, when Congress is expected to certify President-elect Joe Biden's victory.

Sen. Ted Cruz will object to the state of Arizona’s electoral college results on Wednesday, two sources familiar with the matter tells CNN.

A person familiar tells CNN this is not as much about Cruz questioning the election results as it is him reacting to the fact that he has not received the commission to study election results that he and his group of 10 other senators requested.

This is the second US senator to formally object. This means that in addition to Sen. Josh Hawley objecting to the Pennsylvania results, members will also be forced to debate the Arizona results as well.

It's also worth noting that Sen. Kelly Loeffler of Georgia is signaling she plans to object to Georgia's results.

“I spoke with the President-elect about that personally yesterday,” Ossoff said.

In response to CNN asking whether President Trump’s call to the Georgia Secretary of State was illegal, Jon Ossoff said, “It may be illegal, it's certainly improper and disgraceful.”

Democrat Jon Ossoff is attempting to flip a Georgia Senate seat from red to blue in a matchup against Republican David Perdue.

Ossoff rose to political prominence during his unsuccessful bid for a Georgia congressional seat during a 2017 special election that attracted widespread national attention and huge sums amounts of fundraising revenue. Now he has his sights set on the Senate.

Ossoff is one of two Democrats attempting to flip a Senate seat in a pair of high-profile Georgia runoffs whose outcome will determine control of the chamber in the new Congress. The other race features Republican Sen. Kelly Loeffler and her Democratic opponent Rev. Raphael Warnock.

If either Republican holds onto their seat, the GOP will be poised to maintain its Senate majority. But if both Democrats win, it would bring the balance of power to 50-50 in the chamber with Vice President-elect Kamala Harris able to step in and cast tie breaking votes, effectively handing the majority to Democrats.

The race between Ossoff and Perdue has featured intense attacks on both sides. The Georgia Republican has accused his Democratic opponent of pushing a radical, socialist agenda, while Ossoff, in turn, has painted Perdue as an out-of-touch Washington insider willing to sell out his constituents.

When Perdue declined to participate in a December debate, Ossoff showed up anyway and went after his opponent. The Georgia Republican was represented by an empty podium at the end and Ossoff fielded questions about his response to the coronavirus pandemic and used the platform to call out Perdue for not attending.

"The reason that our country has lagged the entire world at the efficacy of our response to this virus, the reason that we are losing thousands of people per day to this virus is because of the arrogance of politicians like David Perdue," Ossoff said at the time. "So arrogant that he disregarded public health expertise, and so arrogant that he's not with us here today to answer questions."

While all eyes are on the Georgia runoff elections today, tomorrow the focus will shift to Washington, where Congress is expected to certify President-elect Joe Biden's victory.

President Trump today is tweeting what could be perceived as his justification for Vice President Mike Pence’s role tomorrow, claiming that the Vice President “has the power to reject fraudulently chosen electors.”

But remember: This would be an unprecedented and legally dubious action by Pence to reject the will of the voters and select a different slate of electors -- and it would almost certainly be rejected by both chambers of Congress.

Last night, Trump appeared zeroed-in on the vice president's role in certifying the 2020 presidential election results as a potential Hail Mary during a rally meant for a pair of Georgia GOP Senate candidates on Monday night, saying that he hoped Pence would "come through for us."

As focus turns on Georgia senate runoffs, Atlanta hip-hop artists Jermaine Dupri and Jeezy have been working to get voters to turn out.

"I had humble beginnings and I understand my influence," Jeezy told CNN. "For the longest time, my culture feels like we've been alienated from politics. So now we have a say. So I just want to make sure we all understand that our vote counts, our voices count and our numbers count."

A Biden-Harris supporter, he said Democrats winning the Senate seats is important for Biden to deliver on his promises for the Black community.

"At the end of the day, we're not trying to split the world. We just need what we need as a people, and that's it," he said. "It's about a particular group of people that need a little more tender loving care ... Our neighborhoods are the ones plagued with crime, the ones people are evicted from their homes, the ones kids can't go out to be safe because we're not set up for that. So we're just asking for the things that make sense for us."

Dupri said the activism is not new to Georgia.

"We all have been active one way or another without actually getting paid to do this, without actually even doing interviews and all this type of stuff. It's just something that we do in the city," he said.

Republican David Perdue is fighting to keep his Senate seat in Georgia amid a challenge from Democrat Jon Ossoff.

Perdue, who was elected to a six-year Senate term after winning election in 2014, is one of two Republicans attempting to fend off a Democratic opponent in a pair of high-profile Georgia runoffs whose outcome will determine control of the Senate in the new Congress.

Perdue’s campaign has emphasized his close ties to President Trump and his business background prior to taking office in the Senate.

The Georgia Republican has accused his Democratic opponent of pushing a radical, socialist agenda, while Ossoff, in turn, has painted Perdue as an out-of-touch Washington insider willing to sell out his constituents.

When Perdue declined to participate in a December debate, Ossoff showed up anyway and used the platform to call out Perdue for not attending.

In the closing days of the race, Perdue went into quarantine after learning that he had been in close contact with an individual who had tested positive for Covid-19. 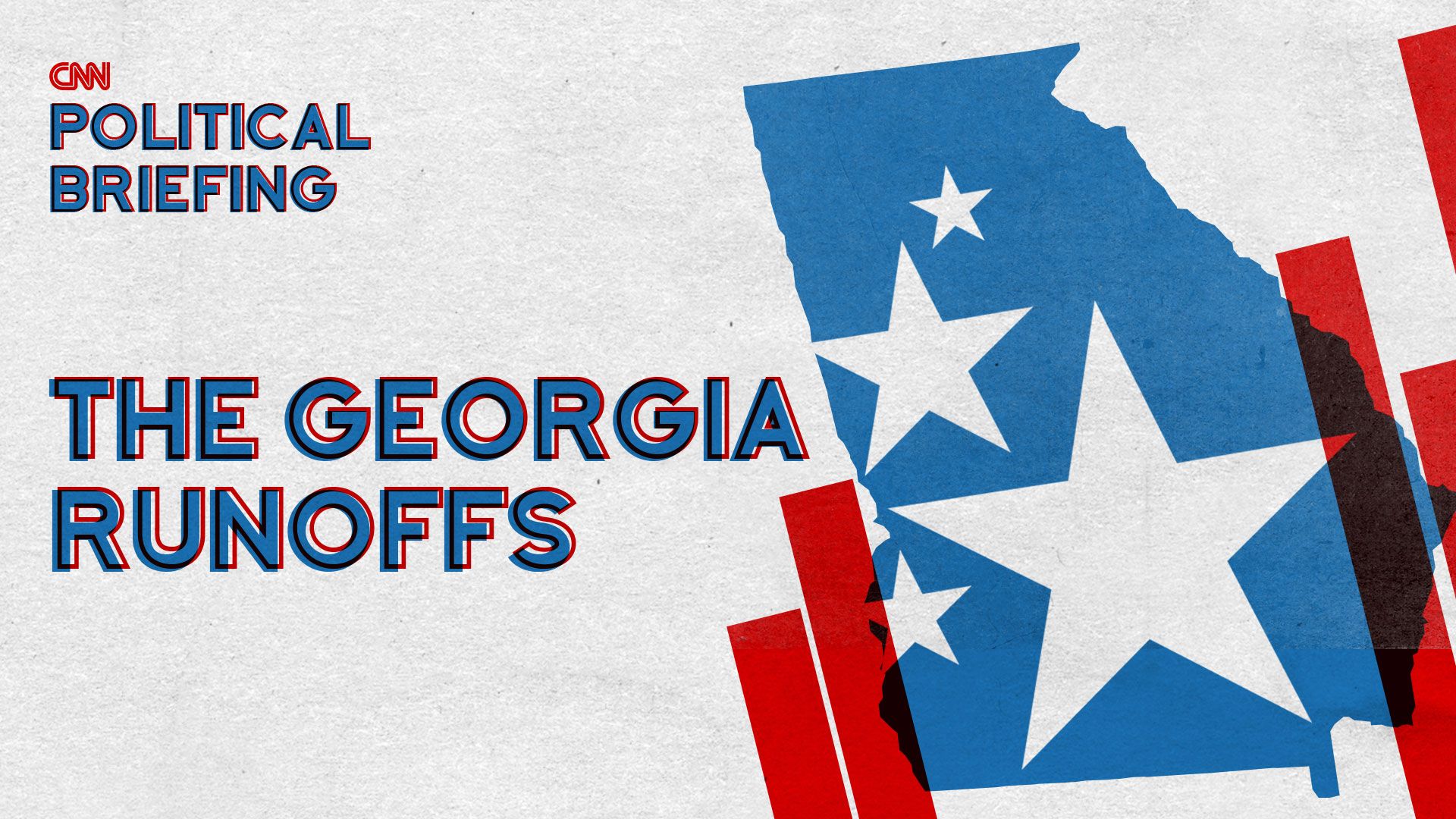 Today's two crucial Georgia runoff elections are happening today — and they will determine which party controls the Senate.

You can catch up on the latest developments in the races and meet the four candidates vying for the two seats with the CNN Political Briefing podcast, hosted by David Chalian.

Listen to the four-part series focused on the Georgia races below:

Democrat Raphael Warnock is challenging Republican Sen. Kelly Loeffler for her seat in a hotly-contested Georgia runoff election that will determine which party controls the Senate.

At the age of 35, Warnock was chosen in 2005 to lead Ebenezer Baptist Church, and has since taken on issues in Georgia like overhauling the criminal justice code, and expanding voter registration and Medicaid.

Loeffler has tried to portray her Democratic opponent and the leader of Martin Luther King Jr.'s historic church in Atlanta as too far to the left.

Warnock, in turn, has said that Loeffler wants to divide Georgia, and distract from her opposition to the Affordable Care Act and the health care insurance it provides amid a pandemic.

During a December debate, Loeffler repeatedly referred to her Democratic opponent as a "radical liberal.”

"Listen, I believe in our free enterprise system," Warnock said after Loeffler asked if he would renounce socialism and Marxism.

Warnock, for his part, targeted the GOP senator over stock transactions that have been a subject of intense scrutiny for their timing related to the coronavirus pandemic.

Addressing Loeffler, he said at the time, "You dumped millions of dollars of stock in order to protect your own investments."

Loeffler responded by saying, "I've been completely exonerated. Those are lies perpetrated by the left-wing media and Democrats to distract from their radical agenda."

As Georgians head to the polls for runoff elections today, Majority Whip Rep. James Clyburn shut down any prospect of impeachment after President Trump pushed Georgia Secretary of State Brad Raffensperger in a call to "find" votes to overturn the election results.

“It would be a waste of our time here in the House to pursue impeachment. I suspect if all that I heard on this tape is to be investigated, there could very well be criminal charges brought by state and local governments down there in Georgia…and I would hope that that would be pursued. That is something that can be pursued even after Jan. 20,” Clyburn said on CNN’s “New Day.”

“I would hope that the House of Representatives would spend its time concentrating on getting ready for this new administration and getting our House in order in order to deliver for the American people so that we can get beyond this pandemic,” Clyburn added.

During a rally last night, Trump also said he hoped Vice President Mike Pence would "come through for us" in the vice president’s largely ceremonial role in certifying the 2020 presidential election results.

“We know what the results are … For the President to be calling upon the vice president to do something to unravel this is just beyond the pale,” Clyburn said.