Warnock's win gives Democrats 51 seats in the Senate, providing the party with a majority that likely won’t have to rely as heavily on Vice President Kamala Harris' tie-breaking vote and also allows Majority Leader Chuck Schumer more control of key committees and some slack in potentially divisive judicial and administrative confirmation fights.

This runoff was held after neither candidate was able to receive more than 50% of the vote during the midterm election held on Nov. 8.

As President Joe Biden walked off of Air Force One Tuesday, he turned to the press standing nearby and said unequivocally that Sen. Raphael Warnock would emerge from his run-off race victorious.

He then get into his vehicle and pool departed for the White House.

Why this matters to the president's agenda: Warnock's win would give Democrats a clean Senate majority — one that doesn’t rely on Vice President Kamala Harris’ tie-breaking vote and allows Majority Leader Chuck Schumer more control of key committees and some slack in potentially divisive judicial and administrative confirmation fights.

Two poll workers in Georgia were involved in a serious car accident Tuesday while transporting vote information for the Senate runoff election.

“We had a car accident with one car carrying one of the (voting) cards,” Gabe Sterling, chief operating officer in the Secretary of State’s office, told CNN.

“They had to bring the jaws of life out,” Sterling said. “Both of the poll workers are OK, they turned down medical attention… but they were able to retrieve that vote card.”

Cox said that the poll workers were transporting a memory card with vote information and “while the two were in route… they got into a car accident. It was rather severe.”

When asked if the poll workers were OK, Cox repeated that they declined to go to the hospital but noted: “They had to be cut out of the car.”

Later, at a news conference, Sterling said the workers are “tough cookies.” He said Cox “runs a tight ship down there, and she hires tough, smart, good people, and we're thankful they're safe."

A senior GOP source involved in campaign strategy says the Georgia Senate runoff race has been tight so far because of the partnership between Gov. Brian Kemp and Senate GOP Leader Mitch McConnell’s super PAC, which dropped $2 million into Kemp’s get-out-the-vote operation.

The source blames the National Republican Senatorial Committee (NRSC) — in partnership with the RNC — for a lackluster voter-targeting effort. CNN has reached out to the NRSC for comment.

There’s been an ongoing feud over tactics and strategy between the NRSC — led by Sen. Rick Scott — and allies to Mitch McConnell, whose super PAC the Senate Leadership Fund was the biggest spender in Senate races.

While the race is tight, several GOP sources believe Walker's path to victory is complicated because of where the outstanding votes are coming from. 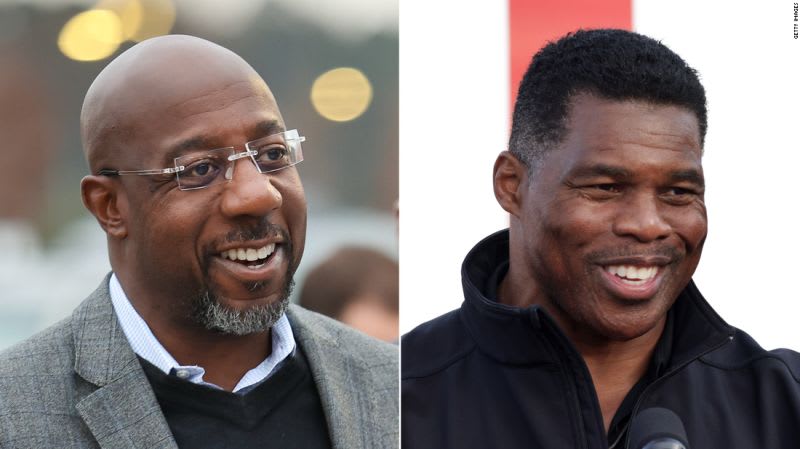 All eyes are on Georgia's most populous counties tonight as votes continue to come in.

In Fulton County — the most populous county — Republican Senate candidate Herschel Walker needs to close the gap with incumbent Sen. Raphael Warnock — who leading with 82% of the vote so far — with 67% of the vote reporting, CNN's John King said.

At the moment Warnock is over-performing in his results compared to Nov. 8 in Atlanta and the suburbs around it, King added, a key advantage for the Democratic senator.

Walker's comeback plan hinges on Election Day votes, in hopes to close the Warnock's lead in those key counties.

While many of the larger, urban counties are already reporting a significant amount of votes, Gabe Sterling, the chief operating officer in the office of the Georgia Secretary of State, said they are still waiting for several rural counties to report their tallies.

“The four largest most populous counties which kinda can swing the vote one way or the other by themselves are really coming in pretty quick,” he told CNN Tuesday, but added that the race is so close in the state, that the smaller counties really matter.

In order to upload votes, poll workers often have to drive through the county to deliver tallies, sometimes on memory cards, Sterling said, pointing to Fulton County as an example, which is about 90 miles long.

“We had a car accident with one car carrying one of the cards,” he told CNN. He said both workers are okay and they were able to retrieve the voting information and get it to a county headquarters.

“This is the kind of stuff that happens on Election Day because you have thousands of people out there doing their jobs,” Sterling said.

He said the state saw record turnout today — including a record number of people both voting in-person and by absentee ballots in a runoff election.

But there is still many more ballots to count, saying, “It’s going to be a long night”

As the race remains tight in Georgia, Republican Herschel Walker is waiting to see if his efforts to build off Gov. Brian Kemp's credibility with GOP voters has paid off.

After it became clear he would find himself in a runoff with Democratic Sen. Raphael Warnock, Walker embraced Kemp in a way he declined to do during the general election race.

That's not surprising given Kemp won his reelection by nearly 8 percentage points and has built goodwill and trust with GOP voters in a state where a popular former Republican president tried to defeat him at the ballot box.

But there are no hard feelings from Kemp's orbit, which has remained focused on getting a Republican Senate candidate elected while leaving the personal aspects of the race aside.

Even though Kemp and Walker's messages weren’t aligned during the general election, it was a "no brainer" that Kemp needed to support Walker in the runoff, the adviser said.

Meanwhile, the optimism is rising at Walker’s campaign party tonight, with supporters cheering as votes come in, with the lead occasionally see-sawing back and forth with Warnock.

But behind the scenes, strategists quietly worry that Walker may have hit his high-water mark, with much of the vote-counting already finished across many rural counties.

“We’ve kept it close, but the next hour could be tough,” one top Walker adviser said. “There are a whole lot of votes to count in metro Atlanta.”

Walker leads the Election Day vote by around 32.8 percentage points while nearly 64% of that voting category remains uncounted.

Chalian noted that the ultimate margin of the Election Day vote lead will be determined by the ballots still to be reported from the more populous counties of Georgia:

"If you look back in November, Walker won the Election Day vote by about 15 points. So, right now that is a much bigger margin of victory, meaning it's mostly rural deep Republican areas that is giving him that big margin. This is why, as you guys were saying, we have to wait to see what that Election Day vote looks like from those big populous Democratic counties in the Atlanta area to see if that margin of victory for Walker narrows — or if he can keep this big Election Day vote victory that may help him keep this current lead that he has in the race," he said.

If Democrats win the Senate runoff in Georgia and secure a slim 51-49 majority over Republicans, they will have significant governing advantages compared to the 50-50 split in the current Congress, during which a power sharing agreement gives Republicans considerable leverage over Democrats despite being in the minority.