There has been no announcement yet on what was agreed, or even whether any agreement was reached.

Up to 90 minutes were allotted for the two leaders to meet.

As US President Donald Trump meets with Chinese leader Xi Jinping, the big question is whether they'll be able to strike a deal.

There's no telling at this point how likely a trade war ceasefire is.

Earlier today Trump said, "Time will tell," while the Chinese government has only slightly backed down on its tough, nationalistic propaganda in recent days.

The US and China also remain far apart on important issues such as forced technology transfers and state research funding.

Both Trump and Xi have good reason to want an end to the trade war, however.

Trump is facing a tough fight for re-election in just over a year while Xi is just months off the 70th anniversary of the founding of the People's Republic of China.

The US leader has also threatened to raise tariffs to 25% on hundreds of billions of dollars of Chinese goods if talks don't go well.

Ahead of their meeting, Erdogan said delivery of Russia’s S-400 missile defense system to Turkey is proceeding without delay and there has been no setback in the deal with Moscow, Anadolu reported.

US President Donald Trump is set to meet with Erdogan soon, after his summit with Xi, amid a dispute between the two countries over Turkey's purchase of the Russian S-400 missile system.

US officials have warned Turkey that it would not be allowed to buy the US built F-35 stealth jet if it goes ahead with the missile system purchase, because the US believes the Russian system is incompatible with the F-35 jet -- and has argued that Moscow could use it to gather intelligence on the aircraft.

Erdogan is also expected to meet with UK Prime Minister Theresa May, Indian Prime Minister Narendra Modi and UN Secretary General Antonio Guterres on the second and final day of the G20 Summit. 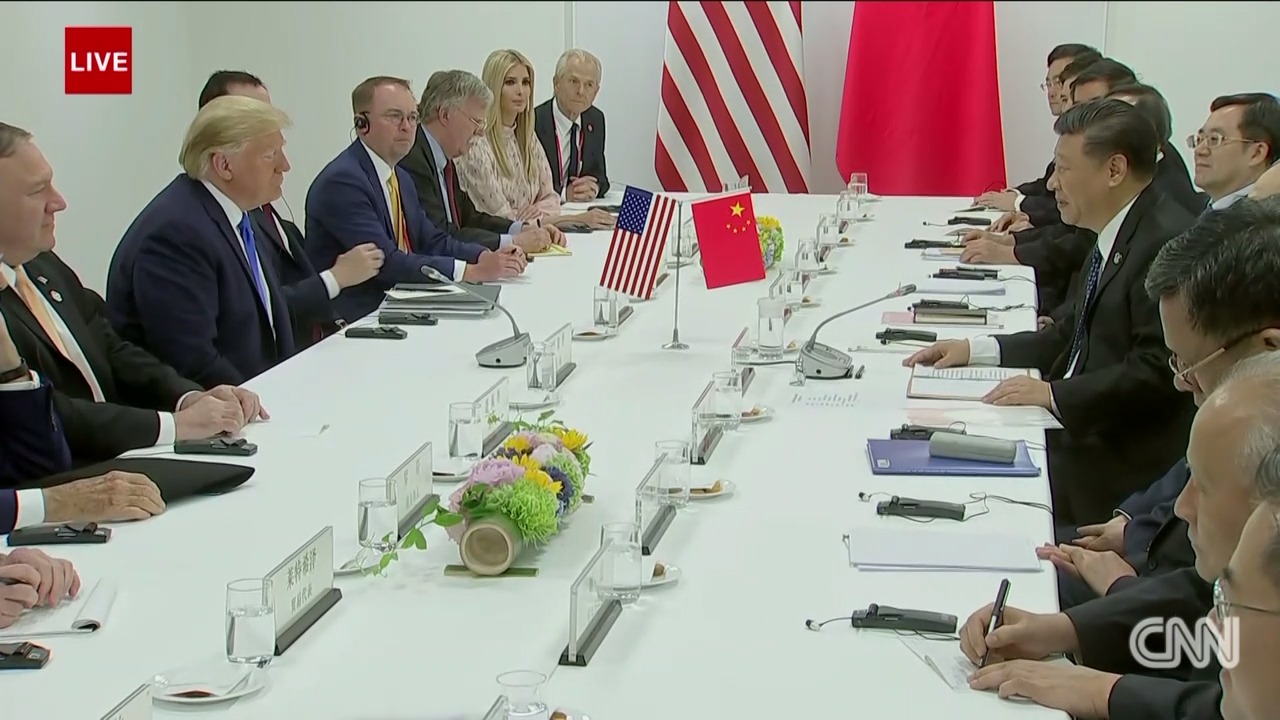 US President Donald Trump and Chinese President Xi Jinping are currently in a closed-door meeting, where they will discuss their year-long trade war.

Before they began the meeting, we got a look at the US and Chinese officials who are participating in the trade talks.

Here's who was in Trump's delegation:

Here are some of the people from Xi's delegation:

In June 2018, after months of threats, US President Donald Trump announced tariffs of 25% on $50 billion worth of Chinese goods.

Days later, Beijing retaliated with tariffs on $34 billion worth of US imports, which began in July, kicking off what would become a year-long trade war between the two major economies.

What started it: It was triggered by what Trump said were "very unfair" trade practices undertaken by China against the US, in particular the theft of American intellectual property and the wide trade deficit between the two countries.

Since then, the tit-for-tat trade tariffs have escalated, with hundreds of billions of dollars in US and Chinese exports now facing heavy tariffs on both sides of the Pacific.

Trade talks: Extensive trade talks between Washington and Beijing began following a Trump-Xi meeting in November 2018 at the G20 in Argentina, but unexpectedly collapsed in May, with both sides blaming the other.

More tariffs were imposed but now Xi and Trump are coming together in Osaka to see if a new ceasefire can be declared and trade talks restarted.

What to expect: How hopeful should the world be for a deal? "Time will tell," Trump said this morning.

Hu Xijin, editor-in-chief of the Chinese state-run tabloid the Global Times, is one of the most outspoken, pro-Beijing voices on Western social media.

In a post ahead of the meeting between US President Donald Trump and Chinese leader Xi Jinping, Hu said on his official Twitter that gave the summit a "51% chance" of success.

The "key 1%" according to Hu, can be attributed to the forthcoming presidential election. "Trump needs a deal more than he did last December. He knows he already got a lot from China," he said.

Earlier on Friday, Hu said that senior officials in China were increasingly of the view that Trump would have to back down "since the trade war that hurts the economy can't persist under the US political system."

"As long as China insists, the US will back down eventually," he said.

Sitting down for talks with US President Donald Trump, Chinese President Xi Jinping said he had been in "close communication" with the US leader.

"Mr President, you and I have stayed in close communication through phone calls and exchange of letters," he said.

"Today I am prepared to exchange views with you on the fundamental issues concerning the growth of China and the US relations so as to set the direction for the relationship in the period to come."

Xi said that since the normalization of relations between the two countries 40 years ago, "enormous changes" have taken place.

"But one basic fact remains unchanged -- China and the US benefit from cooperation and lose in a confrontation," he said.

"Cooperation and dialogue are better than friction and confrontation."

Speaking at the start of his meeting with US President Donald Trump, China's Xi Jinping said that he wanted to advance US-China relations with "cooperation and integrity."

He recalled the 1971 meeting in the Japanese city of Nagoya between US and Chinese table tennis players, which was widely seen as a thaw in previously chilly relations between the two countries.

"40 years ago, in 1971, in a place just over 100 kilometers from here, Chinese and American people participated in the 31st World Table Tennis Championships," Xi said.

"That marked the beginning of what we call 'ping-pong diplomacy.' The small ball played a big role in moving world events."

One year later in 1972, President Richard Nixon and Chairman Mao Zedong met in Beijing for historic talks which led to the establishment of formal diplomatic relations between the two countries.

There was no live coverage Saturday of the meeting between Trump and Xi on Chinese state-run media CCTV, or any of Beijing's broadcasters.

US President Donald Trump says he is optimistic a closely watched meeting with his Chinese counterpart can result in a historic trade accord.

“I will say that this can be a very productive meeting and I think we can go on to do something that will be truly monumental,” Trump said at the start of talks with President Xi Jinping, held on the margins of the G20 summit in Japan.

Trump said he’d befriended Xi though lengthy sessions spent together, and he was looking forward to securing some type of agreement.

“We’ve had an excellent relationship but we want to do something that will even it up with respect to trade,” Trump said.

Trump on trade talks: Referring to a breakdown in negotiations in May, Trump said the two sides were “very close and then something happened where it slipped a little bit, but now we’re getting a little closer.”

He said a deal would be “historic” if it could be reached, but offered no indication of concessions or outcomes from the session, which is now underway.

Trump declined to answer a question about the Chinese telecom giant Huawei.