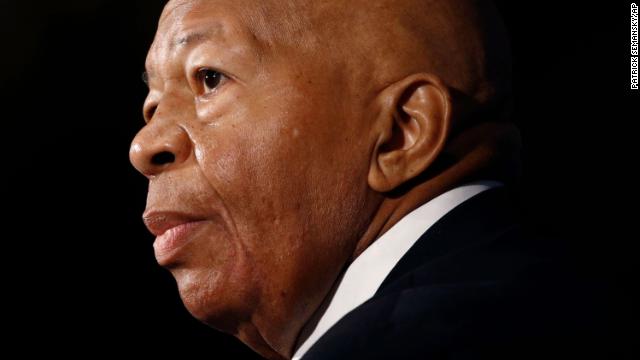 We're wrapping up our live coverage, but if you're looking for more on Rep. Elijah Cummings' service, you can...

Hundreds of people gathered this morning in Baltimore for the funeral service of the late Rep. Elijah Cummings — including former presidents and other powerful politicians who came to remember the congressman.

Cummings, a longtime Maryland Democrat and key figure leading investigations into President Trump, died last week at the age of 68. He was the first African American congressman to lie in repose at the Capitol.

Here's a look back at the service:

Bishop Walter S. Thompson Sr. said he saw Rep. Elijah Cummings on the morning that he signed a pair of subpoenas. It would be one of Cummings' last official acts.

About the subpoenas: In one of his last official acts before his death, Cummings signed two subpoenas for documents related to a temporary end to a policy change that allowed some immigrants with severe health issues to remain in the US.

Hours before his passing, staffers drove the subpoenas to Baltimore for Cummings' signature, said a Democratic committee aide.

"He was never complacent, for he knew that without clarity of purpose and a steadfast faith and a dogged determination demanded by our liberty, the promise of this nation could wither. Complacency, he knew, was not only corrosive for our collective lives, but for our individual lives," Obama said to applause.

"You're not a sucker to have integrity and to treat others with respect," Obama added.

Former President Bill Clinton said although the late congressman is gone, he should remain a constant voice of encouragement and courage.

Clinton said he loved "every minute" of his conversations with Rep. Elijah Cummings.

"I love every minute I ever spent with him, every conversation we ever had. But we should hear him now in the quiet times at night and in the morning, when we need courage, when we get discouraged, when we don’t know if we can believe anymore, we should hear him," Clinton said to applause.

Obama shared a story Cummings told about his father, Robert, who worked as a sharecropper.

They’d go to the airport not to board their planes, but to watch others do it. Robert would say, I have not flied, I may not fly, but you will fly one day. We can't afford it right now, but you will fly.

President Obama just took the stage to speak about Rep. Elijah Cummings. You can watch live above.

Speaking at the late Rep. Elijah Cummings' funeral in Baltimore this morning, former President Bill Clinton spoke to the congressman's dedication in defending the Constitution.

We all know now that at least until certain things happen, his legacy is how ardently he honored his oath to protect and defend the Constitution of the United States," Clinton said.

The congressman served as the chairman of the House Oversight and Reform Committee, one of the panels involved in the impeachment inquiry of Trump.

He oversaw a range of investigations into the Trump administration, from issues relating to the impeachment inquiry to the treatment of migrants at the southern border to the use of personal email for official use by White House officials to how a citizenship question was considered for the US census.