Even as Trump campaign leadership told staff on Monday that this election isn't over and they need to stay in the fight, they have offered no indication to staff that they will be employed into next week.

Campaign staffers are employed until Nov. 15 and have so far gotten no signal that their contracts will be extended despite the campaign's fundraising for a legal battle.

"They're saying, 'Stay in the fight!'" one campaign source told CNN. "Hard for people to stay in the fight when they'll be unemployed a week from today."

This source also said that campaign leadership made note of lackluster attendance at today's staff meeting, which was announced with just 15 minutes' notice.

With the uncertain prospect of continued employment with the campaign, many staffers are on the hunt for a new job. That too is getting some in trouble.

Soon after the staff meeting, campaign manager Bill Stepien's assistant shouted at a campaign staffer for printing their resume in the office.

Rep. Francis Rooney, a Republican from Florida, says President-elect Joe Biden has won the election and it’s time to “get on with the program.”

“There's an election. It appears that the [former] vice president won it,” he said Monday. “I don't see there's any way it could ever be changed in any of these states, maybe Georgia. So let's get on with the program.”

Rooney congratulated Biden on Twitter Sunday, while other Republicans have either urged President Trump not to concede or stayed silent despite no widespread evidence of fraud in the election.

“There will be books written about this hold that President Trump has over a lot of the Republican leadership and base. I don't understand it. It was never that way with previous Republican leaders. I think the peaceful transfer of power is a critical element of our democracy,” Rooney added. “To me, it's a little dangerous to have that much personal affiliation,” he said.

Rooney said he is optimistic that Biden and Senate Majority leader Mitch McConnell will be able to work together on some issues, saying Americans don’t want extreme left or right.

“I am thankful to see [Biden] make the case that clearly for a lessening of the partisanship, seeking civility, and the kind of discourse [where] we can agree to disagree, we don't have to hate," he said.

As the US nears 10 million coronavirus cases, President-elect Joe Biden and Vice President-elect Kamala Harris are being briefed by the transition Covid-19 advisory board in Wilmington, Delaware.

Biden's transition team earlier announced the group of public health experts that will make up his coronavirus advisory board.

The task force is chaired by:

Among the other thirteen members are:

National Security Council (NSC) officials have not received any guidance yet on the upcoming transition, according to several administration officials.

The NSC begins the transition early since it typically leads the process that other agencies will follow. The NSC, like other agencies, also works with highly classified information, which requires special protocol during a presidential transition.

While the Biden transition team awaits ascertainment, under federal guidelines, NSC officials – among them political appointees who will be leaving come January, and career officials who will stay on and continue their service after President-Elect Biden takes office – say they’ve received no guidance from outgoing national security adviser Robert O’Brien about the status of their work or how they should proceed in the coming months.

“I think it’s going to be messy,” one of the officials told CNN, anticipating very little guidance from Trump principles.

Speaking on Fox News radio, Senate Judiciary Chairman Lindsey Graham continued to side with President Trump as he fights the election results, saying that they need to look into the results in Arizona, Georgia, Michigan and Pennsylvania.

"We've got to prove system failure in Pennsylvania," Graham said.

"It would be insane for President Trump not to look at all the stuff," Graham said, arguing "it would give credibility" to Biden if Trump's challenges fall short.

So far, no credible evidence of widespread election fraud has been presented.

"I don't know if it will flip the election, it deserves to be looked at... and this election is by no means over," Graham said.

Graham also said if the GOP keeps the Senate, he will urge Mitch McConnell to probe mail-in voting.

“If we keep the Senate, we need to do a joint committee in the Senate to analyze mail-in balloting and how it worked in 2020," he said.

And if Trump ultimately loses his court cases, Graham said he wants Trump to "consider running again to create an organization — a platform to keep his movement alive."

Graham added: "I would encourage him to think about" running again.

"Grover Cleveland came back and Donald Trump should think about it," Graham said.

New York City Mayor Bill de Blasio said the Biden and Harris administration will bring "clear national leadership" to the fight against Covid-19, adding that he, along with many New Yorkers, feels a weight lifted in light of their projected win.

The mayor added that he is so happy that he can "now say the words congratulations president elect Joe Biden and Vice President Elect Kamala Harris.”

“Not only do we have leaders who are going to move us forward,” but he said Biden is a leader who is “going to get so much done to put this country back on its feet and heal this nation.”

“That’s who he is, that’s the kind of person he is," the mayor said.

He added that the nation and city will have “clear national leadership in fighting the coronavirus,” and a “clear strategy we can believe."

With the new administration, de Blasio said, there will be “a vaccine we can trust,” and finally a “stimulus that will put us back on our feet.”

He said many people in New York City are feeling a “weight lifted” and “putting behind us what has been such a painful and divisive time for our nation, for our city.” The mayor said he feels a sense of “calm” and “peace” that he hasn’t felt for a long time.

CNN asked viewers how they were feeling after the election — a race that was too close to call until Saturday morning when CNN and other media outlets projected Joe Biden as the next president of the United States.

Vice President-elect Kamala Harris will be the nation's first Black and South Asian vice president, and first woman to hold that office.

We received almost 40,000 responses in audio and writing.

Listen to what they said: 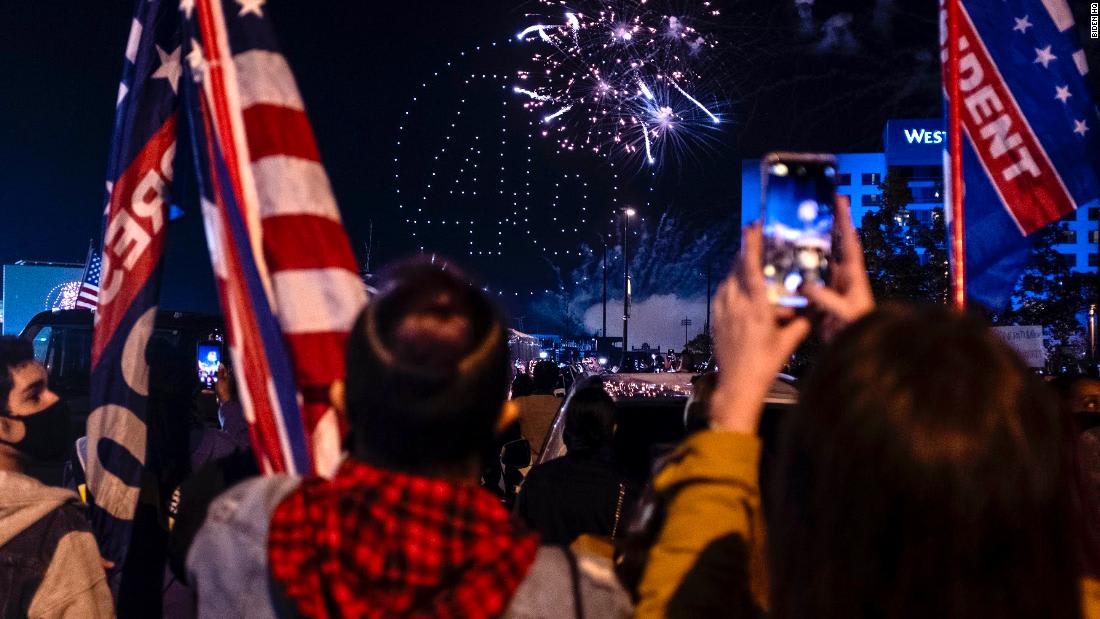 You can read more of what our viewers told us here.

President-elect Joe Biden will soon arrive at The Queen theater in Wilmington, Delaware, for a briefing by the transition Covid-19 advisory board.

Earlier: Biden's transition team announced the group of public health experts that will make up his coronavirus advisory board, which includes Rick Bright, a whistleblower from the Trump administration who alleged that his early warnings about the pandemic were ignored and ultimately led to his removal.

Revealing the members of the pandemic task force is the transition's first major announcement, highlighting how important the President-elect finds combating the deadly virus which has taken more than 230,000 lives in the United States.

The announcement also comes as the nation nears 10 million cases, with over 9.9 million reported cases as of Sunday evening, according to Johns Hopkins University data.

Mexico’s President Andrés Manuel López Obrador repeated Monday his earlier position on waiting to react to the outcome of US presidential election results.

López Obrador said he wants to wait until US authorities decide the winner.

In his morning news conference, the president said, “I want to inform the people of Mexico that regarding the US elections the stance of our government is to wait until the US authorities in charge of the electoral process, decide the winner of the presidency.”

He added, “we cannot act in an imprudent manner.”

President López Obrador said the constitution of Mexico establishes non-intervention when it comes to the determination of other countries politics. “We have to be respectful of the decision taken by people’s and that foreign countries take. This doesn’t mean we’re in favor or against anyone”, adding, “so we want to act with prudence and will wait.”

He said, “We have a good relationship with the government of President Donald Trump”, but added he has no issues with President-elect Joe Biden. “We aren’t against the possible president elect or for now candidate Biden.”

When asked by a journalist if he thought this would hurt his position with the US, López Obrador said no. “We act with prudence and with time we will know who will be the next president and we will establish a relationship which won’t be bad in any case," he said.

President López Obrador said Mexico is not against the Republican or Democratic party in the US. Our party is Mexico, he said.