The Trump campaign is filing a lawsuit to stop vote counting in Georgia, a campaign official said. It is unclear whether the suit will be successful.

"President Trump and his team are fighting for the good of the nation to uphold the rule of law, and Georgia’s law is very clear: to legally count, mail ballots must be received by 7:00 p.m. on Election Day. That’s still the law, even after Democrats sued earlier this year to extend the deadline and delay Election Day—President Trump and Republicans fought to uphold Georgia law, and we won," Trump Deputy Campaign Manager Justin Clark said in a statement.

Clark went on to say that "a Republican poll observer in Georgia witnessed 53 late absentee ballots illegally added to a stack of on-time absentee ballots in Chatham County. We will not allow Democrat election officials to steal this election from President Trump with late, illegal ballots. President Trump and the Georgia Republican Party have filed suit to require all Georgia counties to separate any and all late-arriving ballots from all legally cast ballots to ensure a free, fair election in which only legal, valid ballots count."

Separately, David Shafer, the chairman of the Georgia state GOP, tweeted a short time ago, "I have authorized lawyers for the Georgia Republican Party to file an emergency petition against the Chatham County Board of Elections to enforce election laws and prevent the unlawful counting of absentee ballots received after the election."

Trump advisers are nervously watching the final returns in Georgia, and have been taken aback by Biden's performance in what was thought to be a GOP stronghold. Both Trump advisers said African American turnout in Georgia for Biden are exceeding their expectations, resulting in a very tight race.

Still, both advisers believe Trump has a better chance of closing the gap in Arizona than Biden has in Georgia.

At the State Farm Arena in Atlanta, Georgia, counters and adjudicators are in heavy presence as absentee ballot vote counting is underway.

This is how the process works:

Adjudicators look at ballots that may be controversial because they may be signed incorrectly or they may not properly indicate the intent of the voter. They decide if that vote in question should be counted.

The workers sort the ballots, they then count the ballots, and then elsewhere in the room, the adjudicators — the Republican, the Democrat and the independent —look out for mistakes.

“The most typical mistake they see on a ballot is a mistake that's done on purpose. And that is people sign Mickey Mouse or Donald Duck in the write-ins,” CNN’s Gary Tuchman reports. “That's a more common thing that we see in some of these counties.”

In the neighboring DeKalb County, they had groups of four adjudicators. They worked together — one Republican, one Democrat, two independents. They then vote on whether a ballot is OK, that its intent can be ascertained. The vote is usually unanimous but if it’s 2-2, they call an election supervisor in the room to break the tie but that’s rarely an issue.

Where the race stands: President Trump is leading in Georgia but his lead has decreased through the day as more absentee ballots get counted.

“There is a mathematical chance that with the 235,000 votes that need to be counted that something could change in the race. As you know, you have to be very careful with making that assumption,” Tuchman reported.

CNN's Gary Tuchman explains the process and takes viewers behind the scenes:

Here’s what we know about the remaining votes in Georgia's Gwinnett County, a suburban county northeast of Atlanta.

President Trump's lead in Georgia has shrunk as more votes continue to be tallied in Fulton County, home to Atlanta, CNN's Wolf Blitzer said this evening.

Despite what Trump may think, there aren't any "nefarious things going on" with the vote counting process in places like Fulton County, CNN's John King said.

"Republicans and Democrats and independents [are] in every one of these rooms across America, red state, and blue states counting the votes," King said. "In these predominantly Democratic counties, populous counties, Atlanta, Fulton County, 10% of the vote statewide, will come out of this one county, we'll get more votes later today."

Nevada election officials say they expect to release more election results on Thursday from the battleground state where six electoral votes hang in the balance.

Of the 1.2 million ballots sent to Clark County voters, records show 413,000 have been returned so far, of which officials have processed 337,000. But ballots postmarked by Nov. 3 will still be counted if they are received by Nov. 10. It is not known how many more ballots are yet to be received.

Clark County Registrar Joe Gloria confirmed Wednesday afternoon he will not release the number of mail-in ballots dropped off on Election Day, as well as those delivered by the US Postal Service on Nov. 3 and 4 until Thursday morning.

Asked late Tuesday if mail-in ballots could potentially flip the election, Gloria replied “…it all depends on the margin of victory, but certainly that is a possibility.”

The county is also still processing provisional ballots, those sent to voters overseas, disabled voters and those from new residents. Nevada is one of 19 states that allows same-day voter registration.

In Washoe County, home to the city of Reno and the state’s second most populous county, the registrar of voters said all Election Day in-person votes and ballots received on Tuesday have been processed.

The county registrar said more than 21,000 votes were counted on Election Day and another 9,000 mail-in and ballots placed in drop boxes are being tallied.

Philadelphia’s ballot counting process is an open and transparent one, Pennsylvania Gov. Tom Wolf said during a news conference Wednesday evening when asked about the Trump campaign lawsuit to stop the state’s counting of ballots.

Philadelphia has been streaming ballot processing from the pre-canvassing period, he said.

“I think it's being live streamed on their website, so I guess you can get it, anybody can get it anywhere in the world, so I'm not sure how that equals a lack of transparency. It seems to me it’s never been more transparent than it is right now," the governor said

Pennsylvania Secretary of State Kathy Boockvar said she couldn’t speak to ongoing litigation, but the state will “oppose every effort to at any point shut down the vote.”

“We get to decide when the last vote is counted,” she said, adding the state doesn’t have “any anticipation that the vote count is going to stop.”

All of the votes in Fulton County, the most populous in Georgia which includes Atlanta, will be counted by the end of night, promised the county's elections director Richard Barron this afternoon.

Barron said there are still 36,000 mail-in ballots to be counted in the county.

"We are going to finish tonight," he told reporters. "As long as it takes, we are going be here, that's why we're bringing in fresh bodies."

He added it would probably be after midnight by the time the ballots make it through adjudication.

The biggest challenge at the moment, according to Barron is limited space in the elections facility. He suggested he may try to squeeze more tables in to the room to allow manual opening of envelopes containing mail-in ballots.

Barron said he expected his team will have counted more than 142,000 votes by the evening's end.

There has been no formal communication between Joe Biden and President Trump today, a person close to Biden said.

Biden didn’t mention the President in his remarks here, even as he extended an olive branch to Trump supporters and pledged to be the president for all Americans – whether they voted for him or not.

But Biden’s tone was unmistakable today – he did not aggressively go after the President or talk about him in a mocking tone as he often did on the campaign trail. He did not attack him on Twitter. A positive tone was set – even as they put teams of lawyers in place to prepare to challenge Trump’s lawsuits.

If tradition holds, the two men will have to talk at some point – when a winner is known.

The Biden campaign says that if that time comes, they know how to reach Trump – they still have the number of the White House. 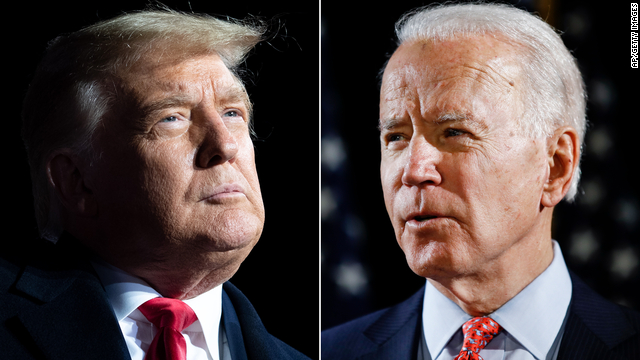 The world was well aware that the US presidential election was unlikely to conclude quickly.

Record early and mail-in voting meant that America’s allies would have to sit tight and wait to see which of the wildly different candidates would occupy the most powerful office on earth for the next four years.

Even if incumbent President Trump were a traditional candidate who could be trusted to respect the election result, any diplomat worth their salt would remain tight-lipped until they knew exactly who they’d be dealing with at NATO, the United Nations and every other international forum. Commenting on another country’s electoral process before it’s complete is not common; neither is the incumbent prematurely declaring victory and making up his own election rules.

This election matters more to US allies than any other in recent memory. It’s frankly impossible to do anything significant on the world stage without the president’s buy-in, and Trump has a clear view of America’s role in the world: He pulled out of the World Health Organization in a pandemic. He talks about withdrawing funding for NATO, music to Russia and China’s ears. He tore up a treaty that stopped Iran from making nuclear weapons and withdrew from an agreement on climate change.

No matter how difficult Trump is to deal with, a good relationship with the White House is essential. It does, however, put allies in a tight spot when Trump decides to attack the democratic process itself. Dominic Raab, Britain’s foreign secretary, has already faced backlash for refusing to condemn Trump’s wild claims. He tweeted sheepishly later that the “UK-US relationship is in great shape and we are confident it will go from strength to strength whichever candidate wins the election.”

The bigger picture: Over the past four years, it’s become clear that Trump has no problem with punishing people he feels besmirch him.

Suggesting that he might be trying to delegitimize the election is probably a swift way to get allies taken off his Christmas card list. So after decades of criticizing other countries when a fair democratic process appears to be under threat, most of America’s friends are waiting this one out in silence.

Allies will be quick to start building relationships with a President-elect Joe Biden if that’s how this shakes out. But right now, they cannot risk upsetting sitting President Trump. And the longer the battle for the presidency goes on, the more awkward that silence could be to maintain.