Sen. Kamala Harris has said she would take executive action on guns in the first 100 days of her presidency.

Harris was just asked if Biden has a point. The former vice president jumped in before Harris could answer. "Some things you can, many things you can't," he said.

"In general, assault weapons are semi-automatic firearms with a large magazine of ammunition that were designed and configured for rapid fire and combat use," the Justice Department said at the time.

That law expired in 2004, and has never been renewed.

Julián Castro and Joe Biden, who both worked for former President Barack Obama, got into a heated debate over his legacy on health care.

"Barack Obama's vision was not to leave 10 million people uncovered. He wanted every single person in this country covered. My plan would do that, your plan would not," Castro said.

Biden defended his plan, saying people "don't not have to buy" into his plan. But Castro challenged him, responding, "You just said that two minutes ago."

During the exchange, Castro went further, saying to Biden, "Are you forgetting what you said just two minutes ago."

They went back and forth on their plans.

Castro then took a jab at Biden, saying, "I am fulfilling the legacy of Barack Obama and you are not."

Biden didn't hold back and told Castro, "That would be a surprise to him."

Former Vice President Joe Biden has had the most talk time so far, with more than 8 minutes. Here's where the rest of the candidates stand: 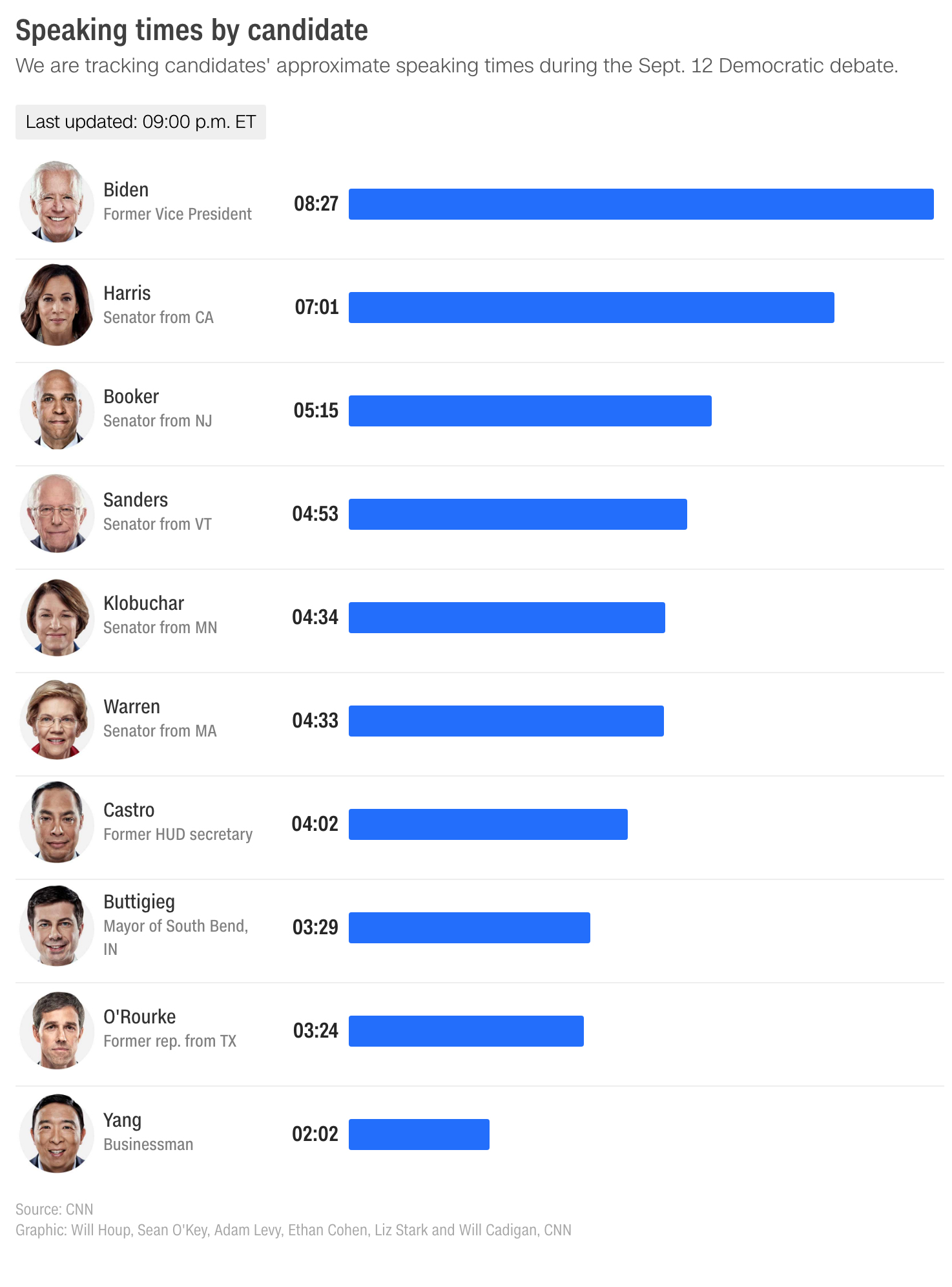 Former Housing and Urban Development Secretary Julián Castro personalized the early August mass shooting in El Paso, pointing out that the gunman, who police have described as a white supremacist, targeted Latinos.

“White supremacy is a growing threat to this country, and we have to root it out,” he said.

Policy disagreements between Elizabeth Warren and Joe Biden stretch back more than a decade, to when she was a consumer advocate and Harvard Law School professor and he was the long-time senator representing Delaware.

Warren, back in 2005, was an academic who studied the ability of people to repay loans in times of medical hardship and unexpected job loss. Biden represented Delaware, home to many credit card companies.

A clip from C-Span of Biden (as a senator) squaring off against Warren (as a consumer advocate) shows how much they differed on the issue.

"You're very good, professor," he said at one point, after challenging her about whether credit card companies should be forced to lower rates.

The law, which Biden had come to support after he said it was made more friendly to consumers than previous versions, made it much more difficult for people to declare bankruptcy, according to CNN's reporting at the time. It took away the leeway of bankruptcy judges to sidestep income to debt ratios in deciding repayment plans.

How much more difficult did it become to declare bankruptcy?

In the year after the law was passed, there were more than 2 million individual bankruptcy filings. In the first year the law was in effect, there were less than 600,000, according to historical data maintained by the American Bankruptcy Institute. Filings shot up again to more than a million from 2008 to 2013 during and after the Great Recession. But they've fallen again in recent years; 773,375 people declared bankruptcy in 2018, according to an annual report from Chief Justice John Roberts.

Warren actually cites her research on bankruptcies and the passage of this bill as the issue that turned her from conservative to liberal. It set her on the path to leaving academia and entering politics. This year, Warren is again talking about bankruptcies. She wants to cut down on private equity loading companies up with debt and then using bankruptcy as way to cut it loose. It's part of a larger plan she has to rein in Wall Street.

But this issue also shows how the party has changed even over the past ten years. More difficult to imagine a Democrat voting for such a bill today and it's that kind of party change that Biden continues to reckon with.

It's also a good reminder that Warren came to politics relatively recently and had a singular issue on which she lobbied for years.

Presidential candidate Andrew Yang joked about being Asian at Thursday’s debate during an exchange about "Medicare for All."

“Now, I am Asian, so I know a lot of doctors,” Yang said. He noted, as president, he would try to control soaring costs that doctors warn him against.

It was not the first time Yang has joked about being Asian. He often tells audience that the biggest change from Donald Trump would be an “Asian guy who likes math.”

The comments, while usually winning laughs, were not universally celebrated on Twitter.

Jonathan Yuan, a student at the Harvard Kennedy School tweeted, Yang “please stop it with the lame Asian jokes. Not helping any of our causes. It’s in fact, an embarrassment.”

Pete Buttigieg and Julián Castro just got into a spat ... about on-stage spats.

After Castro and Joe Biden argued about former President Barack Obama's legacy, Buttigieg jumped in to bemoan the in-party fighting.

"This is why presidential debates are becoming unwatchable," Buttigieg said. "This reminds everybody of what they can not stand about Washington — scoring points against each other, poking at each other and telling each other that you're, my plan..."

That's when Castro interrupted him.

Amy Klobuchar then seemed to get the last word: "But a house divided can not stand," she said.

As the debate over “Medicare for All” looked ready to blow, Sen. Kamala Harris pulled the safety valve.

“Let’s talk about the fact that Donald Trump came into office and spent almost the entire first year of his term trying to get rid of the Affordable Care Act,” the California Democrat said, recalling the unified Democratic pushback against Republican efforts to repeal Obamacare.

She then reminded viewers that Obamacare is still under attack.

“Fast forward to today and what is happening? Donald Trump’s Department of Justice is trying to get rid of the Affordable Care Act,” Harris said, referencing a lawsuit headed to the Supreme Court.

Before she sought to pivot the debate away from her rivals on stage, Harris, who initially backed Sanders’ single-payer bill before offering a plan of her own, argued that there was no tension in supporting both Obamacare and Medicare for All – because both were aimed at the same target: expanding care.

Minnesota Sen. Amy Klobuchar opened the third Democratic debate on Thursday by hitting Vermont Sen. Bernie Sanders, who often notes how he “wrote the damn bill” on "Medicare for All," the sweeping policy proposal that would remake the United States health care system.

“While Bernie wrote the bill, I read the bill,” Klobuchar said.

Klobuchar went on to say, in her reading of the bill, she noted that the bill would mean people will “no longer have private insurance as we know it.”

Sanders touted his Medicare for All plan on Thursday, defending it against questions about cost and the fact that Americans with private insurance will lose their current private coverage under Medicare for All.