The final question of the night is all about unusual friendships.

CNN's Anderson Cooper brought how Ellen DeGeneres and George W. Bush were spotted at a football game together. DeGeneres faced criticism for being friends with the conservative former president — in response, she said, "I think that we've forgotten that that's OK that we're all different."

"So in that spirit, we'd like you to tell us about a friendship that you've had that would surprise us and what impact it's had on you and your beliefs," Cooper said.

Here's how each of the 12 Democrats responded:

The laugh came after Biden said he had helped her get the votes needed to pass the 2010's Dodd-Frank Act, under which the Consumer Financial Protection Bureau was established.

"I agreed with the great job she did, and I went on the floor and got you votes. I got votes for that bill. I convinced people to vote for it, so let's get those things straight, too," Biden said.

Biden interrupted, saying, "You did a hell of a job in your job." To which, Warren said, "Thank you."

Democrats, appalled by the fact that President Donald Trump has already successfully appointed two people to the Supreme Court and could be in line to appoint more, debated ways to remake the Supreme Court on Tuesday, with former Vice President Joe Biden, South Bend, Indiana, Mayor Pete Buttigieg and other disagreeing about the best way forward.

Biden, rebutting what Buttigieg has proposed about packing the court, said that he would not seek to add more justices.

Buttigieg responded: “I’m not talking about packing the court just with people who agree with me, although I certainly will appoint people who share my values.”

Buttigieg has suggested a host of changes to the Supreme Court, including a commission that would aim to de-politicize the nation’s top court.

“One way to fix this would be to have a 15-member court where 5 of the members can only be appointed by unanimous agreement of the other ten,” he said. “Smarter legal minds than mine are discussing this in the Yale Law Journal and how this could be done without a constitutional amendment.”

Former Housing and Urban Development Secretary Julián Castro said, while he wouldn’t pack the court, he would back term limits.

“The smarter move might be to look at term limits or having people cycle off from the appellate courts so that you would have a replenishment of perspective,” he said.

Massachusetts Sen. Elizabeth Warren said she is interested in “a number of options” to fixing the court, but did not outline her specific proposals to do so and instead pivoted to the importance of Roe v. Wade.

Biden had touted his record in former President Barack Obama’s administration, pressuring Republicans to vote for measures such as the Federal Stimulus act.

“We all have good ideas. The question is who is going to be able to get it done? How can you get it done?” Biden said. “And I'm not suggesting they can't, but I'm suggesting that's what we should look at. And part of that requires you not being vague.”

“Joe, you talked about working with Republicans and getting things done. But you know what, you also got done, and I say this as a good friend,” Sanders said. “You got the disastrous war in Iraq done. You got a bankruptcy bill, which is hurting middle class families all over this country. You got trade agreements like NAFTA and (trade relations) with China done, which have cost us 4 million jobs.”

Warren, responding to Biden’s assertion that he is best able to get things done, pointed to her role in creating the Consumer Financial Protection Bureau during Obama’s administration.

Biden interjected, saying, “I went on the floor and got you votes. I got votes for that bill. I convinced people to vote for it, so let's get those things straight, too.”

“I am deeply grateful to President Obama, who fought so hard to make sure that agency was passed into law,” she said.

We are more than two hours into tonight's Democratic debate, and Sen. Elizabeth Warren is still out front with the most speaking time so far. 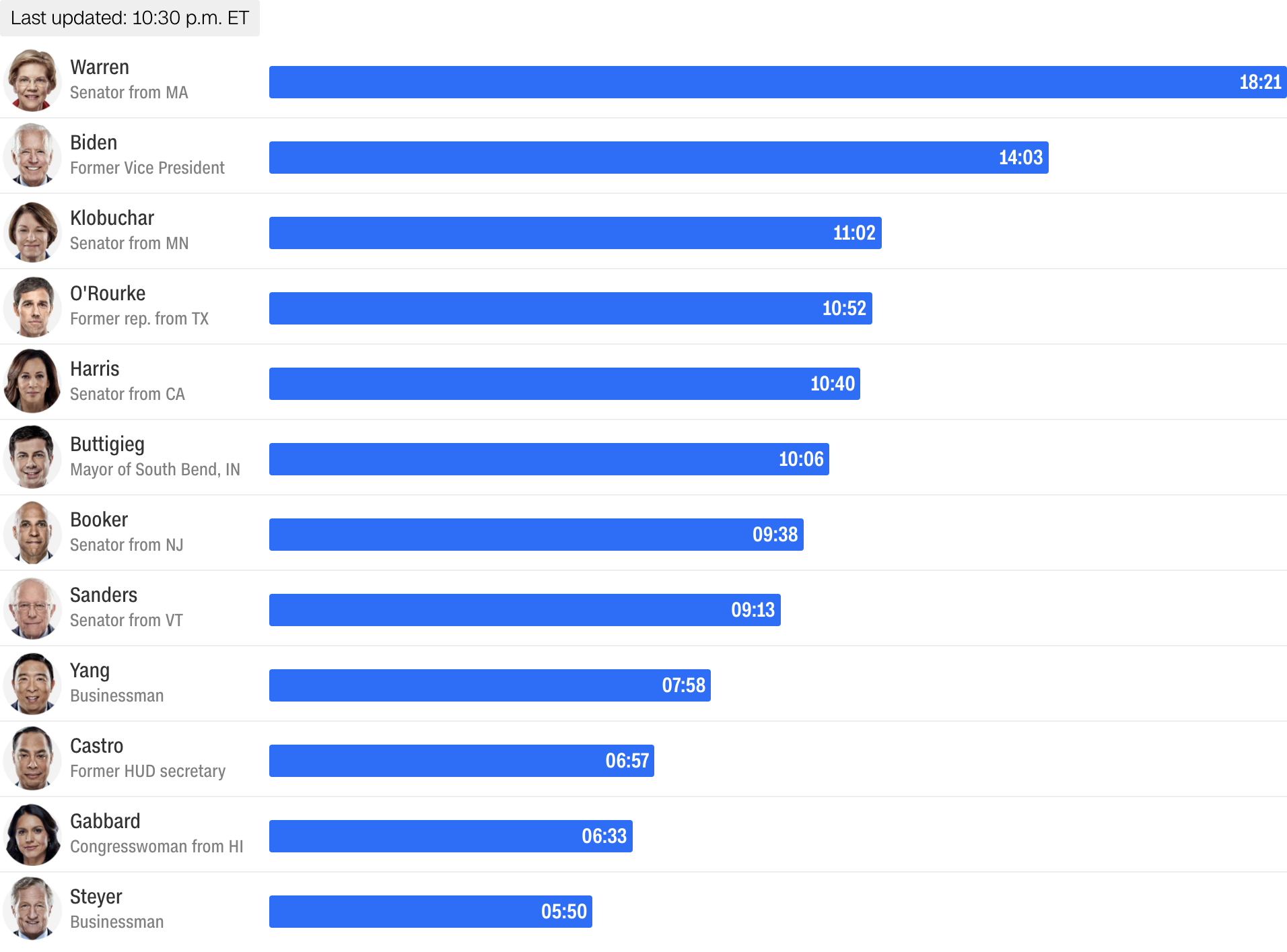