Sen. Elizabeth Warren and Facebook have been locked in a days-long feud over the company’s policy allowing candidates to lie in political ads. After Facebook declined to remove an ad by President Donald Trump that contained unfounded allegations against former Vice President Joe Biden, Warren last week ran her own Facebook ad falsely claiming the tech giant had endorsed Trump’s re-election campaign. The point of the lie, Warren said, was to “see just how far” the policy goes — arguing Facebook prioritizes profits over the truth.

Facebook has said it believes all speech by politicians should be protected from censorship. On Saturday, it doubled down on that stance in a rare tweet addressing Warren directly. The company compared itself to broadcasters regulated by the Federal Communications Commission, saying “we agree it’s better to let voters – not companies – decide.” The move opened the door to deeper scrutiny of Facebook’s role in handling political speech, particularly as it struggles to address weaknesses that made it a vector for Russian election interference in 2016.

Former President Jimmy Carter recently said he could not have undertaken the duties of the presidency at 80 years old. But former Vice President Joe Biden said he knows he can.

"I know what the job is. I've been engaged. Look, one of the reasons I'm running is because of my age and my experience, with it comes wisdom. We need someone to take office this time around who on day one can stand on the world stage, command the respect of world leaders from Putin to our allies, and know exactly what has to be done to get this country back on track," Biden said.

Biden then made the case why he thinks he should be president.

"It is required now more than any time in any of our lifetimes to have someone who has that capacity on day one," he said.

If Joe Biden, Elizabeth Warren or Bernie Sanders win the presidency, they will become the oldest president ever inaugurated.

Here's the breakdown of the candidates' ages: 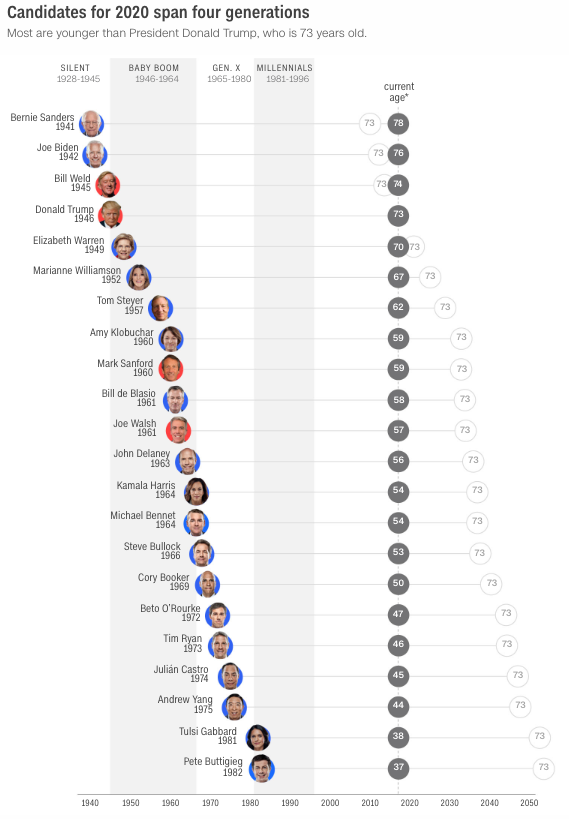 Sanders, who is 78 years old, was asked how he can assure voters that he can handle the stress of the presidency. In response, he invited voters to attend campaign events and see him in person.

"We are going to be mounting a vigorous campaign all over this country. That is how I think I can reassure the American people," he said.

Sanders then thanked those who wished him well during his recovery — including many of his 2020 rivals:

"Let me take this moment if I might to thank so many people from all over this country, including many of my colleagues up here, for their love, for their prayers, for their well wishes. And I just want to thank you from the bottom of my heart, and I'm so happy to be back here with you this evening.

“You just made it clear that you don’t know how this is going to take weapons off the street,” he said. “If you can develop the plan further, we can have a debate. But we can’t wait.”

The former Texas congressman responded that mass shootings are a “crisis” and that Democrats should make the case for farther-reaching gun control measures. “Let’s decide what we are going to believe in, what we are going to achieve, and let’s bring this country together in order to do that,” he said.

“The problem isn’t the polls, the problem is the policy. And I don’t need lessons from you on courage, political or personal.”

“I don’t care what that meant to me or my candidacy,” O’Rourke replied. But to survivors of gun violence, and March For Our Lives, the gun control advocacy group founded by students after the Parkland, Florida, shooting last year, “that was a slap in the face to every single one of those groups,” he said.