Amy Klobuchar is deeply unimpressed with Pete Buttigieg's criticism of Washington and his promise to deliver change from the outside.

She made her point, again, on Friday by highlighting his remarks on impeachment, which he has described as an exhausting process that turns off voters.

"You said it was exhausting to watch and that you wanted to turn off the channel and watch cartoons," Klobuchar said, arguing that elected officials in Washington have been called on to "lead" during a difficult time.

"I think that going after every single thing that people do because it's popular to say and makes you seem like a cool newcomer -- I just don't think that's what people want right now," Klobuchar said, before dropping the hammer:

"We have a newcomer in the White House," she said, "and look where it got us.”

Joe Biden launched the attack his aides had previewed all day early in the debate Friday, criticizing the cost and political feasibility of Vermont Sen. Bernie Sanders’ “Medicare for All” proposal.

He also said Sanders' plan could never clear the Senate.

“I busted my neck getting Obamacare passed, getting every Democratic vote. I know how hard it is,” Biden said.

Sanders responded that United States health care spending is out of control, and that his plan would actually reduce its overall cost.

Republican Sen. Mitt Romney got a round of applause at the Democratic debate in New Hampshire Friday night for voting to convict President Donald Trump.

Amy Klobuchar was the first to mention Romney's vote, followed late by Bernie Sanders. Both times the crowd cheered.

Amy Klobuchar on Friday criticized her Democratic opponents over their support for "Medicare for All," and advocated for building on the Affordable Care Act and adding a public option.

“I keep listening to the same debate, and it is not real,” Klobuchar said, after Bernie Sanders on stage touted Medicare for All, which would create a government-run health care plan and essentially eliminate the private insurance industry.

“It is not real, Bernie,” Klobuchar continued, “because two-thirds of the Democrats in the Senate are not on your bill, and because it would kick 149 million Americans off their current health insurance in four years.”

“Elizabeth (Warren) wants to do it in two years, and Pete (Buttigieg), while you have a different plan now, you sent out a tweet just a few years ago that said henceforth, forthwith, indubitably, affirmatively, you are for Medicare for All for the ages.”

“And so, I would like to point out that what leadership is about is taking a position, looking at things and sticking with them,” the senator said.

Klobuchar said she has long believed that the way to expand health care in the US and reduce premiums is by building on the Affordable Care Act with a non-profit public option.

“The Affordable Care Act is now nearly ten points more popular than the President of the United States,” Klobuchar said. 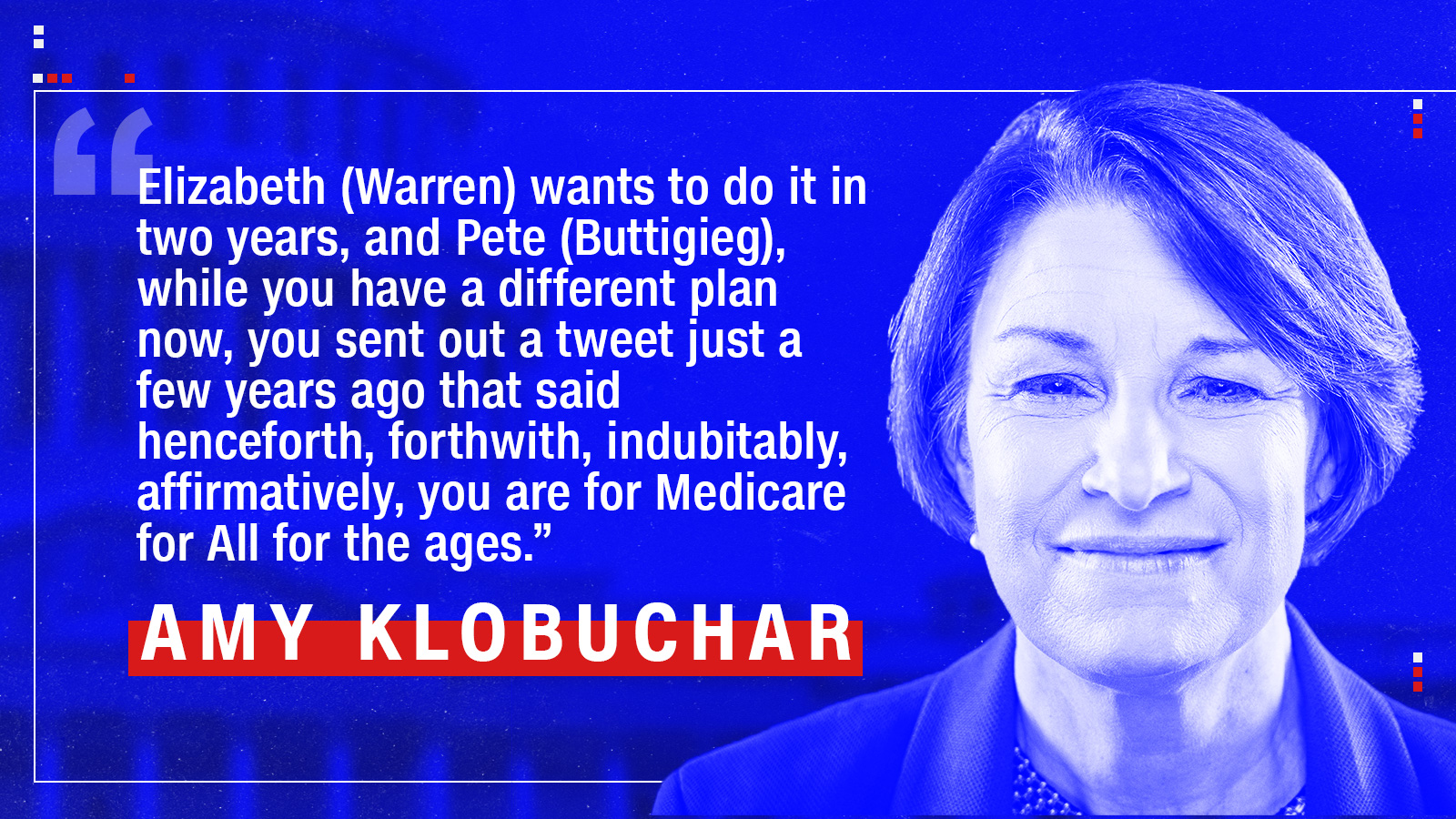 Biden listed a host of achievements throughout his career, including the Violence Against Women Act, the recovery plan under President Barack Obama and his call for same-sex marriage before the Obama administration was for it.

“I don't know what about the past of Barack Obama and Joe Biden was so bad,” Biden said. “What happened? What is it that he wants to do away with?”

Buttigieg shot back by implying Biden was not up for the current moment.

“Those achievements were phenomenally important because they met the moment,” Buttigieg said. “But now we have to meet this moment. And this moment is different.”

Biden and his campaign had previewed this attack on Buttigieg, suggesting that he lacked the experience and knowledge to take on President Donald Trump.

Pete Buttigieg and Bernie Sanders sparred early in the debate over the best way to bring people together, with the former South Bend, Indiana, mayor arguing the Vermont senator is too focused on purity.

Sanders pushed back by arguing that he never said he can’t compromise with people that don’t agree with him, but added that he believes the way to bring people together is by proposing large scale changes that help most Americans.

“We have got to bring as many people as we can into this process,” Buttigieg said, adding that his ��opponent” is “saying if you don't go all the way to the edge or it's out. politics that say it's my way or the highway.”

When asked directly if he is referring to Sanders, Buttigieg said, “Yes.”

“Needless to say, I never said that,” Sanders said, adding that he believes, "the way you bring people together is by presenting an agenda that works for the working people of this country, not for the billionaire class."

Buttigieg and Sanders are locked in a tight race in Iowa, with the mayor leading the senator by one-tenth of one percent with 100% of the results in.

Sen. Elizabeth Warren asked Americans to vote against "a government right now that works great for those at the top."

"When you see a government that works great for those who can hire armies of lobbyists and lawyers and make big campaign donations and it's not working so great for everyone else, that's corruption pure and simple and we need to call it out for what it is," Warren said.

Corruption and party unity have been central themes to Warren's 2020 campaign. 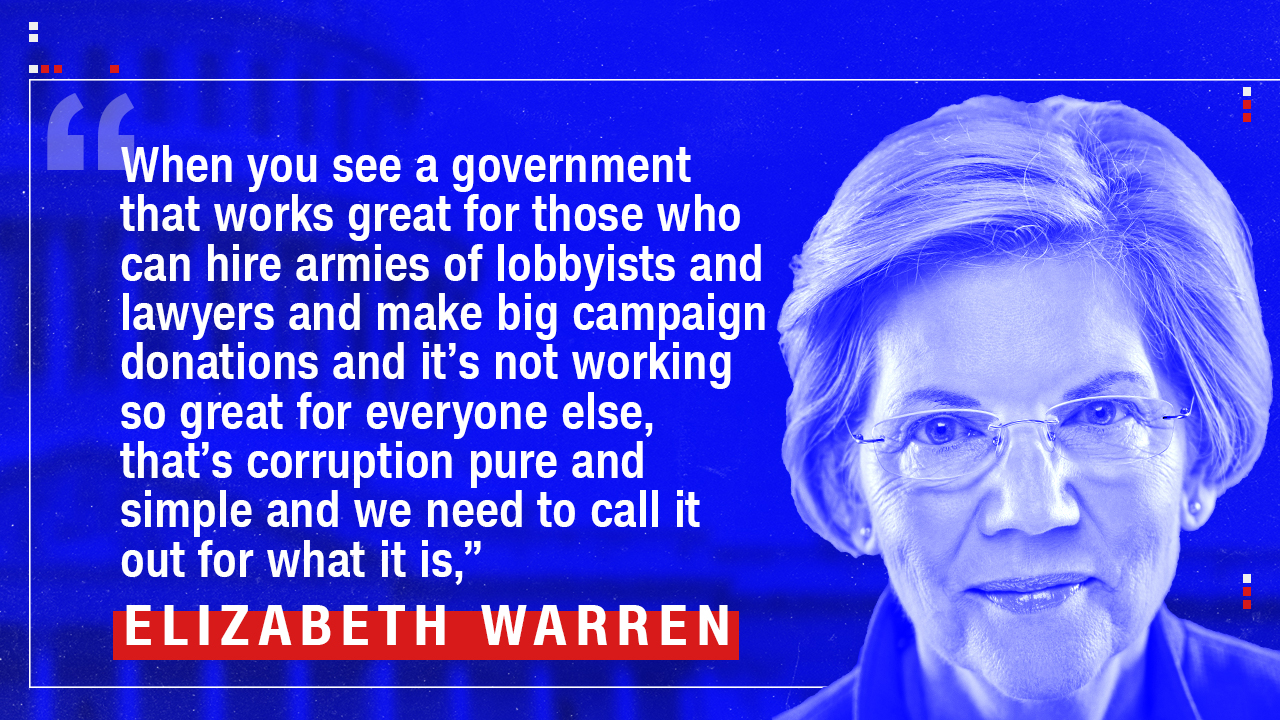 "Because Donald Trump lies all the time," Sanders said, before noting that the President has said "terrible things" about nearly all the candidates on the stage beside him.

Sanders then pivoted to his take on how Democrats should take on Trump, by uniting the working class and driving historic voter turnout levels.

He also sounded a note of party solidarity.

"No matter who wins this damn thing," Sanders said, "we're all going to stand together to defeat (Donald Trump)." 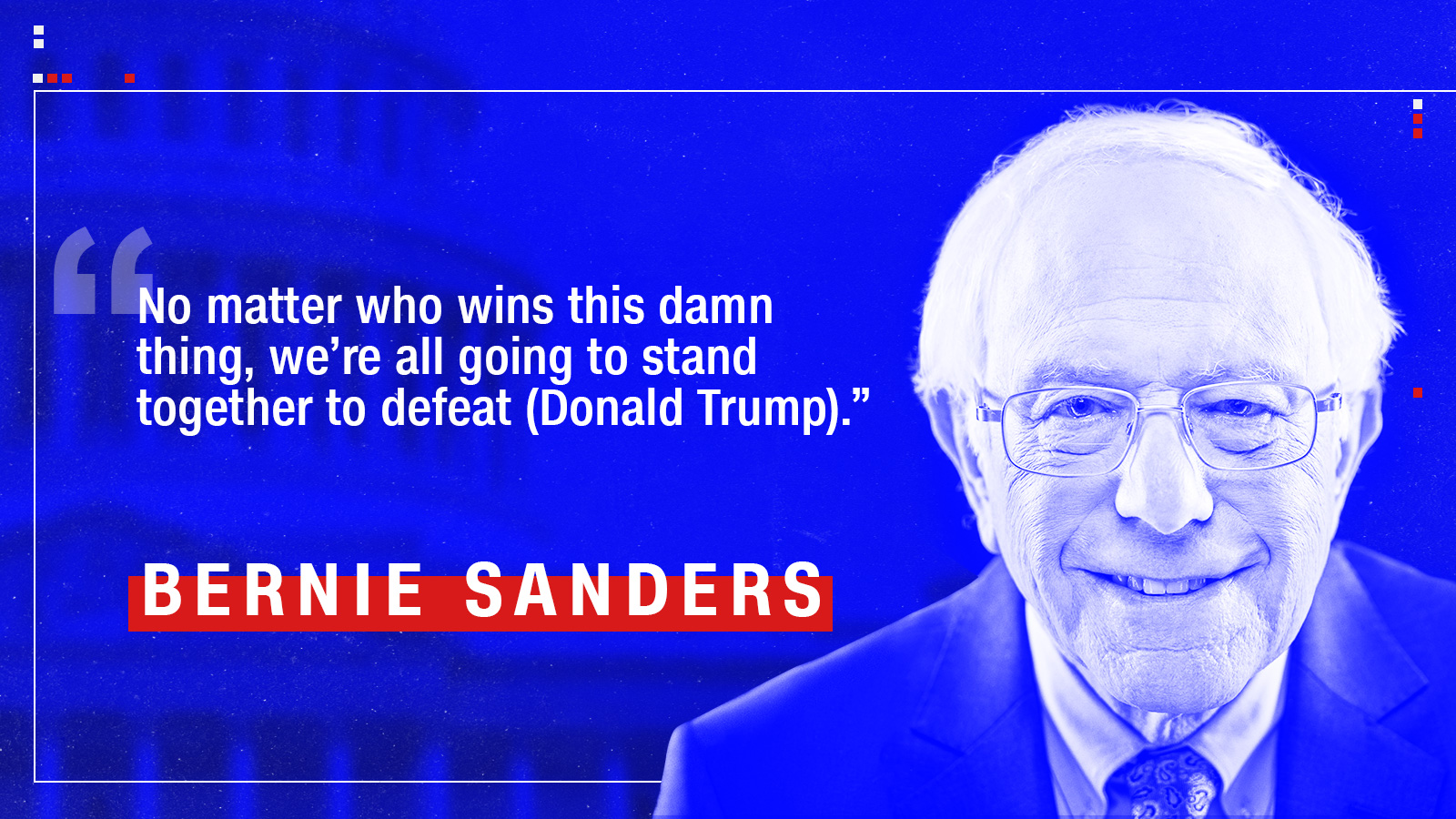 Minnesota Sen. Amy Klobuchar raised her hand tonight when the candidates were asked if they were concerned about "having a Democratic socialist on the top of the ticket."

Sen. Bernie Sanders quickly responded to the question, saying, "I am not."

Klobuchar laughed and went on to explain that she and Sanders work together all the time.

"But I think we are not going to be able to out-divide the divider-in-chief," she said. "I think we need someone to head up this ticket that actually brings people with her, instead of shutting them out." 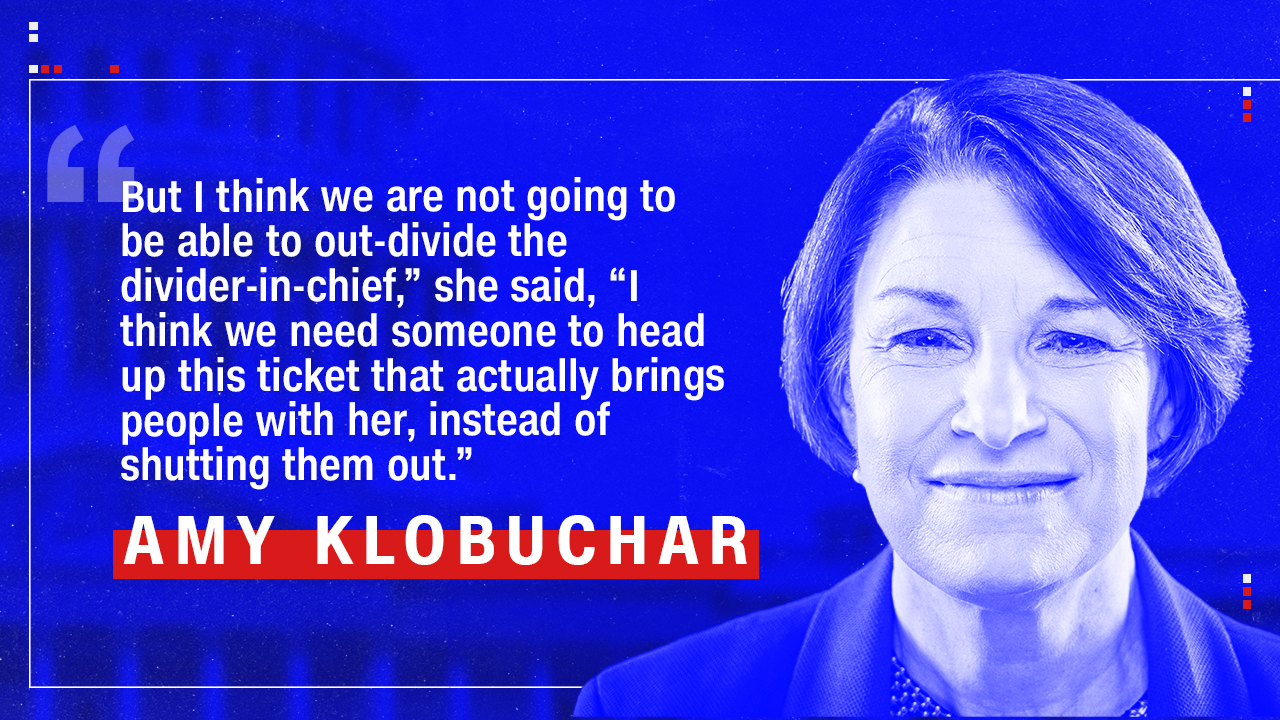