Facts First: Yang is correct that some 4 million manufacturing jobs have been lost in the United States since the turn of the century, but it is unclear how many of them were lost due to automation.

America lost 4.4 million manufacturing jobs between January 2000 and January 2020, according to the Bureau of Labor Statistics. The sharpest declines during the time period happened during the 2001 recession.

Economists, including at the National Bureau of Economic Research, attribute the job losses in part to increased trade liberalization and technological advances including automation.

Sens. Elizabeth Warren and Amy Klobuchar were united in their support for American women to have power over their own bodies tonight on the debate stage in New Hampshire.

Both women addressed the laws being passed in states around the country that have rolled back the protections of Roe v. Wade, the 1973 US Supreme Court decision which affirmed the legality of a woman's right to have an abortion under the Fourteenth Amendment to the Constitution.

"If we are going to protect the people of the United States of America and protect our rights to have dominion over our own bodies, then it's going to mean we can't simply rely on the courts," Warren said. "It is time to have a national law to protect the right of a woman's choice."

"I would only appoint judges that would respect precedent and one of those key precedents is Roe v. Wade," Klobuchar said.

Elizabeth Warren, with one-word on Friday, shot down Pete Buttigieg’s defense of his record on race issues as South Bend, Indiana mayor.

Buttigieg's record in South Bend -- especially his handling of issues like policing and economic inequality in predominately black neighborhoods of the Indiana city -- has been a central to criticism of his campaign.

After Buttigieg answered a question from the debate moderators about his record of handling marijuana possession arrests in South Bend, Warren was asked if his answer was sufficient.

During the debate, businessman Andrew Yang claimed that “mental illness, stress, debt, substance abuse, overdoses” were all at record highs.

Yang made similar claims during debates in July and December as well. Here’s what we found:

Facts First: While it's true that these rates have risen recently, it's impossible to say they're at record levels.

It’s unclear what debt Yang is referring to here, but it’s true that student loan debt, which has climbed to $1.5 trillion, has reached record levels, as has the US national debt, which is currently over $23 trillion.

Drug overdose deaths increased significantly between 1999 and 2017, but provisional data posted by the CDC last year  suggest that rate fell slightly in 2018 – down to an estimated 68,000 deaths from about 70,000 the year before.

Stress and mental illness are far more difficult to quantify given how recently humans have been recording these health issues.

Billionaire businessman Tom Steyer pointed out that race had not come up at all in the first 90 minutes of Friday night’s Democratic debate.

“We have not said one word tonight about race. Not one word. Are you kidding me?” he said.

Steyer said that African-Americans, Latinos and Asian-American and Pacific Islanders are “the heart and soul of this party.”

His comments came as Steyer focuses on South Carolina, where polls show him having risen into the double digits. After his answer, the debate shifted toward criminal justice and issues of race. 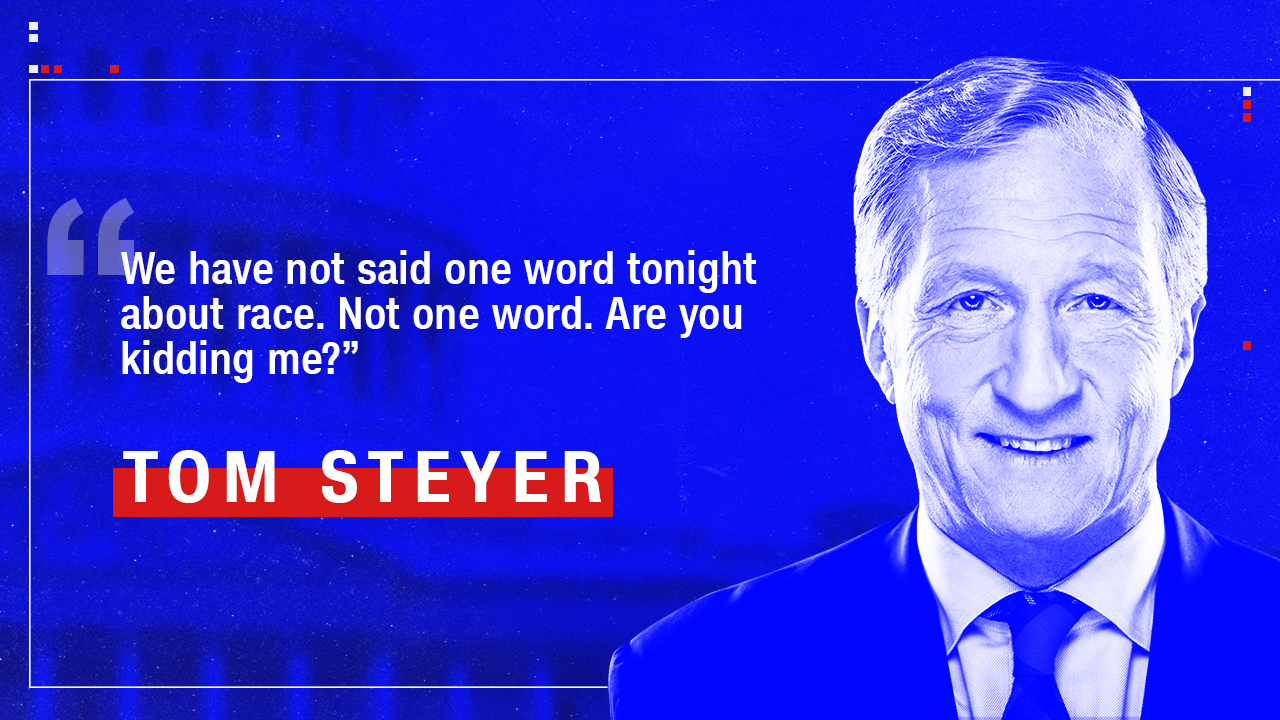 Bernie Sanders conceded on Friday night that he had not been fully consistent over the course of his career when it came to gun control laws.

Sanders voted against the Brady Bill, which targeted handguns, five times before it passed — a point that Joe Biden recalled, along with Sanders' support for legislation that made it nearly impossible to pursue civil liability claims against gun manufacturers.

In explaining his changed views, Sanders touted his D- rating from the NRA, before talking about the state he represents.

"To answer your question, I come from — like New Hampshire — from a very very rural state. In Vermont, until the last two years ago, they had virtually no gun control at all," Sanders said. "And I represented that perspective."

But, Sanders added, "The world has changed and my views have changed."

Biden followed up, noting the human coast of inaction by the government -- and, he implied, Sanders.

"Think of all the thousands and thousands of people" who were killed by gun violence, Biden said to Sanders, "while you were representing your constituency."