He used the senators as examples of colleagues he could work with during an era where "at least there was some civility" in the Senate.

Here's what Harris had to say about Biden's remarks:

"I do not believe you are a racist and I agree with you when you commit yourself to the importance of finding common ground, but I also believe, and it's personal, and it was hurtful to hear you talk about the reputations of two United States senators who (have) built their reputations and career on the segregation of race in this country."

She went on to talk about her experience as young girl.

"It was not only that, but you also worked with them to oppose there was a little girl in California who was part of the second class to integrate her public schools and she was bussed to school every day. That little girl was me. So I will tell you that on this subject, it cannot be an intellectual debate among Democrats. We have to take it seriously. We have to act swiftly," Harris said.

Harris raised the issue while talking about race and recalling her own childhood.

"There is not a black man I know, be he a relative, a friend or a coworker who has not been the subject of profiling or discrimination. My sister and I had to deal with the neighbor who told us her parents couldn't play with us because we were black," she said.

Mayor Pete Buttigieg admitted that his police force in South Bend lacked diversity because he “couldn’t get it done.”

South Bend, Indiana, has been in turmoil over the last two weeks after a white officer shot a black man during an altercation earlier this month. The police have alleged that the black man was breaking into cars and wielding a knife.

Buttigieg said the situation around the shooting is a “mess” because the officer didn’t have his body camera on.

“We are hurting. I could walk you through all of the things we have done as a community,” Buttigieg said. “All of the steps we took from bias training to de-escalation, but it didn’t save the life of Eric Logan. When I look into his mother’s eyes, I have to face the fact that nothing that I say will bring him back.”

He added: “This is an issue that is facing our community and so many communities around the country. Until we move policing out from the shadow of systemic racism and whatever this reaches us, there is a wall of mistrust put up one racist act at a time not from what happened in the past, but what happened in the present. It threatens the wellbeing of every community. I am determined to bring about a day when a white person driving a vehicle in and a black person driving a vehicle, when they see a police officer approaching, feels the same thing. Not of fear, but of safety. I am going to bring about that very thing.” 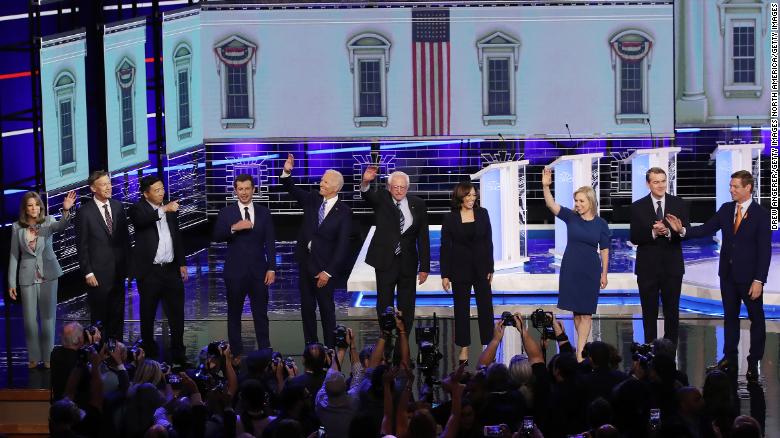 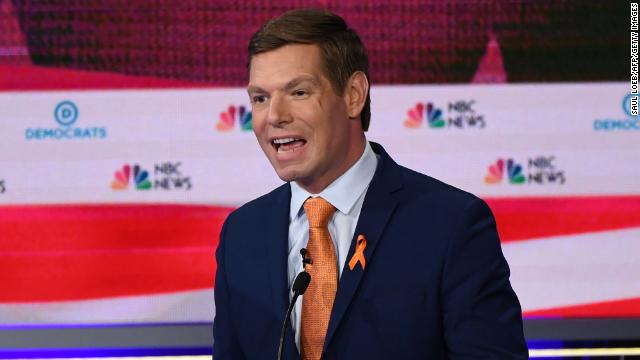 California Rep. Eric Swalwell is sporting an orange ribbon on his lapel to honor victims of the Parkland, Florida shooting.

The ribbons were made by the father of Jaime Guttenberg, a student who was killed in the mass shooting of Marjory Stoneman Douglas High School in February 2018. Swalwell wore the same orange ribbon at his kickoff campaign rally in California. 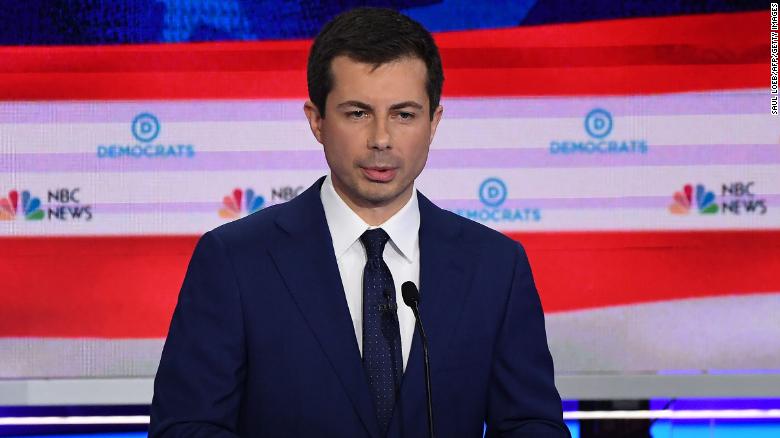 South Bend Mayor Pete Buttigieg lambasted Republicans touting their close ties to Christian leaders at the same time that they are separating families at the border and putting children into detention centers.

“Now, our party doesn’t talk about that as much largely for a good reason which was, we are committed to the separation of church and state and stand for people for any religion and people of no religion,” Buttigieg said. “But we should call out hypocrisy."

He added: “And for a party that associates with Christianity to say it is OK to suggest that God would smile on the division of families at the hands of federal agents, that God would condone putting children in cages, has lost all claim to ever use religion language again.”

Buttigieg, an Episcopalian, often talks about the benefits of faith on the campaign trail and his rise to prominence was based, in part, in his ability to talk about faith with Democrats and use it to slam Republicans.

“Frankly, it couldn’t be more radically different than what I see certainly in this White House, where there is a lot of chest-thumping and self-aggrandizing, not to mention abusive behavior, but also political agenda that seems to always be revolving around that idea that somehow it’s too easy for poor people in this country,” Buttigieg said in April. “It’s just so different from what I get when I read Scripture.”

“I get that one of the things about Scripture is different people see different things in it,” he added. “But, at the very least we should be able to establish that God does not have a political party.” 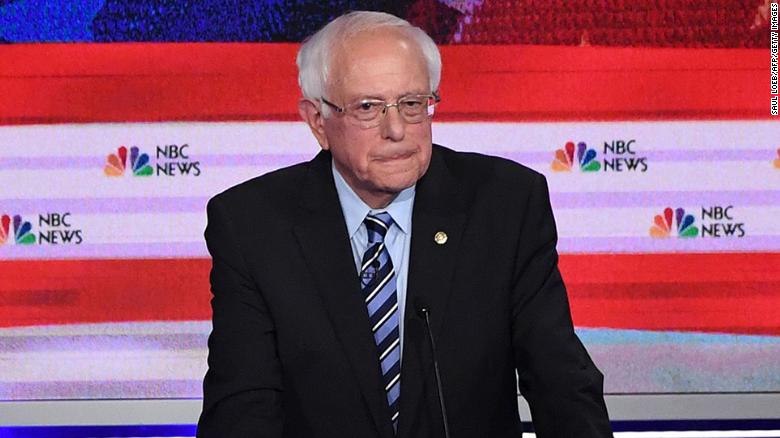 Senator Bernie Sanders blasted the rich for taking advantage of America in Thursday night’s debate, saying that three people own more wealth than the bottom half of the nation.

Facts First: It’s true that the three richest Americans have more wealth than the bottom half of the nation, according to a 2017 study by the left-leaning Institute for Policy Studies.

Bill Gates, Jeff Bezos, and Warren Buffett had more combined wealth ($248.5 billion) than the 160 million people on the lower rungs of the wealth ladder, according to the study.

The institute used data from the 2017 Forbes 400 list and the Federal Reserve’s 2016 Survey of Consumer Finances.

President Donald Trump says he briefly watched a portion of the Democratic debate underway in Miami, and wasn't impressed.

"I just passed a television set on the way here. I saw that healthcare and maximum healthcare was given to 100% of the illegal immigrants coming into our country by the Democrats. And unfortunately they didn’t discuss what they’re giving to American citizens," Trump said. "That’s not a good thing."

While health care for undocumented immigrants comprised a portion of the debate, the Democrats also spent time laying out their plans for providing more Americans health coverage.

He went on to address Merkel, explaining his view that last evening's debate was uninteresting.

"You know they have a debate going on," he said to his German counterpart. "There was the first debate last night. It wasn’t very exciting I can to tell you that. They have another one going on today. They definitely have plenty of candidates, but that’s about it. I look forward to spending time with you rather than watching that."

"Immediately on January 20 of 2021, we cannot forget our DACA recipients and I'm going to start there. I will immediately by executive action reinstate DACA status and DACA protection to those young I will further extend protection for deferral of deportation for their parents and for veterans who we have so many who are undocumented and have served our country and fought for our democracy," she said.

Harris also said she would put a plan into place to review asylum cases, as well as release children from detention centers.

"A mother who pays a coyote to transport her child through the entire country of Mexico facing unknown peril to come here, why would that mother do that? I will tell you. Because she has decided for that child to remain where they are is worse. But what does Donald Trump do? He says go back to where you came from. That is not reflective of our America and our values and it's got to end," she said.

Some background: Harris has previously vowed to use executive actions to remove the threat of deportation of millions of undocumented people in the United States.

What's in her plan: The plan would work within the current confines of immigration law and assumes Congress would be unable to pass immigration reform, something the body has failed to do for years. Her plan, should she be elected in 2020, would instead expand the use of deferred action immigration programs and use executive actions. 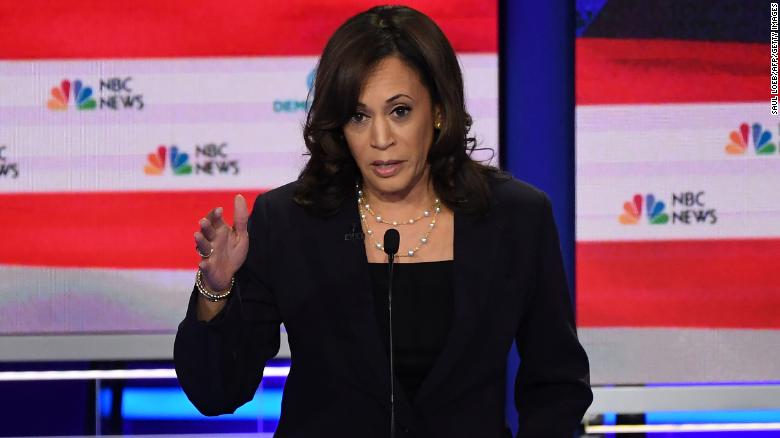 Ahead of the Democratic debate, Harris advisers said their plan was twofold:

The discipline of this career prosecutor is showing off. She’s prepared for weeks for this debate in Washington and then arrived early in Miami to drill through last-minute debate prep. She also has shown on the campaign trail a deft ability to use canned phrases and make them sound as if she’s saying it for the first time.

Enter: “OK guys, Americans don’t want a food fight. They want to know how we’ll get food on their table.”

What we’re seeing here is the notorious preparation of the studious prosecutor.