New York Sen. Kirsten Gillibrand said, as a white woman of privilege, she thinks she can lift voices that aren't being heard and explain white privilege to women in the suburbs.

"I don't believe it's the responsibility of Cory and Kamala to take this on these issues of institutional racism and system racism in our country," she said. "I think as a white woman of privilege who is a US senator running for president of the united States, it is my responsibility to lift up those voices that aren't being listened to. And I can talk to those white women in the suburbs and explain to them what white privilege actually is."

She went on to describe this scenario:

"That when their son is walking down the street with a bag of M&Ms in his pocket wearing a hoodie, his whiteness protects him from not being shot. When his -- when her -- when their child has a car that breaks down and he knocks on someone's door for help and the door opens and the help is given, it's his whiteness that protects him from being shot. That's what white privilege in America is today. And so my responsibility is to not only lift up those stories but explain to communities across America, like I did in Youngstown, Ohio, to a young mother, that this is all of our responsibilities. And together we can make our community stronger."

Kirsten Gillibrand cracked a joke about President Donald Trump before explaining her positions on the climate crisis.

"So, the first thing that I'm going to do when I'm president is I'm going to Clorox the Oval Office," she said. The audience laughed and applauded.

She continued on a more serious note: "The second thing I'm going to do is I will reengage on global climate change, and I will not only sign the Paris Global Climate Accords, but I will lead a worldwide conversation about the urgency of this crisis."

Remember: This is not the first time Gillibrand has make this joke.

Sen. Michael Bennet said that all Democrats voted to back a pathway to citizenship for 11 million people and spending $46 billion on border security.

Facts first: This is true. All Senate Democrats and 14 Republicans voted for the Senate immigration bill that passed in 2013.

Bennet was one of eight senators — four Republicans and four Democrats — who became the bipartisan group known as the “gang of eight” that hammered out an immigration compromise bill in 2013. The legislation, which included a pathway to citizenship, passed the Senate, 68-32, and Bennet is correct that all 54 Senate Democrats voted for it, along with 14 Republicans. A majority of Republicans, 32, opposed the bill.

While the bill passed the Senate, then-House Speaker John Boehner did not take it up in the Republican controlled House, and the legislation died at the end of 2014. It’s not clear whether Bennet and the other senators in the 2020 presidential race could strike a similar compromise or another major immigration bill in today’s Senate.

We're an hour and a half into the debate, and so far former Vice President Joe Biden has had the most speaking time, with just more than 13 minutes.

Sen. Kamala Harris has had almost 12 minutes so far.

Here's a look at where all the candidates stand: 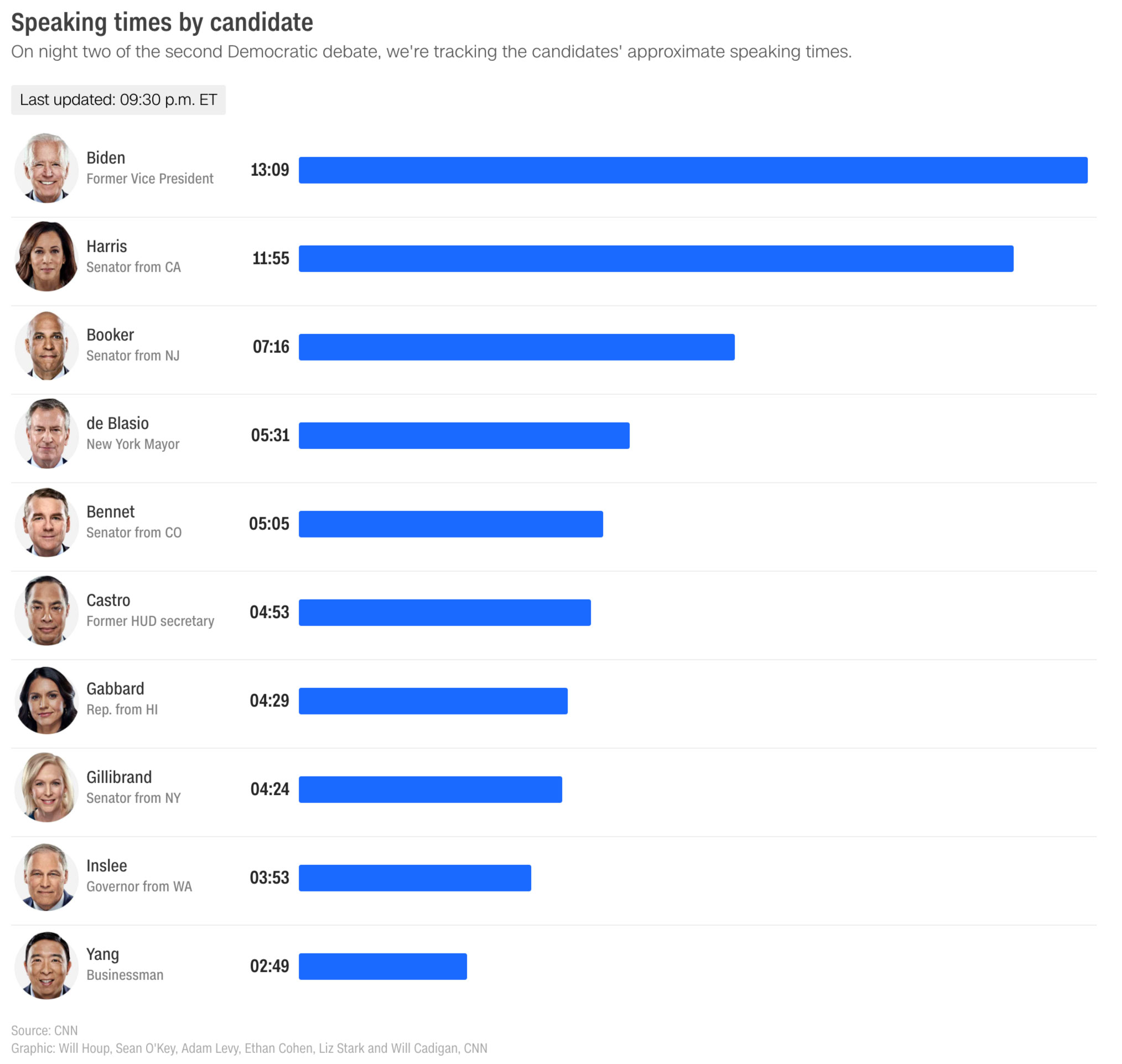 The exchange between the two presidential hopefuls got heated after Biden was asked to respond to Booker's criticism of his plan as "an inadequate solution to what is a raging crisis in our country."

"I think he is wrong. I think we should work together. He has a similar plan," Biden said.

"My response is that this is a crisis in our country because we have treated issues of race and poverty, mental and addiction by locking people up and not lifting them up. And Mr. Vice President has said that since the 1970s, every major crime bill, every crime bill, major and minor, has had his name on it. And sir, those are your words, not mine. And this is one of those instances where the house was set on fire and you claimed responsibility for those laws. And you can't just now come out with a plan to put out that fire. We have got to have far more bold action on criminal justice reform," Booker said.

Biden jumped back and tried to defend his record by attacking Booker's record as mayor:

"The bills that the president -- excuse me, the future president, that the senator is talking about, are bills that were passed years ago and passed overwhelming. Since 2007, I, for example, tried to get the crack powder cocaine totally disparity, totally eliminated. In 2007, you became mayor and you had a police department that you went out and hired Rudy Giuliani's guy and you engaged in stop and frisk. You had 75% of those stops reviewed as illegal."

But Booker shot back at Biden.

"We have a system right now that's broken. And if you want to compare records and I'm shocked that you do, I am happy to do that. Because all the problems that he is talking about that he created, I actually led the bill that got passed into law that reverses the damages that your bills that you were ... bragging calling it the Biden crime bill up until 2015," he said.

Sen. Kamala Harris has been a vocal critic of former Vice President Joe Biden's position on busing in the 1970s — but Biden says the two actually share the same opinions on the issue.

They're currently debating the issue.

Some background on what busing means: The 1954 US Supreme Court ruling in Brown v. Board of Education brought an end to legal racial segregation in schools. But because of demographic trends, white flight to the suburbs and discriminatory housing practices like redlining, many neighborhoods across the country remained segregated. Combined with how cities drew school district lines, that meant schools remained segregated, too.

It became one of the most controversial topics in US politics. Supporters of busing argued that the practice was necessary to effectively integrate schools — and help correct the damaging legacy of school segregation.

But opponents of busing, many of whom were also opponents of school desegregation, argued that children were being transported to unsafe neighborhoods, and they objected to the long commutes children experienced. Others, including then-Sen. Biden, said that busing forced schools to fulfill racial quotas and did not achieve equal opportunity for students.

Andrew Yang said: "Raise your hand in the crowd if you’ve seen stores closing where you live. It is not just you. Amazon is closing 30% of America's stores and malls.”

Facts first: Yang is right that up to 30% of malls may close in the next few years, but that's not all because of Amazon.

Malls have been closing fast, and will continue to do so, according to Wall Street retail analysts. A report from Credit Suisse in 2017 projected that between 20% and 25% of malls would close within five years. Cowen & Company estimated that 20% of stores in large mall chains will close, and that all class C and D malls — which comprise about 30% of the total — are at dire risk.

E-commerce has played a role in the shrinkage of brick and mortar stores, rising from less than 1% of all retail in 1999 to 10.2% now, according to the Census Bureau. Amazon comprises nearly half of online retail in the United States, according to EMarketer.

But retail has also been challenged by overcapacity, given a years-long retail boom that saw real estate developers building more malls than consumers really wanted. That bubble is now bursting, as consumer preferences have shifted away from enclosed malls. Also, many large chains — from Payless Shoes to Toys ”R” Us — have slipped into bankruptcy after being acquired by private equity firms that loaded them up with debt.