While criticizing former Vice President Joe Biden’s health care plan, California Sen. Kamala Harris said, “Let's talk about the fact that the pharmaceutical companies and the insurance companies last year alone profited $72 billion, and that is on the backs of American families.”

Facts First: Harris was in fact understating the profits of these industries. Ten of the largest US-based drug companies alone made $69 billion in profits last year. Health insurance companies made $23 billion.

Not all of these profits came from the companies’ operations in the United States.

A report from the National Association of Insurance Commissioners said the health insurance industry generated net earnings of $23.4 billion in 2018.

Asked if he would commit to ending the use of fossil fuels and fracking during his presidency, Joe Biden hesitated before saying he would “work it out” of the American economy.

"We would make sure it's eliminated and no more subsidies for either one of those," the former vice president said of coal. "Any fossil fuel."

Washington Gov. Jay Inslee, who began his run as a one-issue candidate focused on climate change, challenged Biden, saying he didn’t seem to understand the urgency.

“We cannot work this out. The time is up,” Inslee said. “Our house is on fire. We have to stop using coal in ten years and we need a president to do it or it won't get done. Get off coal. Save this country and the planet."

Inslee, who has released a comprehensive plan backed by leading climate activists, told Biden that his “argument isn’t with me, it’s with science” and claimed the former vice president’s plan took a “middle ground” approach.

Biden denied it, then talked about his plan to rejoin the Paris climate pact and push for the alliance to adapt more aggressive goals.

Sen. Kirsten Gillibrand made a similar promise, but with some extra mustard.

"The first thing that I'm going to do when I'm president is I'm going to Clorox the Oval Office,” she said. “The second thing I'm going to do is I will reengage on global climate change and I will not only sign the Paris Global Climate Accords, but I will lead a worldwide conversation about the urgency of this crisis.”

Still, such promises were criticized.

“Nobody should get applause for rejoining the Paris climate accord,” Sen. Cory Booker said. “That is kindergarten.”

Businessman Andrew Yang offered an even more dire portrait of what’s to come – without or without immediate, urgent action.

“We are too late. We are ten years too late,” Yang said. The entire world needs to take action to reverse the damage, he added, but “we also need to start moving people to higher ground.”

After talking for two hours, it looks like former Vice President Joe Biden has had the most to say. He lead the way with 15:38 minutes, followed by California Sen. Kamala Harris with 13.25 minutes. 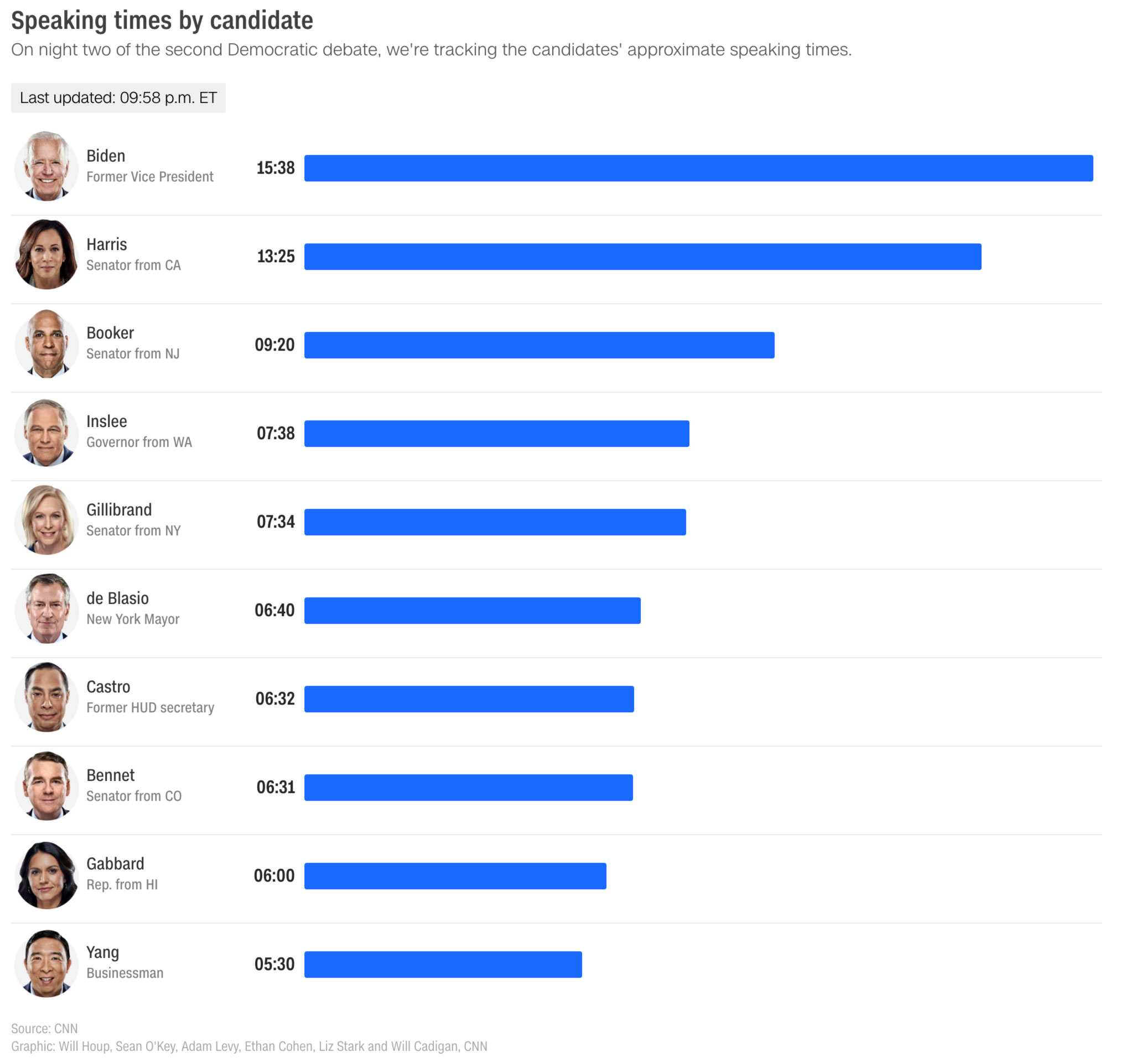 Several candidates criticized the Trump administration’s policy of separating migrant children from their parents at the border, citing a long-standing US law that can result in such action.

Facts First: This is true -- and the law has been a flashpoint in the immigration debate.

Last year, the Trump administration implemented its controversial "zero tolerance" policy, using a section of US law to criminally prosecute all adults who illegally crossed the southern border. The policy led to the separation of thousands of families, given that children can't be held in federal jail with adults. The policy—and the section of the code at the center of it—have become a flashpoint in the immigration debate.

Democratic candidates remain divided over the law, referred to as Section 1325, with some wanting to instead make crossing the border illegally a civil offense, instead of a criminal offense.

Former HUD Secretary Julian Castro shot the issue into the national dialogue at the last round of debates and hammered in on his position Wednesday night.

“The only way that we're going to guarantee that we don't have family separations in this country again is to repeal section 1325 of the immigration nationality act,” Castro said Wednesday. “That is the law that this President, this administration is using to incarcerate migrant parents and then physically separate them from their children.”

Former Vice President Joe Biden added: "The fact of the matter is, when people cross the border illegally, it is illegal to do it unless they're seeking asylum. People should have to get in line. That's the problem. And the only reason this particular part of the law is being abused is because of Donald Trump. We should defeat Donald Trump and end this practice."

In explaining the urgency of the climate crisis, Sen. Kirsten Gillibrand said one of the first things she'd do as president would be to sign the Paris climate accord.

What’s in the deal? The Paris climate accord is a 2015 agreement among more than 200 nations to combat climate change.

Participants committed to keep global warming well below two degrees Celsius above pre-industrial levels and, if possible, below 1.5 degrees.

The US signed — then withdrew — from it: The United States ratified the agreement, but President Donald Trump announced in June 2017 that the US would withdraw from it — although it cannot formally leave until November 2020.

Each country is responsible for developing their own plans for achieving those goals.

New York Sen. Kirsten Gillibrand said, as a white woman of privilege, she thinks she can lift voices that aren't being heard and explain white privilege to women in the suburbs.

"I don't believe it's the responsibility of Cory and Kamala to take this on these issues of institutional racism and system racism in our country," she said. "I think as a white woman of privilege who is a US senator running for president of the united States, it is my responsibility to lift up those voices that aren't being listened to. And I can talk to those white women in the suburbs and explain to them what white privilege actually is."

She went on to describe this scenario:

"That when their son is walking down the street with a bag of M&Ms in his pocket wearing a hoodie, his whiteness protects him from not being shot. When his -- when her -- when their child has a car that breaks down and he knocks on someone's door for help and the door opens and the help is given, it's his whiteness that protects him from being shot. That's what white privilege in America is today. And so my responsibility is to not only lift up those stories but explain to communities across America, like I did in Youngstown, Ohio, to a young mother, that this is all of our responsibilities. And together we can make our community stronger."

Kirsten Gillibrand cracked a joke about President Donald Trump before explaining her positions on the climate crisis.

"So, the first thing that I'm going to do when I'm president is I'm going to Clorox the Oval Office," she said. The audience laughed and applauded.

She continued on a more serious note: "The second thing I'm going to do is I will reengage on global climate change, and I will not only sign the Paris Global Climate Accords, but I will lead a worldwide conversation about the urgency of this crisis."

Remember: This is not the first time Gillibrand has make this joke.