Ten Democratic presidential candidates took the stage tonight in Atlanta for the fifth debate in the 2020 election.

After more than two hours spent discussing topics like the impeachment inquiry and climate change, Sen. Elizabeth Warren and Mayor Pete Buttigieg spoke the most at tonight's debate.

Watch a minute-by-minute breakdown of where each candidate ranked:

In response to a question about child care costs tonight, businessman Andrew Yang said, “There are only two countries in the world that don’t have paid family leave for new moms: the United States of America and Papua New Guinea.”

Facts First: It’s true that America ranks behind all other major developed nations when it comes to statutory paid family leave. But Yang’s claim that only the US and Papua New Guinea offer no paid family leave appears to be based on a report that is more than five years old.

The United States is the only member of the Organisation for Economic Co-Operation and Development that doesn’t offer statutory paid family leave, according to a report from August 2019.

A May 2014 report by the International Labor Organization showed that out of 185 countries and territories that share information on parental leave, only Papua New Guinea and the United States “have no general legal provision for cash benefits.”

The Yang campaign did not immediately respond to a request for comment on its sources.

Facts First: Harris’ characterization is misleading. Gabbard did appear on Fox News during the Obama administration, and often criticized the administration’s Middle East policy. But she has appeared much more frequently on Fox News since President Trump took office.

Gabbard appeared on Fox News at least 15 times between January 2013, when she first took office, and January 2017 when Obama left office. She often criticized the Obama administration but primarily in the context of Middle East policy.

By comparison, Gabbard has appeared on Fox News far more frequently during the Trump administration, and since she announced her presidential campaign – appearing at least 15 times in 2019 alone.

The fifth Democratic presidential debate has just wrapped up with each candidate making their closing case to be the party's nominee.

Here are some of the key lines from their closing statements:

The final count is in, and Sen. Elizabeth Warren led the group with more than 13 minutes in speaking time. Mayor Pete Buttigieg, who had more than 12 minutes, came in second. 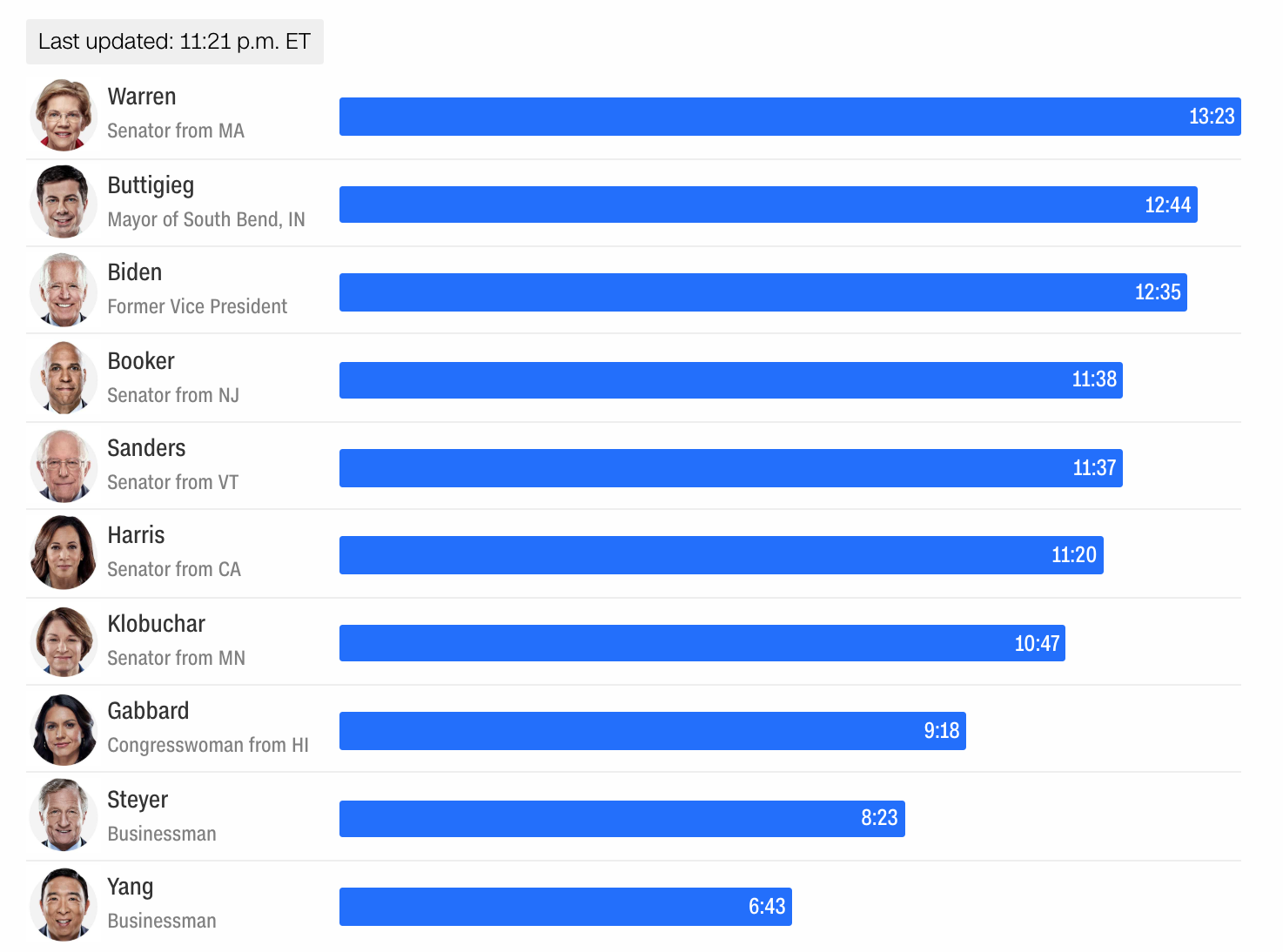 Pete Buttigieg defend his level of experience on Wednesday in contentious exchanges with Minnesota Sen. Amy Klobuchar and Hawaii Rep. Tulsi Gabbard, using the debate to argue “Washington experience is not the only experience that matters.”

The most contentious point of Buttigieg’s defense came when the mayor said, “There’s more than 100 years of Washington experience on this stage, and where are we right now as a country.”

Buttigieg’s experience – he leads a city of just over 100,000 people, has only ever been elected by a few voters thousand and lost his only statewide election – has been a central question about his candidacy. And it was clear on Wednesday that his competitors came into the debate looking to questions his qualifications.

When Buttigieg mentioned voting rights, Klobuchar jumped in and said the issue is a “good example of where (Buttigieg) has said the right words” but not followed it up with action and called the mayor a “local official.”

“I have actually done this work,” Klobuchar said.

“Washington experience is not the only experience that matters,” he said, nodding not only his time as mayor, but his experience as a war veteran.

“I would submit that this is the kind of experience we need, not just to go to Washington, but to change it before it is too late,” Buttigieg said.

Then Gabbard jumped and said Buttigieg showed a lack of judgment when he suggested using the U.S. military to help combat cartel violence along the border for security cooperation.

“That is outlandish, even by the standards of today’s politics, Buttigieg responded. “Do you seriously think anybody on this stage is proposing invading Mexico? … I’m talking about building alliances.”

The mayor then hit Gabbard for meeting with Syrian President Bashar al-Assad.

“Let’s also talk about judgment. One of the foreign leaders you mentioned meeting was Bashar al-Assad,” Buttigieg said.

Biden appeared to be referring to former Illinois Sen. Carol Moseley Braun, the first black woman elected to the Senate -- though not the only one. Moseley Braun is a strong Biden supporter.

"I said the first," Biden said as Harris reacted.

South Bend, Indiana, Mayor Pete Buttigieg acknowledged the most existential threat to his candidacy at Wednesday’s debate – his lack of African American support – and accepted implicit criticism by California Sen. Kamala Harris by saying he agrees with her views on the importance of black voters.

Buttigieg’s lack of black support, especially in South Carolina, has been a critical issue for the mayor of South Bend and something he has been trying to address for months. But his work has done little and a recent poll in the southern state – where the Democratic primary electorate is expected to be heavily African American – found he has 0% support.

Harris, in response to question about past comments she made about Buttigieg’s support, said that her answer came in response to the Buttigieg campaign using a stock photo that was taken in Kenya as an image related to his plan aimed at racial equality on a host of issues. The Buttigieg campaign apologized for using the photo, but said they were not aware the photo was taken in Kenya when it was used.

Harris didn’t focus on the photo issue very long – “I believe the mayor has made apologies for that,” she said – and instead turned to the importance of black voters in an implicit criticism of the mayor.

“The larger issue is that for too long candidates have taken for granted constituencies that have been the backbone of the Democratic Party and has overlooked those constituencies,” she said.

When the conversation turned to Buttigieg, the mayor said, “I completely agree.”

“And I welcome the challenge of connecting with black voters in America who don’t yet know me,” Buttigieg said. “And before I share what’s in my plans, let me talk about what’s in my heart and why this is so important.”

Buttigieg went on to talk about his time as mayor of South Bend, a city that is over a quarter black, and his faith.

“I care about this because my faith teaches me that salvation has to do with how I make myself useful to those who have been excluded, marginalized, and cast aside and oppressed in society," he said.

But he closed out the answer by talking about his sexuality:

“While I do not have the experience of ever having been discriminated against because of the color of my skin, I do have the experience of sometimes feeling like a stranger in my own country, turning on the news and seeing my own rights come up for debate, and seeing my rights expanded by a coalition of people like me and people not at all like me,” he said. “Making it possible for me to be standing here, wearing this wedding ring in a way that couldn’t have happened two elections ago, lets me know just how deep my obligation is to help those whose rights are on the line every day, even if they are nothing like me in their experience.”