Amy Klobuchar said she raised $17,000 for her first campaign for US Senate in 2006 from ex-boyfriends.

"My first Senate race I literally called everyone I knew and I raised $17,000 from ex-boyfriends," she said. "I'd like to point out it is not an expanding base."

Klobuchar came as she was talking about gerrymandering and needing to do something to fix the system to make sure "we don't have money in politics from the outside."

During her opening remarks tonight, California Sen. Kamala Harris addressed the impeachment inquiry into President Trump, which reached a crescendo today with the bombshell testimony from EU Ambassador Gordon Sondland.

"First of all, we have a criminal living in the White House. And there is no question that in 2020 the biggest issue before us until we get to that tender moment is justice on the ballot. And what we saw today, Ambassador Sondland by his own words told us, that everyone was in the loop. That means, it is a criminal enterprise engaged in by the President, from what we heard today, the Vice President, the Secretary of State and chief of staff," Harris said.

Earlier today: EU Ambassador Gordon Sondland confirmed for all to see that there was a quid pro quo with Ukraine, that Trump withheld a White House meeting until Ukraine launched investigations into the Bidens.

"I know that members of this committee frequently frame these complicated issues in the form of a simple question: Was there a quid pro quo?" Sondland said. "As I testified previously, with regard to the requested White House call and the White House meeting, the answer is yes."

An abridged version of the health care debate that’s played out in every Democratic presidential debate so far took place again early in Wednesday night’s showdown -- with candidates sticking with their now-familiar stances.

Massachusetts Sen. Elizabeth Warren touted the benefits of "Medicare for All." When moderators turned to Vermont Sen. Bernie Sanders, he said, “Thank you, I wrote the damn bill!”

South Bend, Indiana, Mayor Pete Buttigieg touted “Medicare for all who want it” -- his more moderate proposal -- as “something that as a governing strategy we can unify the American people around.”

South Bend, Indiana, Mayor Pete Buttigieg invoked recent comments from former President Barack Obama tonight, arguing that he can unite the country when Obama couldn’t because of new consensus around a host of issues including even once controversial topics like immigration and guns.

“As President Obama commented recently, we are not in a different reality than we were even 12 years ago,” Buttigieg said. “There is an American majority that stands ready to tackle big issues that didn’t exist in the same way even a few years ago.”

After mentioning immigration and guns – two issues he said Democrats were once on the defense about – Buttigieg added, “We have a majority to do the right thing if we can galvanize, not polarize, that majority.”

Obama, at a high-dollar donor confab earlier this month, urged the field of Democratic presidential hopefuls to “pay some attention to where voters actually are,” warning them about going so far on certain policies that they become out of step with voters.

“My one cautionary note is I think it is very important for all the candidates who are running at every level to pay some attention to where voters actually are,” Obama said, specifically saying he doesn’t think candidates should be “diluted into thinking that the resistance to certain approaches to things is simply because voters haven’t heard a bold enough proposal.”

Warren had been talking for a while about her plan for Medicare for All, a policy proposed by Sanders, when the moderator eventually asked Sanders for his response.

Implicitly referencing Trump’s ambassador to the European Union, Gordon Sondland -- who had contributed $1 million to Trump’s inaugural fund and testified in front of a House panel on Wednesday -- Warren offered a warning to campaign donors.

“Don’t ask to be an ambassador, because I’m not going to have that happen,” she said.

“We are not going to give away ambassador posts to the highest bidder,” Warren said.

In October, Warren released a proposal that included a pledge to cut off the donor-to-ambassador pipeline.

"My plan will make it the law by prohibiting campaign donations and political spending from being a consideration in the selection of an ambassador," she wrote.

Warren also said she would encourage Republican senators to vote to remove Trump from office, and said her argument to them would begin with encouraging GOP lawmakers to read Robert Mueller’s report.

Following a day filled with testimonies in the impeachment inquiry into President Trump, Sen. Bernie Sanders used his first speaking opportunity tonight at the Democratic debate in Atlanta to address the President.

"He is likely the most corrupt President in the modern history of America. But we cannot simply be consumed by Donald Trump. Because if we are, we are going to lose the election," Sanders said.

Sanders went on to mention issues like health care and climate change are more pressing concerns. 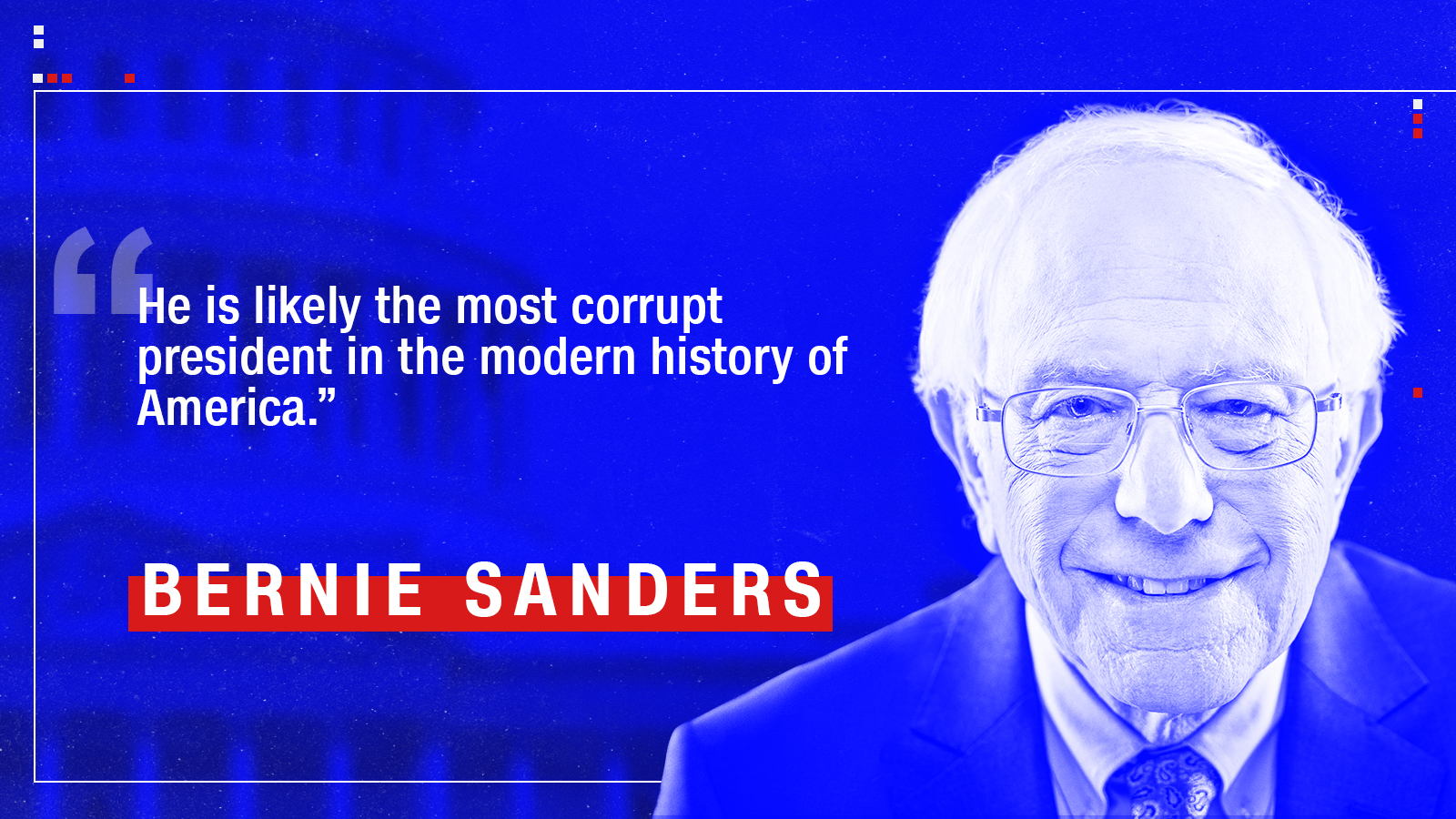 Tonight's debate opened with a question on impeachment.

Earlier today, three US officials testified publicly before the House Intelligence Committee as part of the impeachment inquiry into President Trump.

MSNBC's Rachel Maddow asked Democratic Sen. Elizabeth Warren if she will try to convince her Republicans colleagues to vote for impeachment. 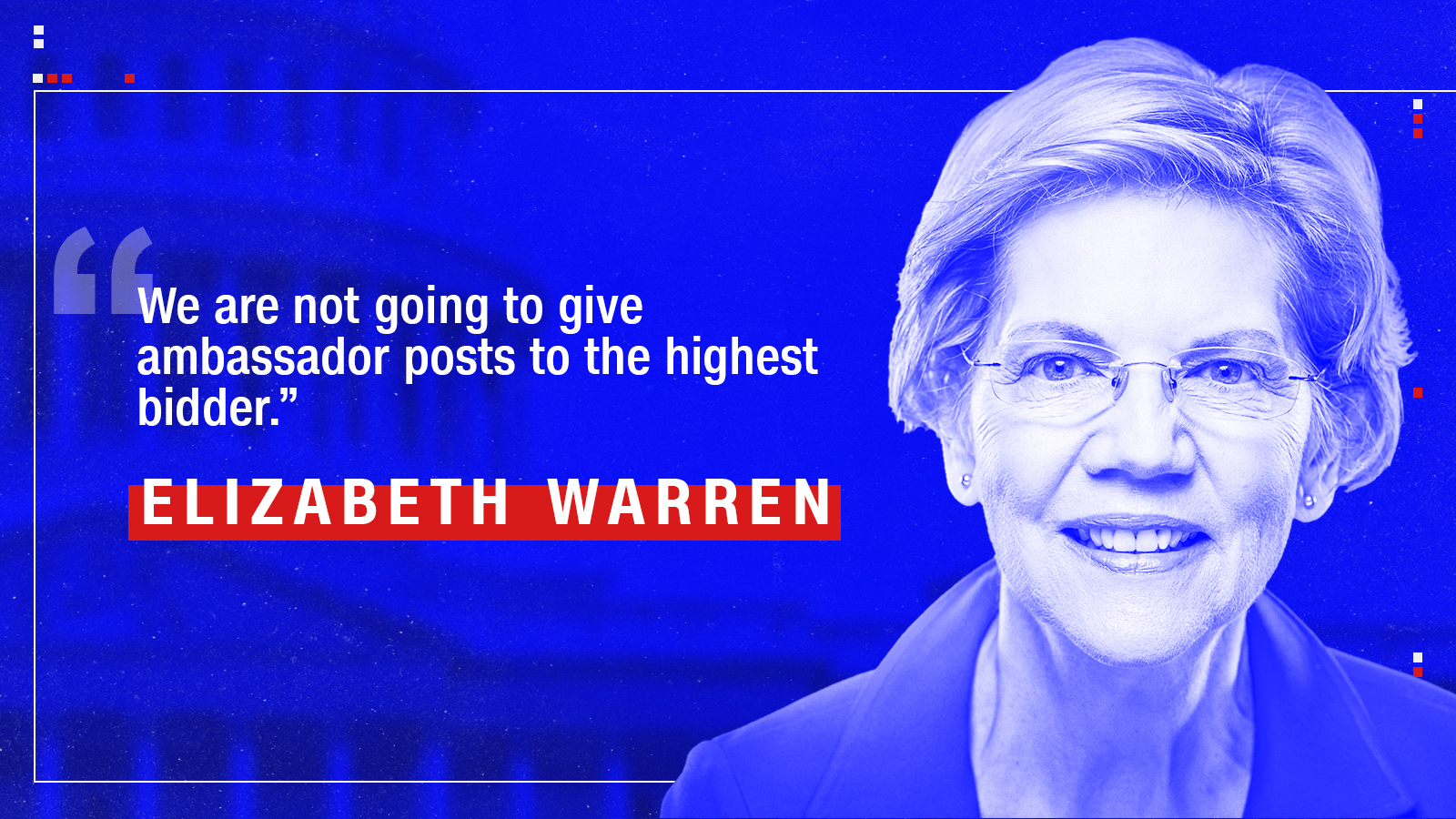 The debate, hosted by MSNBC and The Washington Post, takes place in the shadow of televised impeachment hearings in Washington. Hours before the debate's start time, officials, including the US ambassador to the European Union, publicly appeared before the House Intelligence Committee.