Taking aim at Trump: Comey kicked off his media tour on Sunday with an interview with ABC where he called the President "morally unfit" for the office.

April 25: James Comey will appear before a CNN town hall with Anderson Cooper.

CNN's Jake Tapper asked former FBI director James Comey about what the nation would be like if Hillary Clinton had won the election. Here's how that exchange went down:

Tapper: "Do you think the nation would be better off if Hillary Clinton had won?

Comey: "I can't answer that. That's something, that hypothetical is too hard for me to go back and time and try to answer"

Tapper: "You paint a pretty dire picture of President Trump. It's hard to imagine how you don't think the nation is better off had Hillary Clinton won."

Comey: "I don't think about it in those terms, Jake. I think we have the current president who was, in my view, legitimately elected, is serving as president. The question is: Is he adhering to our values? He's clearly not. So what do we do about it? I think the first thing we do is not get numb for it. When he calls for the jailing of private citizens in his tweets, don't shrug. But realize that is not okay, that's not normal."

Fired FBI Director James Comey said he doesn't feel like he was manipulative when he shared information from a memo to a friend, who then shared the contents with The New York Times last year.

Comey said the average citizen doesn't have a conversation with the President in which he's asked to drop an investigation into Michael Flynn, Trump's former national security adviser.

"I was in position to do something that would be useful and important and so I did it," he said. "And reasonable people can disagree about it, but I still think it was the right thing to do.

During an exchange with CNN's Jake Tapper, Comey was asked about why he said it was "possible" that Trump was compromised by Russians.

"What you asked me about now: Why did I say what I said whether I thought it was possible that the Russians had derogatory information on President Trump. I think it's unlikely, but possible."

Comey answered: "No. I think I have said that throughout. Here's why an honest answer has to be it's possible. Now, I'm not saying it's likely."

He called on Americans to scrutinize Trump's behavior.

"The first thing I think we should do is not get numb by it."

Former FBI Director James Comey said, despite everything they've been through, he doesn't hate President Trump.

"I definitely don't hate him," Comey said. "There are things he does that make me uncomfortable and I think are inappropriate in some ways like, bully-like behavior. But I don't hate Donald Trump. I don't even dislike Donald Trump."

The Justice Department is expected to make Comey's memos available to Congress later today, according to a source with knowledge of the matter.

"It's fine by me," Comey said when asked if that's the right decision.

"You don't care?" CNN's Jake Tapper asked as a follow up question.

"I don't care. I don't have views on it. I am totally fine with transparency."

Fired FBI Director James Comey told CNN's Jake Tapper he could be a witness for the prosecution in any potential case against former FBI Deputy Director Andrew McCabe.

"I could well be a witness," Comey told Tapper.

Earlier today, the Justice Department's inspector general referred its findings on McCabe to the US attorney's office in Washington for possible criminal charges associated with lying to internal investigators, according to a source familiar with the matter.

When exactly the referral was made to the US attorney's office was not immediately clear, and prosecutors there may decline to prosecute.

Last week, the IG issued a report finding that McCabe "lacked candor" on four occasions with internal investigators when discussing a Wall Street Journal article about the FBI's Clinton Foundation investigation, according to a copy of the report obtained by CNN.

In addition, the inspector general determined that McCabe was not authorized to disclose the existence of the investigation because it was not within the department's "public interest" exception for disclosing ongoing investigations. 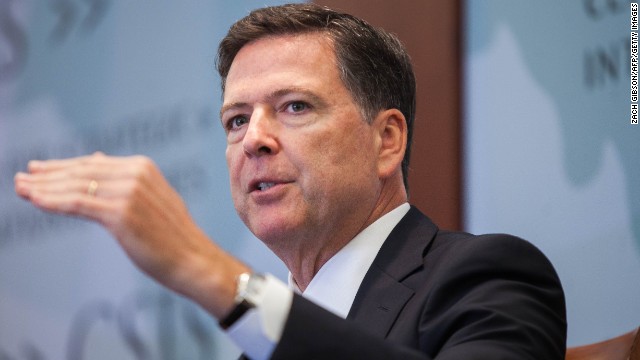 James Comey will return to CNN next week. The former FBI director is scheduled to appear before a CNN town hall with CNN's Anderson Cooper on April 25.

The one-hour town hall will be held at Phi Beta Kappa Memorial Hall at William & Mary in Virginia, which is Comey's alma mater. The event will be co-hosted by the Student Assembly at William & Mary.

President Donald Trump said Wednesday that former FBI Director James Comey was not fired because of the Russia investigation -- a statement directly at odds with the President's own comments on Comey's dismissal.

"Slippery James Comey, the worst FBI Director in history, was not fired because of the phony Russia investigation where, by the way, there was NO COLLUSION (except by the Dems)!" Trump tweeted.

However, Trump had told NBC News last year that he was thinking of "this Russia thing" when he decided to fire Comey.

When the President fired Comey last May, the White House initially cited a recommendation of Deputy Attorney General Rod Rosenstein, who sharply criticized Comey's handling of the investigation into Hillary Clinton's use of a private email server as secretary of state.

A few days later, after Comey's ouster, Trump told NBC News' Lester Holt in an interview, "regardless of (Rosenstein's) recommendation, I was going to fire Comey."