Bernie Sanders and Elizabeth Warren are mostly stable at 15% and 14% respectively.

Pete Buttigieg, at 5%, is the only other candidate at 5% or above.

One of the more interesting phenomenons in our poll comes from a question which asks potential Democratic primary voters the candidates they are interested in hearing more about besides the candidate they support.

Following the June debates, there was a lot of interest in candidates not named Joe Biden or Bernie Sanders. At least 15% of voters said they were interested in hearing more about Cory Booker (17%), Pete Buttigieg (23%), Julián Castro (16%), Kamala Harris (30%) and Elizabeth Warren (24%).

Meanwhile, the same 15% and 16% continue to want to hear more about Biden and Sanders respectively.

It shouldn't be too surprising that a debate would shake things up. The first debate was the first time many voters saw these different candidates in action.

But our poll suggests that interest was just a passing fancy for now.

While we still have a long way to go until the first votes are cast, Biden and Sanders are holding onto their roughly 30% and 15% of the vote respectively. 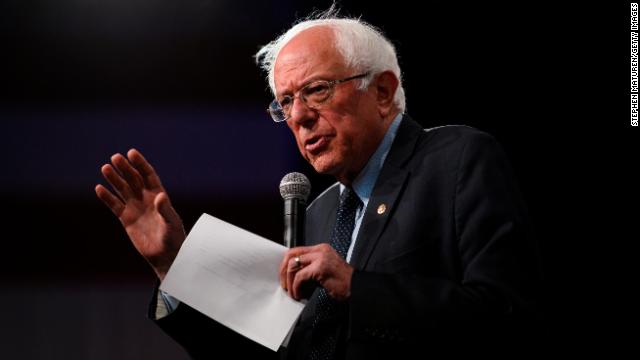 No one has had more consistency in our polling than Bernie Sanders. In every single CNN poll taken since October 2018, he's been within 4 points of 15% (his current vote share).

While Sanders' polling is certainly not in an upward swing, it's not going down either. His 15% is actually 1 point above his 14% in late June. This 15% base is largely mirrored in other national polling.

Part of the Vermont senator's stability is that his voters are with him on the issues. In our last two polls, he was the only one of the top polling candidates who did better among voters who prized issue agreement over electability. That marks a contrast with Joe Biden and Sanders' liberal rival Elizabeth Warren.

Sanders' also have a unique demographic quality. They're young: he wins those under aged 50 in our poll, while failing to crack double digits with those 50 years and older.

Sanders' base is not large enough to win a Democratic nomination. It is, however, more than large enough for him to stick around. That's especially true with all the money he's raising. 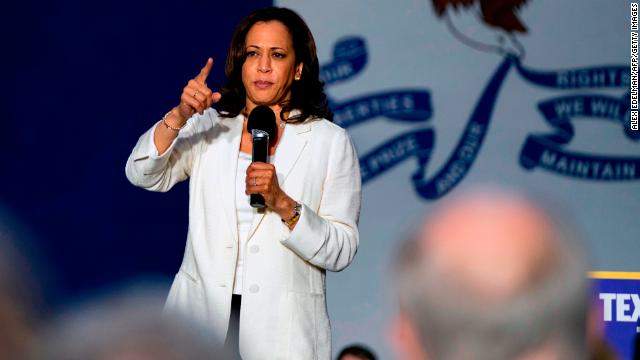 Kamala Harris was off and running after the June debates. She hit 17% in our poll and 20% in Quinnipiac University's poll following her performance on the debate stage in Miami.

Now in our latest polls, Quinnipiac and we have her at 7% and 5% respectively.

The second debate in Detroit didn't cause most of Harris' drop. She was already down to 12% in a late July poll by Quinnipiac.

Still, the California senator seemed to be holding onto some of her first debate bounce coming into the CNN debates. I wrote at the time "why Kamala Harris needs another strong debate." That didn't happen.

Harris is now considerably weaker across the board. She dropped by over 10 points with whites and nonwhites. She declined by 9 points or more with those under the age of 50 as well those aged 50 and older.

Her biggest drop might have been among liberals. She went from 24% in late June to only 4% now.

Harris' decline is seen in other questions too. When asked which candidates they'd like to hear more about, 30% said Harris in late June. That was more than any other candidate. Now, only 18% say they want to hear more about Harris. That's slightly behind Elizabeth Warren, who clocked in at 20%.

For now, the polling puts Harris not in the first or even second tier. She's in a third tier with Pete Buttigieg.

Our latest poll is merely the latest to demonstrate the dangers of reading the Twitter tea leaves.

Twitter Democrats are far younger than actual Democratic primary voters. That's a big deal when you consider that Joe Biden actually trails Bernie Sanders 22% to 21% among voters under the age of 50 in our poll. He has a huge 37% to 12% advantage over Elizabeth Warren (with Sanders back at 7%) among voters 50 years and older in the poll. Keep in mind, those under 50 and those 50 and older make up about the same portion of the electorate.

Liberal social media users are far louder than moderate or conservative social media users. Again, this fact makes it seem like Biden has far less support than he has. Warren has 23% among liberals in our poll, while Biden and Sanders are right behind her at 22%. Biden's at 34% among self-described moderates and conservatives, while no one else reaches double digits with this group in our poll. Liberals and moderates/conservatives each make up about 50% of potential Democratic primary voters.

Bottom line: Twitter is going to make Biden seem much weaker than he is. 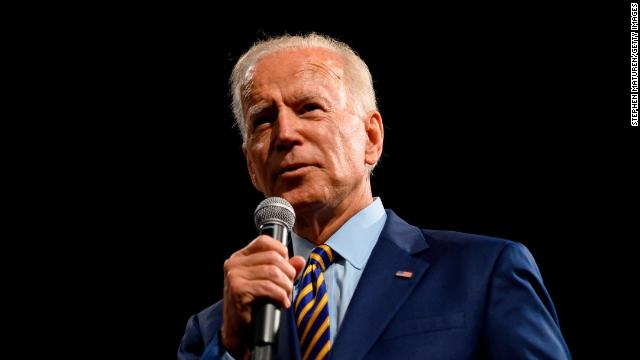 One of the biggest questions heading into this primary season was whether Joe Biden would fall flat on his face upon entering. Many candidates are better in the hypothetical than real world, and Biden certainly has made his faux pas and gaffes.

The truth, however, is that the former vice president is pretty steady. With the exception of a major upswing upon his announcement and major decline following the first debate, Biden's been hovering around 30% in the polls for about 10 months now.

Weak front-runners in past years had already given up their national leads by this point. Former Florida Gov. Jeb Bush had dropped to 13% in an August 2015 CNN poll. He lagged well behind Donald Trump.

Biden's 29% is much better than former Connecticut Sen. Joe Lieberman's 17% in an August 2003 CNN poll as well.

Candidates polling at what Biden is nationally win nominations about 40% of the time.

But perhaps most important is what our poll cannot show. Biden's national lead is backed up by smaller (though still consistent) advantages in the early states of Iowa and New Hampshire. Most failed front-runners like Bush, Lieberman and former New York City Mayor Rudy Giuliani were well behind in the early states by this point. 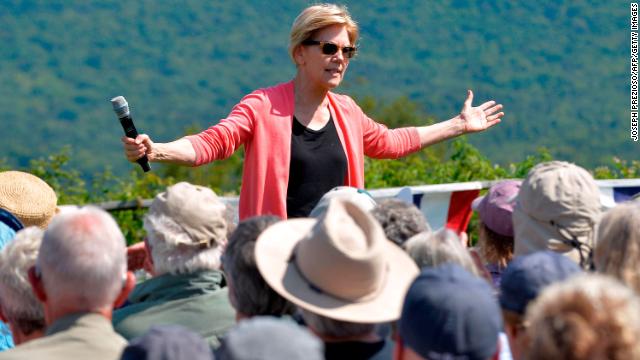 This new CNN/SSRS poll is the third live interview poll taken since the CNN debates in late July. Fox News and Quinnipiac University have also polled the race. Each new poll, of course, is likely to give a slightly different answer to who Democrats nationwide want as the Democratic nominee.

What is clear from all three polls is that former Vice President Joe Biden leads the Democratic race. He's at 29% in our poll, 31% in Fox News' poll and 32% in Quinnipiac's poll.

What's less clear is who is second place. Fox and Quinnipiac have Sen. Elizabeth Warren in second at 20% and 21% respectively. We have Warren in third at 14%. Furthermore, we show no movement for the Massachusetts Democrat since the second debate, while the other two have her up more than 5 points each during that same time period.

Meanwhile, we have Vermont Sen. Bernie Sanders in second at 15%. Fox and Quinnipiac have him at 10% and 14% respectively.

The obvious solution to the differences across polls is to average. Doing that gets you Biden 31%, Warren 18% and Sanders 13%. This would indicate that Warren is up somewhat compared to where she was before the CNN debates, but not by nearly as much as the other live interview pollsters have found.

Our CNN poll, with a margin of error of +/- 6 points, has findings within what you'd expect given a random sampling of the potential Democratic population. 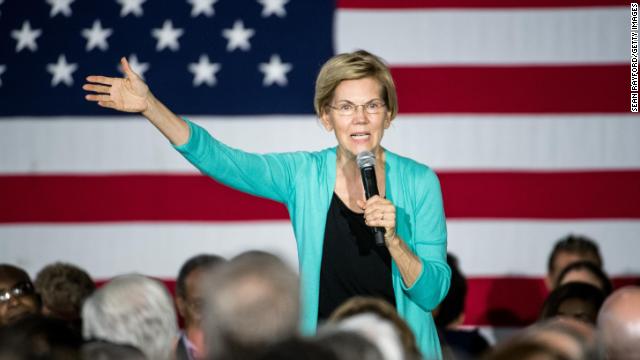 No one can doubt that Elizabeth Warren is in a much better position than she was at the beginning of the year. She is, in Chris Cillizza's and my estimation, the candidate with the second best chance of winning the Democratic nomination. The betting markets have her as the No. 1 most likely nominee.

Yet, it's worth stepping back and realizing how the Massachuset Democrat's support is concentrated in a few circles.

Warren is by far the No. 1 candidate of self-described very liberal voters. Averaging our poll this month with our last one (in which her overall standing is nearly identical), Warren takes 32% of the very liberal vote. No other candidate comes within 10 points.

Warren, however, gets only 10% among all other voters. It's not even as if it's a gradual decline as you go more toward the center. Even among somewhat liberal voters, she rings in at 13%.

The senator also seems to have a real appeal to whites with a college degree. Across our last two polls, she's averaged 22% with this group. Warren's at 11% with all other voters.

Well-educated whites and very liberal voters are likely not enough to win Warren the nomination. About 80% of potential Democratic primary voters are not very liberal, and about 70% are not whites with a college degree.

The good news for Warren is that these voters are a bigger part of the pie in Iowa, where she's running more strongly than she is nationally. 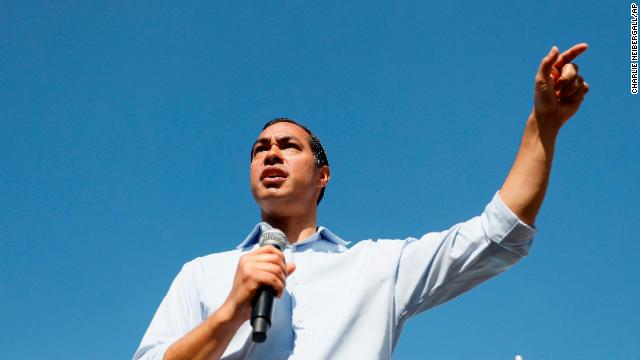 Castro got just 2% in our poll. That, however, is enough. Under rules set by the Democratic National Committee, candidates need to meet a fundraising benchmark (which Castro already has) and get at least 2% in at least four qualifying polls released between June 28 and August 28. Our poll marks the fourth survey in which Castro hit 2%.

Castro got into the debate within 10 days of the qualifying window closing.

Hawaii Rep. Tulsi Gabbard also hit 2% in our poll. This is the second poll she can use to get into the September debates. It seems unlikely that she'll get two more polls before the deadline closes, but stranger things have happened.

Billionaire Tom Steyer is still one poll short of the four he needs to qualify for the September debates. He was at 1% in our poll. The three qualifying polls that have put Steyer at 2% or more have been from Iowa, New Hampshire or South Carolina (i.e. early primary states). That's not surprising given he's spending millions on advertising in those states.