The fight to win the 2020 Iowa Democratic caucuses could barely be any tighter. Bernie Sanders comes in at 20%. Just behind him are Elizabeth Warren at 17%, Pete Buttigieg at 16% and Joe Biden at 15%.

The poll represents real movement for Sanders and Buttigieg. Sanders has climbed in each of our last two polls including from 11% in September. Buttigieg has dropped from 25% in our last poll in November.

No other candidate reaches double digits.

Our poll asked likely caucusgoers about a bunch of different factors and whether it would be important to who they would caucus for. Now for those who already say their mind is made up, this question doesn't really matter all that much. For those who say they could change their mind or don't have a first choice, these factors could be of great importance.

This 14-point difference was the largest gap between the persuadable caucusgoers and those who aren't on any of the factors we tested.

Perhaps then it shouldn't be too surprising that electability beat out issue agreement among this group. The clear majority (59%) of persuadable caucusogers said that beating Trump was most important compared to 37% who said issue agreement. This 22-point gap shrinks to 6 points among those who say their minds are already made up. 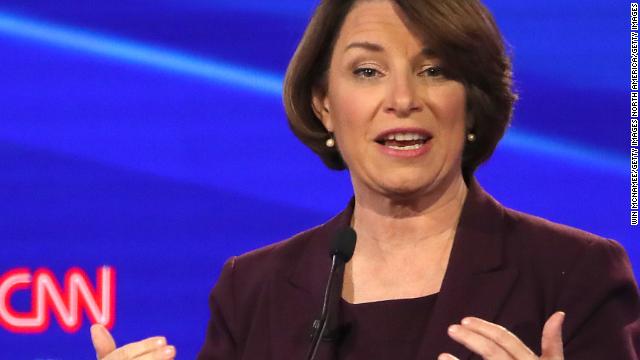 One of the big remaining questions of the 2020 Democratic primary has been whether Amy Klobuchar would be able to break through to the top tier. The answer, with the clock ticking down to the caucuses, seems to be no.

She's the first choice of 6% of likely Iowa caucusgoers in our latest poll. That's the same as it was two months ago.

The numbers underneath the hood are pretty much the same, too. Less than a majority (41%) say they are at least actively considering caucusing for Klobuchar. That's only 2 points higher than in November, and it's well below where the top tier is polling.

Klobuchar's very favorable rating is at 18%. That's actually down a smidge from 20% in November.

The one piece of good news for Klobuchar is that we've had a candidate in recent history who was polling at her level and went on to win the caucuses: Republican Rick Santorum in 2012. Just like this year, the leader was polling right at around 20%.

Still, the hour is getting awfully late for the senior senator from Minnesota.

Chances are Klobuchar will miss the viability threshold in most places, which means her 6% of caucusgoers will be up for grabs for the other candidates. We don't have a large enough sample to know exactly what they're feeling, though her more moderate brand of politics may be better suited to Pete Buttigieg or Joe Biden. 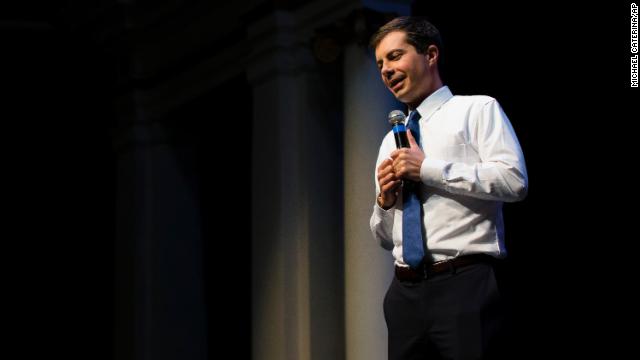 This is not what I would call a great Iowa poll for Pete Buttigieg. His first choice support has declined from 25% to 16%. Going deeper, there are plenty of other signs that Buttigieg's support isn't what it used to be.

The potential pool of Buttigieg backers also seems to have slipped. Now, 60% of likely caucusgoers say they are at least actively considering him. That was 68% back in November. (The only candidate to feature a similar decline was Elizabeth Warren going from 66% to 59%.)

The one good piece of news? I mentioned it earlier: Buttigieg does well among the 32% backing a candidate who isn't likely to meet the viability threshold or those who have no first choice. Among 32% of likely caucusgoers, here are who they are at least actively considering: Buttigieg 55%, Biden 53%, Warren 43% and Bernie Sanders 41%.

You've heard over and over again that Democrats are putting more of an emphasis on electability than in prior years. Indeed, 55% of likely caucusgoers say they prefer a candidate who can beat Donald Trump over one who shares their positions on the major issues. Only 40% say issue agreement is more important.

Yet, this 15-point difference is the smallest it's been since the beginning of 2019. In fact, the gap had been more than double that in every poll taken in 2019.

It would be easy to dismiss this poll as a one-off, but it comes following a similar shrinking edge for electability in our last CNN national poll. Our December poll was the first time this cycle in which less than a majority (47%) of potential Democratic primary voters have said electability tops issue agreement.

The trend comes at a time when the candidate rising (Bernie Sanders) is the one whose supporters prefer issue agreement. Now, it's clear which way the relationship goes. That is, are people picking Sanders because electability is becoming less important or are more people saying it is less important because they now like Sanders more.

Whatever the reason, these numbers do indicate that maybe electability concerns won't hurt Sanders the way you might think. 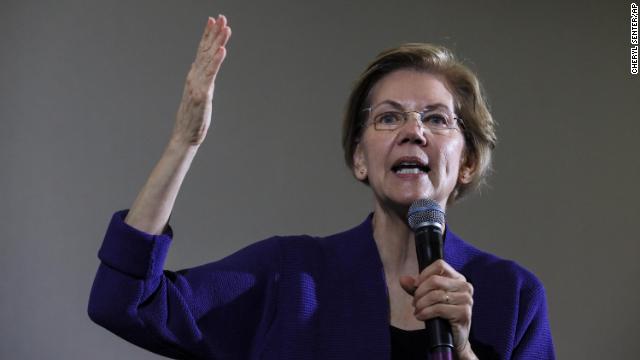 One of the questions that I love in our Iowa polls is whether a likely caucusgoer backed Hillary Clinton or Bernie Sanders in the 2016 caucuses.

No other top tier candidate has as small of a gap as Warren. Buttigieg gets 18% among Clinton backers and 13% among Sanders' 2016 supporters. For Biden, he gets 24% among Clinton caucusgoers and 2% among those who caucused for Sanders.

Like Biden, Sanders shows a very large gap. He's pulling in 44% of his 2016 backers and a mere 4% of Clinton's. In other words, Sanders really isn't expanding on his base. Yet, merely holding his 2016 base (given he won nearly 50% of the Iowa vote) may be enough.

Indeed, the reason Sanders has been climbing is that he is putting his base back together. Back in September, he earned a mere 28% of those who caucused for him in 2016. That climbed to 39% in November. Now, it's 44%, which is good enough to not have anyone in front of him for the moment.

"Viability" is a key word in Democratic caucuses. If a candidate's supporters don't meet it (typically 15% support in an individual caucus), then they have to reallocate themselves to other candidates. Figuring out who may benefit from this process isn't the easiest thing to do, but it's something that could benefit Joe Biden and Pete Buttigieg.

Right now, all the top tier are at or above that 15% threshold, but about a third of caucusgoers (32%) are either backing candidates who don't reach the threshold or are undecided about who to caucus for.

So who are these 32% caucusgoers likely to back if their support is reallocated? We have two ways of finding out. We asked those who choose a candidate for their second choice. We also asked folks who they are actively considering caucusing for.

Among those who are backing a candidate not in the top tier or aren't backing any candidate (32% in total), here are who they are at least actively considering: Buttigieg 55%, Biden 53%, Warren 43% and Sanders 41%.

The big issue here for Sanders and Warren is that they may block each other. For example, 73% of Warren backers in the first choice are at least actively considering Sanders, but that won't matter if Warren hits the viability threshold. 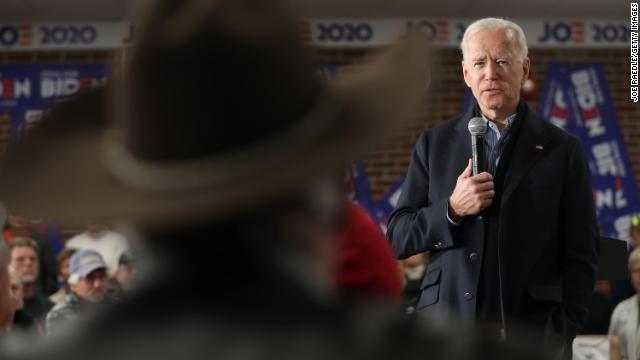 Joe Biden is stagnant in Iowa. His 15% now is the same 15% he had in November, despite touring the state extensively.

But it's not that 15% that would worry me if I were a Biden backer as much as the underlying data.

We know, for instance, that the very favorable rating is highly correlated with support and can predict future rises in a candidate's standing in the horserace.

Perhaps more scary for Biden is that just 44% of his backers say their mind is made up. Now, that's not much different than the 48% for Warren or 40% for Buttigieg. It is well below the 59% for Sanders, however. Moreover, a strength of Biden's has been his consistency. This number suggests that consistency may even be in jeopardy. 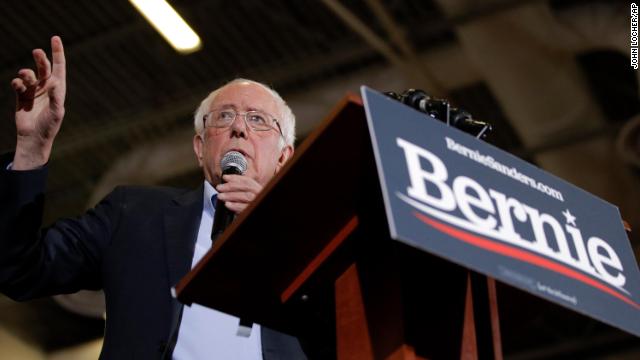 Beyond seeing his numbers climb in Iowa, Bernie Sanders has to be reassured by what his supporters say about him.

A majority (59%) of Sanders' supporters say their mind is made up on who they are caucusing for. Less than a majority say that for the other top tier candidates.

History suggests candidates basing their support on electability have softer bases than those based around the issues.

The only big warning sign I see for Sanders is that he is the second choice of only 11% among the about 20% of caucusgoers who list someone other than the top tier as a first choice.

Given the reallocation rules of caucuses and that some lower tier candidate supporters may abandon their first choice, this suggests perhaps a limited ceiling for Sanders.