The hearing: Gina Haspel, Trump's nominee for CIA director, went in front of the Senate Intelligence Committee in her public confirmation hearing. There was then a private hearing to discuss classified information.

Line of questions: Haspel faced sharp questioning about her role in the CIA's interrogation tactics and the destruction of tapes.

Gina Haspel, President Trump's nominee for CIA director, testified before the Senate Intelligence Committee this morning at her confirmation hearing.

She needs votes from Democratic and Republican senators to be confirmed as the next CIA director.

That could be a challenge for Haspel since Democrats argued that the public should know more about her record.

Still, many Democrats have signaled they would wait for the hearing before weighing in on whether they'll support Haspel -- at least publicly.

Some Democrats are now talking. Here's what they're thinking:

During the public hearing, Haspel was grilled about her involvement in the CIA's interrogation tactics and her role in the destruction of tapes.

Here's what we learned: 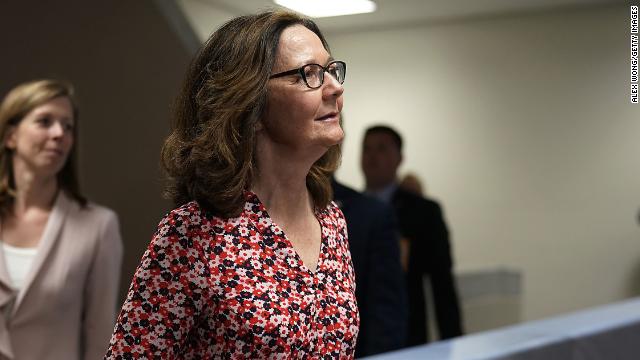 National security officials and some Republicans are preparing contingency plans in case Gina Haspel, Trump's nominee to lead the CIA, falters amid questions about her past role in the George W. Bush-era extreme interrogation program and destruction of videotapes of waterboarding, five sources familiar with the matter tell CNN.

"The reason you're seeing contingency planning isn't a lack of confidence in Gina, but because they're seeing the Democrats band together ... they're worried they're not going to have the votes," said one former national security source familiar with conversations on Capitol Hill.

There has always been some level of concern that Haspel was in trouble, based on her past work for the agency and the public controversy it's inspired, according to one White House official. However, that official said they still believe she will be confirmed.

However, one of the contingency plans being discussed is this:

Democratic Sen. Jack Reed quizzed Gina Haspel on whether she would make personal pledge of loyalty to Trump if he should ask.

Haspel said she's worked closely with Trump and doesn't think that would happen.

"Senator, my only loyalty is to the American people and the constitution of the United States," she said.

"I am honor-bound and will work very hard to deliver to this President and his administration the best performance and intelligence CIA can deliver."

"I don't believe that torture works," she said.

"I believe that in the CIA's program, and I'm not attributing this to enhanced interrogation techniques. I believe, as many people, directors who have sat in this chair before me, that valuable information was obtained from senior Al Qaeda operatives that allowed us to defend this country and prevent another attack."

After Haspel's lengthy response, Harris asked, "Is that a yes?"

Haspel quickly responded, "No, it's not a yes."

"We got valuable information from debriefing of Al Qaeda detainees, and I don't think it's knowable whether interrogation techniques played a role in that." 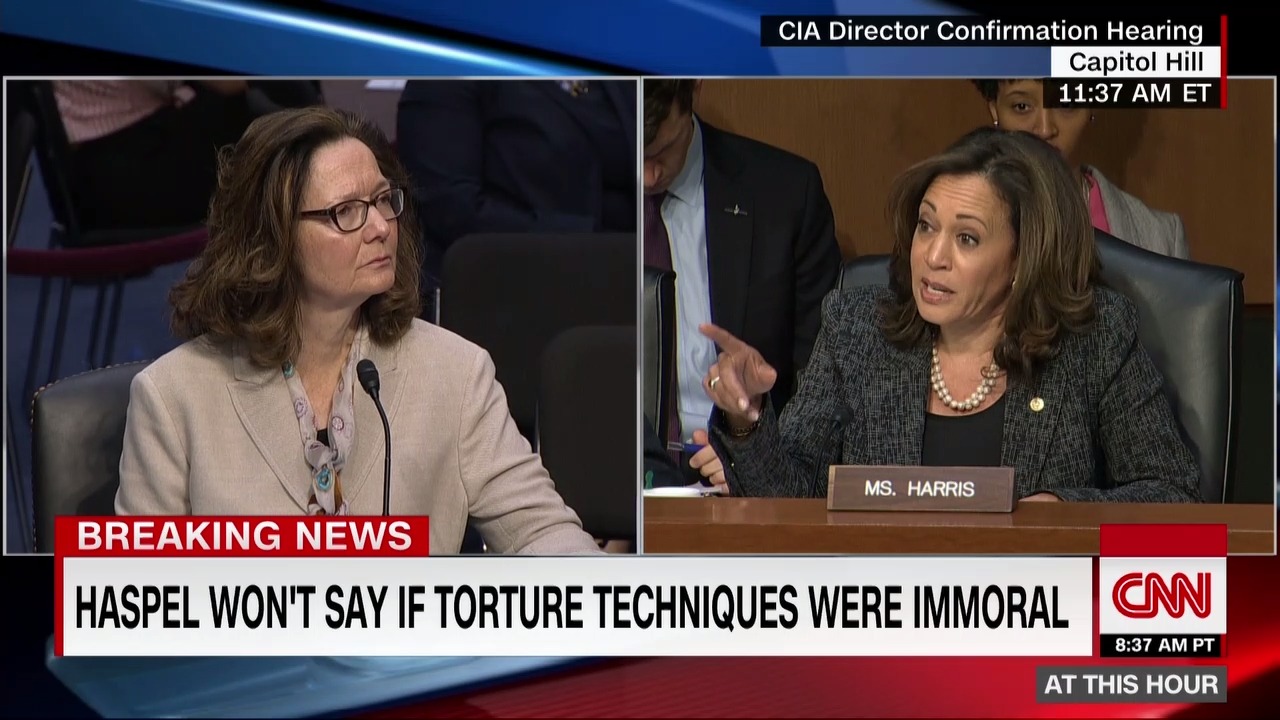 Sen. Kamala Harris pressed Gina Haspel if she felt the CIA's previous interrogation techniques were immoral, asking her multiple times to answer with a simple yes or no. Haspel wouldn't say.

Sen. Kamala Harris: One question I've not heard you answer is do you believe that the previous interrogation techniques were immoral?

Gina Haspel: Senator, I believe that CIA officers to whom you referred --

Harris: Senator, I believe that CIA did extraordinary work to prevent another attack on this country given the legal tools.

Harris: Please answer yes or no. Do you believe in hindsight that those techniques were immoral?

Haspel: Senator, what I believe sitting here today is that I support the higher moral standard we have decided to hold ourselves --

Harris: Can you please answer the question?

Haspel: Senator, I believe that we should hold ourselves to the moral standard outlined in the army field manual.

Harris: Okay. So I understand that you -- you've not answered the question, but I'm going to move on.

"I would not allow CIA to undertake activity that I thought was immoral, even if it was technically legal," Haspel said. "I would absolutely not permit it."

Capitol police removed a protester from the hearing after she interrupted Gina Haspel during question.

As the protester was escorted out of the building, you could hear her yelling, "bloody Gina! Bloody Gina!" 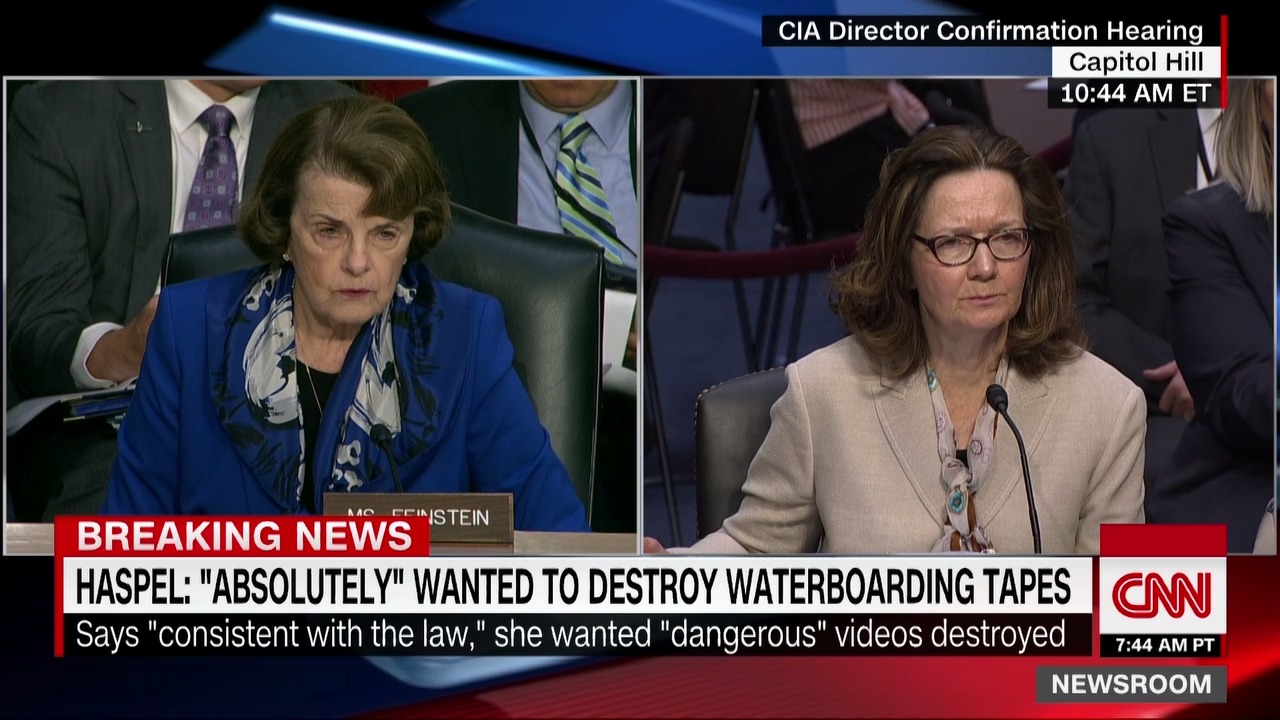 Sen. Dianne Feinstein, who earlier stated she liked Gina Haspel "very much" but was troubled by her still-classified past, asked the nominee if she was "an advocate for destroying the tapes."

"Senator, I absolutely was an advocate," Haspel said, saying while she never watched the tapes — she described those as 92 individual tapes of one detainee being tortured — she knew CIA officers' faces were on them.

She said that "was very dangerous at a time when there were unauthorized disclosures exposing the program."

Sen. Mark Warner just asked Gina Haspel what she would do if she were asked to torture detainees again.

Stating she has a "very strong moral compass," Haspel said, "I support the higher moral standard that this country has decided to hold itself to. I would never, ever take CIA back to an interrogation program."

"First of all, CIA follows the law. We followed the law then. We follow the law today. I support the law. I wouldn't support a change in the law, but I'll tell you this, I would not put CIA officers at risk by asking them to undertake risky, controversial activity again."

The Senate Select Intelligence Committee found those techniques were "not an effective means of obtaining accurate information or gaining detainee cooperation," though some Republican senators said they believed the program saved lives.