Our live coverage has ended. See key moments of the hearing in the posts below. 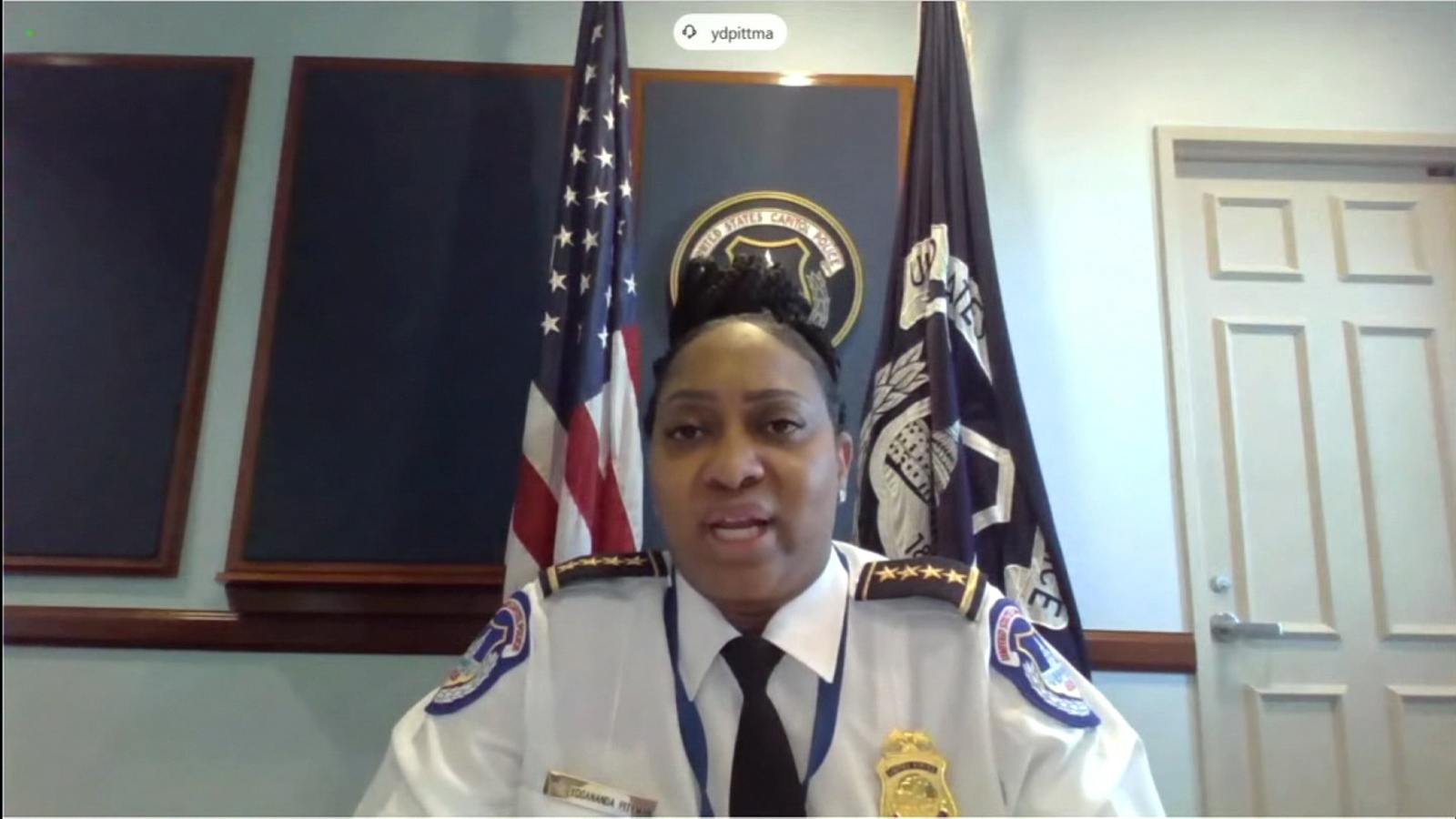 The House hearing has wrapped. Two key Capitol security officials were grilled in the House Appropriations committee about the security failures that occurred during the Capitol riot on Jan. 6, and the new measures being implemented to prevent another attack.

Acting Capitol Police Chief Yogananda Pittman told lawmakers that the emergency notification system that the US Capitol police officers used during the Jan. 6 insurrection underwent "a number of changes."

Pittman said that they are working to improve the accuracy and response time with sending out "pre-prepared messages" and working with law enforcement and community partners to make sure the community is aware of notifications and improvements from the US Capitol Police's command center.

Earlier in today's hearing, Pittman said the Capitol complex has been "hardened," and the department is "beefing up its flow of information and now holds daily calls with its intelligence partners."

She admitted that the Capitol lockdown “was not properly executed,” and some officers were “unsure of when to use lethal force.”

“We are ensuring that our incident command system protocols are adhered to going forward and reimplementing training in those respective areas,” Pittman said.

“We're addressing those operational challenges, but I want to make clear that these measures alone would not have stopped the threat we faced to stop a mob of tens of thousands requires more than a police force. It requires physical infrastructure or a regiment of soldiers,” she added.

Asked about the timeline for removing fencing and other extra security precautions around the US Capitol, acting US Capitol Police Chief Yogananda Pittman said Thursday that law enforcement officials are aware of new threats against Congress “with a direct nexus to the State of the Union” involving members of militia groups involved in the Jan. 6 riots.

“We know that members of the militia groups that were present on Jan. 6 have stated their desires that they want to blow up the Capitol and kill as many members as possible with a direct nexus to the State of the Union, which we know that date has not been identified,” she told House lawmakers during Thursday’s hearing.

“We know that the insurrectionists that attacked the Capitol weren’t only interested in attacking members of congress and officers. They wanted to send a symbolic message to the nation as to who is in charge of that legislative process,” she added.

CNN has previously reported that US Capitol Police told lawmakers that the razor wire fencing around the Capitol should remain in place until at least September due to lingering security concerns related to threats against members of Congress.

But lawmakers on both sides of the aisle have become increasingly vocal about removing the fencing and sending National Guard troops who remain in Washington back to their home states.

Last month, Pittman proposed permanent fencing around the Capitol but that idea was met with swift resistance from lawmakers, including DC Mayor Muriel Bowser who quickly responded by saying the city will not "accept extra troops or permanent fencing as a long-term fixture in DC."

“We have no intention of keeping the National Guard soldiers or that fencing any longer than what Is actually needed. We’re actively working with a scaled down approach so that we can make sure that we address three primary variables. One is the known threat to the environment, two is the infrastructure vulnerabilities and then that third variable being the limitations the US Capitol’s police knows that it has as it relates to human capital and technology resources,” Pittman said Thursday.

Later in the hearing, Pittman said the fencing around the Capitol is not permanent.

Lawmakers have repeatedly pressed law enforcement and defense officials to explain whether there is a credible threat that justifies keeping those security precautions in place.

CNN previously reported that law enforcement and the Department of Homeland Security are not currently tracking any "credible or specific threats," but are constantly monitoring online chatter about potential violence in Washington DC and against members of Congress.

“The most significant terrorism-related threat currently facing the nation comes from lone offenders and small groups of individuals inspired by domestic extremist ideological beliefs, including those based on false narratives spread over social media and other online platforms," a DHS spokesperson told CNN earlier this month.

Acting US Capitol Police Chief Yogananda Pittman says "numerous lessons were learned" since the Jan. 6 insurrection and in hindsight they should have planned better.

Rep. Tim Ryan asked Pittman that considering the Jan. 3 internal intelligence memo that stated the threat against the US Capitol, why did the US Capitol police "prepare for the worst case scenario?"

At first, Pittman defended their preparation. "We changed the security perimeter plan and all of those things that I mentioned as it relates to how we beefed up what we had," Pittman said.

She then agreed with Ryan's point. "Hindsight is 20/20," Pittman said. "There are numerous lessons to be learned. If we were planning for a level six, I believe that Chief Sund, if he could get that day back would have planned for a level ten security posture. We would of have assets and resources on the ground prior to. We would have changed."

More than 10,000 pro-Trump rioters entered Capitol grounds and about 800 breached the building during the Jan. 6 attack on the Capitol, the acting chief of the US Capitol Police told lawmakers on Thursday.

The estimates from acting US Capitol Police Chief Yogananda Pittman were the most specific numbers offered publicly by the police force, which has provided very little information to the public since the attack seven weeks ago.

“We don’t have an exact number,” Pittman said, but the estimates indicate that “there were excess of 10,000 demonstrators that traversed the (Capitol) campus on Jan. 6.”

She added, "we estimate that it was approximately 800 demonstrators” that breached the building.

Federal prosecutors have charged more than 250 people in connection with the attack – a small slice of the massive mob of Trump supporters that stormed the building and disrupted the Electoral College proceedings.

At least one lawmaker criticized Pittman and the USCP for their lack of transparency.

“The United States Capitol Police is notoriously opaque,” said Rep. Jennifer Wexton, a Virginia Democrat. “You guys have had zero public press conferences in your department in the nearly two months since the attack.”

The acting Chief of the US Capitol Police told lawmakers on Thursday that there is “no evidence” that race played a role in the department’s failure to bolster security before the Jan. 6 attack.

The mob of Trump supporters that attacked the Capitol that day was overwhelmingly White, according to videos. There were also several flags, signs and symbols of racist, White supremacist and extremist groups that were displayed along with Trump 2020 banners and American flags at the US Capitol.

Many lawmakers and law enforcement experts have said police may have taken the threats more seriously, and responded more aggressively, if the crowd was full of Black rioters.

“I have no evidence whatsoever that suggests there was any discrepancy based on our security posture and as it relates to making enhancements or not based upon race,” acting Chief Yogananda Pittman said, noting that she is the first Black person and first woman to lead the US Capitol Police.

President Biden said one day after the attack that he believed racial disparities were at play.

“You can’t tell me that if it had been a group of Black Lives Matter protesters… they wouldn’t have been treated very differently than the mob of thugs that stormed the Capitol,” he said last month.

Acting US Capitol Police Chief Yogananda Pittman said the response to the Jan. 6 riot was a failure on multiple fronts.

Rep. Jaime Herrera Beutler, a Republican from Washington, asked Pittman why leaders did not “maintain or regain control” of the communications system, because “you had a bird’s-eye view advantage.”

Pittman said that commanders should have been directly responsible for officers on the ground, but they were “overwhelmed” and needed to assist those officers.

“I think it is a multi-tiered failure, if you will,” Pittman said.

Herrera Beutler said she was “frustrated” with Pittman’s responses.

“I'm hearing a lot of process and a lot of almost explaining why there is a problem, versus hearing how you're going to make sure that there is a command center who speaks into the earpieces of the officers and provides direction and leadership,” she said.

Pittman was sworn in as acting chief on Jan. 8, and she received a vote of no confidence from members of the Capitol Police earlier this month.

A senior House Democrat said Thursday the board that oversees the US Capitol Police is “obsolete” and isn’t keeping members safe, blaming the board’s bureaucracy for the slow response during the Jan. 6 insurrection.

The three-member board is comprised of the chief of the Capitol Police, the House sergeant at arms and the Senate sergeant at arms. Their lack-of coordination during the attack has been a major focus of congressional oversight hearings this week, and members of the board have contradicted each other about the timeline that day.

“At the moment I view it as a vestigial, it’s just there,” said Rep. Rosa DeLauro, the Democratic chairwoman of the House Appropriations Committee. “It doesn’t appear to do a hell of a lot, nor did it do with a hell of a lot to deal with this situation on January 6. It’s like your appendix. It’s just there, but doesn’t have a real function.”

Her comments came two days after a Senate hearing where the three officials who were on the Capitol Police Board during the attack said that the bureaucracy creates a situation where no single person has ultimate responsibility to secure the complex.

These three officials all resigned their positions after the insurrection.

The acting chief of the US Capitol Police told lawmakers Thursday that the department didn’t follow protocols during the Jan. 6 insurrection for how to deal with an emergency situation, largely because officers were overwhelmed.

“On January 6th, our incident command protocols were not adhered to as they should have,” acting chief Yogananda Pittman, who took over after the attack, told a House appropriations subcommittee.

She made the comment in response to questions about communication breakdowns that hampered the response while pro-Trump rioters stormed the Capitol.

She said the failures stemmed from the fact that police lines were so overrun that commanders who oversee the emergency response were instead physically fending off rioters.

“When there’s a breakdown you look for those commanders with boots on the ground to provide that instruction,” Pittman said. “That did not happen, primarily because those operational commanders at the time were so overwhelmed, they started to participate and assist the officers… versus providing that guidance and direction”

Rep. Jaime Herrera Beutler, a Republican from Washington state, said she was with police officers during the attack and saw the communication failures happening in real-time.

Acting US Capitol Police Chief Yogananda Pittman outlined some security measures being implemented to prevent an attack like the one on Jan. 6 from happening again.

Pittman said the Capitol complex has been "hardened."

“The department is beefing up its flow of information and now holds daily calls with its intelligence partners,” she said.

While some increased security protocols at the Capitol complex “are not popular,” she said they are “necessary in the short-term.”

She said the Capitol lockdown “was not properly executed,” and some officers were “unsure of when to use lethal force.”  Pittman also noted that radio communications to officers were "not as robust."

“We are ensuring that our incident command system protocols are adhered to going forward and reimplementing training in those respective areas,” Pittman said.

“We're addressing those operational challenges, but I want to make clear that these measures alone would not have stopped the threat we faced to stop a mob of tens of thousands requires more than a police force. It requires physical infrastructure or a regiment of soldiers,” she added.