The latest on Biden's transition

Our live coverage has ended. Read more about the Biden transition here.

YouTube said Wednesday that it will now begin to remove new content posted to its platform that “misleads people by alleging that widespread fraud or errors changed the outcome of the 2020 U.S. Presidential election.”

The company said the decision comes after enough states certified election results to determine Joe Biden as the US President-elect.

If the company is able to keep to its commitments, YouTube’s announcement could have an impact on high-profile right-wing channels and personalities, including President Trump and One America News Network, which have spread conspiracy theories suggesting that Biden’s victory is illegitimate.

“For example, we will remove videos claiming that a Presidential candidate won the election due to widespread software glitches or counting errors. We will begin enforcing this policy today, and will ramp up in the weeks to come,” YouTube said in a blog post.

Despite the Supreme Court delivering a crushing blow to Trump's long shot bid to invalidate President- elect Joe Biden's victory, Trump is continuing to tweet on court cases and claiming the rejected SCOTUS case was “not my case.”

This is Trump’s first reaction to the Supreme Court’s denial of a request from Pennsylvania Republicans to block certification of the commonwealth's election results.

“This was not my case as has been so incorrectly reported. The case that everyone has been waiting for is the State’s case with Texas and numerous others joining. It is very strong, ALL CRITERIA MET. How can you have a presidency when a vast majority think the election was RIGGED?” Trump tweeted.

Trump is likely referring to Texas Attorney General Ken Paxton who filed a brash and sweeping complaint Tuesday that asked the court to overturn Biden's wins in the swing states of Pennsylvania, Michigan, Wisconsin and Georgia.

"We will be INTERVENING in the Texas (plus many other states) case. This is the big one. Our Country needs a victory!" Trump also wrote Wednesday.

The head of the NAACP planned to push President-elect Joe Biden and Vice President-elect Kamala Harris to create the role of civil rights czar, following a model Biden has already established in naming John Kerry to a Cabinet-level position as a climate envoy, during a virtual meeting Tuesday.

The proposal was to come during a virtual meeting Biden and Harris held with the leaders of civil rights organizations Tuesday in Delaware. It's part of an effort by Black leaders, who delivered Biden to victory in the Democratic primary, to hold him to his promise to nominate the most diverse Cabinet in history.

"We oftentimes as a country talk about the reaction to history as opposed to talking about the opportunity of the future as it relates to diversity and equity. And that's what we want to lean into," NAACP President Derrick Johnson said in an interview before the meeting in which he previewed the proposal.

In a statement, the NAACP called the position it is proposing the "National Advisor on Racial Justice, Equity and Advancement."

Johnson said the call for a civil rights czar is modeled after corporations that have tapped top-level diversity and inclusion officers, and that those posts have been most effective when those officers report directly to the company's leader.

He wouldn't name specific individuals he'd like to see named to such a post, saying he first wanted to "see if there's buy-in by this administration so that we can really see the position come to life." 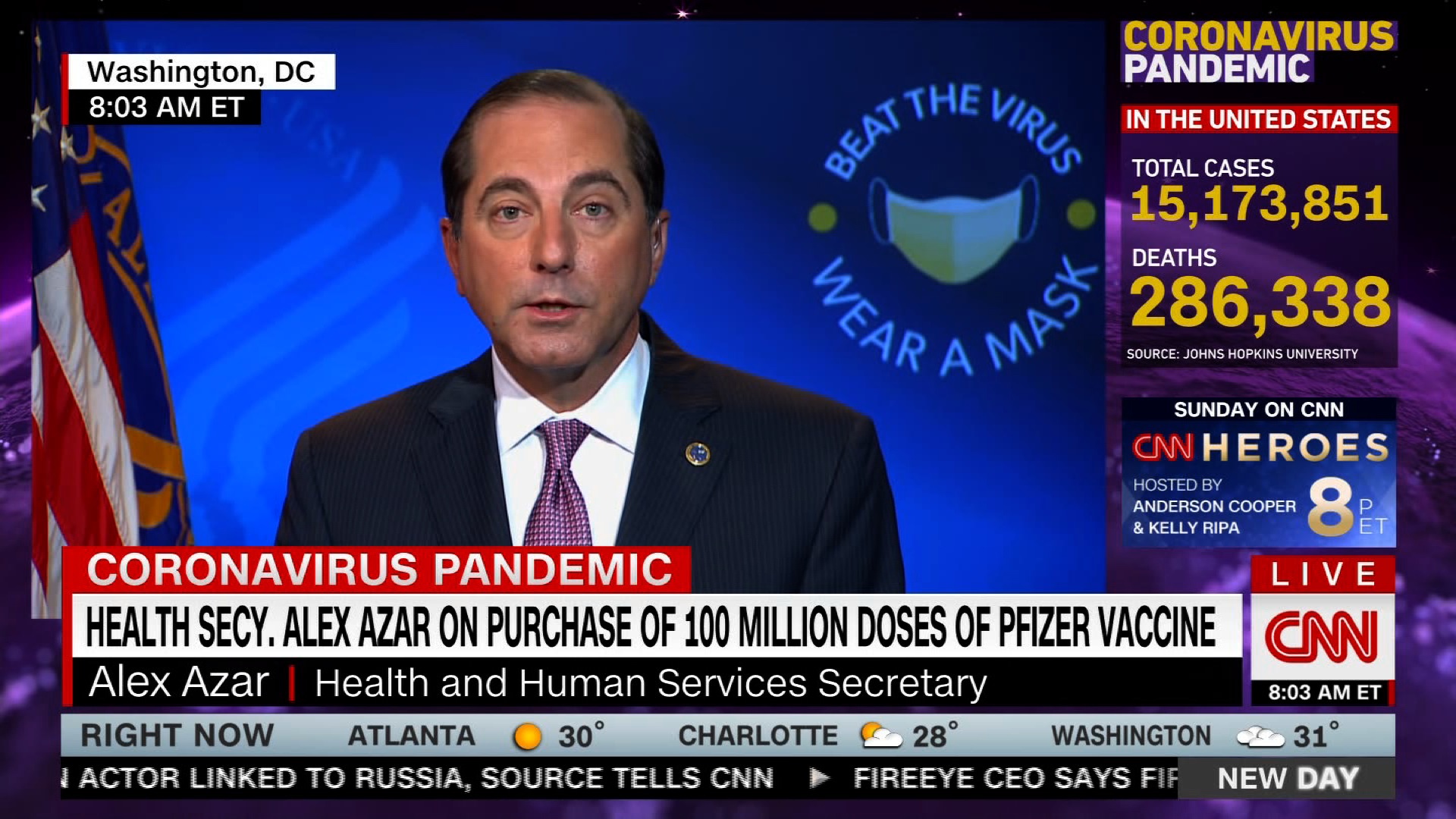 Health and Human Services Secretary Alex Azar said that he has already met with President-elect Joe Biden’s transition team and is willing to meet with Biden's pick for HHS secretary, Xavier Becerra, as well.

“I will be in touch with him as is appropriate. One has to be respectful of the Senate confirmation processes, but I’ll be in touch,” Azar said.

Although Azar didn't have a set date for when he would meet with Becerra, he added that he wants to ensure a "full cooperative professional transition." He said his priority is protecting Americans through the coronavirus pandemic.

“I want to ensure that any transition is as smooth, as professional as possible, because we’re about ensuring the health and well-being of the American people, and that's what matters to me,” he added.

Biden yesterday introduced key members of his health team, including Dr. Anthony Fauci who will serve as chief medical adviser to the President on Covid-19 and will also continue in his role as director of the National Institute of Allergy and Infectious Disease.

Biden also laid out three objectives for battling the pandemic: vaccinating at least 100 million Americans in his first 100 days in office, signing a mask mandate and aiming to safely reopen schools.

President-elect Joe Biden named retired Army Gen. Lloyd Austin as his nominee for secretary of defense, the Biden transition team announced Tuesday. He is set to formally introduce his nominee at an event this afternoon in Wilmington, Delaware.

The former commander of the US Central Command would make history as the first Black person to lead the Pentagon if confirmed by the US Senate.

"Today, I ask Lloyd Austin to once more take on a mission for the United States of America—this time as the secretary-designate of the Department of Defense. I know he will do an outstanding job," Biden wrote in an op-ed published by The Atlantic on Tuesday.

"In his more than 40 years in the United States Army, Austin met every challenge with extraordinary skill and profound personal decency. He is a true and tested soldier and leader. I've spent countless hours with him, in the field and in the White House Situation Room."

Austin has worked closely with Biden in the past. While Biden was vice president, Austin served as the vice chief of staff of the Army and commanding general of US forces in Iraq, and later the commander of CENTCOM. Biden and Austin had discussions on a range of issues, including those in the Middle East and Central and South Asia.

Austin would need a congressional waiver to be confirmed for the civilian post because federal law requires seven years of retirement from active duty before taking on the role. Austin retired from active-duty service only four years ago.

Though the use of the waiver is rare, retired Marine Gen. James Mattis received a waiver from Congress in 2017 to serve as President Trump's defense secretary.

Some Democrats in Congress at the time expressed concerns about setting aside the precedent of maintaining civilian leadership in the military, but the waiver was ultimately approved by both chambers, allowing Mattis to serve in the position until his departure in December 2018.

First, for his initial 100 days in office he will ask every American to wear a mask. The President-elect said he would sign an executive order on his first day in office to require masks, "where I can under the law, like federal buildings, interstate travel on planes, trains and buses."

Second, he said his team will help get "at least 100 million Covid vaccine shots into the arms of the American people in the first 100 days."

Biden said his third priority is to get kids back into schools. He said that if Congress provides the necessary funding and states and cities put strong health measures in place, "My team will work to see that a majority of our schools can be open by the end of my first 100 days.

Americans who went to the polls on Election Day didn't actually select the President directly.

They were technically voting for 538 electors who, according to the system laid out by the Constitution, meet in their respective states and vote for president and vice president once the popular vote totals are completely counted and certified. The electors are set to meet Monday to cast their votes for US president.

These electors are collectively referred to as the Electoral College, and their votes are then forwarded to the president of the Senate, who counts them in a joint session of Congress after the new year.

Here's a look at some key dates from now until Inauguration Day: