In a twitter post Tuesday morning, Wolf confirmed he'd signed the certificate for Ascertainment that formally acknowledges the state's recognition of Biden winning the election.

The certification comes just one day after all of Pennsylvania's 67 counties, under law, had to receive precinct results and certify them to the Secretary of the Commonwealth Kathy Boockvar by the third Monday after the election.

This will now officially award the state’s 20 electoral votes to President-elect Joe Biden.

Wolf went onto thank election officials for their work.

"Again, I want to thank the election officials who have administered a fair and free election during an incredibly challenging time in our commonwealth and country's history. Our election workers have been under constant attack and they have performed admirably and honorably," Wolf said in a news release.

President Trump's campaign is funneling an increasingly large share of its "Election Defense Fund" fundraising to Trump's political action committee, as his opportunities to legally challenge the election results fade.

Even as fundraising emails tell supporters their donations will help "protect the integrity of the election," 75% of donations to the fund are now deposited into the coffers of Trump's fledgling leadership PAC, Save America.

That's up from the 60% share the PAC was receiving last week.

The campaign's "Recount Account" — arguably the account supporters believe they are donating to – only gets a piece of donations above $5,000.

The remaining quarter of any donation goes to the Republican National Committee's general fund, with donations over $35,500 steered to the RNC's legal fund.

The Trump campaign did not respond to CNN's requests for comment.

Their six foreign policy and national security nominees and appointees, which were unveiled yesterday, are expected to join them and speak at the event in Wilmington, Delaware.

Here are some key takeaways from Biden's first wave of nominations and appointments:

Here's a look at which Cabinet nominations Biden has unveiled so far: 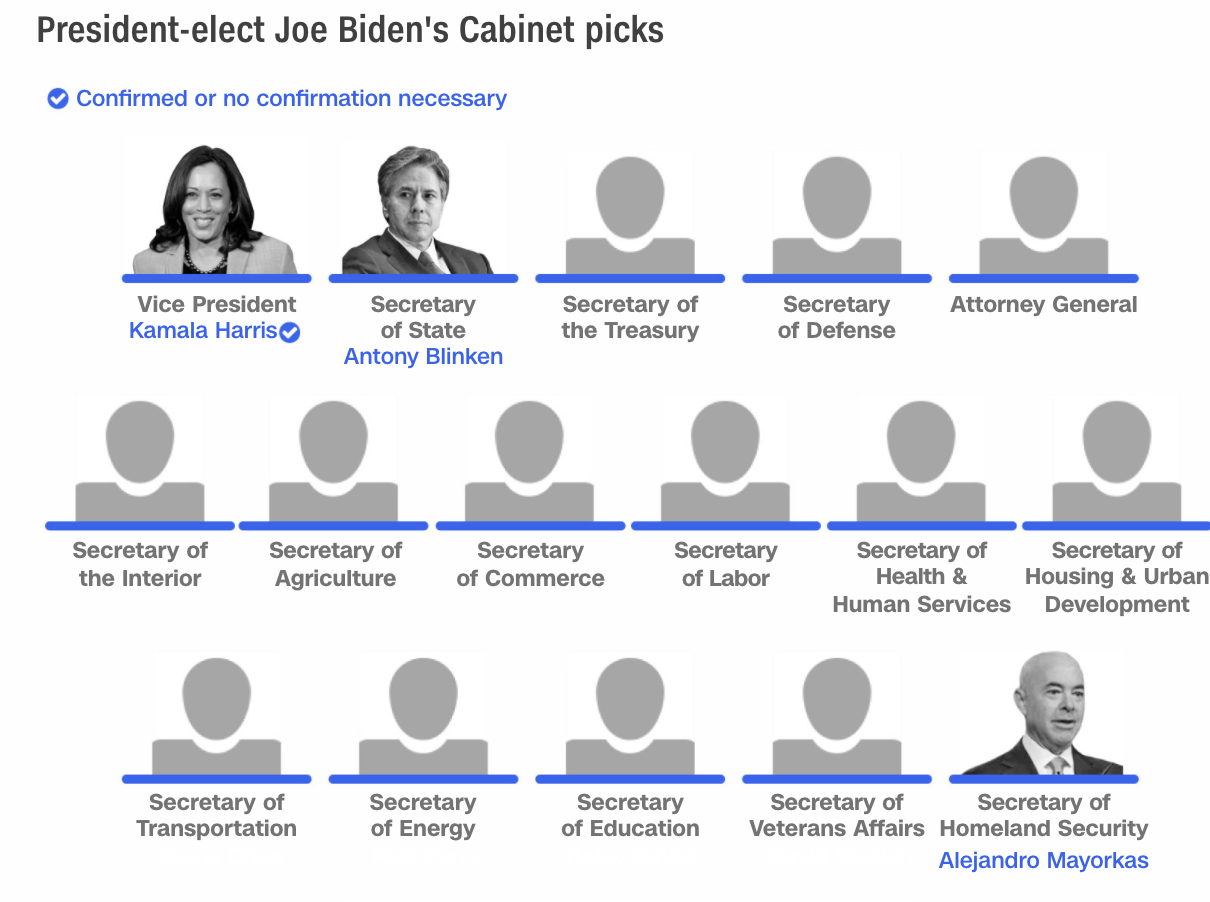 Leadership at the US Centers for Disease Control and Prevention, beset by a Trump White House that was harshly critical of the agency coronavirus response, are anticipating the Biden transition team and the change a new administration will bring, senior health officials tell CNN.

“This is what we’ve been waiting for is for them to send their landing team here and set up shop,” a senior CDC official said.

The senior official added that while it is standard operating procedure during any transition of administration, the expectation is there will be some “rebuilding of the agency” under President-elect Joe Biden.

When asked if there was more enthusiasm among senior leaders at the CDC on Tuesday morning, the official said emphatically, “Yes!”

A federal health official official declined to say if they had spoken directly to anyone from the Biden transition team as of Tuesday morning, but did say having been through numerous administration transitions, “the CDC benefits when that happens quickly.”

“From experience, the faster you get through it the better,” the official said of the transition.

Speaking to the mood in the agency among senior leaders, the official said there did seem to be more enthusiasm that the CDC may be able to restart regular briefings, which were ordered to be stopped by the Trump Administration at the beginning of the pandemic.

“Man oh man, I hope so,” the official said about the CDC returning to a more visible role.

The federal health official with knowledge of operations said, that the CDC remains leading the public health response through its Emergency Operations Center.

The official noted that the CDC has remained in daily contact with states regarding vaccine distribution and rollout. Also, as the nation grapples with record breaking infection and hospitalizations, schools continue to be front and center in the response, the official said.

Following the General Services Administration’s formal beginning of the Biden transition and Michigan's certification of their election results, CNN's Jake Tapper took a moment on Twitter last night to acknowledge four Republican officials who "despite pressure" from President Trump and the Republican Party "remained allegiant" to facts, truth and math following the Trump campaign's challenge of the election results.

Tapper listed the following officials who played a key role in the certification of election results and combating misinformation:

"And at the end of the day it came down to judges and election officials doing their jobs and sticking to facts while most GOP leaders kept silent," Tapper said.

US stocks raced higher Tuesday morning, leaving the Dow flirting with the 30,000 level for the first time ever.

The rally comes after the General Services Administration announced Monday evening it is ready to begin the formal transition to the Biden administration. That step should ease lingering investor concerns about a peaceful transfer of power.

Here's how the market opened today:

Markets also started the week on a strong note. The Dow gained 328 points, or 1.1%, Monday on growing vaccine optimism.

Sen. Pat Toomey responded on Tuesday to reports that Janet Yellen will be President-elect Joe Biden's Treasury Secretary. The Pennsylvania Republican wrote in a statement that while he and the former Federal Reserve chair had previously had their "fair share of disagreements," he has "no doubts about her integrity or technical expertise."

Toomey specifically mentioned the legal requirement for CARES Act temporary emergency lending facilities to shut down by the end of the year without further congressional action as something he would like to discuss with Yellen as her nomination is considered.

"While Dr. Yellen and I had our fair share of disagreements during her tenure as chair of the Federal Reserve, I have no doubts about her integrity or technical expertise. As I consider her nomination, I look forward to discussing with her a variety of issues, especially the legal requirement for CARES Act temporary emergency lending facilities to shut down by year-end and remain shut down, absent further congressional action."

He also tweeted about Yellen's nomination:

When the General Services Administration informed President-elect Joe Biden on Monday that the Trump administration is ready to begin the formal transition process, it released a slew of resources for his team to access in the coming weeks.

The now-available resources are enumerated in a "memorandum of understanding" between Biden and the GSA, which also outlined the government resources he was able to use before Administrator Emily Murphy acknowledged his win.

Here's a look at some of those resources:

The House and Senate are out of session this week.

Top Republicans have largely let President Trump lead the way on his decisions regarding the transition and when to move ahead.

For McConnell, the future of his Senate majority rests in Georgia with two runoff elections. Republicans have tread carefully with the fear being that crossing Trump publicly could backfire in a state where the GOP will need to mobilize Trump voters to win.