Yesterday, the GSA informed Biden via a letter from Administrator Emily Murphy that the Trump administration is ready to begin the formal transition process.

The letter was the first step the administration has taken to acknowledge President Trump's defeat, more than two weeks after Biden was declared the winner in the election.

The White House has given formal approval for President-elect Joe Biden to receive the President's Daily Briefing, according to a White House official.

Coordination on when Biden will receive his first briefing is currently underway, but the move is another step toward a transition of power that President Trump held up for weeks after it was clear he lost the 2020 election.

It follows a formal notice by the General Services Administration Monday night that the formal transition of government can proceed.

The President's Daily Briefing, also known as the PDB, is a daily rundown of threats and intelligence developments compiled by the national security community.

The top secret document is read by the president and his inner circle of security advisers and top White House officials and is often accompanied by an in-person briefing by intelligence officials.

The PDB is put together so the commander-in-chief can make timely and sometimes fast-breaking decisions about national security.

Receiving a classified intelligence briefing is typically one of the first rights of a presidential candidate after winning the election. But Biden has yet to receive an intelligence briefing because of Trump's effort to overturn the results of the election, which caused confusion inside the federal government over whether a transition could begin.

President Trump appeared in the Rose Garden Tuesday afternoon for the traditional White House turkey pardon and took the opportunity to take credit again today for the stock market and make a dig at his former defense chief, slightly changing the tone at the typically light-hearted event.

Trump kept his comments short and did not take questions from reporters.

As he pardoned “Cob” and “Corn,” the latter of which was a large, white turkey who made an appearance in the Rose Garden, Trump began his remarks by once again touting that the Dow hit 30,000 today before wishing the crowd a “healthy and very happy Thanksgiving.”

He called Thanksgiving a “special day for turkeys, I guess for the most part probably not very good if you think about it.” But when he shifted to comments on Covid-19, Trump started to use the kind of rhetoric he used on the campaign trail.

Trump also seemed to deviate from his prepared remarks after giving thanks for law enforcement and members of the military, adding, “As I say, America first. Shouldn’t go away from that, America first.”

The President was accompanied by the first lady. Neither wore a mask. His daughter Ivanka Trump and son-in-law Jared Kushner also attended the ceremony with their children, all of whom wore masks.

This was Trump’s second appearance of the day after he gave remarks in the White House briefing room that lasted for just over a minute. He has remained largely out of sight since the election.

He said the head of the transition team reached out to him personally on Monday night.

“This is aligned both once again with the Presidential Transition Act, the White House, and Biden Harris memorandum of understanding between those two organizations and DOD policy,” he said. “We are aligned with our statutory requirements, we are executing our responsibilities under the Presidential Transition Act and our DOD policy. We're looking forward to continuing the process with the Biden Harris transition team in the near future and throughout the transition period.”

Harris said she and President-elect Joe Biden will be walking into the White House with "unprecedented' challenges — namely, tackling the coronavirus pandemic and reopening the nation’s economy.

"Our challenge here is a necessary foundation for restoring and advancing our leadership around the world, and we are ready for that work."
"We will need to re-assemble and renew America's alliances, rebuild and strengthen the national security and foreign policy institutions that keep us safe and advance our nation's interests, and confront and combat the existential threat of climate change that endangers us all," she added.

Harris went on to praise the nominees and appointees, calling them "patriots and public servants to their core," and "the leaders we need to meet the challenges of this moment and those that lie ahead."

Here are some key lines from the nominees' remarks in Delaware:

Blinken said that the US needs to proceed "with equal measures of humility and confidence" in working with other countries because "we can't solve all of the world's problems alone."

"We need to be working with other countries, we need their cooperation. We need their partnership," he said.

Blinken said the US has a "greater ability than any other country on Earth to bring others together to meet challenges of our time."

Mayorkas, who would become the first Latino to helm the department if confirmed, said that the Department of Homeland Security has "a noble mission, to help keep us safe and to advance our proud history as a country of welcome."

Haines, who would become the first woman to lead the US intelligence community, said that Biden knows she has "never shied away from speaking truth to power," adding, "that will be my charge as director of national intelligence."

"I worked for you for a long time and I accept this nomination knowing that you would never want me to do otherwise and that you value the perspective of the intelligence community and that you will do so even when what I have to say may be inconvenient or difficult, and I assure you, there will be those times."

Thomas-Greenfield, who has worked for 35 years in foreign service across four continents, said she likes to put a "cajun spin" on diplomacy.

"I called it gumbo diplomacy. Wherever I was posted around the world, I'd invite people of different backgrounds and beliefs to help me make a roux, chop onions for the holy trinity, and make homemade gumbo."

She added: "It was my way of breaking down barriers, connecting with people, and starting to see each other on a human level."

Sullivan noted that he served as Biden's national security adviser when he was vice president.

"I learned a lot about a lot, about diplomacy, about strategy, about policy. Most importantly about human nature. I watched him pair strength and resolve with humanity and empathy."

On Biden, he added, "That is the person America elected. That's also America at its best."

Kerry said that in the fight against climate change "failure is not an option."

"Succeeding together means tapping into the best of American ingenuity, creativity, diplomacy, from brain power to alternative energy power, using every tool we have to get where we have to go," he said.

He has selected Avril Haines, the first woman to lead the US intelligence community, and Alejandro Mayorkas, the first Latino to helm the Department of Homeland Security.

Cuban-born Mayorkas, a former deputy secretary of DHS who Biden has nominated to lead the department, will be tasked with rebuilding an agency that carried out some of the most draconian measures associated with President Trump's hardline immigration policy, including family separations at the US-Mexico border.

"My father and mother brought me to this country to escape communism," Mayorkas said at Biden's announcement in Delaware. "They cherished our democracy and were intensely proud to become United States citizens as was I. I have carried that pride throughout my nearly 20 years of government service and throughout my life. My parents are not here to see this day. Mr. President-elect, Madam Vice president-elect, please know I will work day and night in the service of our nation to ably lead men and women of the United States Department of Homeland Security. And to bring honor to my parents and of the trust you placed in me to carry vision for our country forward."

"If afforded the opportunities to do so, I will never forget that my role on this team is unique. Better than that of a policy adviser, I will represent to you, Congress, and the American public, the patriots that comprise our intelligence community. Mr. President-Elect, you know that I have never shied away from speaking truth to power and that will be my charge as director of national intelligence," Haines said.

Here's who else has been tapped to serve in Biden's Cabinet: 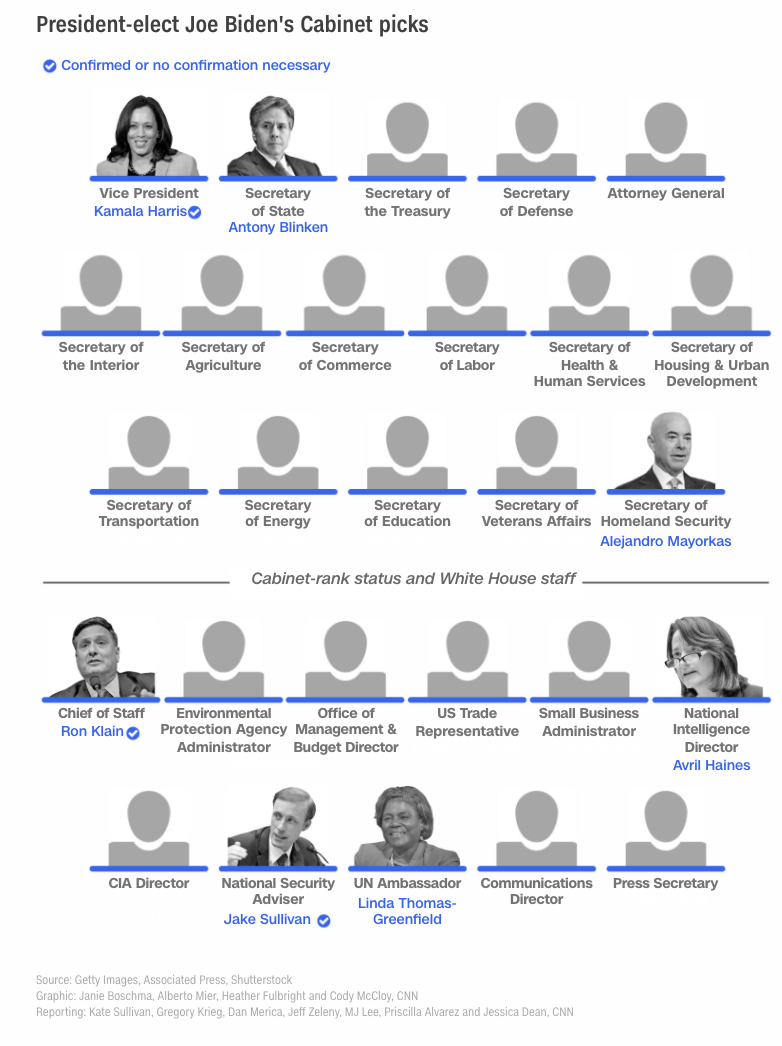 President-elect Joe Biden is introducing his Cabinet nominees and appointees to key national security and foreign policy posts, including the first woman to lead the US intelligence community and first Latino to helm the Department of Homeland Security.

The six foreign policy and national security nominees and appointees, which were unveiled yesterday, are on stage with him in Wilmington, Delaware.

"Today, I'm pleased to announce nominations and staff for critical foreign policy and nation security positions in my administration. It is a team that will keep our country and our people safe and secure. And it is a team that reflects the fact that America is back. Ready to lead the world, not retreat from it," Biden said.

"The team meets this moment, this team behind me. They embody my core beliefs that America is strongest when it works with its allies," Biden continued. "Collectively this team has secured some of the most defining national security and diplomatic achievements in recent memory."

Vice President-elect Kamala Harris also praised the individuals, saying they are the leaders the country needs "to meet the challenges of this moment."

"I have always believed in the nobility of public service, and these Americans embody it," Kamala Harris said. "These women and men are patriots and public servants to their core. And they are leaders, the leaders we need to meet the challenges of this moment. And those that lie ahead."

The nominees and appointees include:

President Trump, joined by Vice President Mike Pence, abruptly came into the White House briefing room Tuesday for remarks scheduled minutes before on the stock market that clocked in just over one minute.

The Dow hit 30,000 for the first time earlier Tuesday as uncertainty about the outcome of the presidential election lifted and new hopes that a Covid-19 vaccine could soon be available.

The President made brief remarks and did not take any questions.

Here's what the President said:

"I just want to congratulate everybody. The stock market, Dow Jones Industrial Average, just hit 30,000, which is the highest in history. We've never broken 30,000, and that's just, despite everything that's taken place with the pandemic.
I'm very thrilled with what's happened on the vaccine front, that's been absolutely incredible. Nothing like that has ever happened, medically, and I think people are acknowledging that, and it's having a big effect.
But the stock market's just broken 30,000, never been broken that number. That’s a sacred number 30,000, nobody thought they'd ever see it. That's the ninth time since the beginning of 2020. And it's the 48th time that we've broken records in, during the Trump administration.
And I just want to congratulate all the people within the administration that work so hard. And most importantly, I want to congratulate the people of our country, because there are no people like you. Thank you very much, everybody. Thank you."