As President Biden touted the need to invest in energy efficiency during his State of the Union address, he said his clean energy legislative agenda would cut energy costs for American families an average of $500 a year by combating climate change.

Facts first: This needs context. Biden’s estimate is based on third party analysis that assessed the savings Americans might see by 2030, not immediately.

Biden’s $500 per year figure comes from a recent report done by the nonpartisan research firm Rhodium Group – which analyzed how much greenhouse gas emissions the US could slash by passing major clean energy legislation, putting forth new federal regulations, and having states pass new climate and clean energy bills as well.

Rhodium’s report also looked at how this would impact household energy costs; it stresses that clean energy tax credits would have the biggest impact on potential household savings because they would help bring down the costs of items such as clean electricity and electric vehicles.

“Long-term tax credits, investments in energy efficiency and other factors cushion consumers from price increases associated with new standards and regulations,” the Rhodium report reads. “On a national average basis, households save roughly $500 a year in energy costs in 2030 in our joint action scenario.”

As it notes, Americans wouldn’t expect to see energy costs go down by $500 per year immediately. Rhodium estimates that would happen by the end of the decade, with savings building gradually if Congress passed a major clean energy bill.

Sen. Elizabeth Warren, a Democrat from Massachusetts, labeled President Biden's economic message as being "exactly where it should be."

Warren — among the Democrats who challenged Biden for the party's presidential nomination in 2020 — also responded to a question centered around Biden's Build Back Better agenda and the reconciliation bill, saying, "We just have to fish or cut bait on reconciliation, enough of this."

"We're not going to get what any one person wanted," Warren continued. "But there's so much that we all agree on that we ought to be able to get a deal, get it together and get it done. It's time."

Sen. Mitt Romney, a Republican from Utah, added that he thought Biden did a "very nice job on Ukraine, showed our full commitment to defending our allies and standing with the people of Ukraine."

Sen. Brian Schatz, a Democrat from Hawaii, told CNN that State of the Union is always "a challenge for a President because the President has to describe their agenda and it's not just one or two things."

He added that "most of the members in the chamber behaved reasonably well."

Key swing vote Sen. Joe Manchin, Democrat from West Virginia, criticized Biden for calling for passage of a laundry list of items from the Build Back Better bill that the West Virginia Democrat blocked after months of negotiations.

Asked by CNN if he was surprised by the inclusion of so many items in the State of the Union address, Manchin said, “No, not really. They just can’t help themselves.”

Asked if the he still considers the bill dead, Manchin replied, “There might be parts they want to talk about. I don’t know. That was just too far.”

And when he was asked about whether Biden appropriately addressed inflation concerns in the speech – that was a key reason Manchin never signed onto Build Back Better — the senator said, “Inflation is the biggest thing on my mind in West Virginia….I’ve never found you lower costs by spending money.”

President Biden spoke for 62 minutes during his first State of the Union address.

The economy took up the bulk of his speech.

Here is a breakdown for each topic Biden addressed during his speech:

For a visual representation of how the President spent his time, see the pie chart below: 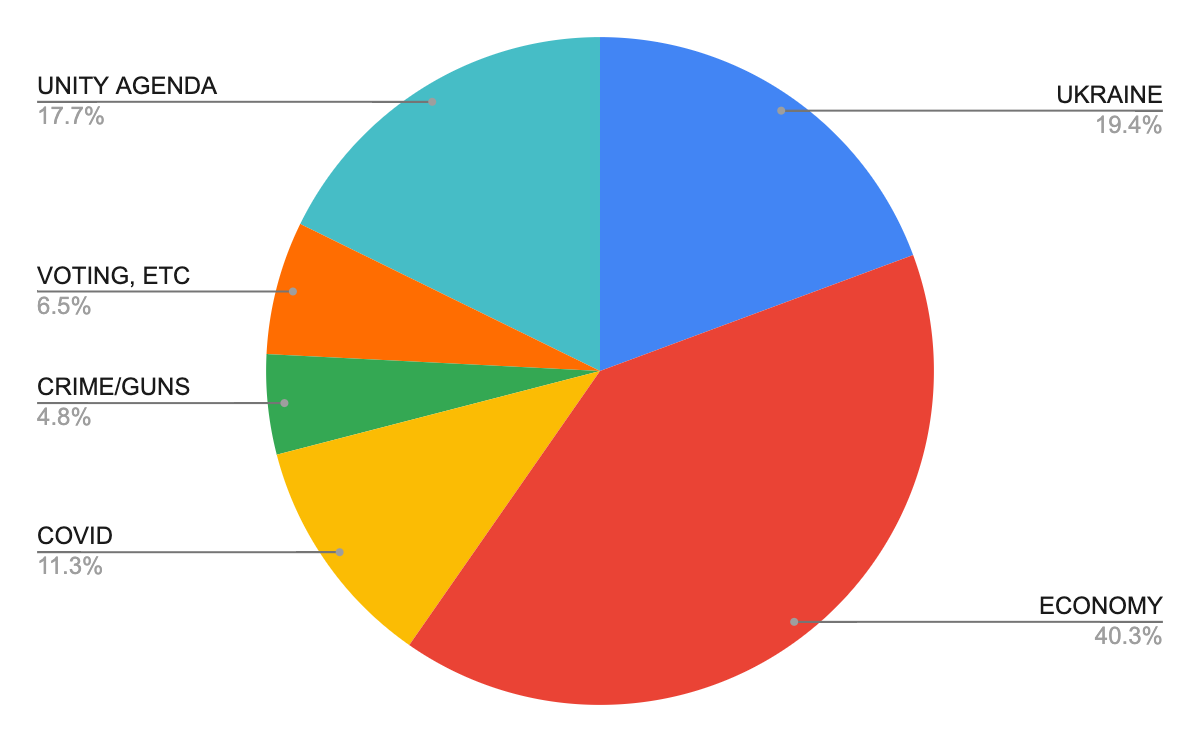 President Biden said the US economy had its strongest year in nearly four decades in 2021, growing at a rate of 5.7%.

Facts first: That is correct. But it also needs some more context because the economy is still recovering from the devastating impact of the pandemic.

The US economy was strong last year. The nation’s gross domestic product, the broadest measure of economic activity, increased at a pace of 5.7%, according to the Bureau of Economic Analysis. That was the fastest growth rate since 1984, when Ronald Reagan was in the White House.

That said, America is also still recovering from the worst of the pandemic. In 2020, GDP contracted as a result of the economy shutting down in response to Covid-19. Last year’s upswing was still making up for lost ground.

But the economic growth came at a price: inflation has soared, and Americans face higher prices everywhere from food to gasoline to furniture. At the start of 2022, two of the most-watched inflation indicators — the Labor Department's consumer price index and the Commerce Department's personal consumption expenditure price index — increased at the fastest pace since 1982 during the year ending in January.

During his speech, President Biden touted his Supreme Court nominee, Judge Ketanji Brown Jackson, and claimed that her appointment has been embraced by a bipartisan array of interest groups and legal experts.

“Since she’s been nominated, she’s received a broad range of support, from the Fraternal Order of Police, to former judges appointed by Democrats and Republicans,” Biden said.

Facts First: This is correct.

Jackson, who is the first Black woman nominated to the Supreme Court, comes from a law enforcement family. Her brother was a detective in Baltimore and two of her uncles were police officers, including one who was the police chief in Jackson’s hometown of Miami.

Fraternal Order of Police National President Patrick Yoes issued a statement saying Jackson “has the temperament, intellect, legal experience, and family background to have earned this appointment” and will be a fair justice on the high court. This was a surprising endorsement, as the group endorsed former President Trump in 2020 and the group’s vice president recently slammed Biden for “demonizing” police officers.

Biden also accurately pointed out that Jackson has support from some retired GOP-appointed judges. This includes Judge J. Michael Luttig, who served in the Virginia-based federal appeals court for 15 years and informally advised former Vice President Mike Pence regarding Jan. 6. And according to Axios, Jackson is also supported by former Judge Thomas R. Griffith, who was an influential conservative voice on the DC Circuit Court of Appeals from 2005 until his retirement in 2020.

But there are limits to the bipartisan support for Jackson’s nomination. Some Senate Republicans have criticized her record and the Republican National Committee called her a “radical, left-wing activist.”

Gov. Kim Reynolds, a Republican from Iowa, said that she encourages President Biden "to put his faith" in the American people.

While delivering the GOP response to the State of the Union address, Reynolds said that Americans "have never wavered" their "belief in this country regardless of who leads it" because "the soul of America isn't about who lives in the White House."

"It's men and women like you in every corner of this nation who are willing to step up and take responsibility for your communities, for your neighbors, and ultimately for yourselves. By that most important measure at least, the state of our union is indeed strong," she concluded.

"Well, the American people share that view. Enough is enough. It's not just with DC spending. Americans are tired of a political class trying to remake this country into a place where an elite few tell everyone else what they can and cannot say," she said.

Reynolds said Americans "are tired of the theater where politicians do one thing when the cameras are rolling and another when they believe you can't see them."

Gov. Kim Reynolds, a Republican from Iowa, is delivering the GOP response to President Biden's State of the Union address.

"I listened as the governor of our state, as a mom, and a grandmother of 11, who is worried our country is on the wrong track," she began her speech.

"We're now one year into his presidency, and instead of moving America forward, it feels like President Biden and his party have sent us back in time to the late '70s and early '80s when runaway inflation was hammering families, a violent crime wave was crashing our cities, and the Soviet army was trying to redraw the world map."

President Biden said the pandemic disrupted global supply chains and in turn boosted inflation. A third of last year’s inflation was due to higher car prices, he said.

As of January, inflation for used and new vehicles made up nearly a third of overall price increases.

The Labor Department’s consumer price index rose by 7.5% in the 12 months ended in January. Prices for used cars contributed roughly 1.7 percentage points of that, while new vehicles added another half percentage point.