Our live coverage has ended for the day. You can read more about Biden's infrastructure plan here.

President Biden expressed an openness to listen to ideas on how to pay for his American Jobs Plan on Wednesday, but stressed that the time to act is now on his sweeping infrastructure and jobs proposal.

“Let me be clear, these are my ideas on how to pay for this plan. If others have additional ideas, let ‘em come forward. I'm open to other ideas so long as they do not impose any tax increase on people making less than $400,000 dollars,” Biden said after laying out his proposed changes to the corporate tax code.

Biden said he plans raise the cooperate tax rate to 28% up from 21%.

“No one should be able to complain about that. It's still lower than what that rate was between World War II and 2017. Just doing that one thing will generate $1 trillion in additional revenue over 15 years,” he said.

He said the plan will also establish a global minimum tax for cooperation’s and eliminate deductions corporations currently receive for offshoring jobs.

“All this adds up to more than what I proposed to spend in just 15 years. It's honest. It's fiscally responsible, and by the way, as the experts will tell you, it reduces the debt,” Biden said.

He called on Republicans to come together in a bipartisan effort to pass the infrastructure bill, though they have spoken out against raising taxes in the past.

President Biden called for bipartisan support for his $2 trillion infrastructure plan during his remarks in Pittsburgh, Pennsylvania.

Biden cited how in the past, Republican presidents have pushed through major infrastructure plans in a bipartisan matter from Abraham Lincoln to Dwight Eisenhower.

"I don't think you'll find a Republican today, in the House or Senate, maybe I'm wrong, gentlemen, who doesn't think we don't have to improve our infrastructure. They know China and other countries are eating our lunch. So there's no reason why it can't be bipartisan again," Biden said.

“The divisions of the moment shouldn't stop us from doing the right thing for the future. I’m going to bring Republicans into the Oval Office, listen to them, what they have to say, and be open to other ideas. We’ll have a good faith negotiation with every Republican wants to help get this done. But we have to get it done,” Biden added.

“I spoke to the Majority Leader, no longer, I guess he's no longer the majority leader,” Biden said Wednesday. “He has been for a long time. I spoke for, I spoke to the Republican leader about the plan. Everybody's for doing something about infrastructure. Why haven’t we done it? Well, no one wants to pay for it.”

The reaction from environmental groups and climate policy experts to the unveiling of President Biden’s new infrastructure plan was mostly positive, but some advocates say the plan does not meet the urgency of the current climate crisis.

Jesse Jenkins, an assistant professor at Princeton University who studies energy systems and policy, told CNN the plan has the potential to have a transformative impact on accelerating the transition to a clean energy economy.

The transportation sector is the largest contributor of greenhouse gas emissions in the US economy, according to EPA data. Jenkins said the $174 billion investment in the plan to advance electric vehicle technology, offer rebates and tax incentives to EV buyers and built out a network of 500,000 charging stations could go a long way towards reducing emissions in the US and creating jobs.

“In the near term, it looks like there's sufficient funding here to subsidize the purchase price [of a new electric vehicle] so that when you go to the dealership, it's just a better, cheaper car. And that can, along with investments in manufacturing, drive a revitalization of US automaking,” Jenkins said.

The nonprofit Environmental Defense Fund (EDF) also pointed to the transportation investments as a significant step towards decarbonizing the economy and protecting American jobs.

“President Biden’s bold action to invest in clean transportation is one of the biggest steps we can take to move America forward,” said EDF president Fred Krupp in a statement. “With this plan, President Biden is standing up for U.S. workers by making the investments we need to win the jobs of the future.”

Others green groups, who had viewed this infrastructure plan as the biggest and best opportunity to pass climate legislation in a Senate with a razor-thin Democratic majority, expressed disappointment at the scope of the plan.

The youth-led climate advocacy group Sunrise Movement, which helped to create the Green New Deal and has called for an investment of at least $1 trillion each year for the next decade to address climate change, said Biden’s plan is a “start.”

“The priorities and approach are right — this contains the frameworks of the Green New Deal — but as of now this plan could only be considered a beginning of that truly transformative vision,” said Varshini Prakash, the Sunrise Movement’s executive director

And the Center for Biological Diversity – a nonprofit focused on conservation issues – said Biden’s plan “squanders one of our last, best chances to stop the climate emergency.”

“Instead of a Marshall Plan approach that moves our economy to renewable energy, it includes gimmicky subsidies for carbon capture, fantastically wishes the free market will save us, and fails to take crucial and ambitious steps toward phasing out fossil fuels,” said Brett Hartl, the center’s government affairs director, in a statement.

President Biden said he will prioritize investing in American-based companies, products and workers through contracts in the American Jobs Plan.

"When we make all of these investments, we're going to make sure, as the executive order I signed early on, that we buy American," Biden said during his remarks on the $2 trillion proposal.

Biden noted that the investments will reach minority communities who have historically been left out as well.

"Not a contract will go out, that I control, that will not go to a company that is an American company, with American products all the way down the line and American workers. And we'll buy the goods we need from all of America, communities historically that have been left out of these investment, Black, Latino, Asian American, Native American, rural, small businesses, entrepreneurs across the country," Biden explained.

President Biden is laying out a roughly $2 trillion plan – dubbed the American Jobs Plan – designed to improve US infrastructure and shift to greener energy over the next eight years.

"The American jobs plan will modernize 20,000 miles of highway, roads and main streets that are in difficult, difficult shape right now," Biden said in a speech today in Pittsburgh, Pennsylvania.

"It will fix the nation's 10 most economically significant bridges in America that require replacement. Remember that bridge that went down? We've got ten most economically significant bridges with more commerce going across it that need to be replaced. We'll also repair 10,000 bridges, desperately needed upgrades to unclog traffic, keep people safe and connect our cities, towns and tribes across the country," he said

Biden explained his plan will build new rail cars and transit lines to cut both congestion and pollution and it would invest in communities, connecting them to cities with more job opportunities.

You can read a full break down of his plan here.

President Biden touted his massive infrastructure proposal in remarks today, saying it is "a once-in-a-generation investment in America" and "the largest American jobs investment since World War II."

"Today, I'm proposing a plan for the nation that rewards work, not just rewards wealth. It builds a fair economy that gives everybody a chance to succeed," Biden said in a speech in Pittsburgh, Pennsylvania.

"And it's going to create the strongest, most resilient innovative economy in the world. It's not a plan that tinkers around the edges. It's a once-in-a-generation investment in America, unlike anything we've seen or done since we built the interstate highway system and the space race decades ago."

Biden acknowledged that his plan is "big" and "bold," and said he's confident the country can "get it done." The President noted that the plan has two parts to it: The American Jobs Plan and the American Families Plan.

"Both are essential to our economic future," he said.

The President focused his remarks today on the first part of the plan, a roughly $2 trillion proposal which aims to improved the nation's infrastructure and shift to greener energy over the next eight years. He said he would talk about the other part of the package in "a few weeks."

"But today I want to talk about the American jobs plan. I'll begin with the heart of the plan. It modernizes transportation infrastructure. Our roads, our bridges, our airports," Biden said.

"It grows the economy in key ways. It puts people to work to repair and upgrade that we badly need. It makes it easier and more efficient to move goods, to get to work, and to make us more competitive around the world," he continued. 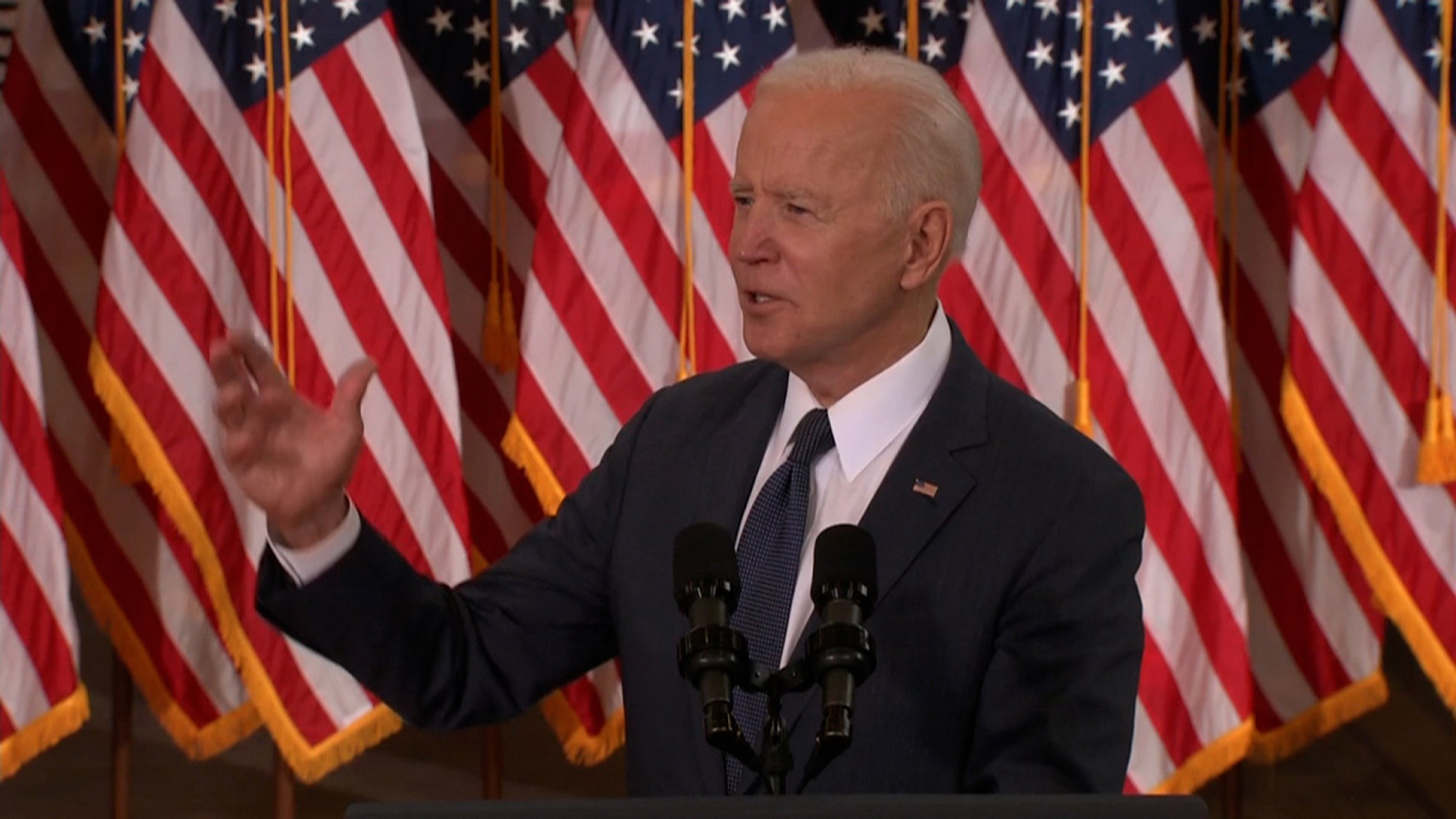 President Biden laid out his $2 trillion infrastructure proposal during his remarks in Pittsburgh, Pennsylvania, and addressed concerns about taxing top earners to pay for it.

"This is not to target those who've made it, not to seek retribution. This is about opening opportunities for everybody else," Biden said.

"And here's the truth, we all will do better when we all do well. It's time to build our economy from the bottom up, and from the middle out. Not the top down. It hadn't worked very well. For the economy, overall, it hadn't worked because Wall Street didn't build this country. You, the great middle country built this country, and unions built the middle class, and it's time — this time we'll rebuild the middle class, we're going to bring everybody along, " he said.

Some more background: Biden plans to pay for his proposal by raising corporate taxes and eliminating tax breaks for fossil fuels, which was one of his core campaign promises. The White House says this tax hike would raise more than $2 trillion over the next 15 years.

President Biden is laying out his next big proposal in a speech in Pittsburgh, Pennsylvania. The roughly $2 trillion plan aims to improve US infrastructure and shift to greener energy over the next eight years.

"Today, I'm proposing a plan for the nation that rewards work, not just rewards wealth. It builds a fair economy that gives everybody a chance to succeed," Biden said in his remarks. "And it's going to create the strongest, most resilient innovative economy in the world. It's not a plan that tinkers around the edges. It's a once-in-a-generation investment in America."

The infrastructure spending plan is the first of a two-part proposal to help the nation's economy recover from the coronavirus pandemic. The President is expected to unveil his package focusing on the "care economy," including investments in education and child care, in coming weeks.

Here are some key things we know are in Biden's infrastructure proposal, according to the White House:

When Jean-Pierre was asked during a gaggle aboard Air Force One if Biden has a timeframe to get infrastructure passed, she said, “With this one, you know, it’s going to take some time.”

“And we’re willing to, like, go with the process, and have those conversations on the Hill, which we’re already having. We’ve already been having those conversations with Republicans and Democrats. And so, we’re just going to see how this goes. But he is zeroed in, laser focused on this plan. That’s what you’re going to hear – hear him talk more on this later today,” she added.

On Tuesday, a senior administration official told CNN that the President was aiming to pass his infrastructure proposal through Congress by this summer