The inauguration of Joe Biden

Our live coverage has ended. Read and watch below to see how the day unfolded.

Republican Rep. Kevin McCarthy said that he listened to President Joe Biden's inaugural address about tension and division in the country and that he looked forward to "go forth from here together."

"We should also remember that this is not the end, but just the beginning. As leaders, we are judged not by our words, but by our actions. So let's go forth from here together, accomplish great things for the American people. And every time you look at this photo, remember the beginning of the job we have to do," he said.

McCarthy presented President Biden and Vice President Kamala Harris with a photo from the inauguration ceremony.

"Our task as leaders is to bind this nation's wounds and dedicate ourselves to the values of all Americans shared together. With modern technology just a few minutes ago, it captured in these pictures, history in the making for all the world to see. This picture should serve as a reminder of that task that we have before us," he said.

Some background: Republican representatives said that McCarthy was supportive of their plans to oppose the electoral college count and object to certifying President Biden's win earlier this month.

This was a stark contrast from the position of many prominent Republicans — including Senate Majority Leader Mitch McConnell, Wyoming Rep. Liz Cheney and the former House speaker, Paul Ryan – who publicly and privately raised major concerns about an effort that is doomed to fail but is bound to sow distrust over the sanctity of US elections. 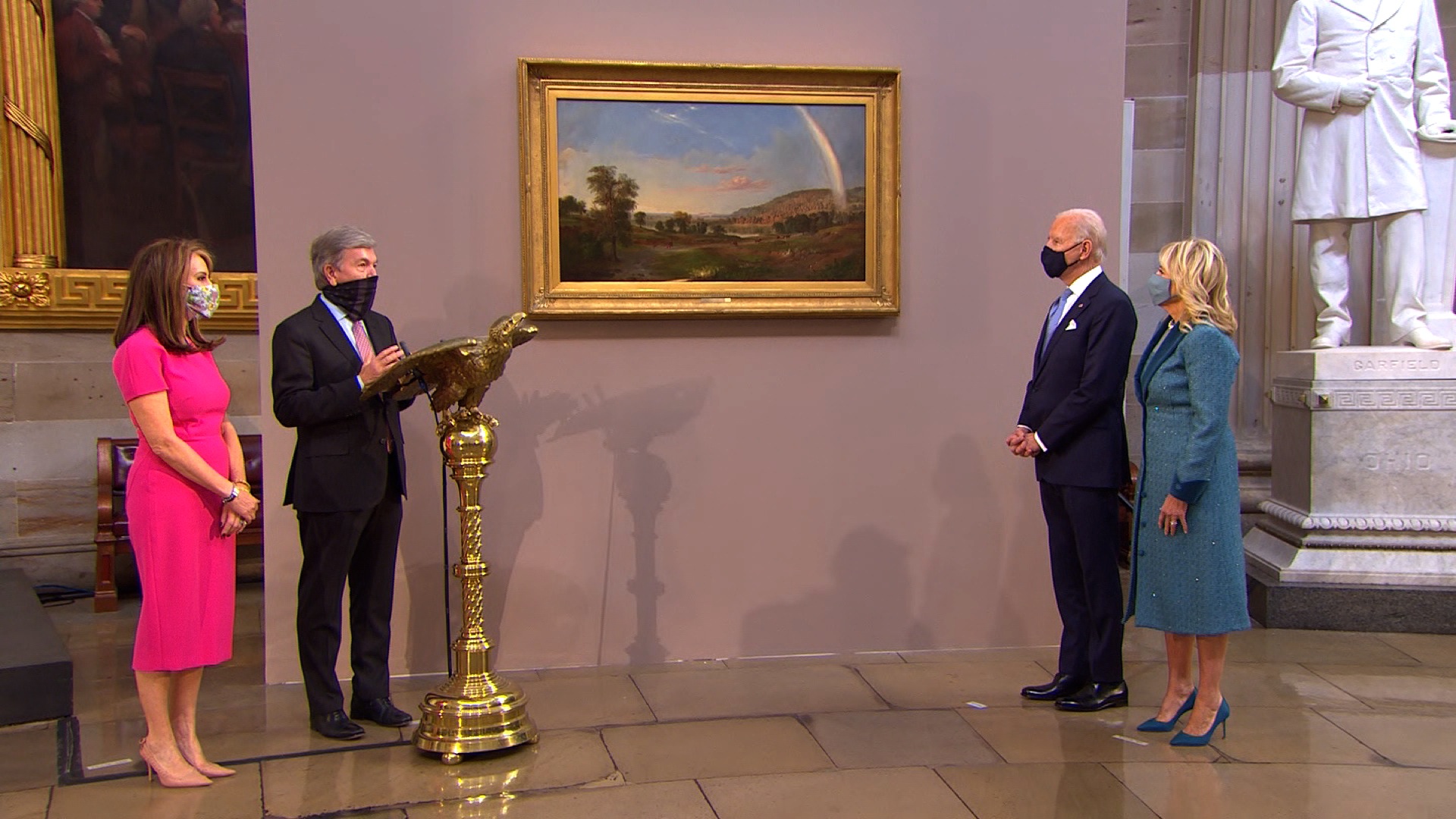 Sen. Amy Klobuchar presented Biden and Harris with Lenox crystal vases. The company is based in Pennsylvania, Biden's home state.

McConnell took a moment to also offer a few encouraging remarks to both Biden and Harris, noting how both are not only a son and daughter of the Senate, but that they both managed to skip serving the House altogether. A humorous remark that garnered laugh and applause from those in attendance.

"It's my honor and privilege to help present these flags of our nation that were flown over today's event here at the Capitol," McConnell said.

"The Star Spangled Banner is our greatest symbol of endurance of the American idea. It flies over this building on triumphant days and tragic ones. For all factions and all parties. And today, this flag flew over our former colleagues inauguration as the very first female Vice President of the United States to our very distinguished colleague, Madam Vice President, please accept this flag with the highest compliments and congratulations of the United States Senate," he said.

Pelosi presented Biden with the same flag that was flown when he was sworn in. "It's my privilege to extend the flag flown the moment, the early moment that you were sworn in as President of the United States."

GOP Rep. Kevin McCarthy, who had supported efforts to challenge the election outcome, and Democratic Rep. Steny Hoyer welcomed Biden and Harris and presented them with framed photographs of their swearing-in ceremonies.

"Today, Vice President Harris made history and all America should celebrate that. But, we should also remember that this is not the end but just the beginning. As leaders, we're judged not by our words but by our actions. So, let's go forth from here together, accomplish great things for the American people and every time you look at this photo, remember the beginning of the job we have to do. Congratulations," McCarthy said.

French President Emmanuel Macron has tweeted President Joe Biden and Vice President Kamala Harris welcoming the United States back into the Paris climate agreement, a landmark agreement aimed at protecting the planet from the impacts of the climate crisis.

"We are together. We will be stronger to face the challenges of our time. Stronger to build our future. Stronger to protect our planet. Welcome back to the Paris Agreement," Macron said.

"Best wishes on this most significant day for the American people," his message also said.

President Biden will sign a slate of executive actions in the Oval Office later on Wednesday, including rejoining the Paris Agreement. He will sign a notice that will be sent to the United Nations later today.

The United States will officially become party to the agreement in 30 days.

Before leaving office, former President Trump signed a memorandum extending US Secret Service protection by six months for all his children, according to a senior US official.

Typically the protection applies to children up to age 16 but by signing the memorandum, the US Secret Service will be able to provide protection to all his children.

President Biden will sign three documents while in the President's Room at the Capitol.

These are the documents he's singing:

Following this signing ceremony, Biden, hosted by the Commander of Joint Task Force-National Capital Region, will review the readiness of military troops on the East front of the Capitol. Every branch of the military will be represented in this event.

Biden will then travel to Arlington National Cemetery for a wreath-laying ceremony at the Tomb of the Unknown Soldier. The Bidens will be joined by former presidents Barack Obama, George W. Bush and Bill Clinton and former first ladies Michelle Obama, Laura Bush and Hillary Clinton.

Many Republican lawmakers are praising President Biden’s speech and his handling of the transition – including the GOP senators whom Biden will need to advance his agenda.

Sen. Lisa Murkowksi said Biden’s remarks were well done and “what we needed.”

Sen. Susan Collins said Biden “struck the right themes of unity, a call for us to come together to stop viewing one another as adversaries but rather as fellow Americans,” and she stands “ready to work with him (Biden) to advance common goals.”

The whitehouse.gov website has been updated to reflect Joe Biden is the new President. It now also includes a Spanish language version of the White House’s communications.

You can view the archived White House website for now former US President Trump here.

There are obvious differences between President Biden and Vice President Harris (race and gender), but it’s really worth thinking how different they are in terms of their political background.

Biden has waited forever for this moment. He first ran for president more than 30 years ago. He was first elected to the Senate nearly 50 years ago.

Harris’ trek to the vice presidency was much shorter in political life. She was elected attorney general of California only 10 years ago. Harris came to the Senate just four years ago.

It’s one of the most lopsided differences in favor of the president in terms of electoral experience for any president and vice president.

Usually, presidents choose vice presidents who have more experience than they do (e.g. Trump and Pence or Obama and Biden).

You probably have to go all the way back to the Nixon/Agnew administration to see an instance of a president having so much more elected experience than the vice resident.

It’ll be interesting to see how this dynamic plays out this time around.

President Joe Biden tweeted from the @POTUS account for the first time following the inauguration ceremony, writing: "There is no time to waste when it comes to tackling the crises we face."

He continued: "That's why today, I am heading to the Oval Office to get right to work delivering bold action and immediate relief for American families."