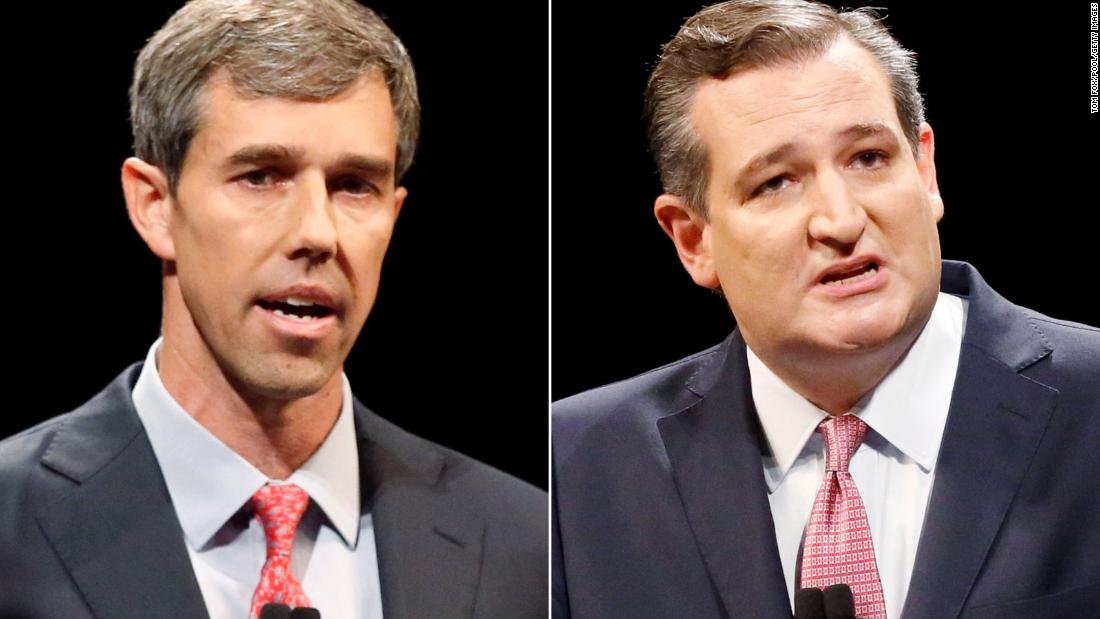 A new CNN poll, released Tuesday and conducted by SSRS, shows Cruz is well-positioned for re-election over O'Rourke.

The Republican is topping O'Rourke 52% to 45% among likely voters. 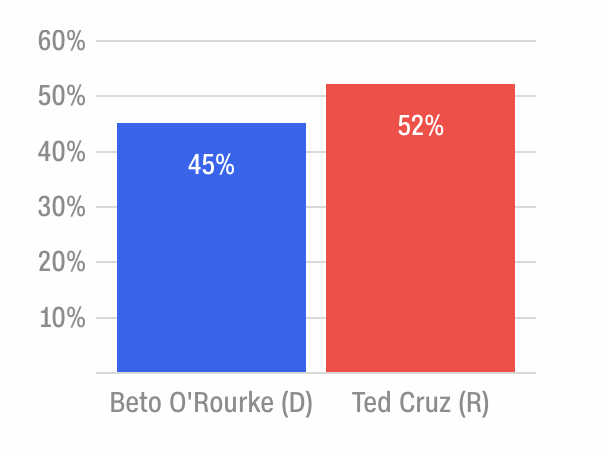 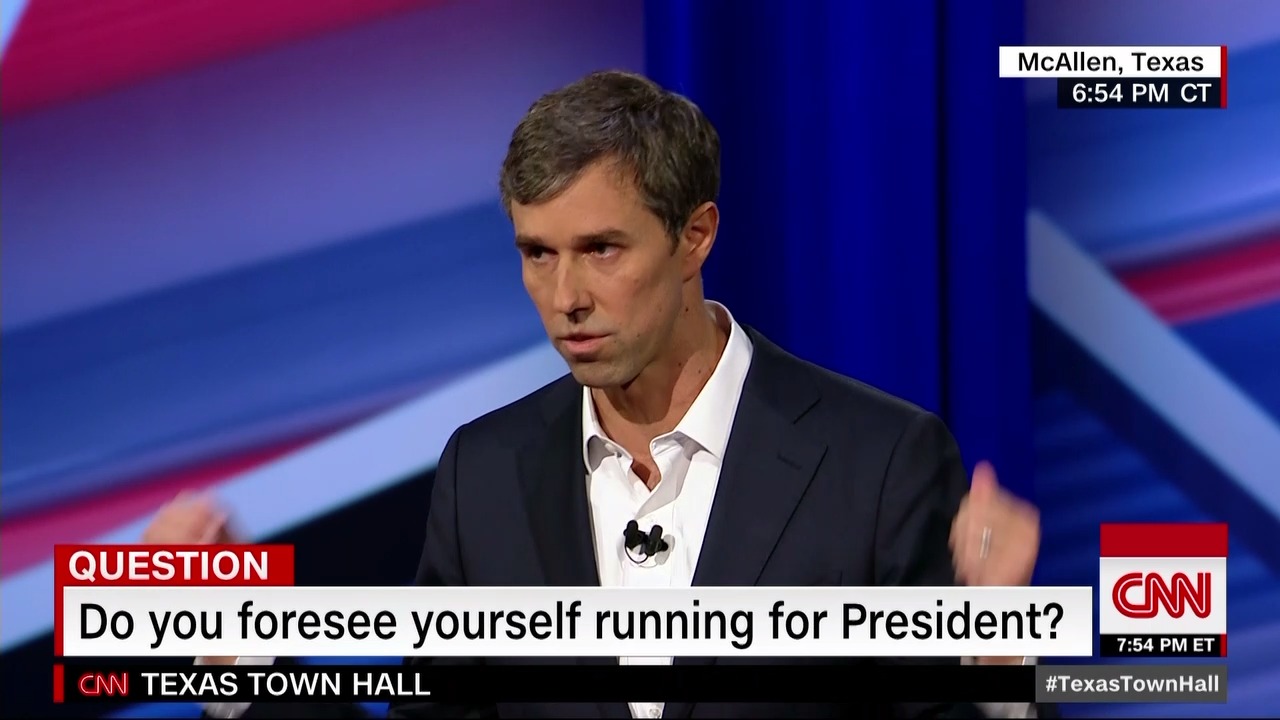 Rep. Beto O'Rourke was asked by a member of the audience at CNN's town hall tonight if he imagined himself one day running for president.

He said no, citing his young kids.

"The answer is no," O'Rourke said, pointing out his wife in the audience -- "the only one to clap during that."

"Our children are 11, they're 10, and 7 years old. We've told them we're going to take these almost two years out of our life to run this race, and then we're devoted and committed to being a family again."

CNN's Dana Bash followed up: "Is that a definitive no?"

"It's a definitive no," O'Rourke replied.

"Let me put it this way," O'Rourke said. "I promise to you and most importantly to the people of Texas, I'll serve every single day of a six-year term in the United States senate and I won't leave this state to run for president."

"And if you don't win?" Bash pressed. 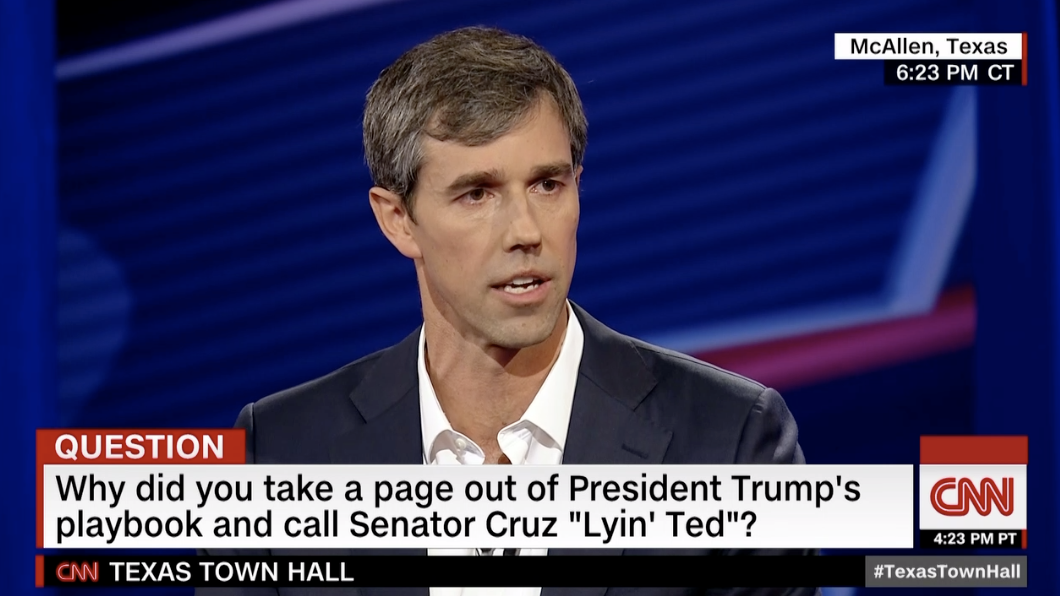 Beto O’Rourke suggested he regrets calling Ted Cruz “Lying Ted” during a debate Tuesday night. “It’s not something that I feel totally comfortable with, and perhaps in the heat of the moment I took a step too far,” O’Rourke said.

Asked by CNN’s Dana Bash if he regrets picking up on President Donald Trump’s nickname for Cruz, he said: “I don’t know that that’s the way that I want to be talking in this campaign."

During their Tuesday night debate, O’Rourke had shot back after a Cruz attack over a vote on an oil tax, “It's why the President called him 'Lying Ted,' and it's why the nickname stuck -- because it's true.”

Explaining that quip at Thursday night’s town hall, O’Rourke said the decision came in the heat of the moment near the beginning of their second debate, after he felt Cruz had been dishonest about O’Rourke’s record in their first debate.

“I decided that, you could spend the rest of the debate responding to every single dishonest thing that he’d said, or I could make sure that everyone understands what he’s doing,” O’Rourke said. 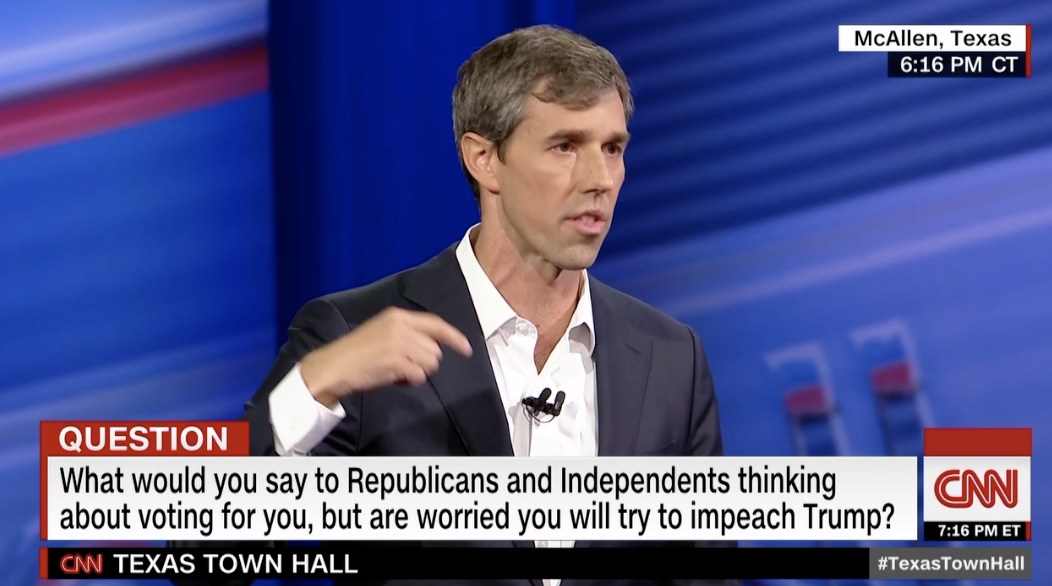 Asked by CNN’s Dana Bash if he’s changed his mind after saying he’d vote to impeach Trump this summer, O’Rourke said, “I haven’t.”

He pointed to the ongoing probe into whether Trump’s 2016 campaign colluded with Russia.

“I would liken impeachment to an indictment. There is enough there to proceed to a trial,” he said.

O'Rourke continued: “I would not prejudge the outcome of that trial. All I am saying is, there’s enough there. … I know that this is not politically easy or convenient to talk about, but 242 years into this experiment … nothing guarantees us a 243rd or a 244th.”

O'Rourke has avoided the topic recently, even as Republican Sen. Ted Cruz lambasted him in Tuesday night's Senate debate on the topic, casting O'Rourke as too liberal for Texas. 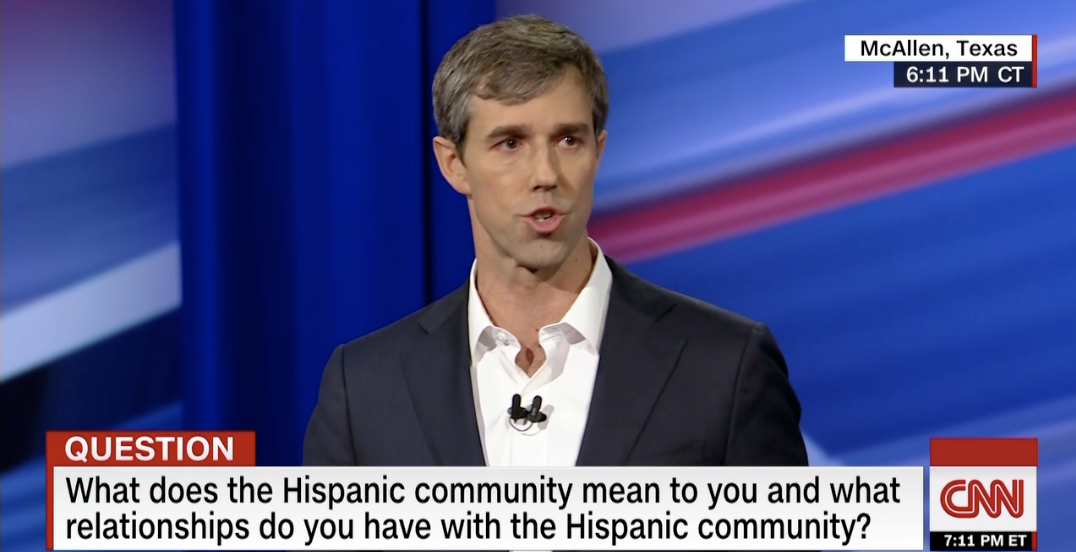 Beto O’Rourke explained why -- despite being born Robert Francis O’Rourke -- he goes by “Beto,” a nickname that led Donald Trump Jr. to call O’Rourke an "an Irish guy pretending to be Hispanic."

Pointing to his upbringing in El Paso, a community he said is 80% Mexican-American, he said “Beto” is a common nickname for anyone with his name. 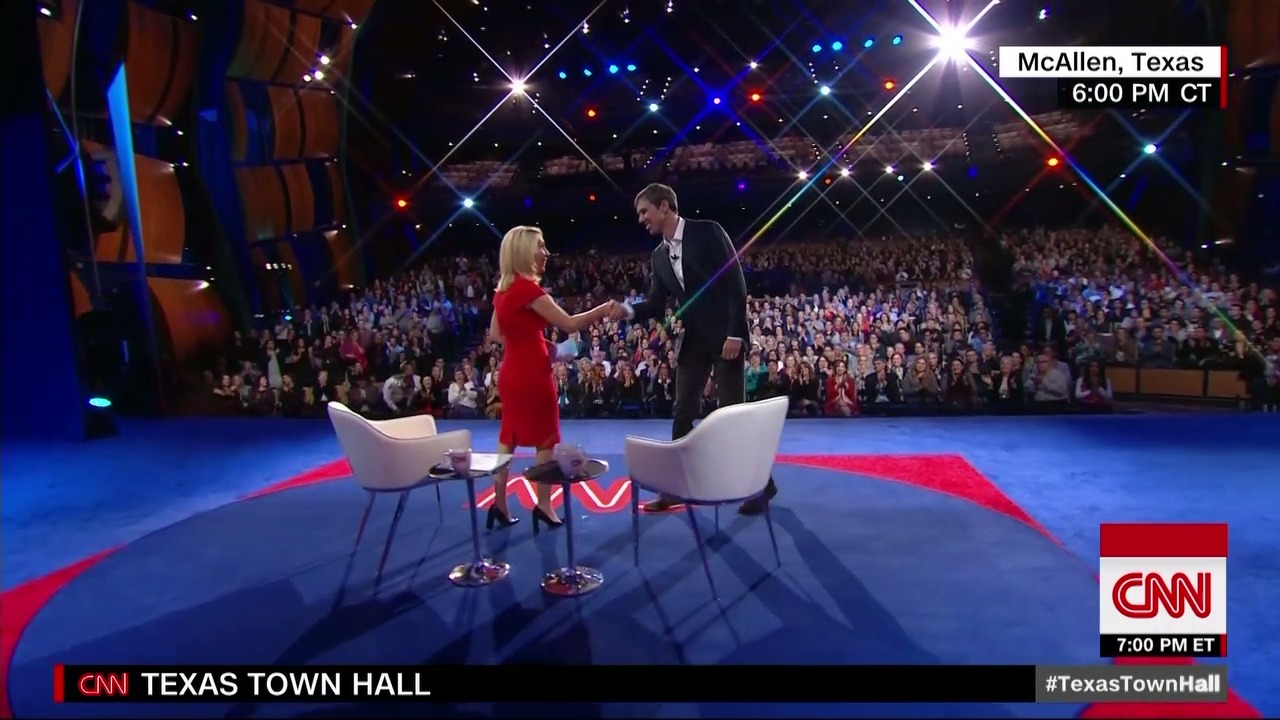 You can watch it live in the video player above. We'll bring you the key moments here. 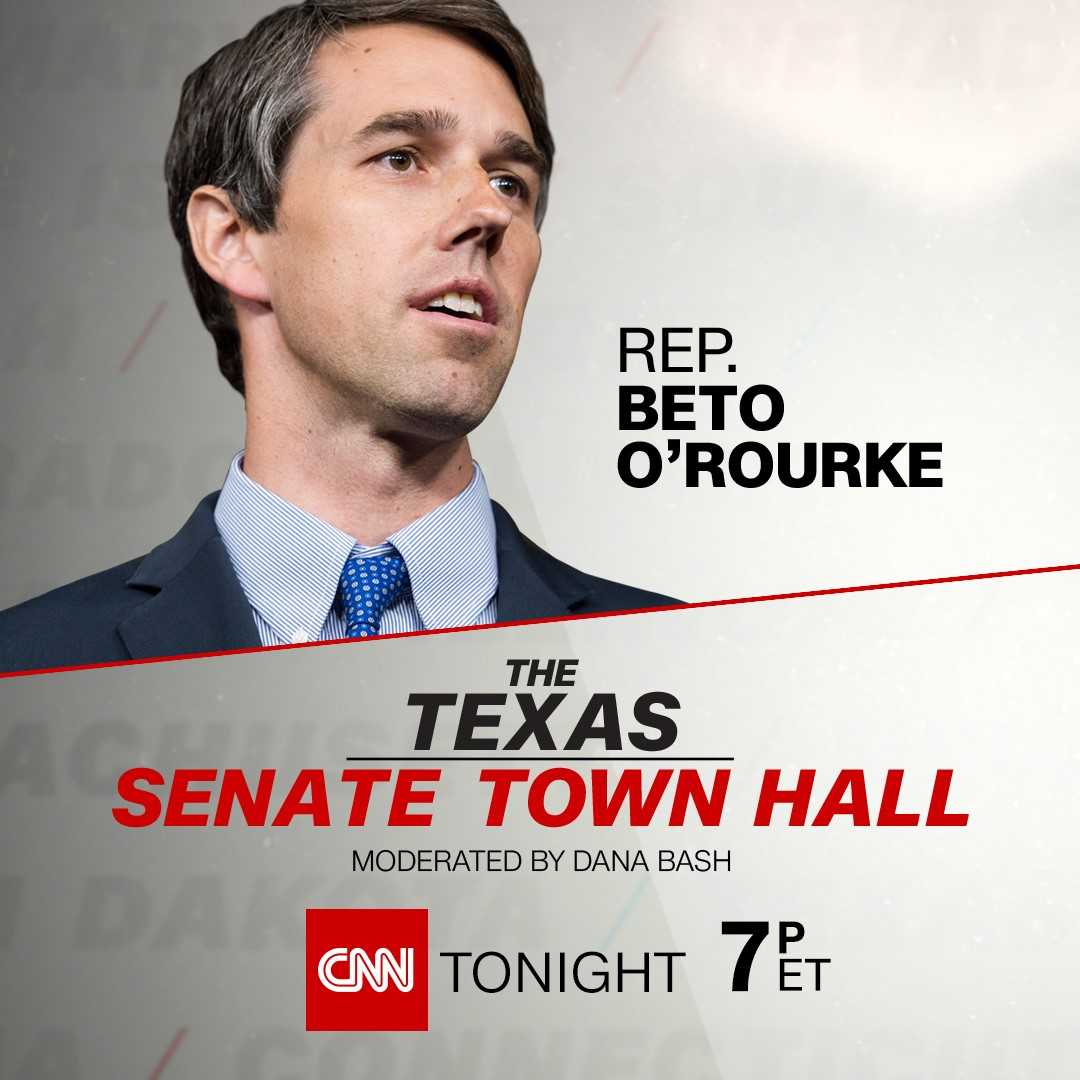 We go live at 7 p.m. ET. Click the arrow below to tell a friend. 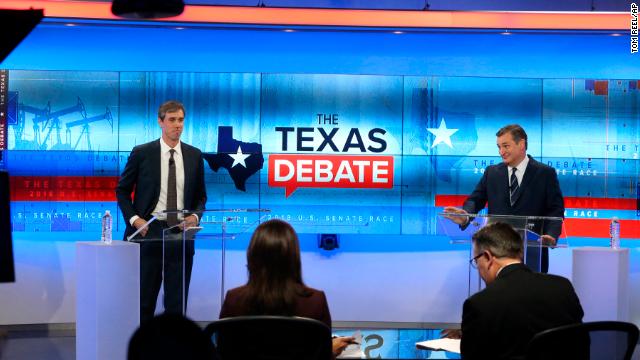 What this all means: O'Rourke's aggressive tactic could be necessary. A new CNN poll out Tuesday showed Cruz with a 7 percentage point lead — consistent with other recent surveys that have shown the Republican clearly ahead.