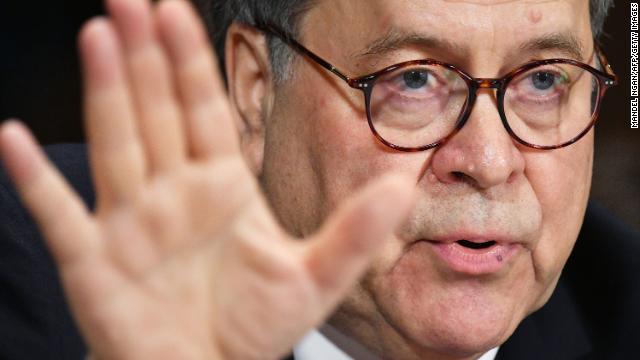 The Justice Department also informed the committee that it would not comply with its subpoena for the full, unredacted report from special counsel Robert Mueller, Nadler said, missing a deadline the committee had set for Wednesday.

If the Justice Department does not change course in the next day or two, Nadler said, the committee is likely to begin contempt proceedings against Barr over defying the subpoena for the full report.

Here are some of the key things Barr said:

Meanwhile, there were two stand-out exchanges between Barr and Democratic senators:

The Senate Judiciary committee's hearing with Attorney General William Barr just wrapped up. At the end of the session, chairman Lindsey Graham said he plans to write a letter to special counsel Robert Mueller, inviting him to speak to the committee.

"I'm going to ask him, 'Is there anything you said about that conversation that he disagrees with?' And if there is, he can come and tell us," Graham said.

"I'm going to give him a chance to correct anything you said that he finds misleading or inaccurate and that will be it," he said.

After the hearing was over, reporters caught up with Sen. Graham, who then said he’s not bringing Mueller before Senate Judiciary. "It’s over," the chairman said.

Attorney General William Barr told a Democratic senator he wouldn't share notes from a call he shared with special counsel Robert Mueller after receiving Mueller's "snitty" letter -- which he assumed was written by a staffer -- about his summary of Mueller's report.

Blumenthal: Did you make a memorandum of your conversation?

Blumenthal: Did you make a memorandum of your conversation.

Blumenthal: Did anyone, either you or anyone on your staff, memorialize your conversation with Robert Mueller?

Blumenthal: Who did that?

Barr: There were notes taken of the call.

Blumenthal: May we have those notes?

Barr: Why should you have them?

Sen. Lindsey Graham, the committee's chairman, then said they would ask Robert Mueller about what Barr has been saying, and ended the hearing.

During an exchange with Democratic Sen. Cory Booker, Attorney General William Barr seemed to be unaware of one of the most intriguing and widely covered elements of the Russia investigation: The bombshell that Trump’s campaign chairman sent internal polls to a Russian oligarch close to Vladimir Putin.

Booker: (The Mueller report) is a document that shows over 200 connections between a presidential campaign and a foreign adversary. Sharing information that would be illegal if you did it with a super PAC, we know that.

Barr: What information was shared?

Booker: Polling data was shared, sir. It’s in the report, I can cite you the page.

The New Jersey senator then took things in a different direction, needling Barr for spinning on Mueller’s report. But it’s clear Booker was referring to how Trump campaign chairman Paul Manafort provided internal campaign information to Konstantin Kilimnik, one of his Russian business associates. The FBI believes Kilimnik has ties to Russian intelligence agencies.

What the Mueller report said: “Manafort instructed Rick Gates, his deputy on the Campaign and a longtime employee, to provide Kilimnik with updates on the Trump Campaign -- including internal polling data, although Manafort claims not to recall that specific instruction. Manafort expected Kilimnik to share that information with others in Ukraine and with (Russian oligarch Oleg) Deripaska. Gates periodically sent such polling data to Kilimnik during the campaign.”

Booker, one of several Democratic senators on the committee who are running for president in 2020, later said Barr’s handling of the Mueller report has been “alarming.”

It "should be deeply troubling to entire American public is that he made a decision and didn’t review the evidence," Harris said after leaving the room.

"No prosecutor worth her salt would make a decision on whether (the President) was involved in obstruction of justice without reviewing the evidence," Harris said. "This Attorney General lacks all credibility and I think has compromised the public’s ability to believe he is a purveyor of justice."

Asked should he resign, she said "yes."

First, some background: Mueller's report disclosed a previously unknown episode in which Rosenstein resisted Trump's efforts to get him to take the blame for the firing of FBI Director James Comey.

That event was examined as a key piece of Mueller's investigation of Trump's possible obstruction of justice — meaning Rosenstein was an important witness in the probe. Rosenstein also oversaw the probe beginning in early 2017.

Here's how the exchange between Harris and Barr played out:

Harris: Did the ethics officials in your office in the Department of Justice review the appropriateness of Rod Rosenstein being a part of making the charging decision on an investigation which he is also a witness in?

Harris: In making a decision on the Mueller report?

Harris: And the findings of whether or not the case would be charged on obstruction of justice? He had been cleared on that?

Barr: He was the acting attorney general on the Mueller investigation.

Harris: Had he been cleared to make —

Barr: I'm informed that before I arrived, he had been cleared by the ethics officials.

Barr: Of serving as acting attorney general on the Mueller case.

Harris: How about making a charging decision on obstruction of justice, the underlying offices which include him as a witness?

Barr: That is what the acting attorney general's job is.

Harris: To be a witness and to make the decision about being prosecuted?

Barr: Well, no. But to make charging decisions.

Harris: I have nothing else. My time has run out. 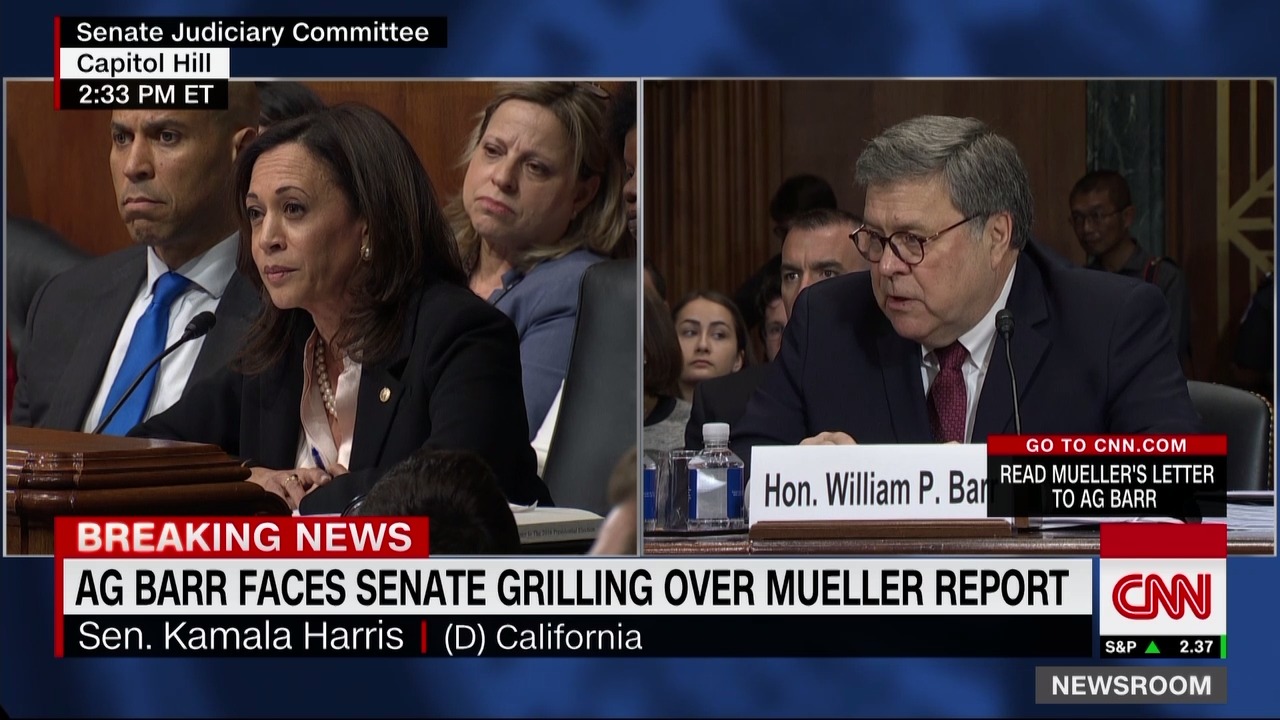 Sen. Kamala Harris, a Democratic presidential candidate, accused Attorney General William Barr of failing to look at evidence before making a decision on obstruction of justice.

Harris grilled Barr on statements he made in his March 24 summary, saying he and Deputy Attorney General Rod Rosenstein had looked at the evidence in special counsel Robert Mueller's report before reaching their decision on obstruction of justice. In his letter, Barr said he found the evidence was not sufficient to establish that the President committed obstruction of justice.

But Harris questioned whether Barr had personally reviewed the special counsel's "great deal of evidence."

She then asked, "My question is in reaching your conclusion, did you personally review all of the underlying evidence?"

Barr responded, "No," adding that he "accepted the statements in the report as the factual record."

Here's a portion of Harris' questioning:

Harris: "As the attorney general of the United States, you run the United States Department of Justice. If in any US attorney's office around the country, the head of that office, when being asked to make a critical decision about, in this case, the person who holds the highest office in the land, and whether or not that person committed a crime, would you accept them recommending a charging decision to you if they had not reviewed the evidence?"

Barr: "Well, that’s a question for Bob Mueller. He’s the US attorney. He’s the one who presents the report."

Harris: "But it was you who made the charging decision, sir."

Harris: "You made the decision not to charge the President."

Harris: "You said it was your baby, what did you mean by that?"

Barr: "It was my baby to decide whether or not to disclose it to the public."

Harris: "And whose decision was it -- who had the power to make the decision about whether or not the evidence was sufficient to make a determination of whether there had been an obstruction of justice?"

Barr: "Prosecution memos go up to the supervisor, in this case, it was, you know, the attorney general and the deputy attorney general, who decide on the final decision. And that is based on the memo as presented by the US attorney's office"

Attorney General William Barr told lawmakers he does not recall discussing any investigations that stemmed from special counsel Robert Mueller's probe with the White House.

Sen. Richard Blumenthal, a Democrat from Connecticut, pressed Barr about his discussions with the White House.

Here's how that exchange went:

Blumenthal: "And will you give us an ironclad commitment that you will in no way--"

Barr: "By the way I’m not sure, you know, the laundry list of investigations, but I certainly haven’t talked the substance or been directed to do anything on any of the cases."

Blumenthal: "Well let me give you an opportunity to clarify. Have you had any conversations with anyone in the White House about those ongoing investigations that were spawned or spun off by--"

Barr: "I don’t recall having any substantive discussion on the investigations-- "