Our live coverage has ended. Scrolls through the posts below to see how the day unfolded, or read more about the hearing here.

The Justice Department is hitting back against House Speaker Nancy Pelosi accusing Attorney General Bill Barr of a crime this morning. 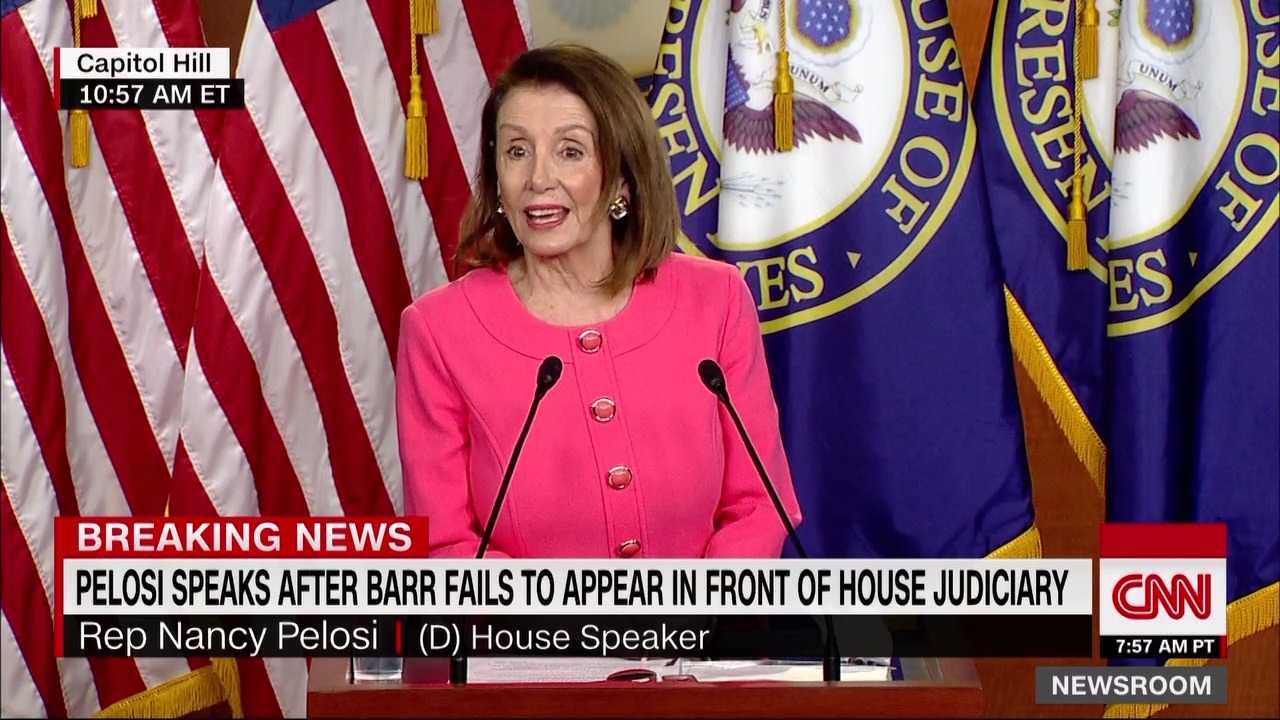 She just criticized Barr for the testimony he's previously given to Congress and accused him of lying to Congress -- a crime.

Later, Pelosi was asked bluntly if she believes Barr committed a crime.

She said this: "He lied to Congress. And if anybody else did that, it would be considered a crime. Nobody is above the law. Not the President of the United States and not the attorney general."

When asked if she believe Barr should go to jail, Pelosi said "there’s a process involved here" and added that "the committee will act upon how we will proceed."

Democratic Rep. Ted Lieu, who sits on the House Judiciary Committee, dismissed questions that the Democrats' tactics with Attorney General William Barr may have backfired in trying to gather evidence and question him.

But Lieu said confidently that Democrats will impeach Trump if his administration doesn't comply with Democrats’ requests for information.

When asked by CNN's Manu Raju if he had any assurances from Chairman Jerry Nadler or Speaker of the House Nancy Pelosi, Lieu said it was his personal opinion, but that “it’s unifying the caucus.”

“You understand that you cannot have Donald Trump and the executive branch blowing off Congress, ignoring Congress," he said. "So, if they push us to go there, we are going to go there."

House Judiciary Ranking Member Doug Collins, a Georgia Republican, spoke to reporters after the hearing and told CNN's Manu Raju that there was “no precedent” for attorneys to question witnesses at a congressional hearing.

“Why does the Chairman think so little of his lawyers on his committee that he wouldn’t take 30 minutes for himself or for others to actually ask questions?”

Collins said the issue “is becoming a circus” and that yesterday’s events “was a travesty in our committee.”

House Judiciary Chairman Jerry Nadler repeated his threat to hold Attorney General William Barr in contempt, though he said his committee would “make one more good faith attempt to negotiate."

Nadler, speaking to reporters after the hearing, said if there’s no progress “we will proceed to hold the Attorney General in contempt.”

Asked how long Barr would be given before the committee would hold him in contempt, Nadler said, “maybe by Monday, we’ll see.”

Nadler said his committee could not concede “the ability to control the manner in which Congress does its job."

"The attorney general is bound, as are other witnesses to come before the committee, and he cannot dictate to us how we will do our job. We feel that this is the most effective way of doing it, and that is our decision.”

“We had no choice today because my chairman took away our rights to ask him questions,” Collins said.

Remember: Barr's decided to skip the hearing after a dispute between House Democrats and the nation's top law enforcement officer over whether Barr would publicly face questions from committee staff attorneys.

Collins said it is unprecedented for Nadler to demand staff lawyers question a witness.

White House press secretary Sarah Sanders had harsh words for House Judiciary Chairman Jerry Nadler while speaking to reporters this morning, claiming Nadler has “lost confidence in himself and his capability to do his job,” referencing his plan for staff attorneys to question at today’s hearing.

She said it “seems like a pretty pathetic moment” for Nadler.

Attorneys would be more effective in questioning, as they would get 30 minutes to question, instead of give minute rounds for members.

“If he and his committee aren’t capable of actually asking the attorney general themselves and need to staff that out, it seems like a pretty pathetic moment for the chairman of that committee and look — we lost confidence in Jerry Nadler a long time ago but it’s surprising to find out he’s actually lost confidence in himself and his capability to do his job. If he can’t and he’s not capable of asking the attorney general questions- maybe he should step down and resign and allow somebody else that can.”

Rep. Steve Cohen, a Democrat of Tennessee, had an unusual breakfast at today's hearing: fried chicken.

After the hearing, Cohen spoke to reporters.

"Chicken Barr should have showed up today," he said. "It's a sad day in America."