The remains of ISIS leader Abu Bakr al-Baghdadi have been buried at sea, according to two US defense officials.

On Sunday, White House national security adviser Robert O’Brien told NBC’s “Meet the Press” that he expected the US to follow the same protocol as al Qaeda leader Osama Bin Laden, who was killed in a 2011 raid in Pakistan by US Navy SEALs and buried at sea.

Appearing on MTP, O’Brien said Baghdadi’s “body will be disposed of properly.” Asked if the US would follow the same protocol as bin Laden, O’Brien said, “I would expect that to be the case.”

On the same day that an American raid killed ISIS leader Abu Bakr al-Baghdadi, a separate attack took out the group's spokesman, according to the Kurdish-led Syrian Democratic Forces (SDF), which coordinated with the US on the joint operation.

SDF spokesman Kino Gabriel told CNN that al-Muhajir was killed on the "same day" as Baghdadi. A senior Iraqi military official also confirmed to CNN that two other ISIS leaders died alongside al-Muhajir.

A US official told CNN that al-Muhajir was likely dead, but could not confirm.

Secretary of State Mike Pompeo on Monday expressed confidence that the US will be able to continue to gather intelligence despite largely withdrawing from Syria and cutting ties with the Kurds.

“I have enormous confidence that we’ll have intelligence professionals where we need them, we’ll be able to reach them,” Pompeo, who was the CIA director for more than a year, told Fox & Friends.

“I have a pretty good sense of how those operations, those intelligence operations, are conducted,” he said. “It’s complex, it’s sophisticated, it is broad, it is deep. “

Pompeo said the threat of radical Islamic extremism had not gone away, but that he was confident the US still had the intelligence it needed to "to undertake this absolutely vital mission for American national security.”

President Trump, speaking at the International Association of Chiefs of Police conference in Chicago, touted the death of ISIS leader Abu Bakr al-Baghdadi — but said "another President should have gotten him."

"They’d been looking for him for a long time," Trump said. “He was a sick and depraved man, and now he’s dead ... He’s dead as a doornail, and he didn’t die bravely either.”

Trump said killing Baghdadi was a top priority: He said that when officials would tell him about the deaths of other terrorists, he'd ask about the whereabouts of the ISIS leader.

“Another President should have gotten him," he added.

Democratic Sen. Chris Coons has criticized Trump for leaving top Democratic leaders in the dark about the Baghdadi raid.

"There is a long tradition of the President notifying leaders in Congress of both parties when there's a sensitive operation underway," Coons, who represents Delaware, told CNN's John Berman on New Day.

"But to disrespect the Speaker of the House, who is in the direct line of succession to the President, and to not inform bipartisan leaders in Congress, to only inform a few Republicans, I think was just one more important norm of cooperation shattered by this President."

Among those who weren't informed of the operation by the White House were House Speaker Nancy Pelosi, Senate Minority Leader Chuck Schumer and House Intelligence Chairman Adam Schiff (all three are Democrats). The move to not notify notable leaders goes against the usual tradition for such high-profile operations and undercut praise for the risky mission. 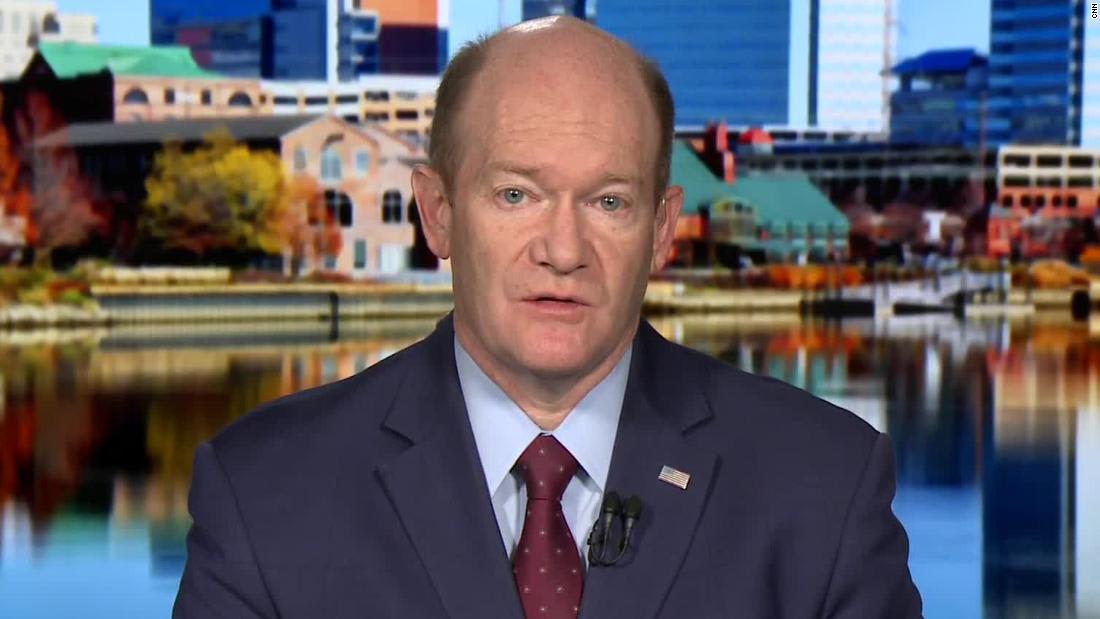 The President said the administration did not brief lawmakers due to a fear that they would leak information to the news media that could cost American lives.

"And I think the President should have the trust and confidence in our leaders in Congress to know that they would not have leaked sensitive details, certainly after the event," Coons said Monday, adding that he thinks it was Trump who shared a "remarkable, even disturbing amount of detail about the operation" during his announcement of the raid.

Democratic Rep. Elissa Slotkin of Michigan echoed Coons' statement, saying "there's a lot of traditions that go on when it comes to the executive branch notifying the legislative branch about these kinds of operations."

She said the so-called Gang of Eight -- the bi-partisan group of lawmakers who have access to the most highly classified information -- should have been informed "so that it's a bipartisan approach to understanding what our military is doing."

"I just don't think it sets the right tone and certainly doesn't reflect what our forces on the ground would ever do," Slotkin said.

US Secretary of State Mike Pompeo has defended the decision not to brief members of Congress about the raid that killed ISIS leader Abu Bakr al-Baghdadi.

“So there were only a handful of us that were dialed into this operation, myself and a handful of others, and then those, of course, who were executing the mission, in the run-up to this,” Pompeo told Fox and Friends.

Those involved in the operation had two priorities, Pompeo said, which included ensuring information security and executing the mission.

“We’ve been tracking this guy for a long time, we wanted to take no risk that anyone would ever compromise the operation, so we were very focused on information security," Pompeo said. "Second, we wanted to make sure we were doing it right, and so we were focused on delivering the outcome that we got.”

“That’s what the American people should be focused on. It’s what President Trump and our team were focused on all of the days leading up to this mission,” he added.

Pompeo, who was in Kansas at the time of the raid, said he “would have loved to have been there,” but noted that he “was in close touch with the leaders who were in there.”

“State Department was fully engaged making sure we were delivering the things that we needed to for what was an amazing military operation that night, a remarkable turn of events which will have real impact all across the world,” Pompeo said.

President Donald Trump continues to take a victory lap on the Baghdadi raid. Touting the killing in addition to an all-time S&P 500 high, Trump tweeted: “We are stronger than ever before, with GREAT upward potential. Enjoy!”

Trump also commented on the Baghdadi operation while speaking to reporters at Andrews Air Force Base earlier this morning. He called the raid an “amazing display of intelligence and military power and coordination and getting along with people,” adding that he was considering releasing video footage of it.

The daring special forces raid that killed the leader of ISIS cannot have come at a better moment for a crisis-haunted President Donald Trump, but he may have incited a bitter new turf war between the White House and Capitol Hill by failing to inform congressional leaders about the raid.

Beset by a deepening impeachment storm and fury among Republicans about his Syria withdrawal, Trump broke into America's Sunday morning to announce an unequivocal win for the nation abroad.

He relished the demise of ISIS founder Abu Bakr al-Baghdadi, playing the role of a ruthless commander-in-chief to silence critics of his impulsive foreign policy leadership.

He also said the White House did not inform key Democrats on the Hill -- including those leading the impeachment inquiry into him -- about the raid ahead of time due to fears that they would leak the news. Trump wasn't under an obligation to inform Democrats on the Hill, but the move goes against the usual tradition for such high-profile operations.

Speaker Nancy Pelosi said criticized the move, saying "Russians but not top Congressional leaders were notified of the raid in advance" and that "the House must be briefed on this raid."

Baghdadi's death momentarily put Democrats who have been squeezing Trump incessantly with their impeachment inquiry on the back foot. While many praised the courage of the special forces operators, few of Trump's domestic political foes were ready to give the President any credit.

Read all the latest on the impeachment inquiry here: 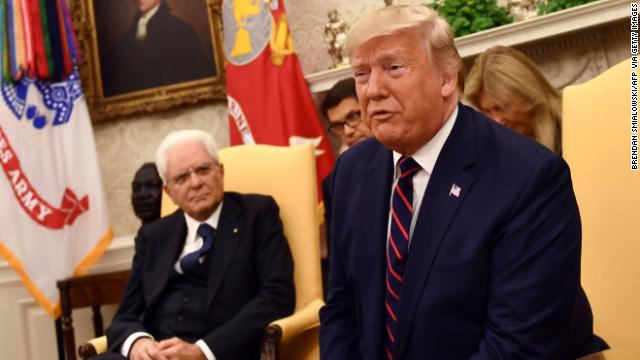 The latest on the Trump impeachment inquiry: Live updates

One of Abu Bakr al-Baghdadi's closest collaborators, a relative through marriage, provided key information about the ISIS leader that helped lead to his capture, a senior Iraqi government official told CNN.

Mohammed Ali Sajet -- an ISIS member since 2015, who acted as a guide for Baghdadi -- was detained by Iraqi authorities about two months ago on the outskirts of the capital Baghdad.

A senior official with the Iraqi government told CNN that Sajet provided information about Baghdadi's possible location in Syria, as well as details about a courier that was working with the elusive leader.

“We followed the courier, a raid killed him and that is how we got his wife,” said the senior government official. “He had documents that led to his wife.”

The official said that the courier’s wife led the Iraqis to another location, which had more documents pointing to Baghdadi's whereabouts.

“We give them (the Americans) a tip,” said the official. “We used human intelligence and we get closer.”

While the Iraqi source said the intelligence was central to the manhunt, multiple officials and countries have claimed to have provided information that led to Baghdadi's capture. It was likely a combination of intelligence gathering between several parties that resulted in Baghdadi’s demise.

"I met him in an area close to the Syrian-Iraqi border. His security was good. They were tending and herding sheep. He was there, hiding underground and there was a tent above him."

"Their movement was hard due to the tight grip of security forces on the area I saw him in," he added.

"He was talking about deteriorating security status due to the security forces. He wanted to change his location and didn't know how to."

Fadhil Abu-Ragheef, an Iraqi security expert, told CNN that Sajet gave information to the Iraqis, who shared it with the US and ultimately led them to Baghdadi's compound in Syria's northwestern Idlib province.

Sajet told Al Arabiya that another ISIS member told him he had secured a location in Idlib for Baghdadi.

The Iraqis began to gather more information about Baghdadi six months ago, when they captured a group of six ISIS members west of Anbar, according to Abu-Ragheef. Those six individuals led investigators to Sajet.

Some in the group were also related to Sajet by marriage, and were able to paint a picture for the intelligence services about the terror leader's movements. They would move in the desert and were responsible for bringing Baghdadi food, beverages and women. Sajet described the conditions at one of al-Baghdadi’s hideouts to Al Arabiya.

“He was in an 8-meter-long underground tunnel with a width of 5 to 6 meters. It had a library, religious books, and the Quran and things of sort. It had lights and various things so the hiding situation was good,” he said.