CNN global affairs analyst Max Boot told CNN's Alisyn Camerota and John Berman on New Day that while Trump should celebrate Baghdadi's death, he needs to remember what made the two-hour raid possible.

"Right now President Trump is dismantling the infrastructure that made this raid possible -- in fact made all the success we've enjoyed against ISIS since 2015," Boot said.

"Now he's dismantling it by pulling our forces out of the partnership with the Kurds -- betraying the Kurds," Boot added, referring to Trump's decision to withdraw troops from northern Syria, where US troops worked with Kurdish-led forces in the fight against ISIS.

"There are reports from the intelligence community that ISIS was in fact reviving -- that they still have about 18,000 fighters in Iraq and Syria, and now you're seeing escapes from prison by ISIS detainees," Boot said.

Diane Foley, whose son James Foley was brutally executed in 2014 by ISIS, told CNN's Alisyn Camerota on New Day that Baghdadi's death came as a "welcome surprise" and that she was "grateful" the US still had troops in Syria to see out the operation.

"I was at home and it came as such a welcome surprise," Foley said. "I was so grateful we had troops still in Syria who were able to use the intelligence and make this happen. I'm very very grateful."

Baghdadi's death "protects our world," Foley said, adding: "This man was out to kill many, many more Westerners for sure."

She said she was hopeful that Baghdadi's "demise will be a huge blow to the regrouping of ISIS," but reiterated that "we need to continue to be very vigilant."

"They certainly want to regroup and bring back their reign of terror," Foley added.

She said she now hopes US expertise can be used "to find innocent Americans who have been taken hostage and bring them home."

A source with knowledge said President Donald Trump's order to withdraw US troops from Syria had a major impact on the planning of the operation which killed ISIS leader Abu Bakr al-Baghdadi, but did not necessarily accelerate its launch.

The official also says that the operation would have been impossible without US troops in Syria and the partnership with the Kurdish-led Syrian Democratic Forces (SDF).

The death of ISIS leader Abu Bakr al-Baghdadi in a US raid in northwestern Syria Saturday night is a blow for the terrorist organization.

While ISIS may have a succession plan in place it is likely only known to a very small number of the organization's senior leadership. The group has not publicly signaled who will take over. This means that whoever succeeds Baghdadi may have very little name recognition amongst jihadis worldwide. This may challenge ISIS' ability to inspire global terror.

In removing Baghdadi from the battlefield, the US has neutralized the threat from a man who was both ruthless and highly adept in running a clandestine terrorist organization. After he took over the leadership in 2010 of what was then-called the Islamic State of Iraq, Baghdadi rebuilt the group into a force that just a few years later took control of vast swathes of Syria and Iraq.

In announcing the death of Baghdadi, President Donald Trump declared he was the "world's number one terrorist leader." But for ISIS and its tens of thousands of followers globally, he was much more than that. Ever since Baghdadi was publicly presented as "caliph" by the group in the Great Mosque of al-Nuri in Mosul in July 2014, his followers have held him to be the supreme political and spiritual leader of all Muslims worldwide. 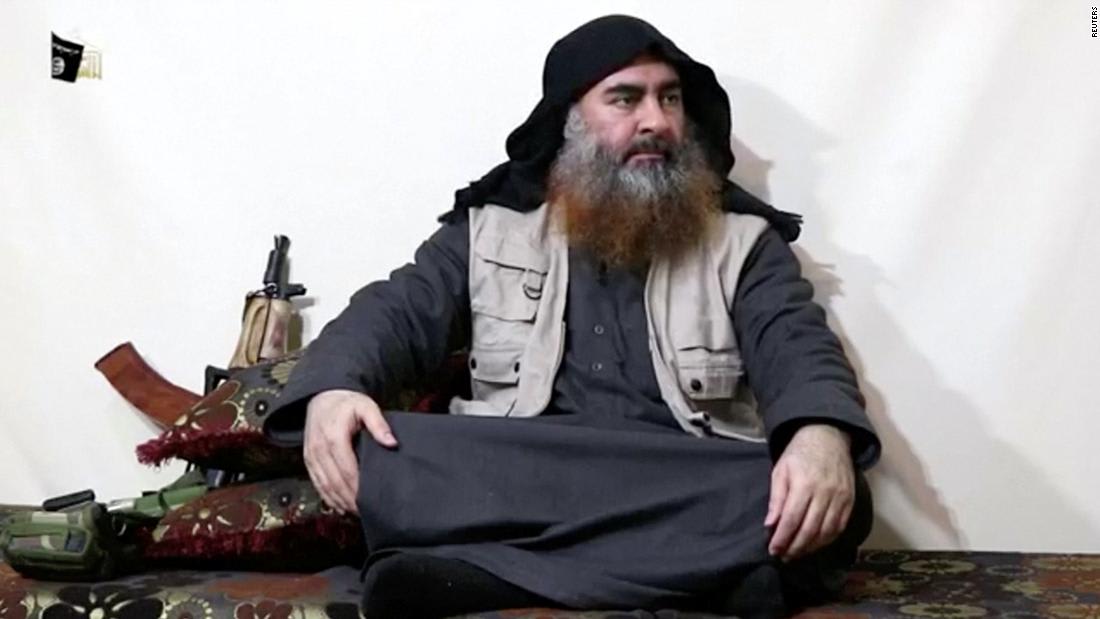 Analysis: Death of Baghdadi leaves ISIS with no obvious successor

The covert operation started around 5 p.m. on Saturday evening as eight helicopters carrying teams of elite US troops, including Delta Force operators, flew exactly one hour and ten minutes over "very, very dangerous territory" towards the compound, according to President Donald Trump on Sunday.

"We flew very, very low and very, very fast. It was a very dangerous part of the mission. Getting in and getting out, too. Equal. We wanted an identical -- we took an identical route," Trump told reporters on Sunday while providing a detailed account of the secret mission.

While in transit, the helicopters were met with local gunfire. US aircraft returned fire and eliminated the threat, Trump said speaking to the media.

After arriving at the compound, US troops breached a wall to avoid a booby trapped entrance and that's when "all hell broke loose," the President added.

While clearing the compound, US forces killed a "large number" of ISIS fighters during a gun battle without suffering casualties, according to Trump.

At least two ISIS fighters were captured and 11 children were taken into custody. Two of Baghdadi's wives were killed during the operation and their suicide vests remained unexploded.

Ultimately Baghdadi, who was also wearing a suicide vest, took refuge in a "dead end" tunnel with three children.

He reached the end of the tunnel, as our dogs chased him down. He ignited his vest, killing himself and the three children. His body was mutilated by the blast. The tunnel had caved in on it in addition," Trump said.

DNA tests that positively confirmed Baghdadi's identity began "about 15 minutes after he was killed" and US teams on the ground "brought body parts back," sources told CNN.

US President Donald Trump announced Sunday morning in a televised address at the White House that the "world's number one terrorist leader" is dead.

ISIS leader Abu Bakr al-Baghdadi "blew himself up" when cornered by US forces who conducted a daring, two-hour nighttime raid on his compound in northern Syria, Trump said, providing a detailed account of the mission.

"Last night was a great night for the United States and for the world. A brutal killer, one who has caused so much hardship and death, has violently been eliminated," he added.

Baghdadi's death marks the end of a years-long hunt to find one of the most wanted terrorists in the world and the man who declared a so-called Islamic caliphate in Iraq and Syria in 2014.

It was the most significant announcement of the death of a terror leader since President Barack Obama revealed al Qaeda leader Osama bin Laden had been killed by US Navy Seals in a dramatic late night address in May 2011.