Sen. Amy Klobuchar comes armed tonight with something many presidential candidates do not have: humor. For those who know her in Washington and Minnesota, she has a quick wit. Those watching from home are learning that, too.

Klobuchar knows people are watching to see how she manages her campaign: Will staff members want to work for her? Will she keep the ones who sign up? The whispers about how she treats her staff likely won’t go away until she answers those questions – over time.

“Undertaking a presidential campaign,” she said, “is a pretty good way to judge people.”

Amy Klobuchar made it clear tonight that she doesn't support free college for all.

"I am not for free four-year college for all, no," she said. "And I wish -- if I was a magic genie and could give that to everyone and we could afford it, I would," she said.

Realizing her answer might not be popular among some of the college students in the crowd -- many of whom are likely burdened with debt of their own -- she explained why:

"I've got to tell the truth. We have this mounting debt that the Trump administration keeps getting worse and worse. I also don't want to leave that on the shoulders of all these we've got to do a balance. Some of it is major tax reform in terms of reversing some of the things this administration has done. Some of it making sure that students are getting degrees and being led to jobs where we actually have jobs."

Klobuchar invoking the national debt is a significant break with numerous top Democrats, who often dismiss the debt in face of pressing issues like climate change, health care and education.

She said she wants to find a mix of incentives for students, and talked about expanding Pell grants for students and refinancing student loans as some examples.

In an emotional moment, Sen. Amy Klobuchar described how her relationship with her father, a prominent journalist who dealt with alcoholism for much of his life, shaped her view of fighting addiction and helping people find redemption.

Klobuchar’s history dealing with alcoholism featured prominently in her questioning of Supreme Court Justice Brett Kavanaugh -- a contentious moment that numerous voters in Iowa and New Hampshire said is when they first took note of the Minnesota senator.

Klobuchar’s father, Jim, was a prominent columnist to the Minneapolis Star Tribune and has been public about his fight with alcoholism. Klobuchar said Monday that her father has been sober for years.

“He continues to go to AA and is still friends with his AA group at age 90. True story,” she said. “And so I was literally able to see him climb to the highest mountains. He’s an adventurer, and really sink to the lowest valleys because of his alcoholism.”

Klobuchar said she and her father were “very close” and that his struggle taught her “was that I want to have other people have that kind of redemption in their lives.”

Sen. Amy Klobuchar outlined a more middle ground position than some of her progressive counterparts on the Green New Deal, saying that the policy is "important to have" because of the "big ideas" it presents, in reality, "there's going to be compromises."

Here's how she phrased it:

It's very important to have, and you do that by launching big, by big ideas. And the actual legislation you do, we know there's going to be compromises. It's not going to be exactly like that, and we know we're going to have to look out for different areas of the country and how we proceed and be smart about it for the middle class and for people that are more vulnerable. We want to make this work for everyone. But we have to start the debate. 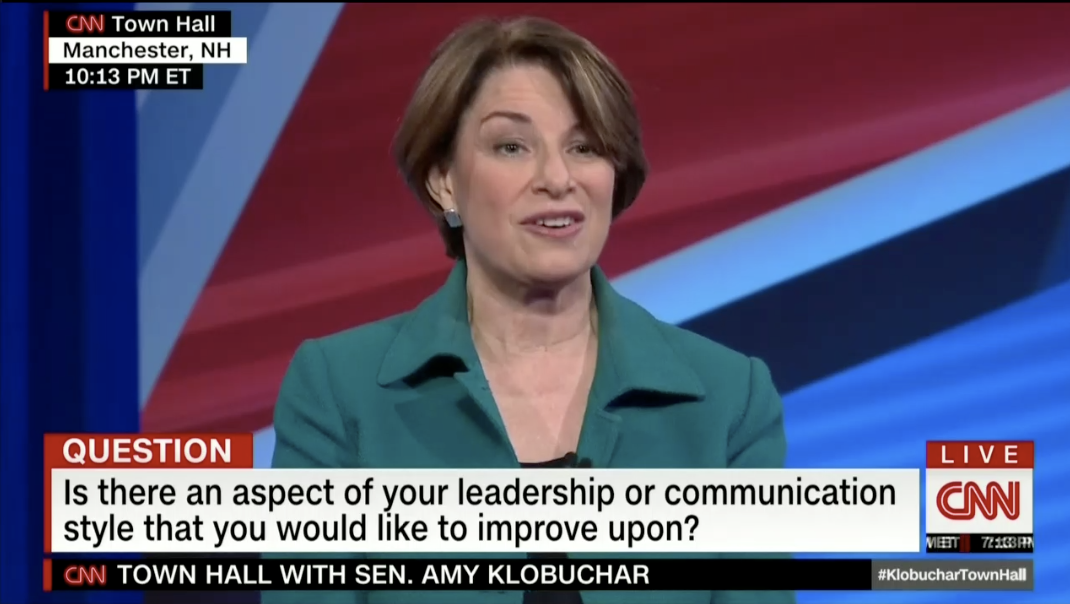 Sen. Amy Klobuchar confronted a series of reports that she created a hostile work environment on Monday by telling voters in New Hampshire that while she did set high expectations for her staff, she did so because she demanded the same out of herself.

“Am I a tough boss sometimes? Yes. Have I pushed people too hard? Yes,” she said in response to a question from a New Hampshire voter.

“But I have kept expectations for myself that are very high," she continued. "I’ve asked my staff to meet those same expectations, and the big point for me is, I want the country to meet high expectations because we don’t have that going now.”

Although Klobuchar has answered questions about her management before, it was noteworthy that a voter here in the Granite State asked the question.

And on Monday, the Minnesota Senator added a layer to the answer by calling out current and former staffers – some by name – who had worked for her for years or gone on to bigger jobs.

“That’s how we passed so many bills, because of the fine work of our staff." 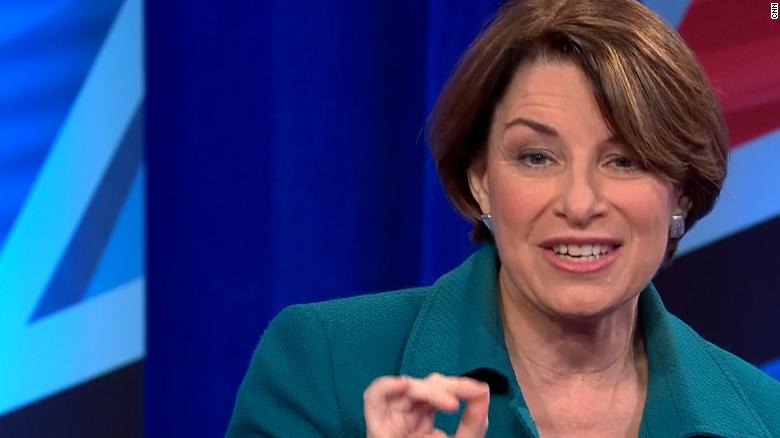 She did not hold back.

"First of all, I believe this is unconstitutional, what he is doing. Okay? It is wrong," Klobuchar said.

She went on to describe what she believes is a national emergency.

The Minnesota Democrat said that if she were president, she "would exercise those powers very carefully."

"I think you have to be very careful about how you do that. But you have emergencies that come up in this country all the time. You know that. And you have to be able to respond, to respond quickly, but to respond thoughtfully. And I believe in respecting the constitution of the United States of America," Klobuchar said. 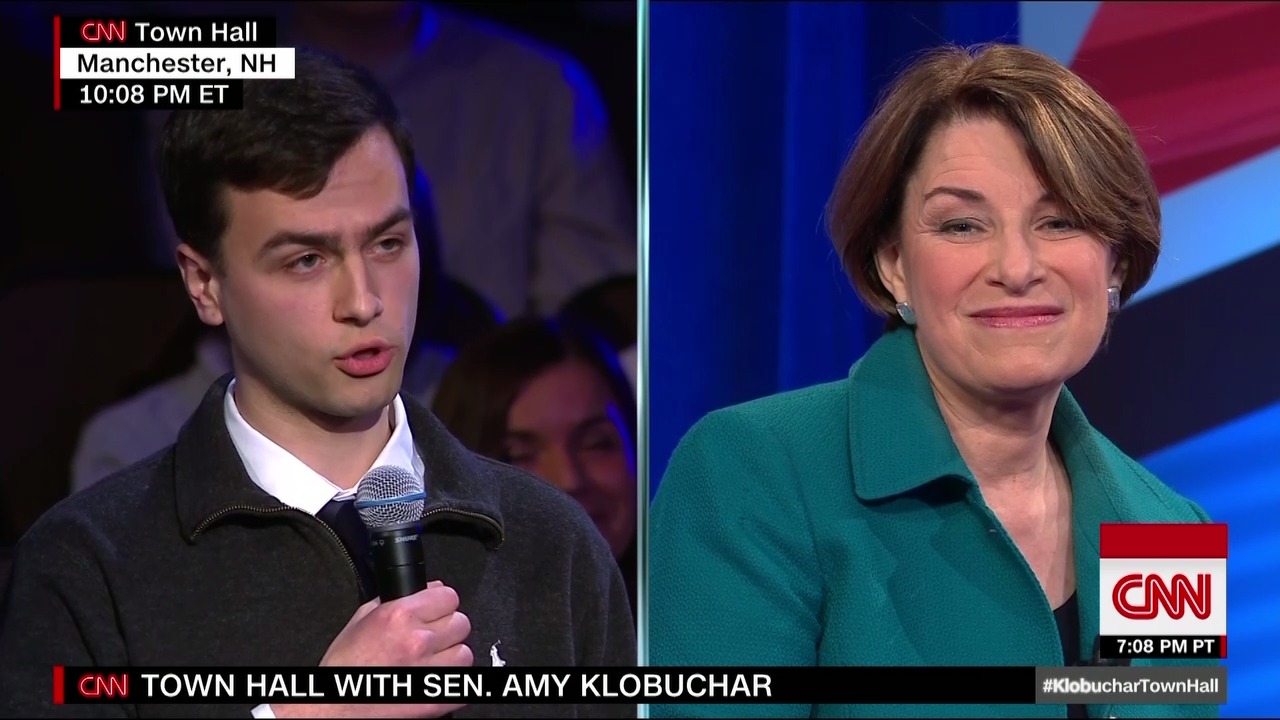 Sen. Amy Klobuchar told a New Hampshire college student who asked if climate change policy would be a priority in her administration that she would, on day one, re-enter the US into the Paris climate agreement and move to enact the clean power rules that the Obama administration had supported before President Trump halted their momentum.

"This isn't just something that's theoretical -- that's happening in the future," she said while describing some of the wildfire escape videos that made our palms sweat last fall. "It's happening right now."

Climate change, she said, is "an urgent cause."

Sen. Amy Klobuchar cast a Medicare for All style health care plan as a possibility to strive for in the future, but added that she doesn’t currently support it because she wants to make changes immediately.

"I think it is something we can look to for the future, but I want to get action now,” Klobuchar said when asked by a New Hampshire voter about the universal health care plan that is backed by Sen. Bernie Sanders and a host of 2020 Democrats.

“It could be a possibility in the future,” Klobuchar said, adding later that she is looking for "something that will work now.”

Klobuchar says she supports universal health care but favors doing so by building on the Affordable Care Act, expanding both Medicare and Medicaid, and creating a public option.

“We have to get to universal health care in this country,” she said. “We have to make sure we build on the work of the Affordable Care Act.” 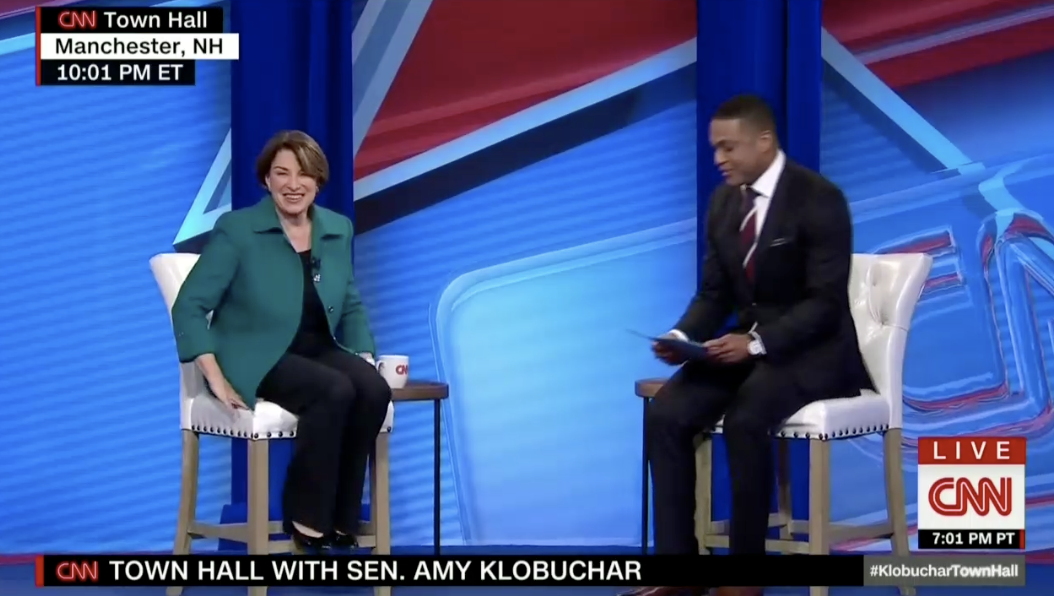 Neila Brownstein, a moderate Democrat with progressive leaning, just told Klobuchar, "I want to hear achievable goals that benefit minorities and the middle class now and are not pipe dreams for the future. Are you my candidate?"

Here's portion of Klobuchar's answer, in which she framed her candidacy as one of bipartisanship that reaches a "higher ground" in politics:

"I think what we need right now in this country is less of this grandstanding and gridlock, less of the shutdowns, which we just saw, and the putdowns, and much more of moving our country forward. I announced my candidacy in front of the Mississippi River for a reason last weekend. I didn't think it was going to be 17 degrees with a bunch of snow, but it was. And I did that because I wanted to make the point that we need to cross a river of our divides. We need to walk over the sturdy bridge that is our democracy, and that we need to get to higher ground in our politics."