Attorneys for the American Civil Liberties Union of Ohio and the ACLU Reproductive Freedom Project filed a lawsuit to block Ohio’s so-called heartbeat bill, which bans abortions after a fetal heartbeat is detected, before it takes effect.

The law will take effect on July 10.

Elizabeth Watson, a staff attorney for the ACLU Reproductive Freedom Project, described the bill as “blatantly unconstitutional” and said the right to abortion is under unprecedented attack, despite “strong public support for supportive, affordable, and barrier-free access to abortion care.”

Jessie Hill, an attorney at ACLU of Ohio, said Wednesday that the so-called heartbeat bill is not isolated, adding that more bills are in the works at the statehouse.

“The six-week abortion ban that the Ohio legislature has passed is just the culmination of this long-standing all-out assault on women in Ohio,” Hill said.

Why this matters: The Ohio bill is just one of a number of similar bills that have been introduced in state legislatures across the country this year. Mississippi Gov. Phil Bryant signed a "heartbeat bill" in March. In Georgia, Gov. Brian Kemp also signed a bill that would ban abortions if a fetal heartbeat can be detected.

Actress Milla Jovovich shared details about her own emergency abortion after expressing her frustrations over new restrictive abortions laws in several states.

Jovovich said she doesn't usually talk about politics, but she was compelled to speak out after the latest actions on abortion rights.

"Our rights as women to obtain safe abortions by experienced doctors are again at stake," she said.

She revealed that she was four months pregnant when she had the emergency abortion two and a half years ago while filming on location. Jovovich said she suffered from depression after undergoing the procedure.

"I was 4 1/2 months pregnant and shooting on location in Eastern Europe. I went into pre term labor and told that I had to be awake for the whole procedure. It was one of the most horrific experiences I have ever gone through. I still have nightmares about it. I was alone and helpless," Jovovich said. "When I think about the fact that women might have to face abortions in even worse conditions than I did because of new laws, my stomach turns."

Jovovich went on to say abortion rights are needed.

"Abortion is a nightmare at its best. No woman wants to go through that," she said. "But we have to fight to make sure our rights are preserved to obtain a safe one if we need to. I never wanted to speak about this experience. But I cannot remain silent when so much is at stake."

House Democratic leaders today reacted to the Alabama abortion bill, calling it a “disgrace” and “reckless.”

“It lays bare the reality that part of the right-wing conservative agenda in the United States of America is to take away reproductive health and freedom of the people of America. That is a disgrace,” Rep. Hakeem Jeffries, chairman of the Democratic caucus, told reporters. 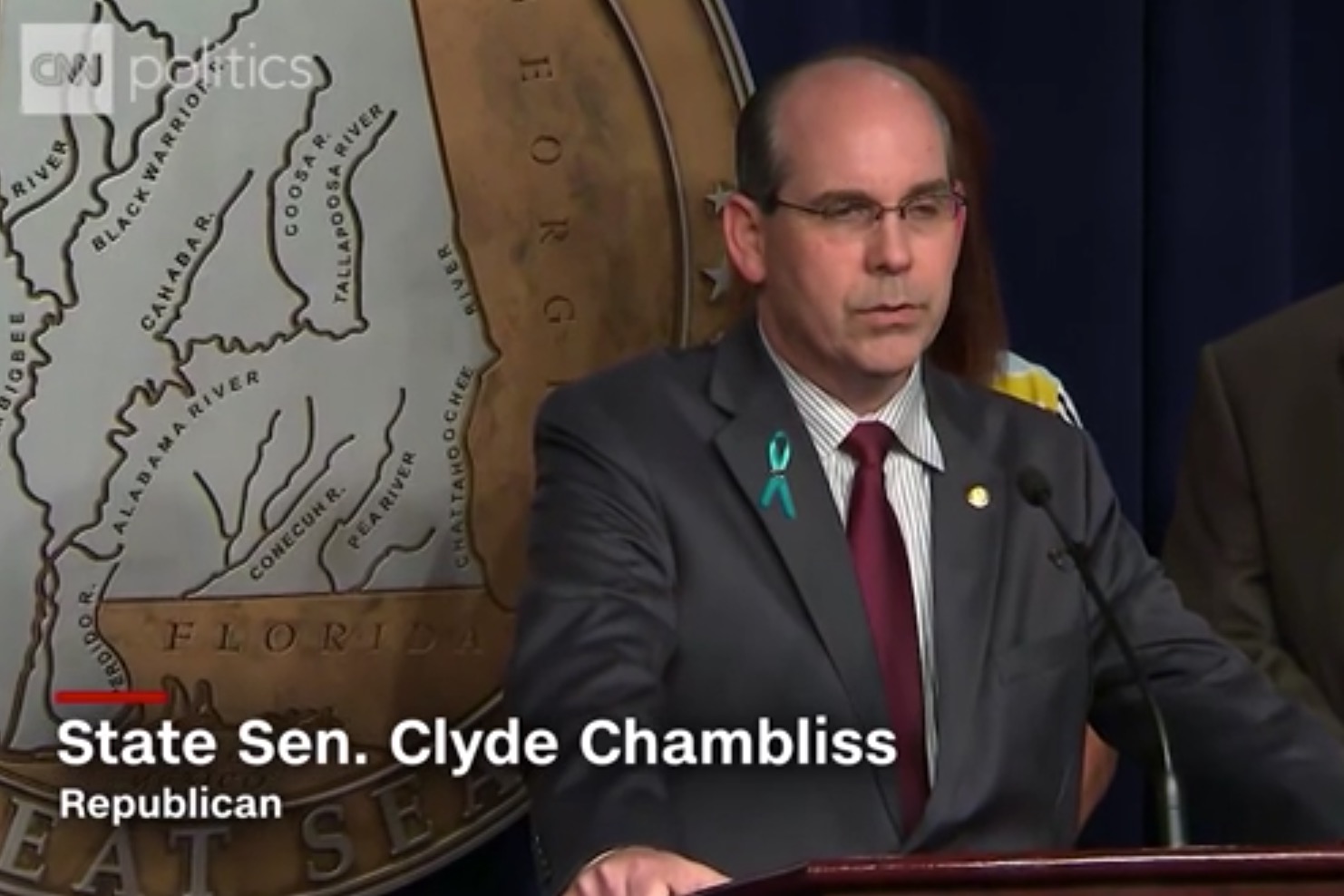 "Even if its origins are in very difficult situations, that life is still precious," the Republican said in explaining his support for the bill.

Chambliss said the bill impacts women who are "known to be pregnant." In a news release, Chambliss touted that his bill outlaws surgical abortions as soon as a pregnancy can be medically determined.

Dr. Leana Wen, President of Planned Parenthood Action Fund, said in a press conference today that the future is dangerous for women’s health rights, especially under the Trump administration.

“We have a President of the United States who willfully lies to the American people to score political points and to provide political cover for politicians who are passing extreme anti-women’s bills. With Trump in the White House and (Brett) Kavanaugh in the Supreme Court women’s health and rights are under assault like never before,” Lee-Gilmore said.

Correction: This post has been updated to accurately attribute a quote from President of Planned Parenthood Action Fund Dr. Leana Wen.

"It wasn't so very long ago when we started talking about the rights of women. Maybe we need to come up with a castration bill. I mean you guys come up with some crazy bills," she said to cheers in the crowd.

She even said she'd like to open up Republicans' minds and see what's inside, and suggested they speak to their mothers.

"I know God made women different. He really did. You all came from a woman. Did you not get anything from her? If you have a mother and she's still alive, deep down she would tell you this is not right. You're shaking your head, but I bet she would," Coleman-Madison said. 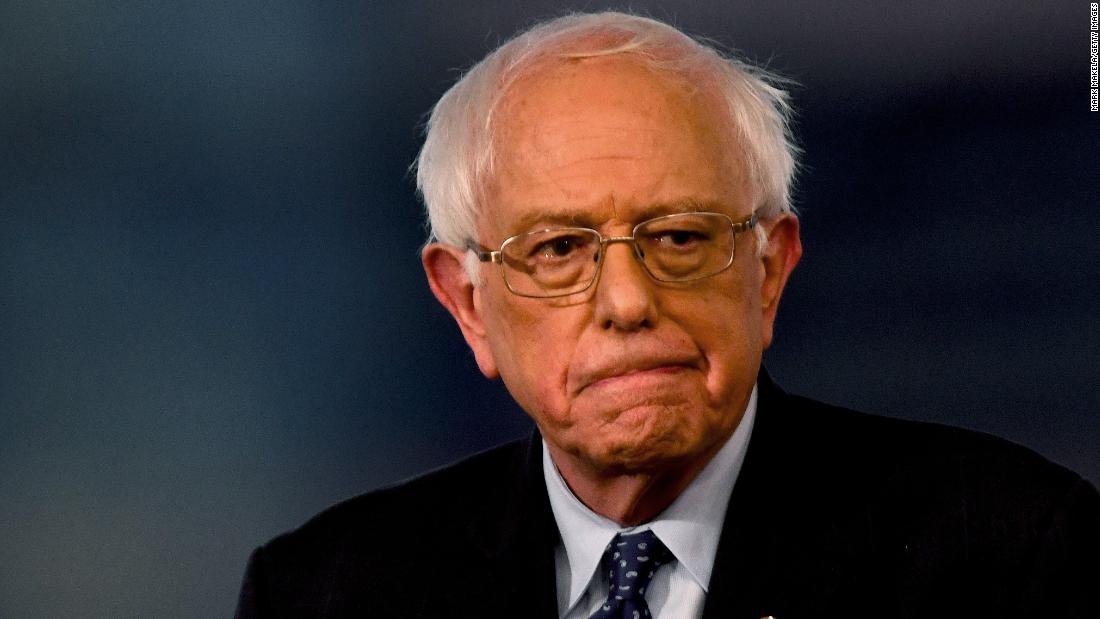 Sen. Bernie Sanders, who is running for president in 2020, called the Alabama state senators who voted to pass the restrictive abortion bill "hypocrites."

They "decry 'big government,' yet they want to control every aspect of women's bodies, private decisions, and futures," Sanders tweeted.

Alabama Gov. Kay Ivey has not yet received the abortion bill passed by the state's Senate last night.

Lori Davis Jhons, spokesperson for Ivey, said they are not expecting to receive the bill until after the legislature gavels in later this afternoon.

"The governor will thoroughly conduct a review before providing any additional comment," Jhons said.

Ivey has not publicly taken a stance on the bill but has previously aligned herself as anti-abortion, lamenting the courts striking down another Alabama abortion law last year.

What happens now: Ivey has six days to sign the legislation, though the bill would not take effect until six months after becoming law. 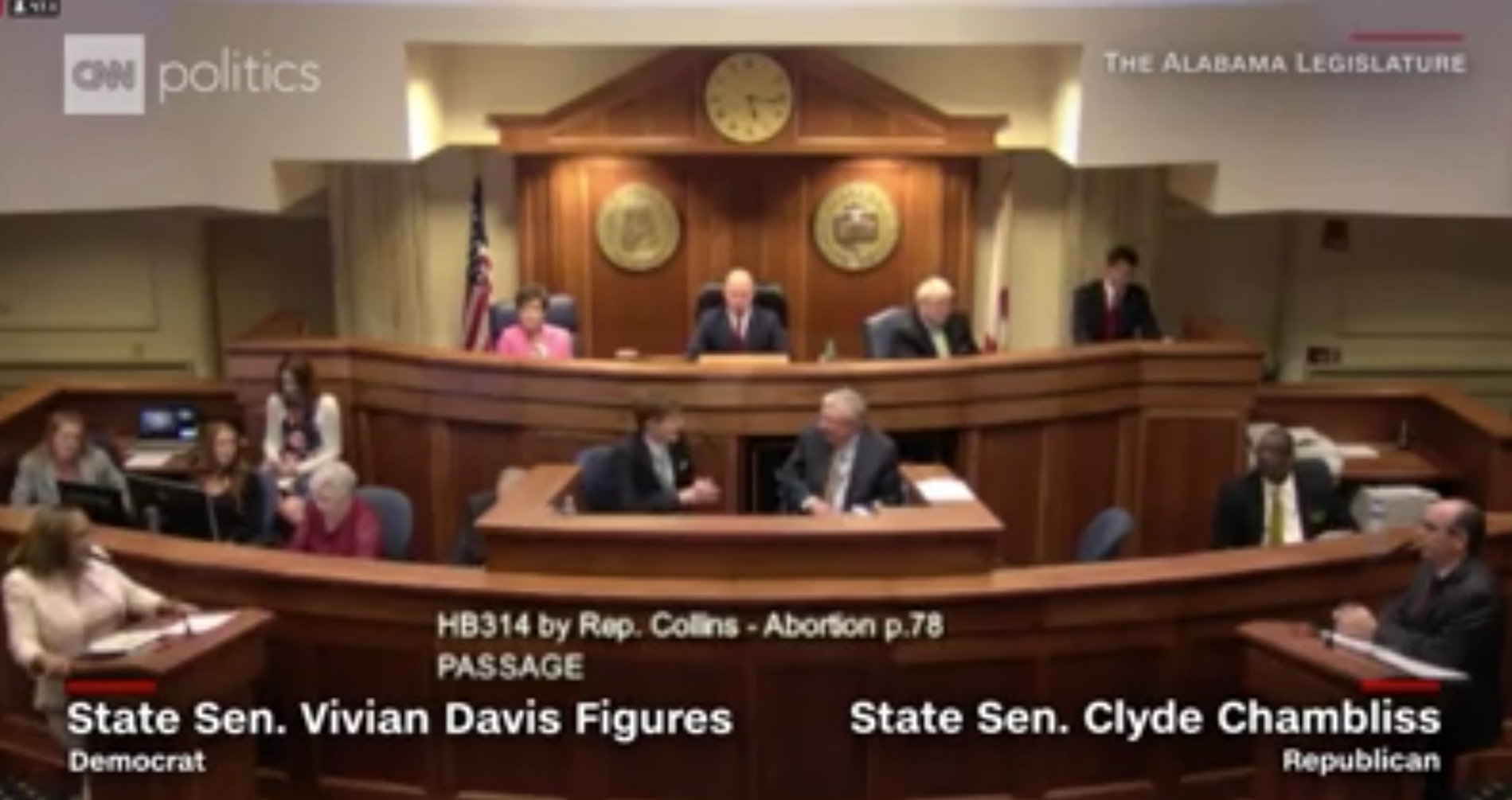 Sen. Vivian Davis Figures, one of six Democrats who voted no on the bill, debated Republican Sen. Clyde Chambliss on the Senate floor last night.

Chambliss responded "no" to both questions. (Some context: Democrats had introduced an amendment to exempt rape and incest victims from the near-total abortion ban, but the motion failed.)

"I want to make the decision for that child," Chambliss responded.