Presidential candidate Elizabeth Warren, who is celebrating her 70th birthday Saturday, gave her birthday twin Meryl Streep a call to also send along her congrats.

Warren happens to share a birthday with the Oscar-winning actress (including the same year: 1949)

Asked about the conversation, a Warren aide confirms it was the Massachusetts senator who initiated the call and that she and Streep have spoken a few times in the past.

Warren aide Nora Keefe tweeted the good news, including a photo of Warren in the car. 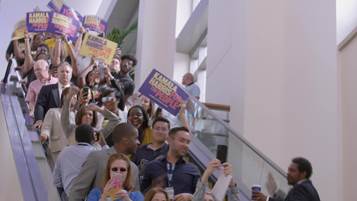 Presidential candidate and Sen. Kamala Harris entered the South Carolina Democratic Party convention on Saturday by dancing down the escalator with a drum line from a local high school.

Harris also recently released her summer playlist, noting in a campaign email Friday that these are the “songs she’s listening to while traveling around the country.” The list, which can be streamed on Spotify, includes “Cold Sweat” by James Brown and “Like a Girl” by Lizzo. 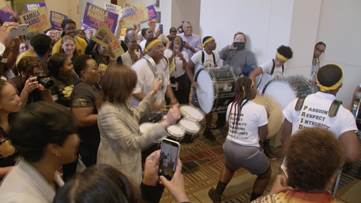 Mayor Pete Buttigieg opened his speech at the South Carolina Democratic Party Convention Saturday by acknowledging how “challenging” this week has been in South Bend, Indiana.

His speech comes less than 24 hours after he attended a contentious march where protesters confronted Buttigieg about the fatal shooting of a black man by a police officer that has roiled the city for the last week.

“I am thankful to be with you. I am with you after a challenging week back home,” Buttigieg said. “I have been off the campaign trail helping my community move through a tragic shooting of a resident of our community by a police officer. It is as if one member of our family died at the hands of another. And even as on outside process works to determine what happened, we already know why such deep wounds are surfacing, why our whole community hurts.”

He added: “I also want to tell you my community is full of people who believe in safety and justice and we will heal and become stronger in the broken places.”

Sen. Kamala Harris delivered a fiery speech at the South Carolina Democratic Party convention on Saturday aimed squarely at her ability to “prosecute” President Donald Trump during the 2020 general election. 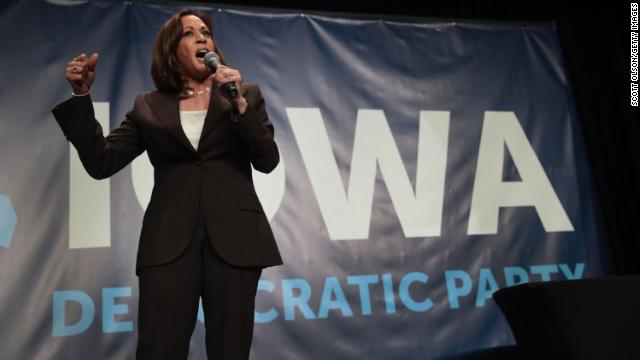 Harris, as she has been doing recently, leaned into her record as a prosecutor, telling that audience, “I know how to take on predators.”

“I took on the big banks and won over 20 billion dollars, I took on for-profit colleges and put them out of business, I took on oil companies who were polluting our environment, I took on transnational criminal organizations who were praying on women and children. I know how to get that job done. And I did it for the people! For the people. So, let me tell you, we need somebody on our stage when it comes time for the general election who knows how to recognize a rap sheet when they see it and prosecute the case so let’s read that rap sheet, shall we,” she said to cheers.

Rep. James Clyburn of South Carolina, the No. 3 Democrat in the House, is hosting more than 20 Democratic rivals this evening for his "World-Famous" Fish Fry, a signature stop on the campaign trail.

Here's what else is happening this weekend: On Saturday, most of the Democratic field will speak at the state's Democratic Party convention as well as at a forum hosted by Planned Parenthood.

Put together, the series of events this weekend offers candidates a chance to make their pitches to the majority black primary electorate — as well as test out their messages ahead of the first primary debate in Miami next week.

Rep. Jim Clyburn tweeted Thursday that there will be 4,400 pounds of fish and 6,400 slices of bread at his famous fish fry event in South Carolina tonight.

One thing to note: In the tweet, Clyburn said 22 candidates will be at the event, but as of this morning, there will only be 21.

Here's who won't be there:

Sen. Kamala Harris picked up an endorsement from an influential figure and member of the Congressional Black Caucus leading up to the fish fry later tonight in South Carolina.

Florida Rep. Alcee Hastings' support makes this Harris' third nod from a member of the Congressional Black Caucus, as she seeks to assemble a winning coalition of black voters throughout the South.

Why this matters: This is an important endorsement for Harris because black voters are a key group needed to win South Carolina.

In 2016, black voters made up 61% of South Carolina's Democratic primary electorate in 2016; 37% identified as black women and 89% of them voted for Hillary Clinton over Bernie Sanders.

Harris has invested considerable time and resources in the state, visiting seven times since her January announcement and outpacing her trips to other early primary states.

The California lawmaker Democrat said that while she agrees with her 2020 opponents on guns (to the extent she knows their plans, she said), the difference in her plan is that it is rooted in “action.”

The differences are “probably just about action,” Harris said.

“I am prepared to act through executive action. Because I just don’t see Congress over these many, many years of tragedies taking action,” she said. “They are just not.”

Harris added later: “We just need to get there. And so, if we can’t get there through legislation then I am prepared to get their through executive action.”

She pledged in April that, if elected President, she would take executive action enacting sweeping gun control measures if Congress fails to send comprehensive legislation to her desk in her first 100 days.