Iran has hoisted a red religious flag warning of a severe battle to come.

For the first time, the flag was unfurled on the great mosque of Jamkaran, a Shia pilgrimage site, in the Iranian holy city of Qom.

It calls for avenging Imam Hussein, the grandson of the Prophet Mohammed, who was slain during a bloody battle in Karbala.

Hussein is a central figure in Shia Islam.

The flag’s slogan – “O’ Avengers of Hussein” – was popularized in the uprising that followed Hussein’s death.

Its resurfacing in Iran serves as an ominous signal of Iran’s expected response to the US assassination of its most powerful military commander, Qassem Soleimani.

Tehran has vowed “forceful revenge” for his killing.

The military adviser to Iran's Supreme Leader said Sunday that his country's response to the killing by the United States of one its most influential commanders will certainly be a military response "against military sites."

In an exclusive interview with CNN in Tehran, Hassan Dehghan said: "The response for sure will be military and against military sites."

Dehghan, a former defense minister, is the main military adviser to Supreme Leader Ayatollah Seyyed Ali Khamenei and is very close to him. 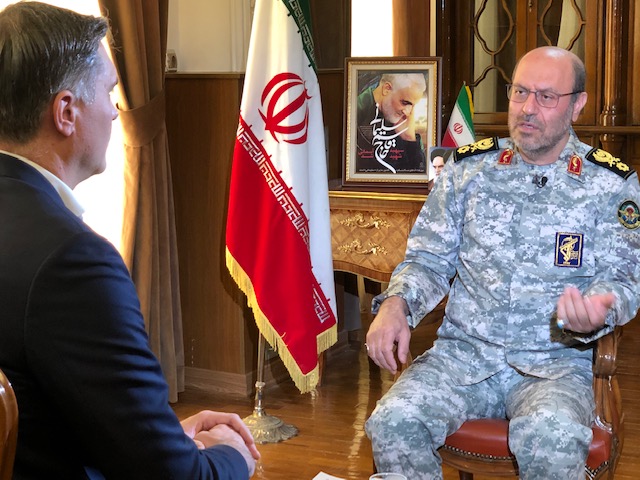 Iran's leaders have promised a retaliation for the killing of the country's top general Qasem Soleimani.

With proxy militia strewn across the Middle East, what could a response from Iran look like? Tehran has many options. Watch CNN's Tom Foreman look at possible scenarios:

Top US national security officials continue to defend the Trump administration's claim that it killed Iranian military commander Qasem Soleimani in response to an imminent threat to American lives, but the lack of evidence provided to lawmakers and the public has fueled lingering skepticism about whether the strike was justified.

President Donald Trump, Secretary of State Mike Pompeo and top military officials have offered similar explanations for targeting Soleimani, citing an "imminent" threat from his plans to carry out what Chairman of the Joint Chiefs Mark Milley called a "significant campaign of violence" against the US in the coming days, weeks or months.

But questions have continued to swirl in recent days about the imminence of such Iranian attacks, whether the administration fully considered the fallout from such a strike against Soleimani, and if an appropriate legal basis was established for the presidential authorization of lethal force.

Iranian Foreign Minister Javad Zarif took to Twitter Sunday to slam US President Donald Trump for threatening to bomb 52 Iranian sites, including cultural sites, if Iran takes action in the aftermath of the killing of top general Qasem Soleimani.

Zarif said targeting cultural sites would be in breach of key principles of international law.

“Targeting cultural sites is a WAR CRIME,” Zarif tweeted. “Whether kicking or screaming, end of US malign presence in West Asia has begun.”

Also taking to Twitter Sunday was Iran’s Minister of Information Mohammed-Javad Azari Jahromi who described US President Donald Trump as “a terrorist in a suit.”

Trump issued the warning to Iran via Twitter Saturday. Read more about the threat here.

Mourners have taken to the streets in Iran’s western town of Ahvaz.

The bodies of Qasem Soleimani and Abu Mahdi al-Muhandis arrived in the city earlier.

A funeral service for Soleimani will take place later on Sunday in Mashhad, at the holy site of Imam Reza Shrine.

Iran will observe three days of national mourning, paying respects to Soleimani, who was seen as a national hero and has been called a martyr by the Iranian leadership.

British Foreign Secretary Dominic Raab said it is important to “de-escalate and stabilize the situation” in the Middle East in the aftermath of the killing of Iranian General Qasem Soleimani but “understands the position that the Americans found themselves in.”

Raab said he was “not naïve” about the role of Soleimani, the Qods force or the Iranian Revolutionary Guard in the region – describing the general as a “regional menace” -- but emphasized that “a war is in no one’s interest.”

Speaking on Sky News on Sunday, Raab said “the only people who would gain” from a possible war would be terrorist groups like ISIS who would try to exploit the vacuum created by any war on the ground.

He said he had spoken to Iraq’s Prime Minister Sunday morning, to the Iraqi President Saturday night, and was planning to contact Iran’s Foreign Minister Javad Zarif.

Raab said he is meeting next week with US Secretary of State Mike Pompeo as well as his French and German counterparts.

Raab's boss, UK Prime Minister Boris Johnson, has found himself under mounting criticism over his notable absence. Johnson has not issued any statements or cut short his Caribbean holiday in light of the escalating tensions in the Middle East.

Hashtag #WhereIsBorisJohnson was trending on Twitter in the UK, and opposition politicians including Labour leader Jeremy Corbyn criticized the PM.

Raab defended his boss, insisting he has been in constant contact with Johnson and “the Prime Minister is in charge.”

Here's a recap of what we know:

Mourners wept as they walked alongside the vehicle carrying his coffin down the streets of Baghdad. Some carried signs that read, "We are all Muhandis and Soleimani."

Iraqi Prime Minister Adil Abdul Mahdi was among the crowd of mourners walking next to the cars carrying the coffins.

Some women carrying flags of the Iraqi Popular Mobilization Forces — the forces al-Muhandis commanded — erupted into tears when the slain commanders were mentioned. Many mourners said the attack strengthened their resolve to expel US forces from Iraq.

"This strike killed our heroes, but it created a thousand more Hajji Soleimanis and Muhandises," said Assifa Abbas, 50, a mother of three PMF fighters. "If Parliament doesn't vote to expel US troops, they will see the true face of the Iraqi street."