The latest on the US-Iran crisis 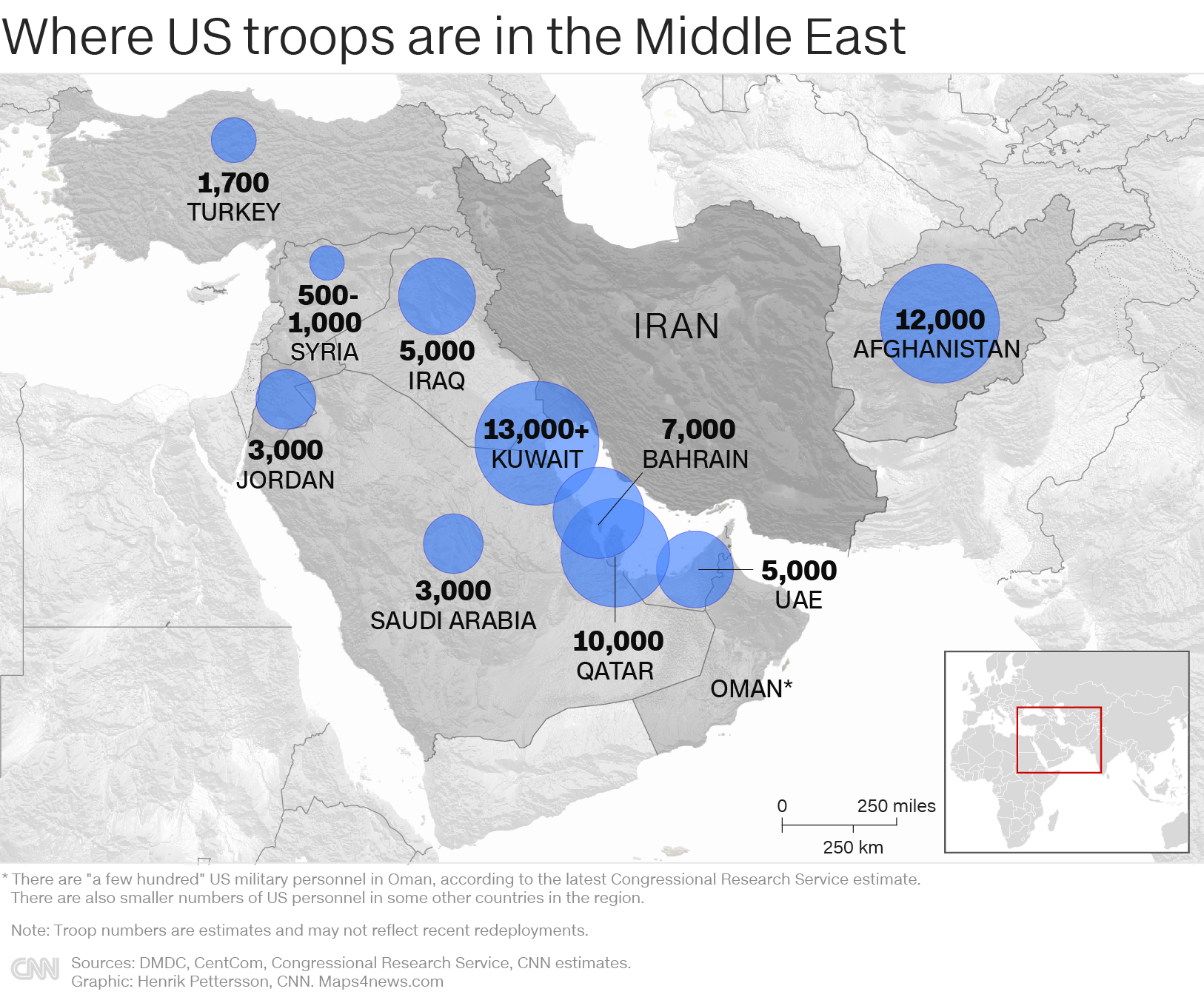 The US has tens of thousands of troops spread across the Middle East.

According to CNN's Barbara Starr, the US military footprint in the Middle East is "all potentially an Iranian target list."

Starr adds, "That is the real challenge here. How do you go ahead and protect all of this."

More on this: The US is deploying 3,500 additional troops to the Middle East following the attack that killed top Iranian military commander Qasem Soleimani.

Tehran's streets were packed with black-clad mourners today as a sea of people turned out to pay their respects to Qasem Soleimani, the Iranian general killed by a US drone strike in Baghdad last week.

The general's body has now been taken to the city of Qom, according to Iran’s semi-official Mehr News Agency. 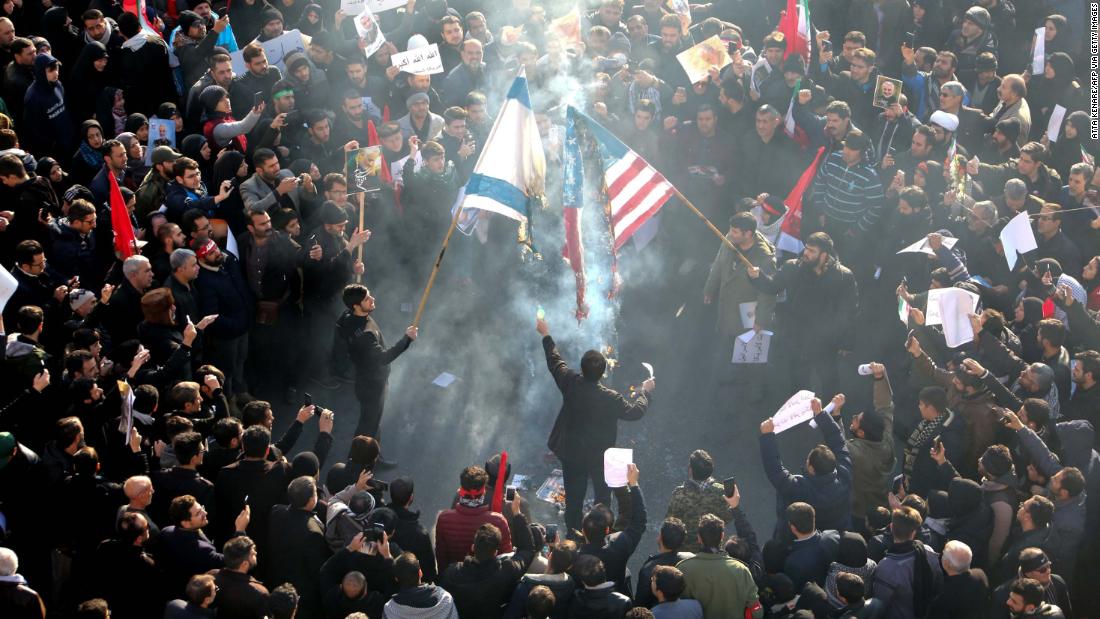 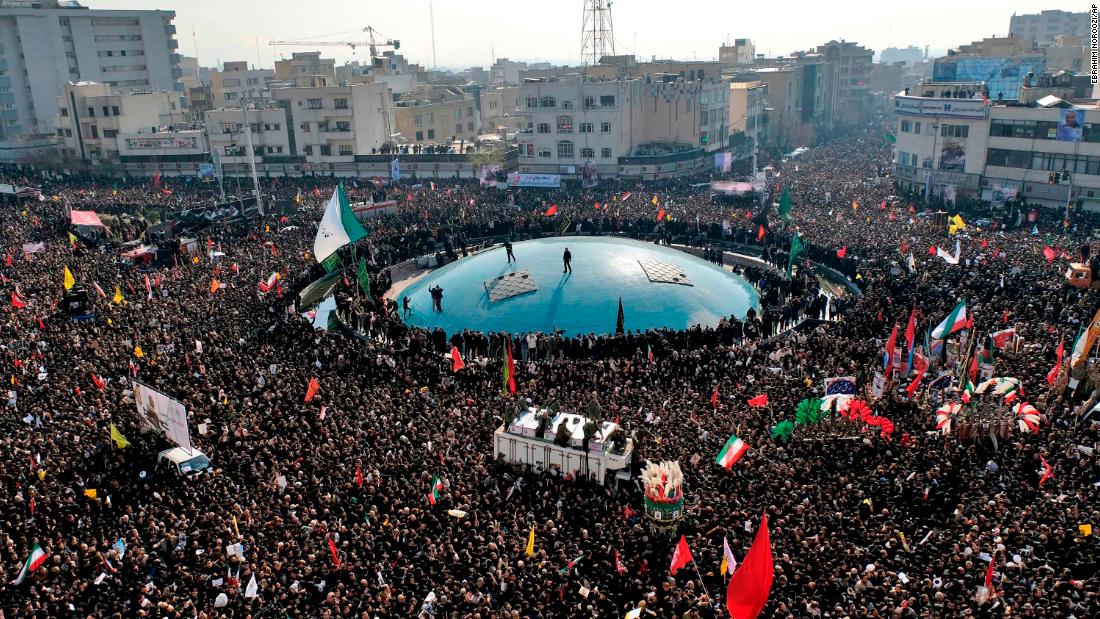 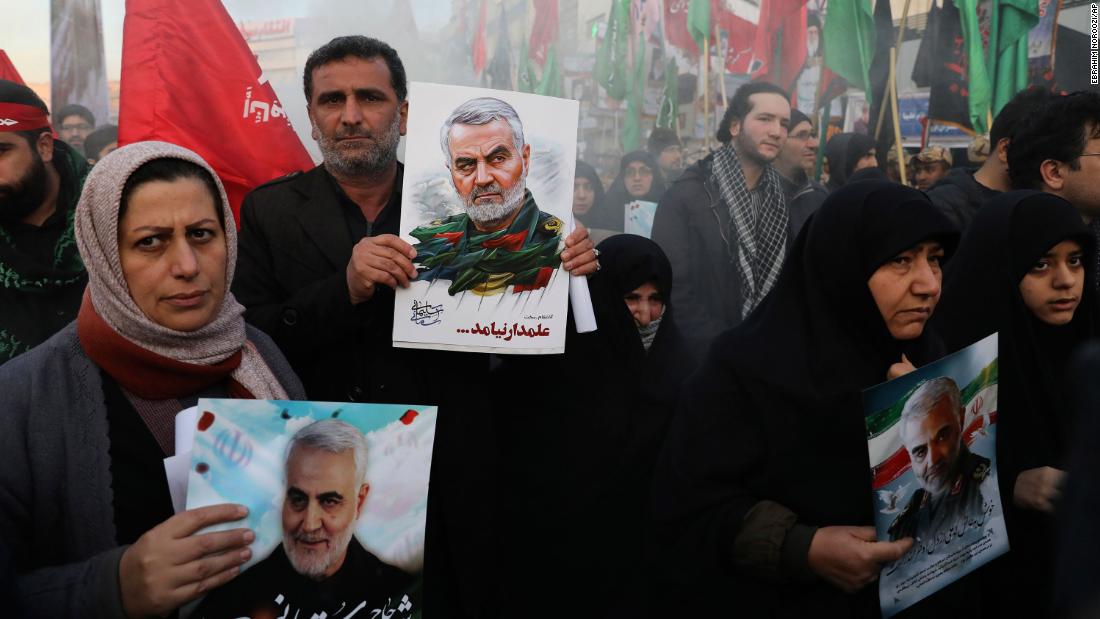 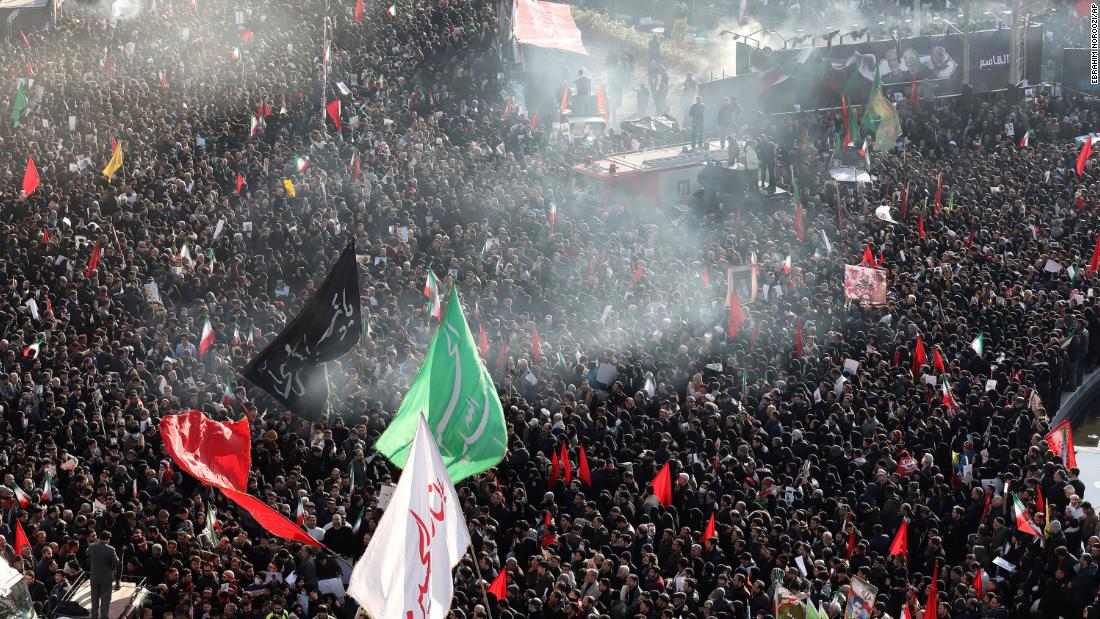 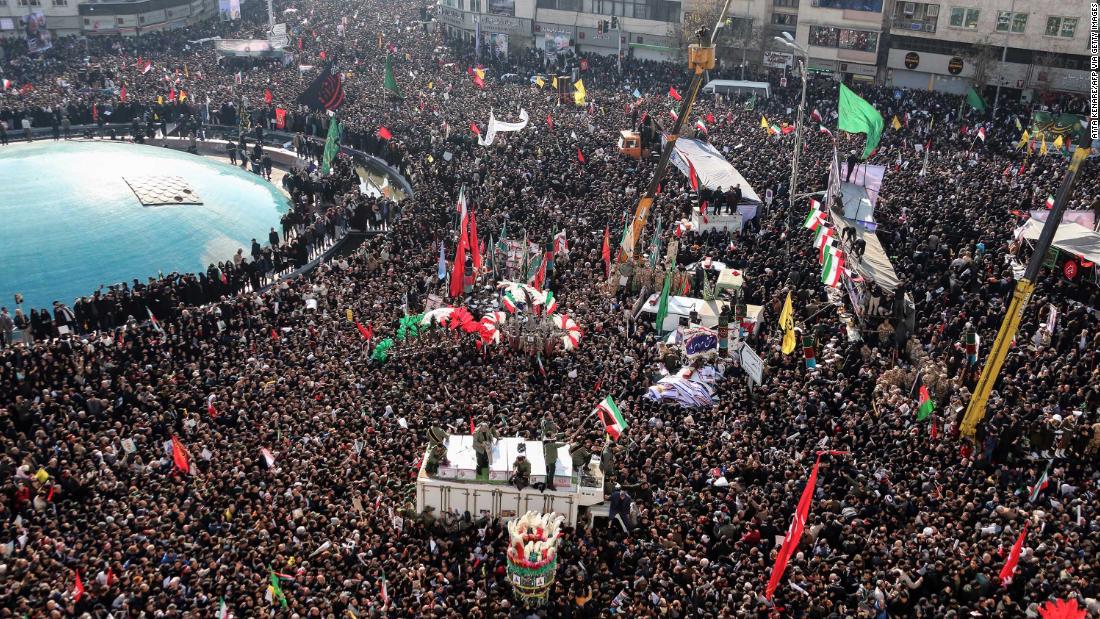 President Trump reiterated his threat to target Iranian cultural sites yesterday evening in a conversation with reporters aboard Air Force One.

Trump's comments came after two senior US officials described widespread opposition within the administration to targeting cultural sites, which could amount to a war crime.

Here's a look at a few of Iran's heritage sites, as designated by the United Nations Educational, Scientific and Cultural Organization:

Iranian General Qasem Soleimani's daughter warned that her father's death "will cause more awakening in the resistance front" and "will bring darker days" for the United States and Israel.

Speaking in front of a large crowd at her father's funeral procession at Tehran University today, Zeinab Soleimani said President Trump's "evil plan to cause separation between two nations of Iraq and Iran" by killing Soleimani and Iraqi militia leader Abu Mahdi Al-Muhandis "has failed."

"Trump, you compulsive gambler, your evil plan to cause separation between two nations of Iraq and Iran with your strategic mistake in assassinating both Haj Qasem and Abu Mahdi has failed and it has only caused historical unity between two nations and their mutual eternal hatred for the United States," Zeinab Soleimani said.

"Hey crazy Trump, you are the symbol of stupidity and a toy in the hand of international Zionists," she added in front of a large crowd at the procession. "This heinous crime committed by the Americans expresses the spirit of criminality and bullying that covers all crimes of bloodshed, especially on the land of Palestine."

Russian Defense Minister Sergei Shoigu had a phone call today with Iran's Chief of Staff of the Armed Forces Mohammad Bagheri to discuss the killing of general Qasem Soleimani, according to state-run news agency TASS.

"During the conversation, the military leaders discussed practical steps to prevent escalation of the situation in the Syrian Arab Republic and the Middle East region in connection with the assassination of General Qasem Soleimani, commander of the Quds special forces unit," the department said.

Last Friday, Russian Defense Ministry called US killing of Soleimani a "short-sighted act” and praised the general for his “undeniable role in the fight against ISIS.

Tehran's streets were packed with black-clad mourners today as a sea of people turned out to pay their respects to Qasem Soleimani, the Iranian general killed by a US drone strike in Baghdad last week.

Many of those on the streets of the Iranian capital were visibly upset and angry; others shouted "down with the USA" and "death to the USA." Iranian state television said millions attended, although this was yet to be verified.

Soleimani has been hailed a martyr and a hero inside Iran, especially due to his work in the fight against ISIS. Iranian Supreme Leader Ayatollah Ali Khamenei, the country's ultimate political and religious authority, was photographed praying over Soleimani's body during the funeral ceremony alongside President Hassan Rouhani. 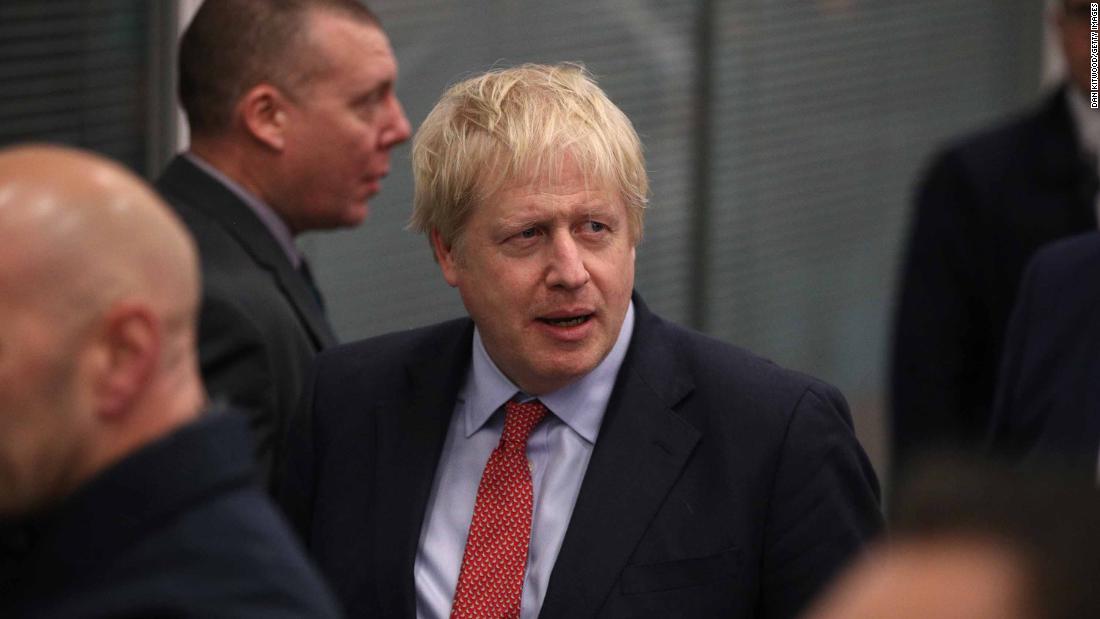 UK Prime Minister Boris Johnson said states have a “right to take action in self defense” following a US drone strike which killed top Iranian military leader Qasem Soleimani in Baghdad on Friday.

“States have a right to take action, such as this, in self defense,” a Downing Street spokesman said, adding that the UK and the US have a “very strong relationship on security” matters.

According to Downing Street, Johnson was in touch with senior officials on Friday and over the weekend following the strike, and spoke with Iraqi Prime Minister Adil Abdul Mahdi today to discuss the de-escalation of tensions in the region.

“The leaders discussed the need to de-escalate tensions in the region following the death of Qasem Soleimani and agreed to work together to find a diplomatic way forward,” Downing Street said in a statement.

The call between the two leaders follows Iran’s announcement that it will begin to enrich Uranium beyond the limitations set out by the the Joint Comprehensive Plan of Action agreement — a development which the Prime Minister has called “concerning,” Downing Street said.

“The nuclear deal is reciprocal and we are urgently speaking to parties about the next steps,” the statement added.

Days after President Trump ordered a drone strike that killed Qasem Soleimani, the powerful commander of Iran's elite Quds Force, the US is bracing for possible retaliatory actions by Iran.

Before the strike, the US had been pushed to the brink of retaliation against Iran or its proxies on multiple occasions, specifically after attacks last summer on oil tankers in the Persian Gulf and oil facilities in Saudi Arabia and Iran's downing of a US drone in June.

Here's how tensions between the two nations have escalated in the past two weeks: